Briefly marinating in a spiced yogurt mixture keeps the chicken in this homemade Indian-inspired recipe tender and juicy, even after charring the exterior for maximum flavor. The star of the show, however, might not even be the chicken. When it comes to Easy Chicken Tikka Masala, it’s all about that creamy, comforting, flavor-packed curry sauce! 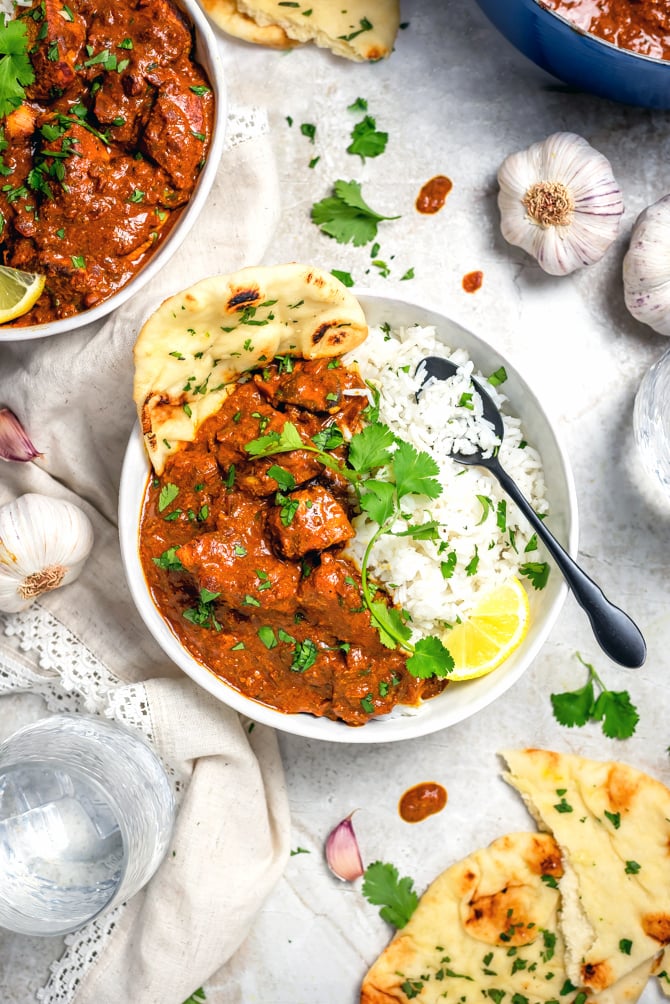 You know when you get REALLY excited for something and you literally cannot stop yourself from talking about it at every opportunity (or even worse, you insert it into conversations that have absolutely nothing at all to do with it)? Yeah, that was me, all week, with this Easy Chicken Tikka Masala. I told the grocery store clerk about it. I talked about it with my neighbors. My dog even got an earful.

I told everyone who would listen that I was working on this recipe, and now that I’ve nailed it, there’s really no stopping me. It’s fantastically rich-tasting, tender, and well-spiced; while also being fresh, healthier, and less expensive than restaurant versions of the dish. Oh, and it takes less than an hour to make from start to finish (including marinating time)! Like I said, there’s no stopping me, so I hope you’re ready. 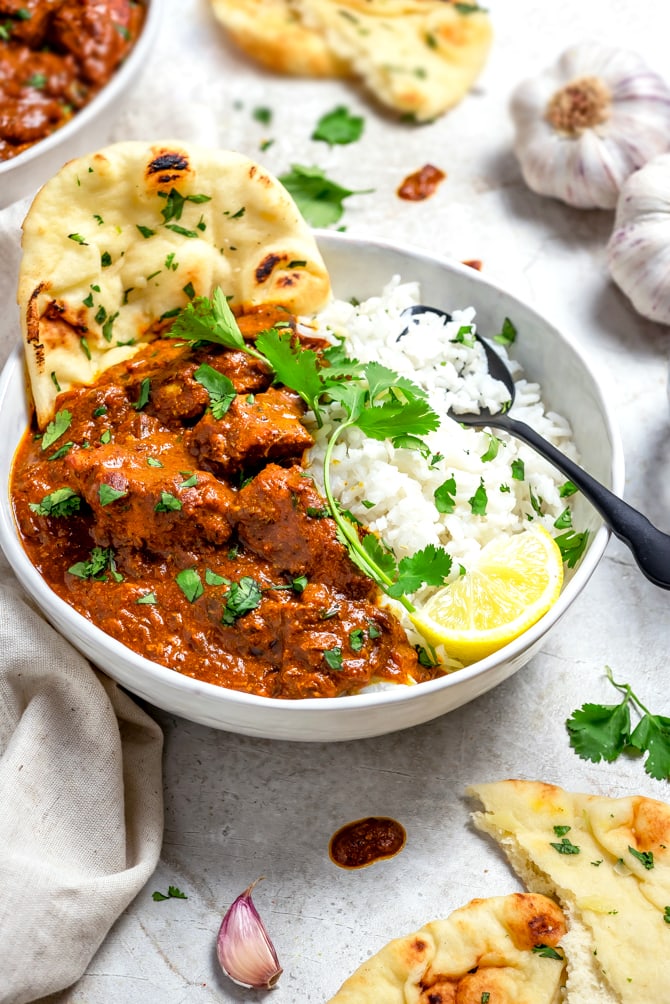 WHAT IS CHICKEN TIKKA MASALA?

A side-effect of rambling about this recipe to anyone within earshot is that I realized just how few people have ever actually tried Chicken Tikka Masala. Actually, a lot of people assumed that I was simply mispronouncing “marsala”!

Unlike Chicken Marsala, which is named after the wine used in the recipe, Chicken Tikka Masala is a dish that consists of chunks of marinated chicken enveloped in a creamy, heavily-spiced, tomato-based curry sauce. It owes its name to that heavily-spiced sauce, as masala is an Indian term for a mixture of spices.

Pre-packaged naan from a grocery store will work in a pinch, but there’s nothing better than warm, fresh, buttery naan. If you want to make your own, this recipe for Homemade Garlic Naan is a must!

Tip: Make the dough ahead, separate it into balls, and freeze them individually to defrost later and make fresh naan any time you make your Easy Chicken Tikka Masala! 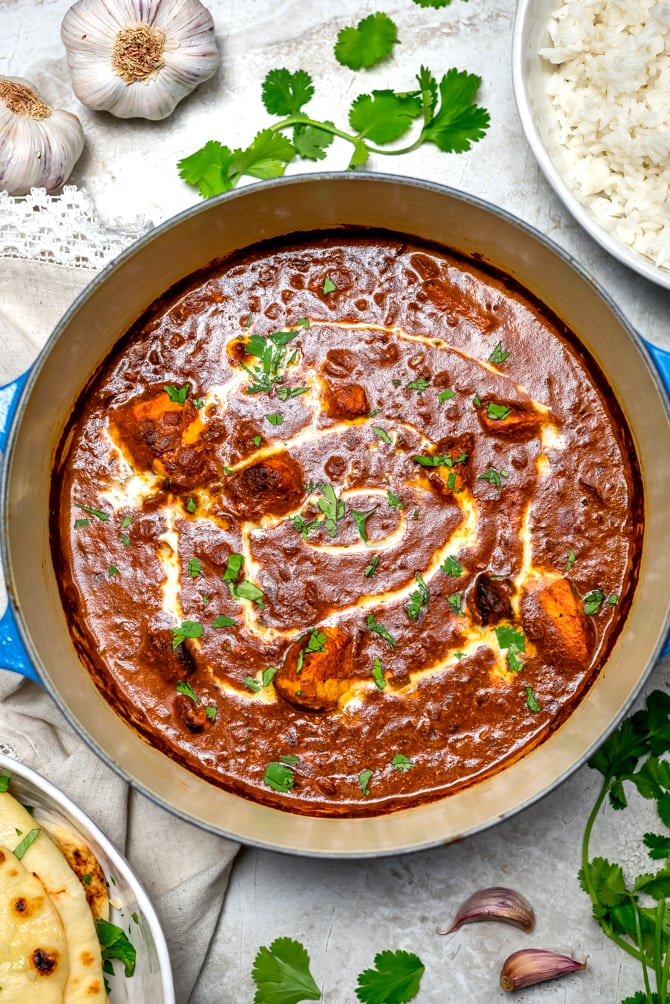 WHAT’S THE DIFFERENCE BETWEEN BUTTER CHICKEN AND CHICKEN TIKKA MASALA?

The thing that really surprised me about the two was learning that Butter Chicken (also known as Tikka Makhani) is authentically Indian in origin, while Chicken Tikka Masala is most likely not. With a name like Butter Chicken, I definitely would have thought the opposite!

BUT WAIT! WHERE DID CHICKEN TIKKA MASALA ORIGINATE, THEN?

It’s undeniable that Chicken Tikka Masala is inspired by Indian cuisine, but the dish itself was probably not a traditional Indian recipe.

While no one knows for sure just how it originated, there are definitely some highly-accepted theories. Many food historians believe that the recipe was created by Bangladeshi migrants who opened “Indian” restaurants and tweaked traditional dishes to appeal to the British. Others believe that it was invented by a Pakistani chef in Glascow, Scotland, when he attempted to salvage a dry curry by adding tomato soup to the recipe. Some think that’s all ridiculous and that Chicken Tikka Masala was first created in India, after all. Regardless of what you believe, it’s become one of the United Kingdom’s most popular dishes. So much so that if you look up “national dishes of the UK”, Chicken Tikka Masala will be the first that pops up! And that popularity is slowly but surely spreading to the US. 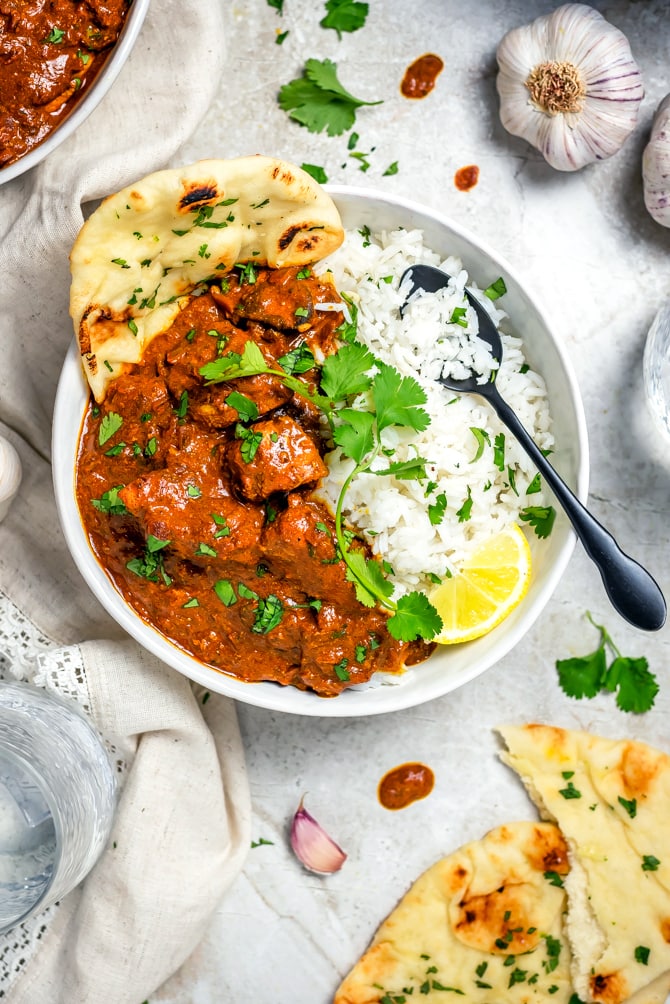 There’s just as much debate about how to properly make Chicken Tikka Masala as there is about where it was first created. However, most will agree that authentic Chicken Tikka Masala always involves a clay oven called a tandoor. Usually, chunks of marinated chicken are threaded onto skewers and cooked in a tandoor until charred and cooked through before they’re added to a curry sauce.

But I don’t own a tandoor, and I imagine most people reading this recipe don’t either. That doesn’t mean we can’t make do with what we have!

This Easy Chicken Tikka Masala is a simplified version of the classic dish, made to come together in under an hour and to be made without the use of a tandoor.

Just like with more traditional versions, this Easy Chicken Tikka Masala starts with chunks of chicken that we marinate in a mixture of yogurt, garlic, ginger, and spices. You can easily make the marinade the night before cooking or in the morning before work and let the chicken sit, but just 15 minutes is all you really need to make a difference with tenderizing and flavor, so no worries if you want to make this all when you get home and just get it done.

After browning the chicken and getting a nice char on it, I set the chicken aside and saute chopped onion, more garlic, more ginger, and more spices for extra flavor. Then, I pour in the tomato sauce. By lightly scraping the pan as I stir in the tomato sauce and let it cook, I’m able to lift the browned bits from the chicken, yogurt, and spices that have attached to the bottom of the pan and infuse the sauce with their flavor.

Finally, I add the chicken back in and pour in coconut milk, and let it all cook together. The chicken will be almost fall-apart tender and the sauce will be thickened when it’s ready to serve! 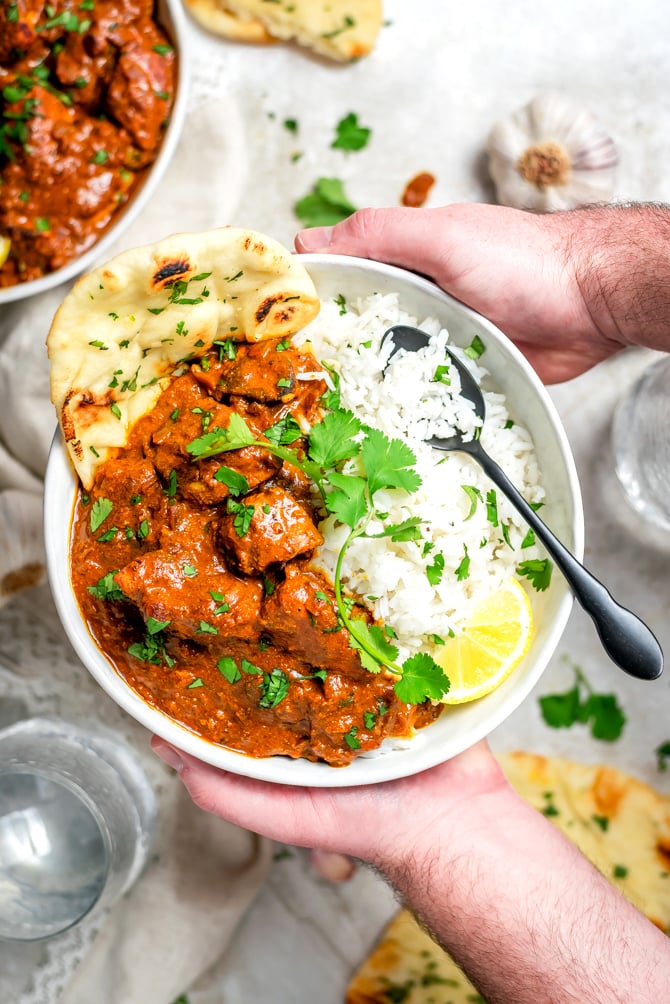 For the spice mixture:

For the Chicken Tikka Masala: