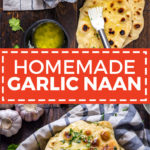 Homemade Garlic Naan. Even if you’ve never made bread at home before, this soft, chewy, garlicky flatbread is easy to make and well worth the effort. You’re going to love serving it with your favorite Indian dishes. 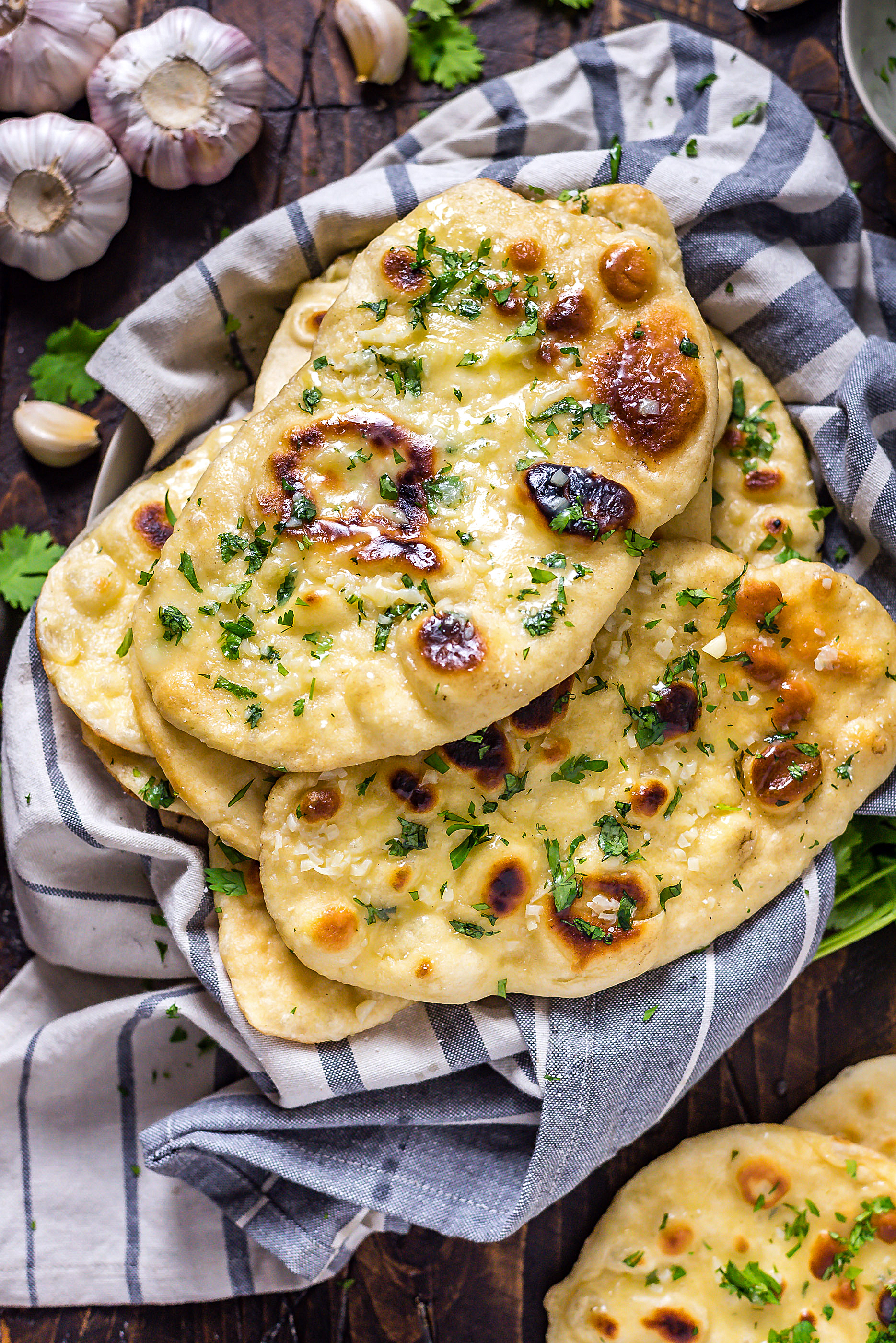 If I could craft an idyllic version of myself– we’ll call her Dream Morgan– she’d be the sort of woman who woke up on the first blare of her alarm, who started her day with a long run (and enjoyed it), who answered all of her emails in a timely manner, and who never once let a dish sit in the sink overnight. You know, in a perfect world. She’d also be the type of lady to labor over a mother dough and bake her own bread each week, plus a few extra loaves for her neighbors.

But here we are. 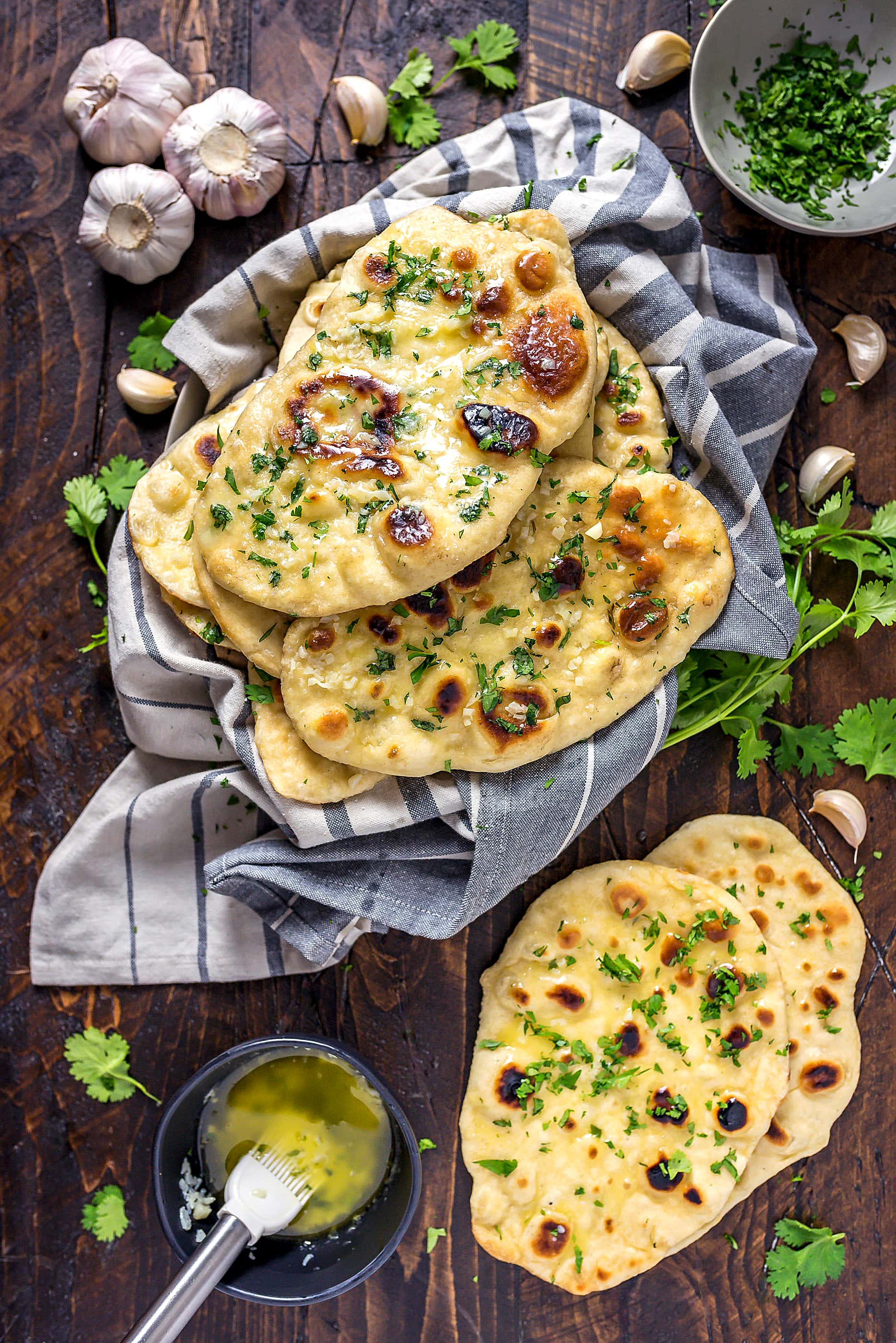 I spent seven years of my life flipping pretzels for a living– or at least as much “for a living” as you can get working part-time while going to school– which means that I’ve been working with yeast and dough since I was still wearing braces. Still, to me, homemeade sourdoughs and brioches are like the “we need to talk” of the culinary world. Crazy intimidating.

However, I can make a damn good flatbread without breaking a sweat, because it’s nearly impossible to do it wrong. And my favorite of all flatbreads? It’s naan. 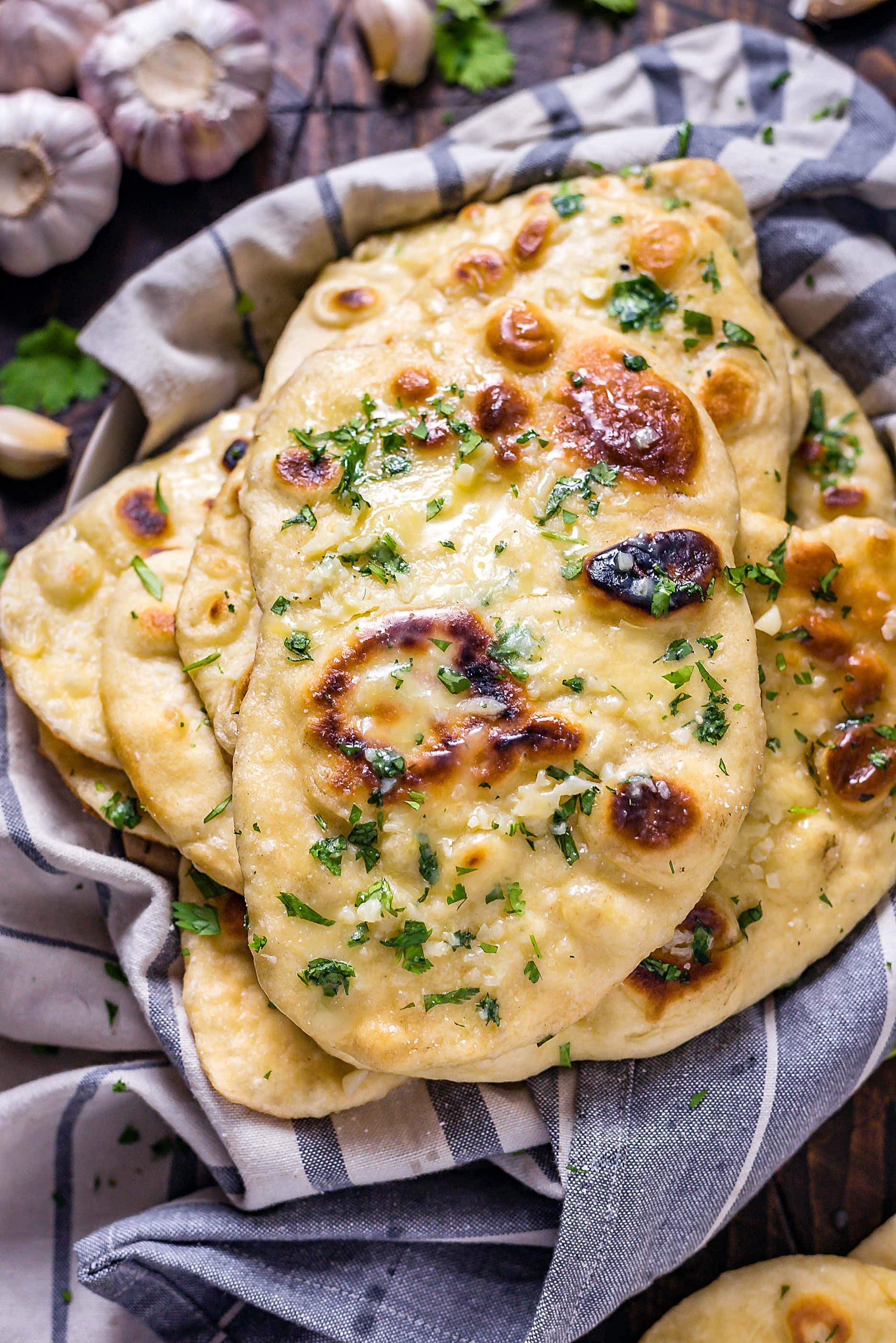 If you’ve never had it before, naan is a slightly leavened type of Indian flatbread that bears some similarities to pita bread. However, naan uses yogurt and milk in the dough, which makes it softer and chewier than pita. When slathered in a garlicky butter mixture, it’s one of my favorite parts of Indian cuisine.

I’ve always wanted to make Homemade Garlic Naan so that I don’t have to go out to enjoy it (and I could serve it with some of my favorite Indian-inspired recipes like Sheet-Pan Tandoori Chicken & Vegetables and Slow Cooker Indian-Spiced Lentils) but the fact that it’s traditionally baked in a clay oven makes it sound more like a job for Dream Morgan. Dream Morgan definitely has a tandoor.

Recently, though, I realized that you can still get the same fluffy, slightly charred results with the help of a hot skillet– no tandoor necessary. So recently I’ve been eating a WHOLE LOT of naan. 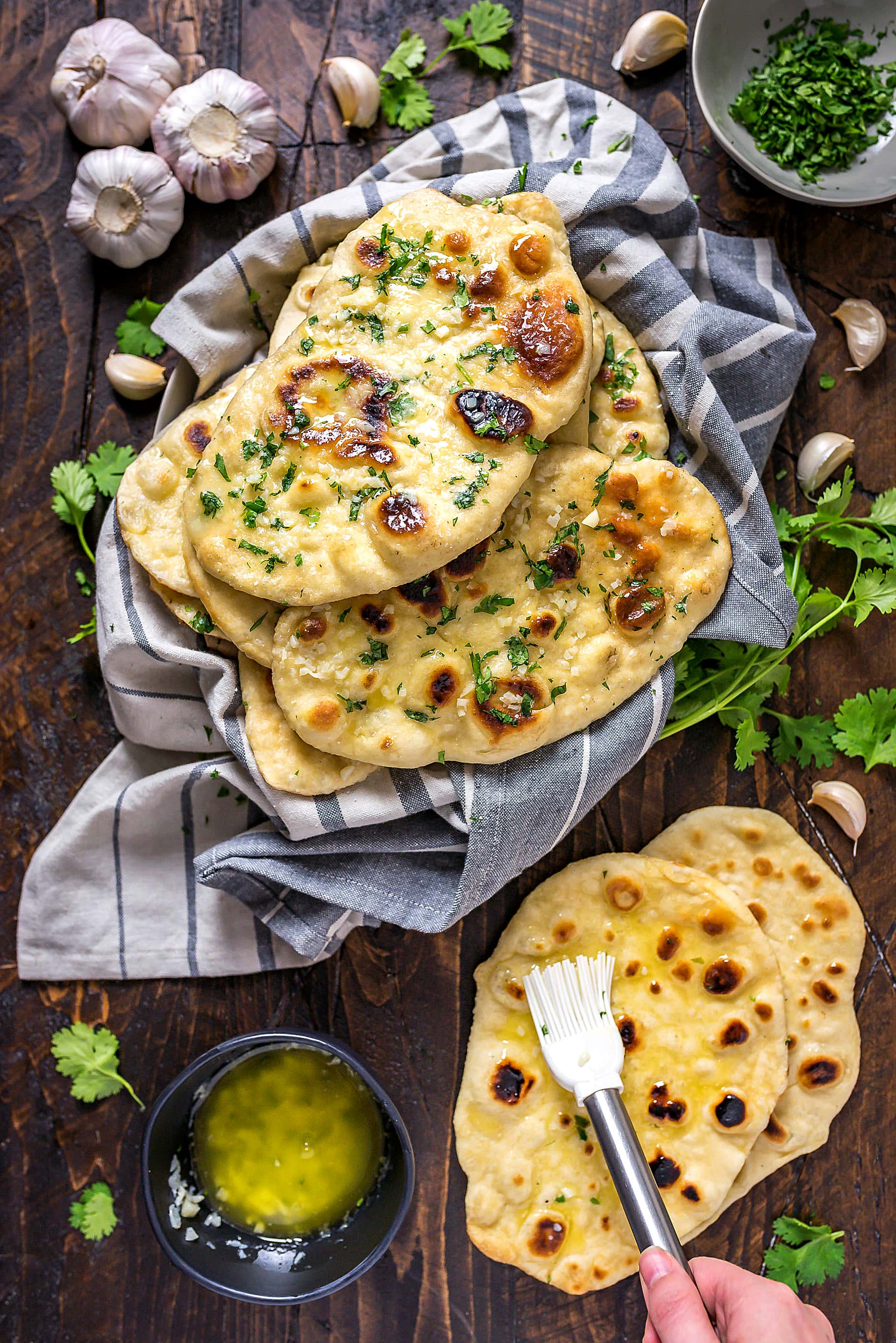 The recipe is simple and hard to mess up. Even the messiest, most misshapen pieces of dough will still puff up and be delicious. And everything is beautiful when it’s brushed with garlic butter. Everything.

So even if you’re afraid of baking your own bread, this Homemade Garlic Naan is one recipe you should push yourself to try. You’ll be so glad you did when you’re using it to sop up sauce, cradle your favorite sandwich fillings, or just plain devour fresh out of the pan. If you’re anything like me, you’ll be doing a lot of the last one. 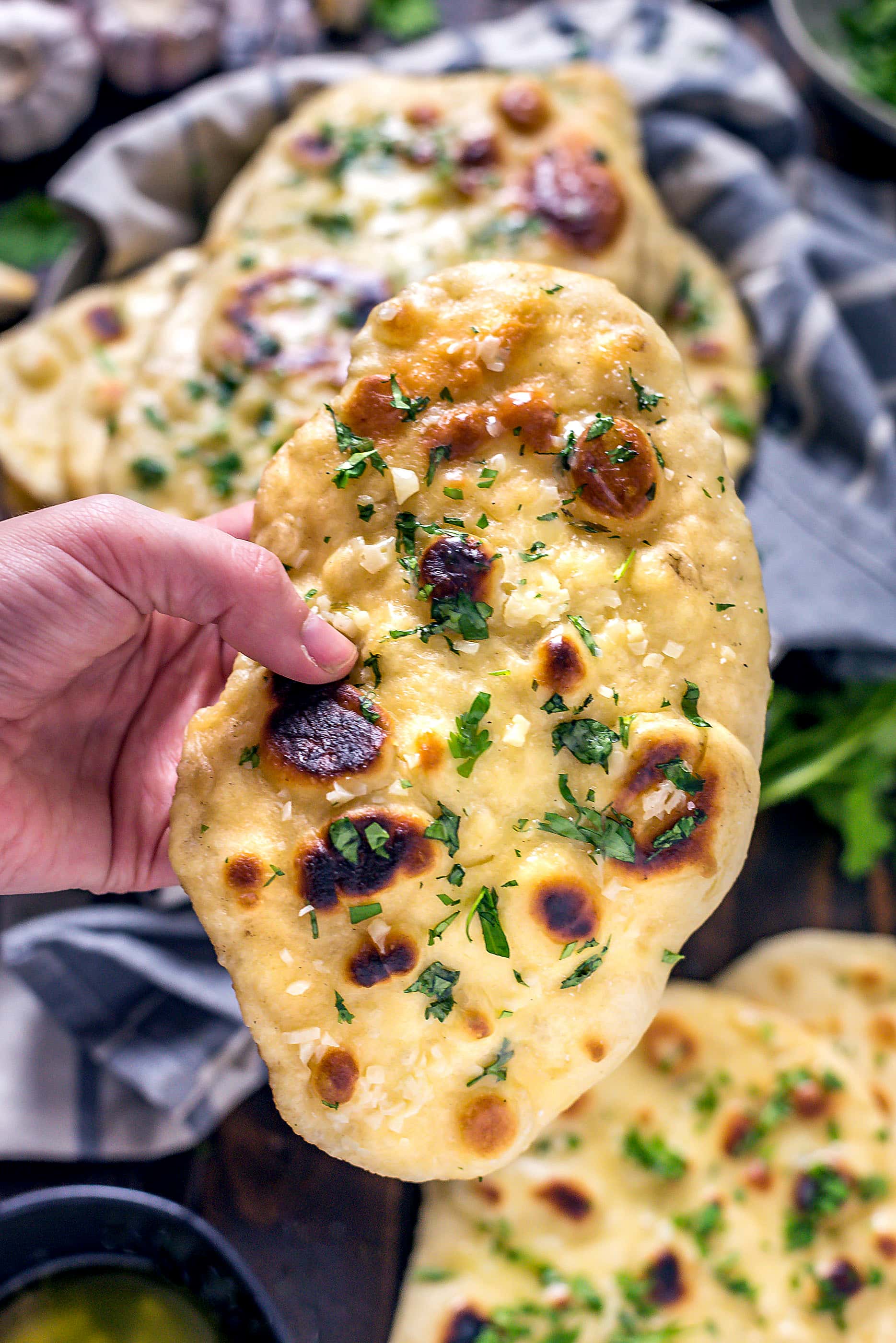