Honey Buttermilk Cornbread. This tender and sweet cornbread makes the perfect side for a summer BBQ or Thanksgiving dinner. 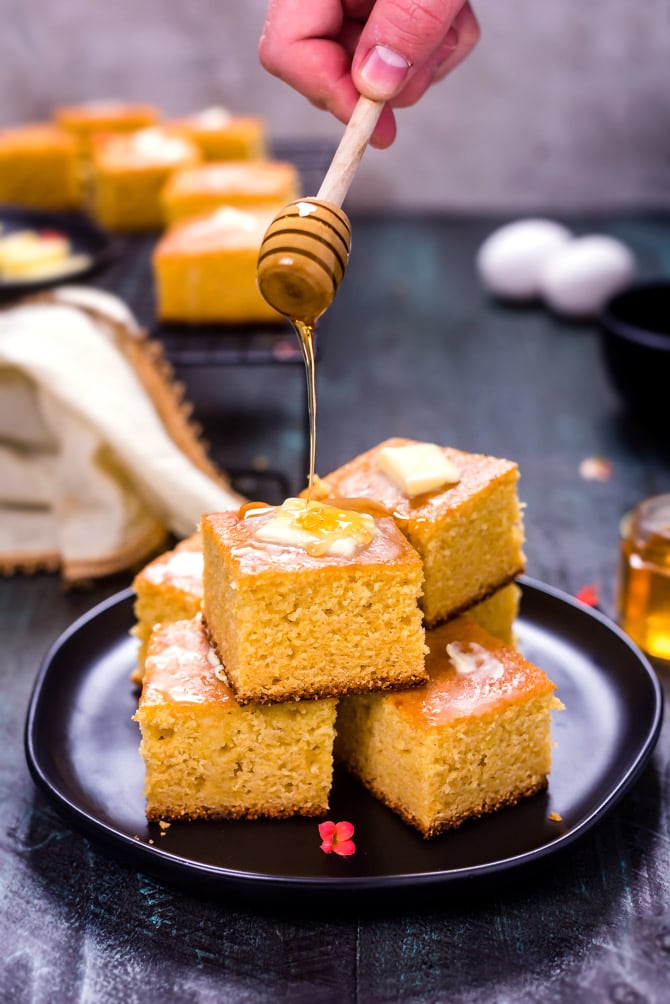 I’m just going to start off by saying that this is a judgment-free blog, and that if you happen to find yourself snacking on giant, butter-slathered slices of cornbread until your lap is covered in crumbs and you’ve ruined any plans you had for dinner, I may or may not be able to relate. And if you realize that you’ve eaten far too much of the cornbread that you specifically baked so that you could use it in homemade stuffing… again, I might know a thing or two about that. Oh, and if you and your boyfriend (and, let’s be honest, your dog) look longingly at the lone remaining piece, contemplating how much your love for each other truly means and if you are willing to sacrifice the last slice in the name of it, well, you probably made this Honey Buttermilk Cornbread. Because it is that good. 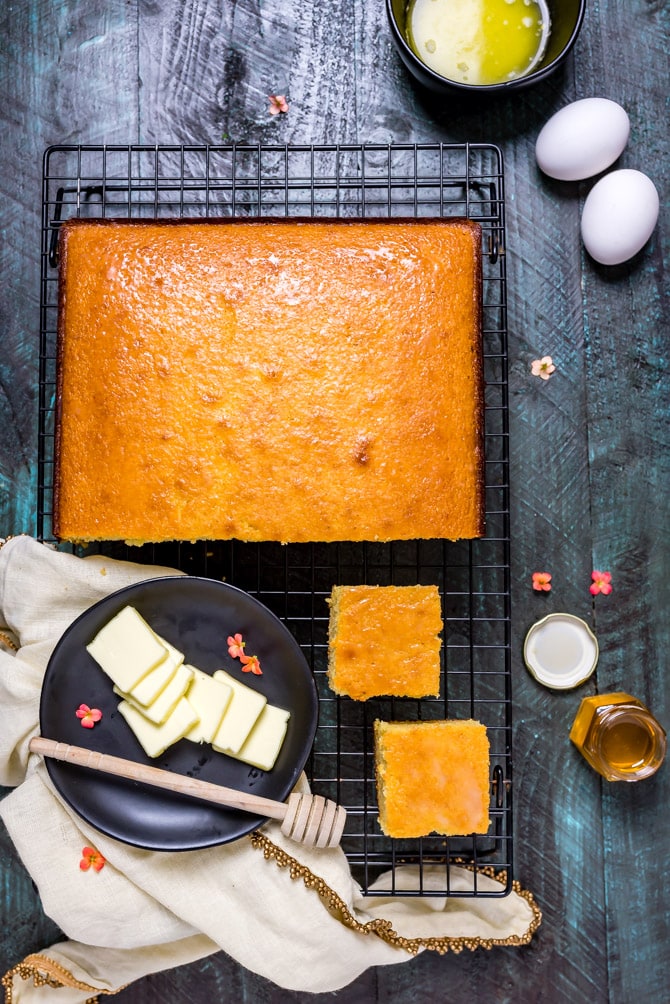 I see a forecast of partly disgruntled readers with a 100% chance of snarky social media comments about my decision to make sweet cornbread. And I get it. I’ve talked at length on this blog about regional and cultural authenticity, and how that can prove to be a sore spot for people who have grown up eating a dish “the right way”. But there’s a long history behind the “sweetened vs. unsweetened” debate, and no matter where you lie in your allegiance, you’re not wrong.

According to Kathleen Press of the Charlotte Observer, when cornbread was first made, it wasn’t sweetened. In fact, very few bread recipes were– sugar was a very valuable commodity in the south. Instead, sweeter white cornmeal was used, and molasses was often drizzled on top for those who enjoyed a little extra sweetness. 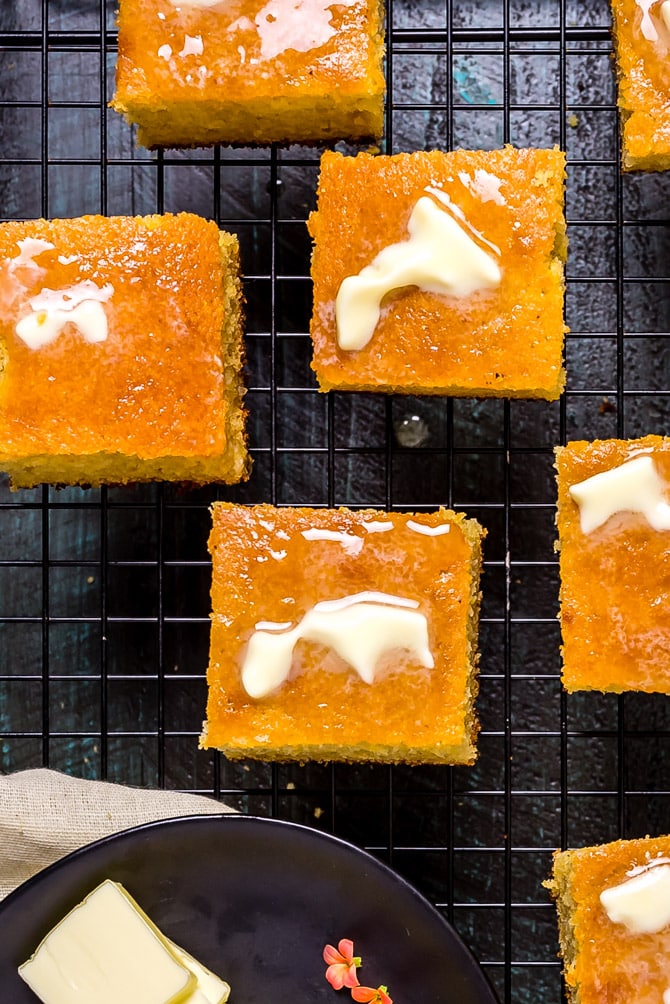 However, when industrial milling was introduced, less expensive cornmeal began to be made with yellow corn that was harvested before it was ripe (and therefore, far less naturally sweet). As a result, many people– especially black cooks who, though free, were forced to live in desperate rural poverty– switched to the more affordable, mass-produced cornmeal and began to add sugar to their recipes to get the proper flavor and rise. Eventually a taste for increasingly sweetened cornbread developed amongst black Southerners, as was incrementally documented in the cookbooks of the times. For the most part, white Southerners continued to make their cornbread the unsweetened way, with white cornmeal.

In the early-to-mid 1900s, “The Great Migration” occurred, in which more than six million African-Americans moved north for better opportunities. They continued to make cornbread the sweetened way, especially due to the fact that industrial-milled cornmeal was all that would be available in the north. And that is how the “sweetened cornbread isn’t real Southern food” argument began.

Race played a large part in the divide between sweetened and unsweetened cornbread, but these days, it mostly comes down to personal preference, and as I said, there’s no wrong answer. Unsweetened white cornbread with a crumbly bake absolutely has its merits and is still very popular in the south. However, I tend to fall more on the sweet side of the spectrum– and so my most favorite cornbread (this Honey Buttermilk Cornbread) is sweetened with both honey and granulated sugar. 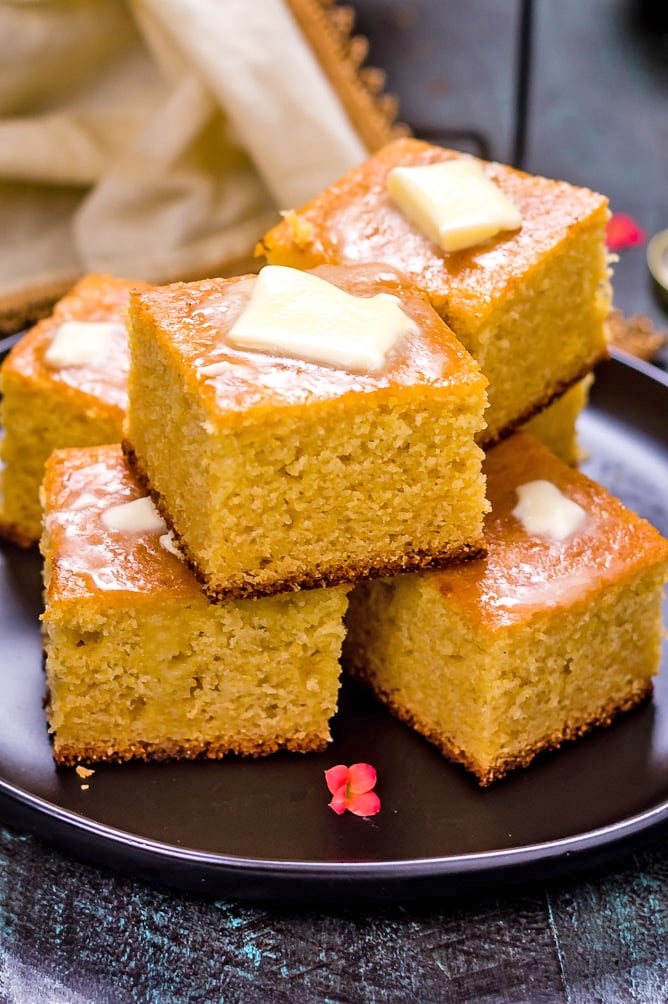 HOW DO YOU MAKE HONEY BUTTERMILK CORNBREAD?

Now that we all know the history behind sweetened cornbread, the real question is how to make it. A lot of us are familiar with Jiffy box mixes, but honestly, from-scratch cornbread is almost just as easy.

To start, combine the wet ingredients: the butter, sugar, honey, eggs, and buttermilk. It’s important to use buttermilk here rather than regular milk, both for flavor and to ensure that the acids in the buttermilk react with the baking soda to produce carbon dioxide gas, which makes the bubbles that allows the bread to rise. Don’t be tempted to substitute!

Next, it’s time for the dry ingredients. Whisk together flour, cornmeal, salt, and baking soda. Gradually add it to the wet ingredients, a bit at a time. This prevents clumping.

Pour the batter into a greased baking dish and bake until it’s golden and cooked through. Then brush it with plenty of melted butter while it’s still warm. Yum.

It’s as simple as that! 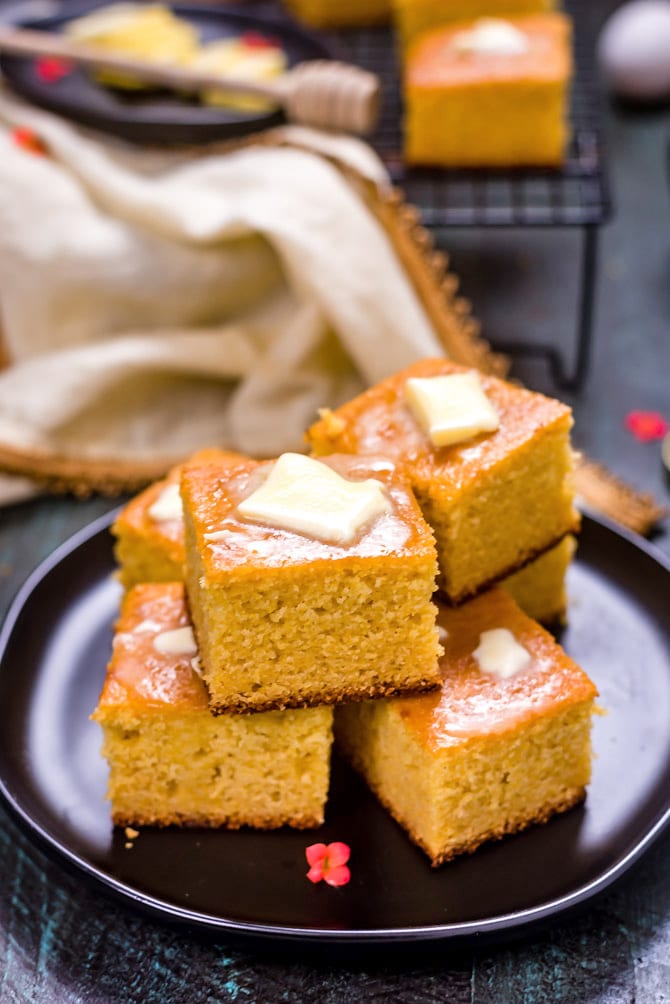 WHAT TO SERVE WITH CORNBREAD

I specifically made this Honey Buttermilk Cornbread to use in stuffing, but as a cornbread fanatic, I’ve got you covered for year-round suggestions.

Can you think of any other ideas of what to serve with Honey Buttermilk Cornbread? If so, let me know in the comments!