This hummus recipe breaks out all of the tricks for a delicious, almost impossibly smooth and creamy dip (without the hassle of soaking the chickpeas overnight or– even worse– peeling the skins one by one)! Not only is the hummus easy to make, but it also tastes significantly better than the store-bought stuff. 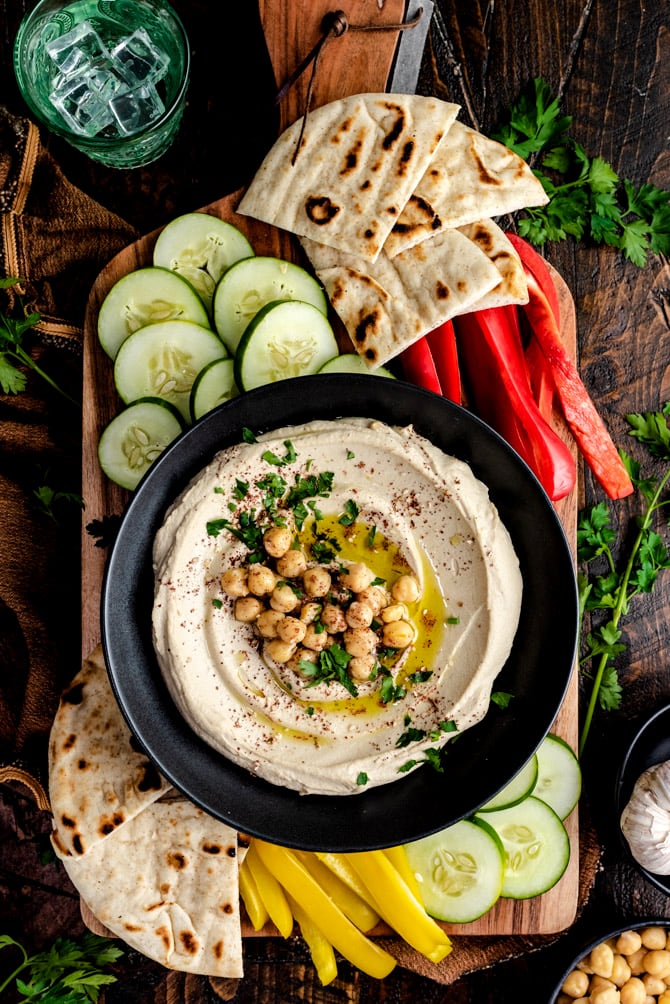 There was a time, not too long ago, when I proclaimed that I’d learned the best hummus recipe ever and that I’d never make it another way again.

The recipe was Michael Solomonov’s Hummus Tehina from his cookbook Zahav, and it was honestly ethereal hummus. I wasn’t lying when I said that. However, the whole “I’ll never make hummus another way” thing? Well…

See the thing is that I am an impatient person. I know that many recipes won’t give you the same results if you take a few liberties and short-cuts, but that doesn’t mean I won’t try and see if I stumble upon some lucky hack.

What do they say about that again? Laziness breeds ingenuity?

It’s a damn good thing, too, because despite the so-called “common knowledge” that the best hummus comes from the dried and rehydrated stuff, I wound up making the creamiest, most luxurious hummus I’ve ever eaten from canned chickpeas. 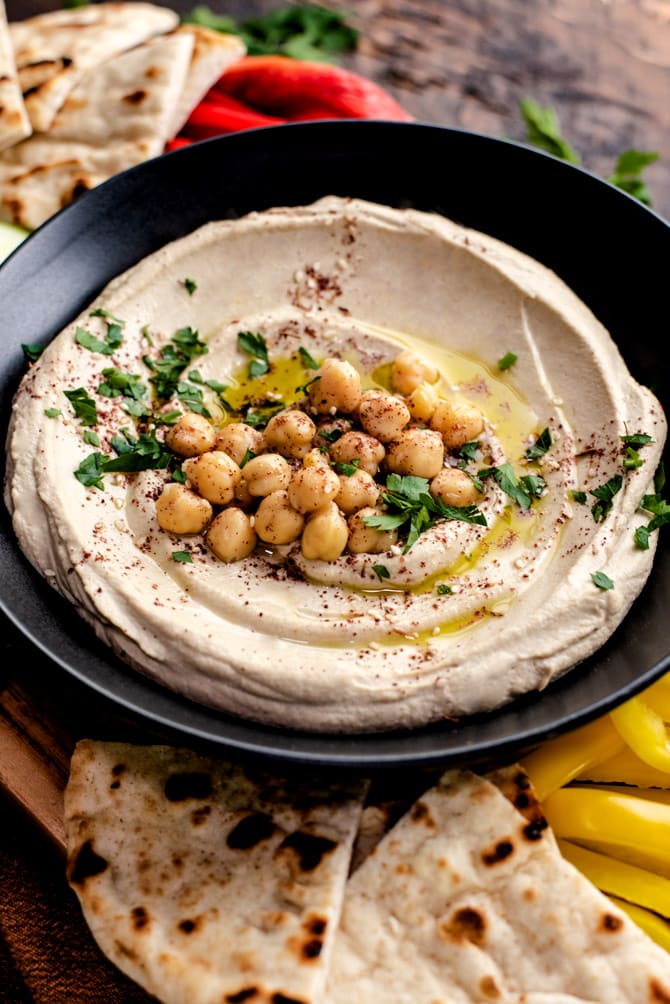 There is one obvious benefit to using canned chickpeas rather than dried chickpeas:

You don’t have to let your chickpeas soak overnight for hummus the next day when using canned chickpeas. If you want easy hummus, you can have it now. Additionally, the time required for the chickpeas to cook to the proper mushy consistency is exponentially less with canned chickpeas, which have been pre-cooked.

Canned chickpeas taking less time is kind of a given. However, many people would be surprised to know that canned chickpeas also gave much smoother results. In side-by-side tests, I actually found that it was much easier to get smooth, silky hummus using canned chickpeas.

Part of this is– as I mentioned before– due to the fact that they are pre-cooked, so they are further along in the softening process from the get-go. However, they also spend months sitting in brine, which is both able to permeate the skins over time to add more moisture into the chickpea itself, and helps to break down and soften the skin itself, aiding in the eventual blending of the skins into a smoother hummus.

THE DRAWBACKS OF CANNED CHICKPEAS.

I can’t talk up canned chickpeas without also pointing out that they do have a couple of negative aspects as well.

First of all, the canning process does result in them having a slightly more muted flavor than their dried-and-soaked counterparts. They’re a bit less nutty, which is part of the reason why I generally don’t use canned chickpeas for everything. However, when it comes to hummus, tahini– the sesame seed based paste– supplies ample nuttiness to make up for anything that you might perceive as less intensified with the chickpeas themselves.

Canned chickpeas can also take on a metallic flavor from the can, much like with most canned vegetables. That being said, rinsing the chickpeas thoroughly a few times before using them and again after boiling will rid them of that flavor. 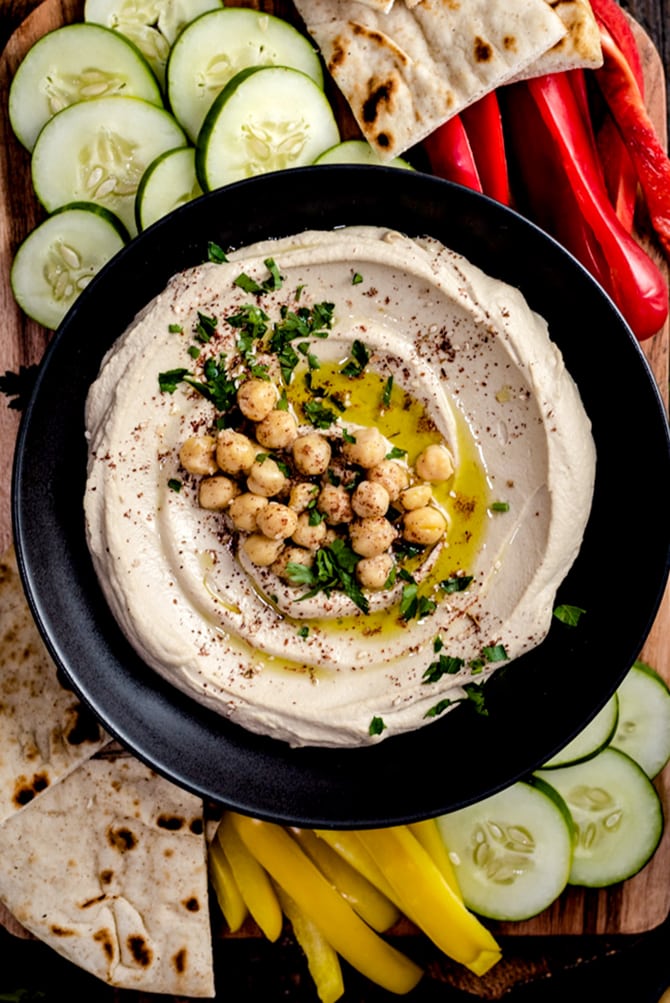 HOW TO MAKE THE SILKIEST, SMOOTHEST HUMMUS

If you want to, you can certainly individually remove the skins from each chickpea for a nice, creamy hummus. But who wants to take that kind of time? Especially if you’re making a large batch. Instead, I rely on two things:

Even pre-cooked, canned chickpeas benefit massively from boiling. We’re not afraid of overcooking them, rather, we want them to get as mushy as possible so the hummus can be as smooth as possible. It takes roughly 30 minutes for the chickpeas to get to the point where they’re completely falling apart, which is exactly what we want.

Simply boiling the chickpeas on their own will help, but I like to add a bit of baking soda to the mix. I learned this tip from Michael Solomonov, whose recipe calls for using baking soda twice (both in the soak and the boil).

The baking soda works by making the water more alkaline, which breaks down pectic bonds to soften the chickpeas –especially the skins– much more effectively than boiling alone.

Be sure not to use an aluminum pot, however, as aluminum will react with baking soda.

Oftentimes chunks in hummus aren’t from undercooked chickpeas or raggedy chickpea skins at all. They can actually from chunks of raw garlic, which don’t puree and incorporate as smoothly as the cooked chickpeas and tahini. The easy solution is to boil the garlic right along with the chickpeas.

Boiling the garlic not only softens the cloves so they can be pureed, but also will mellow their sharp, pungent flavors. This is because cooking garlic destroys the allicin, which is a sulfur-containing molecule. Don’t worry, your hummus will still taste garlicky enough, it just won’t be that super sharp and overwhelming raw garlic flavor.

My last tip for the smoothest hummus? Throw a couple of ice cubes in to your blender or food processor.

Due to its chunkier shape, the ice incorporates extra air into the hummus mixture as it breaks apart, giving the hummus more of a “whipped” texture. It simultaneously adds water, which thins the chunkier chickpea and tahini combo and lowers the temperature as it blends which keeps the hummus from separating. Not to mention, it also gives the final dip a brighter, lighter color which is a hallmark of good hummus! 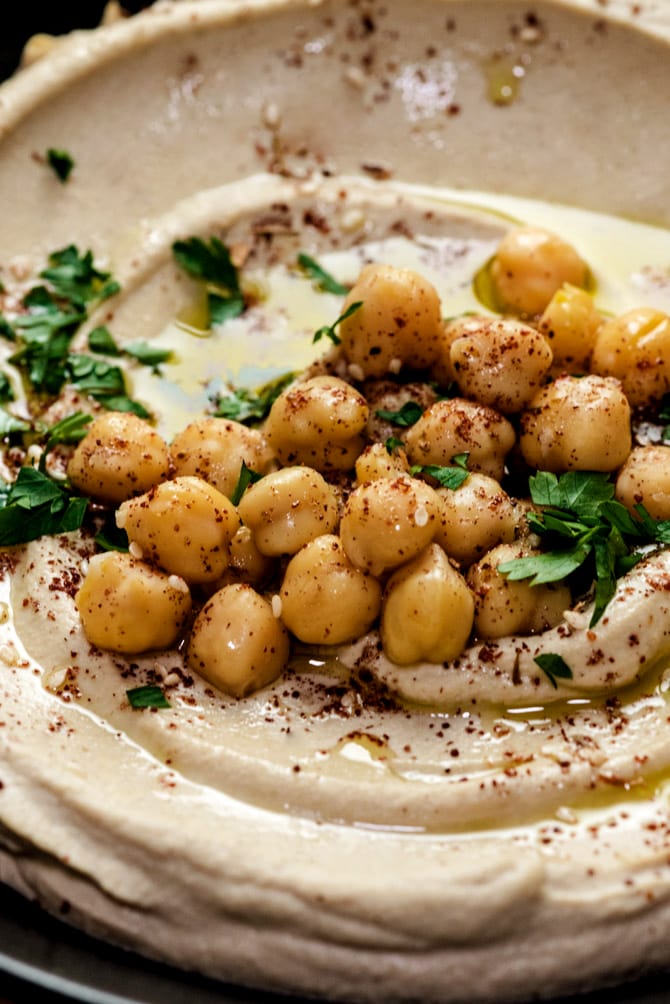 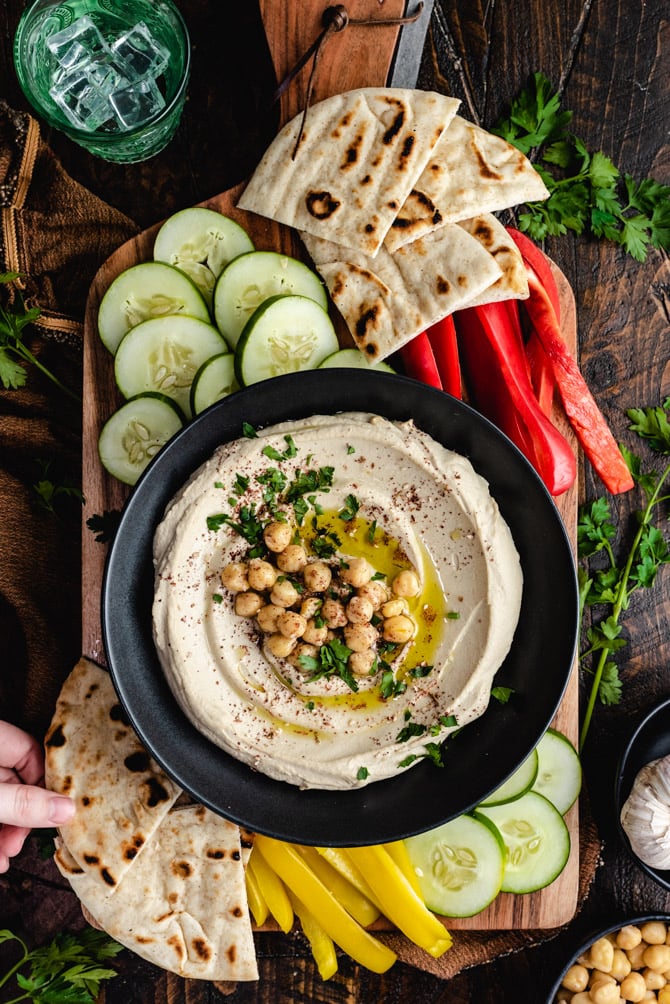 The hummus will last in an air-tight container in the refrigerator for up to 1 week.