Hummus Fries with Spicy Tahini Dip. These fritters are made with chickpea flour and tahini for a crisp-exteriored snack with a custardy, hummus-like center.

This recipe for Hummus Fries with Spicy Tahini Dip has also been featured on Serious Eats. 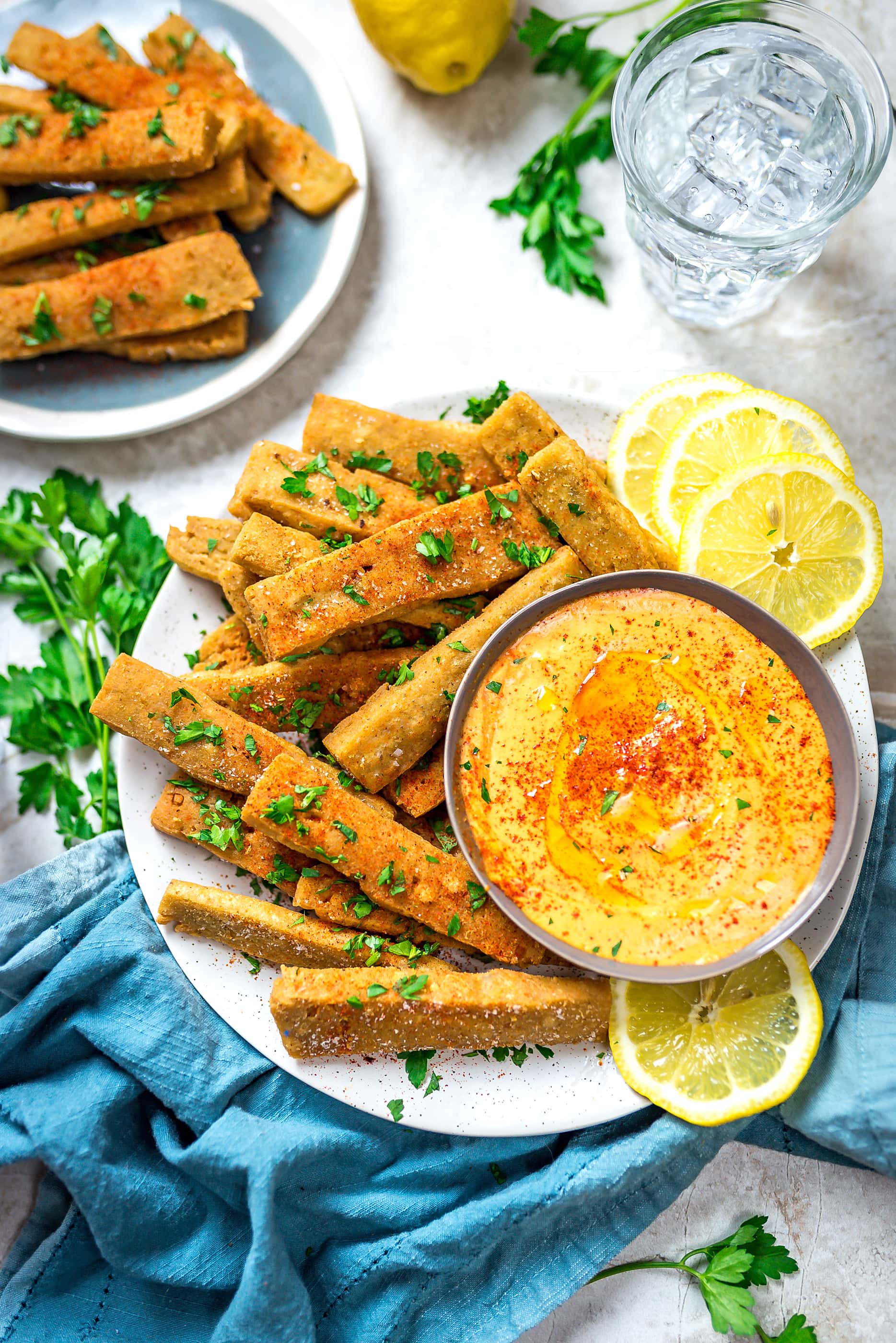 The scribbled words “PANISSES – TECHNICALLY FRENCH FRIES” caught my eye at the food truck festival last year. I hesitantly kept walking, surveying the sea of chalkboard menus that were displayed by each vendor, watching happy patrons dig into of their fusion tacos and liquid nitrogen ice creams. But my mind kept going back to the panisses. Technically French fries? What does that even mean?

I later discovered (as I cradled a hill of hot panisses in a flimsy paper tray) that they actually are chickpea flour fritters that are sort of shaped like very thick fries. Technically French fries, sure, since they hail from the South of France and are fried, but definitely not what I was expecting.

Don’t think for a second that that means I’m complaining, though. I loved every bite. The exterior was thin and crisp and gave way to a creamy interior that almost reminded me of a less flavorful version of hummus. And that’s the story of how, a year ago, I became utterly obsessed with the idea of Hummus Fries. 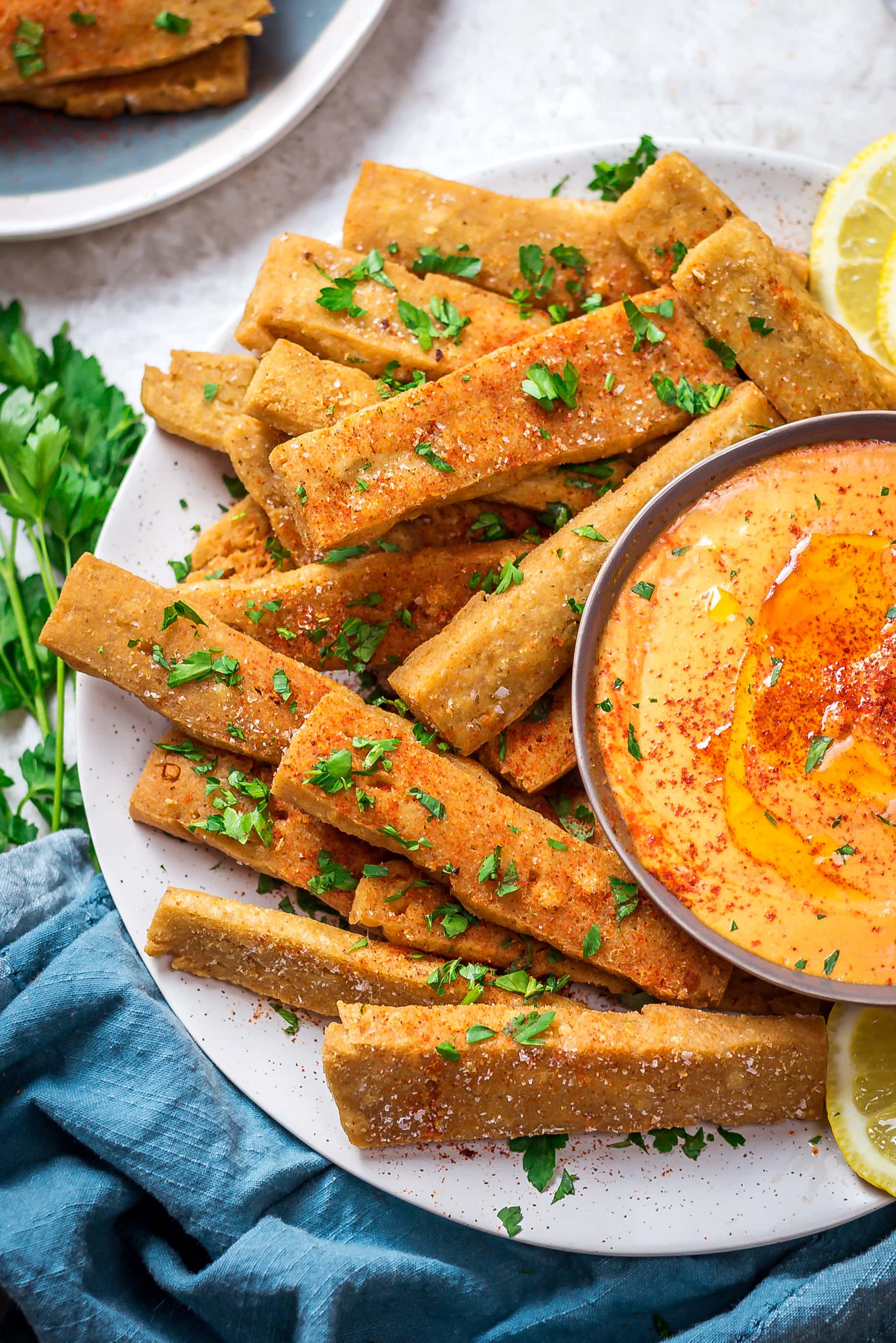 Can I just take a minute to talk about how mad I am that it still took me a whole year to attempt this recipe?

I was intimidated at the idea of making them, convinced that they couldn’t possibly work the way I imagined– that they wouldn’t fry up right or that the texture would be all wrong. I thought I needed to research it more. And no matter how much I researched, I still thought I wouldn’t be able to nail it.

And at first, I was right. When I finally forced myself to give it a go, I failed several times– either the chickpea mixture was too thin to solidify and fry well, or the flavor was off. But something told me to keep trying, and once I got the proportions right, the Hummus Fries were more amazing than I imagined. The flavor and texture of the insides were undoubtedly hummus-like, though perhaps a tiny bit thicker and more custardy, and the exterior was beautifully crisp and surprisingly sturdy, eliminating any need for a dipper. The Hummus Fries were the dipper. 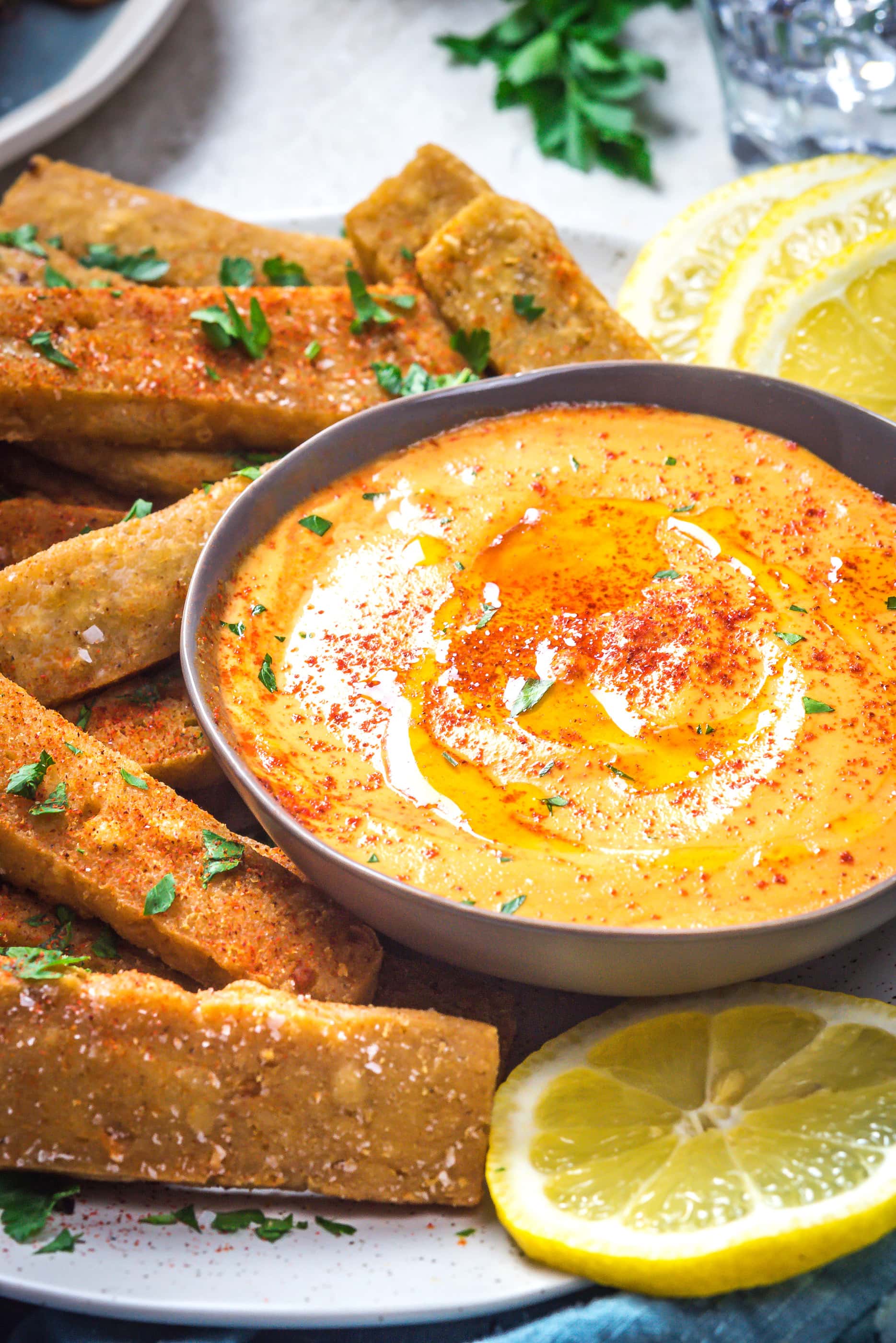 Because the hummus fries are soft and hummus-like inside, you really don’t need a dip. They are 100% amazing on their own and you definitely don’t want to overshadow all of their flavor. However, it felt wrong serving fries with nothing to dip in. Ketchup wouldn’t do, nor would anything oil-based. Instead, a little extra tahini with garlic and hot sauce for a kick was perfect for a tahini-lover like me.

I credit Michael Solomonov’s Hummus Tehina with igniting my love for excessive amounts of tahini with my hummus, by the way.

If you want to make it a little less heavy, adding plain yogurt and/or herbs is a great way to lighten it up a little. Or like I said, just devour them on their own. They’re amazing either way. 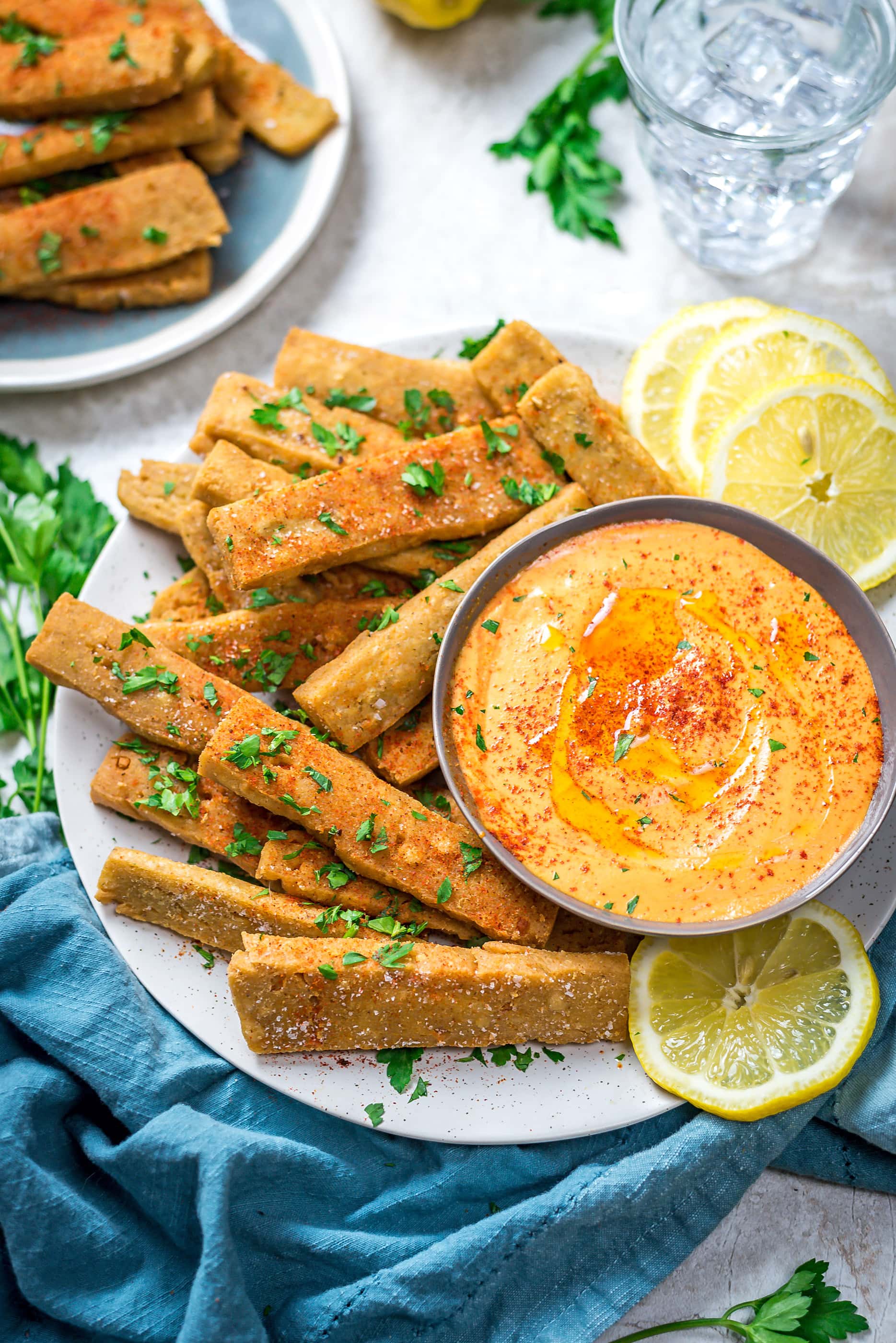 I saved some fries to share with my brother, who is even more hummus-obsessed than I, and who tries to stick to a vegan diet as much as possible. (Yes, these do happen to be vegan-friendly, by the way!)

They froze and reheated surprisingly well, but I have to say that they’re nowhere near as amazing when reheated (or even after cooling down) as they are right after frying.  If you really want to wow ’em, you’ve gotta serve ’em hot and fresh.

Not gonna lie though, I ate a whole lot of those reheated ones too. Hummus Fries and Spicy Tahini Dip is just too good to resist. 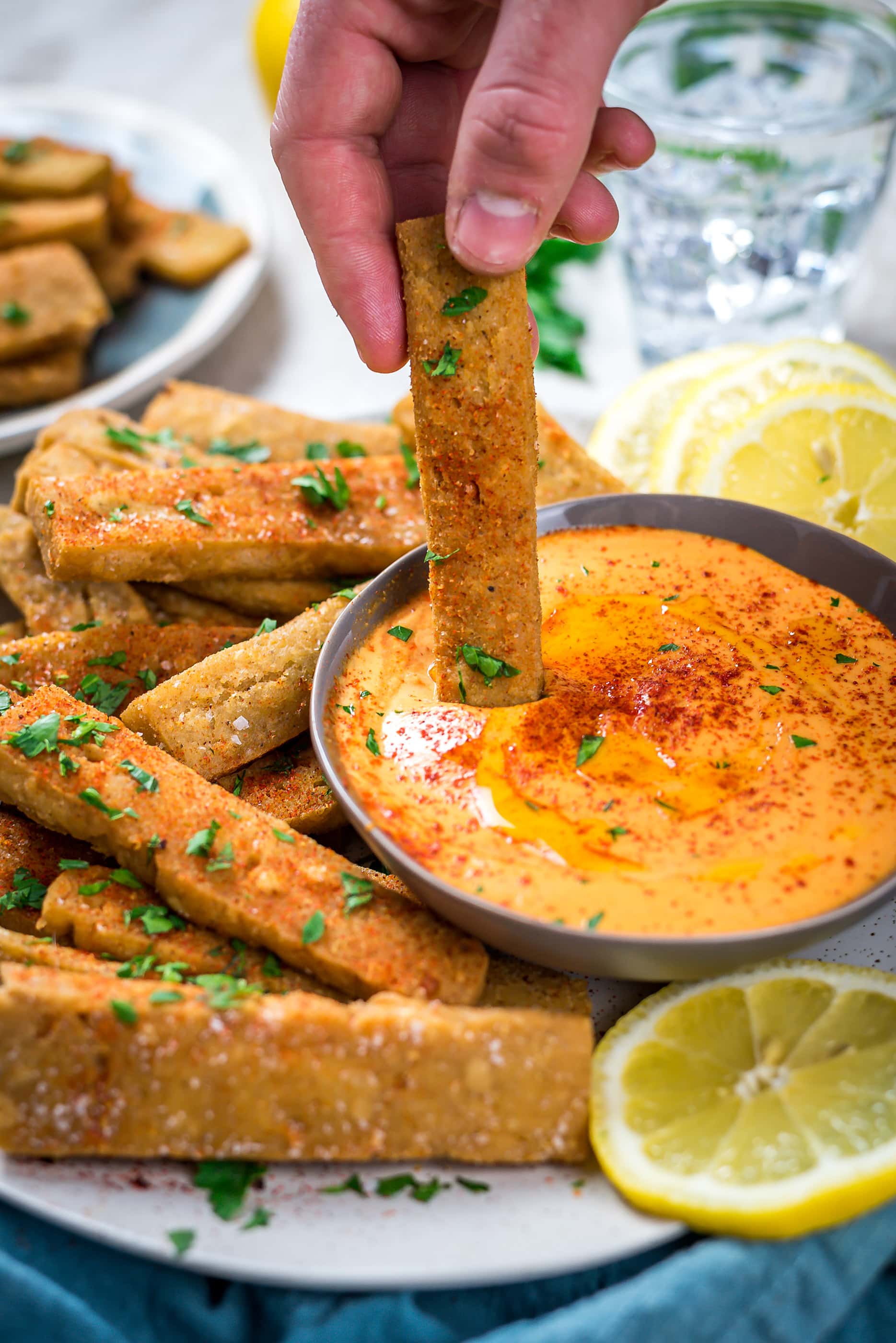