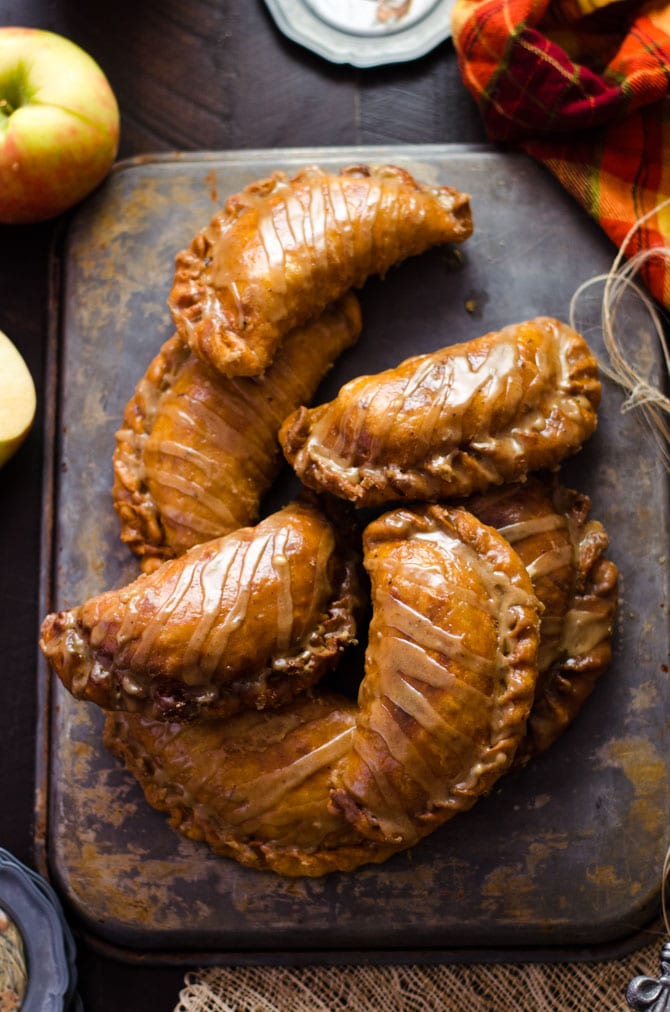 Sometimes, when I’m sitting at my desk, tucked inside of my warm house, with my fuzzy blanket draped over my lap and a hot coffee in hand, I almost forget how it felt to be 14 with frozen fingers.

Far before I ever had the luxury of working from home, or even in an office, or even in a building, I worked outdoors at the flea market. I peddled whatever products my Pop-pop decided was “the new thing” that he could get for a good price: knick-knacks, make-up, toys, what have you. And though my Pop-pop was entertaining, generous in paying me, and made it lucky gig for a young teenager, he did not have a good setup for bad weather.

Of all the things that I’ve ever dreaded in my life, cold, rainy days at the flea market are high up on the list. They resulted in painfully purple fingers, because gloves made handling money and plastic-wrapped products almost impossible to do quickly. I’d breathe a big sigh of relief when lunchtime rolled around and I could head to the main building to thaw out with a hot chocolate and warm snack.

My snack of choice? An apple fry pie from the Amish market. The buttery, flaky crust; gooey, caramelized apple interior; and warm spices made up a treat that I obsessed over. Even the smell of the cinnamon drifting out from the Dutch bakery was enchanting. Not to mention, they were perfectly hand-sized, which made them even more wonderful for eating on the go and, of course, defrosting my fingers. 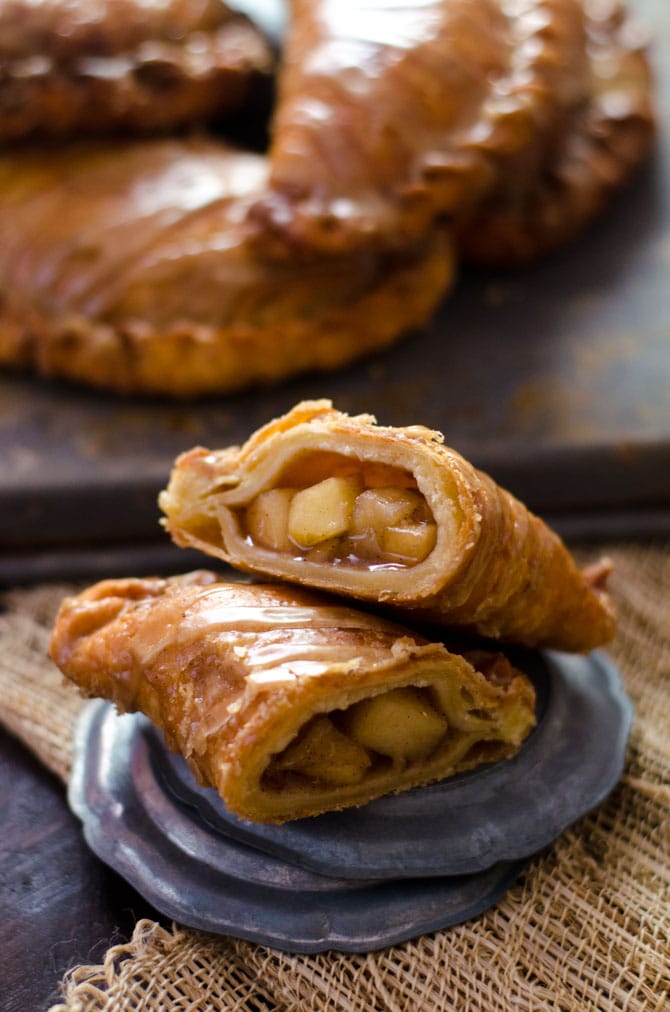 It’s been years since I got an apply fry pie from the Amish market, but they’ve been on my mind lately, and I’ve even contemplated a trip down to South Jersey just to get one. But then I remembered, duh, I make food for a living. I should just make my own– with my own twist, of course. Thus, Maple Brown Butter Glazed Amish Apple Fry Pies were born.

It’s a mouthful to say, sure, but I’m just going to say that it’s a clue to the many mouthfuls of these that you’re going to want to enjoy. 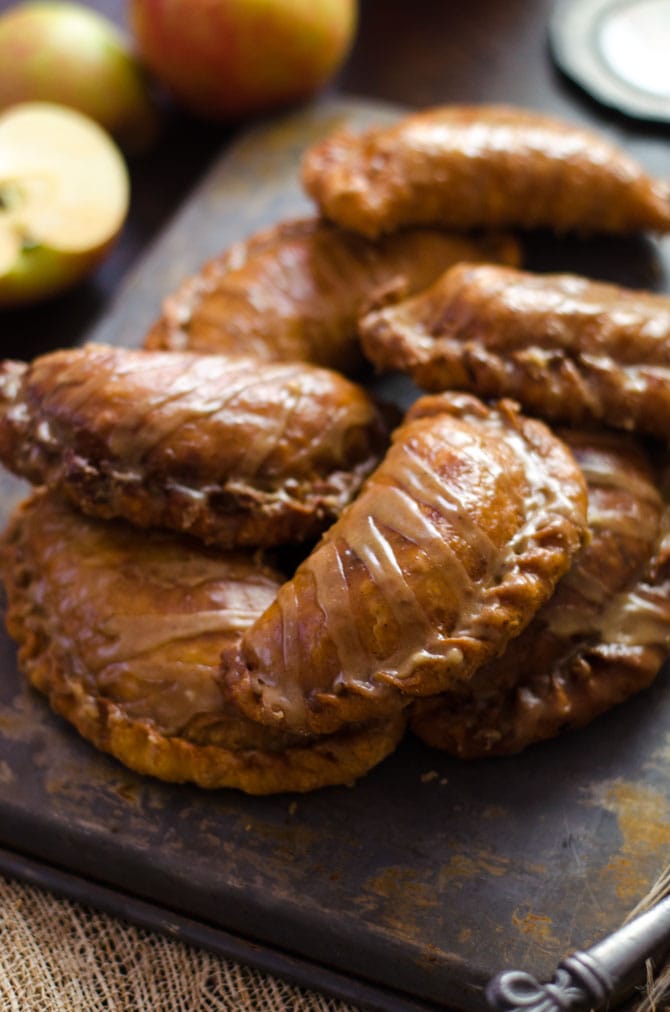 Like traditional Amish fry pies, the filling is made up of chopped apples, which are cooked down with a liberal blend of brown sugar and cinnamon, a kick of vanilla extract, and just a bit of lemon juice. It’s up to you how long you’d like to cook yours down; I like my apples to still have the slightest bit of crunch to them, but you can let them go until they’re completely soft if that’s more your style. Heck, you could even use store-bought apple pie filling if you prefer. You shouldn’t, because homemade is so much better and it’s pretty damn simple to do, but you could. It’s important to know your options, ya know?

As the apples are cooking, you can work on the dough, which is much easier than you might think. Cut very cold butter into small pieces, work the butter into the dough (the same way you would any other pie crust or pastry), and mix it egg yolks, salt, and hot milk. Stir it all up and then knead it until it’s smooth and voila, you dough is made.

From there, you can choose to either make big apple fry pies like I did, or slightly littler ones if you want to keep them on the small side for whatever reason. Why portion-control a hand pie? I’m not sure, but if that’s your thing then I’m not judging.

Ok, ok, seriously. If you want the big ones, you divide the dough into 8 equal-sized pieces. If you want smaller ones, go for 12. Form them into balls and then roll them out into disks. You can use an upside-down bowl to trim away excess dough if you have a hard time rolling them out evenly.

Then, place the filling in a line along the center of one dough round at a time, fold the dough over, and crimp it closed. 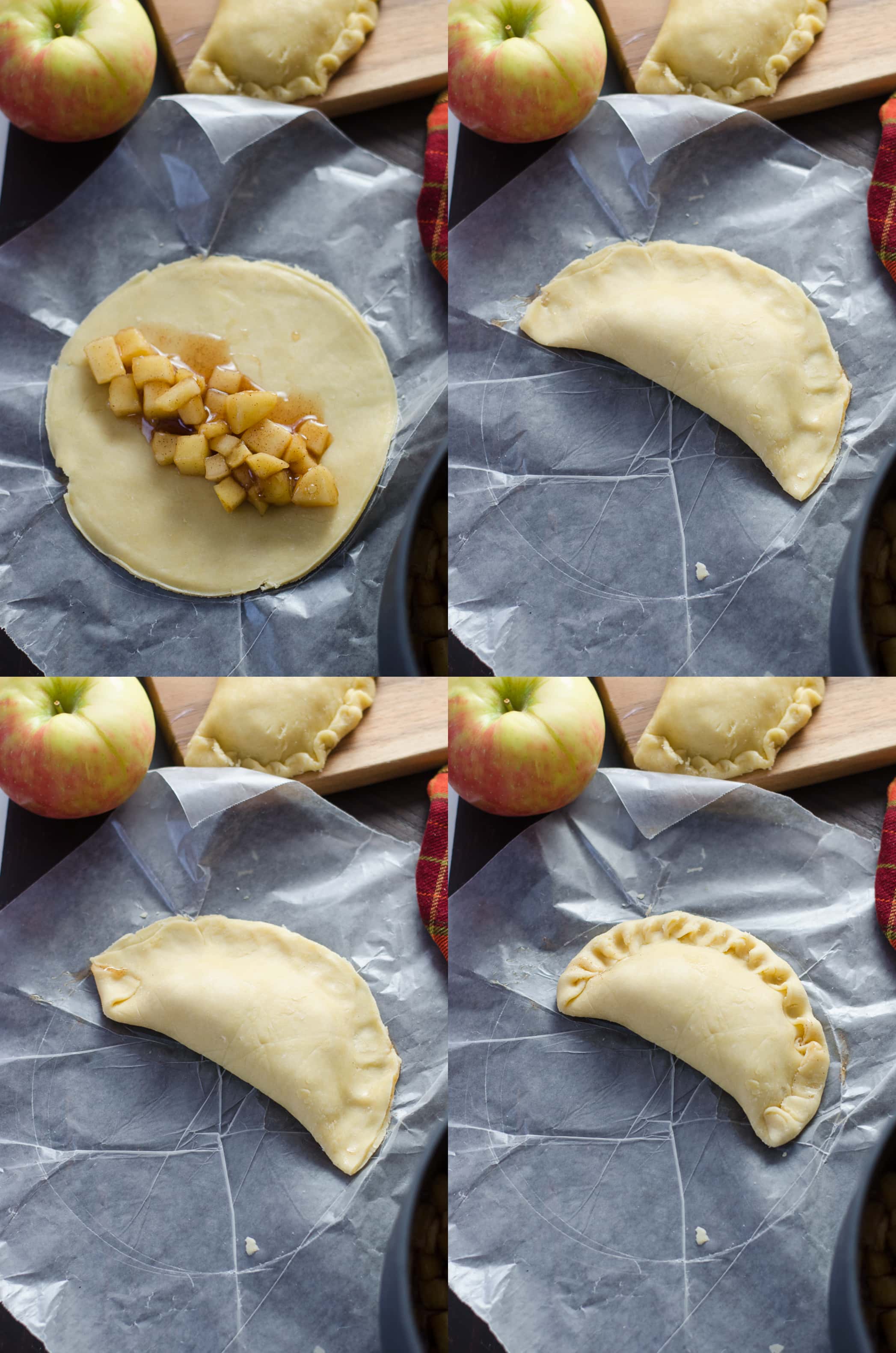 ^ Like that. Just fold the edge point by point by point and you’ll wind up with a nicely crimped edge. Then, off to hot oil they go until they’re gorgeously golden, just like at the Amish market.

You could eat ’em just like that, but resist the urge! Because we’ve still got that maple brown butter glaze to talk about, and I could talk about it ALLLL DAY. I’ll try to keep it brief though, so you can get to eatin’.

It may seem unnecessary to add more sweetness on top of mini apple pies, but the rich, nutty, maple-y glaze truly seals the deal here. Speaking of sealing, it also helps further seal the edges of the pies so that when you take a big ol’ bite, it’s not tempted to ooze out of the sides. Dual-purpose deliciousness.

Brown your butter in the microwave (so easy!) and then mix in brown sugar, maple syrup, and milk. Throw that back into the microwave and microwave until it’s all melted and smooth. Whisk in vanilla extract and powdered sugar to thicken it all up, and you’re ready to brush that glaze all over your warm apple fry pies. 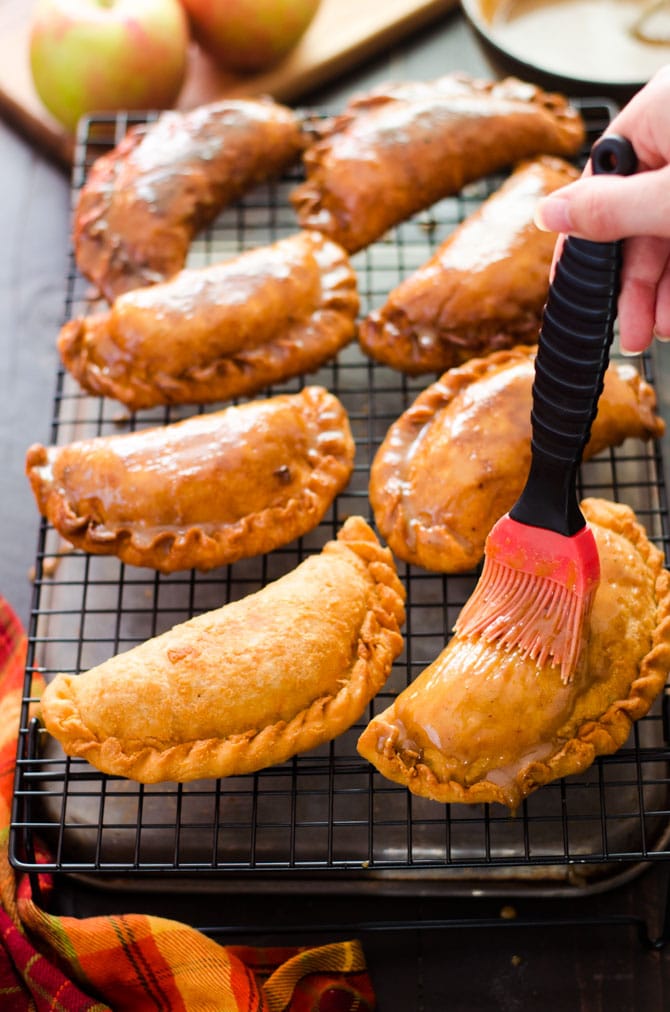 Really brush it on there. Don’t be shy. In fact, if you have extra, drizzle it over top. Maple Brown Butter Glazed Amish Apple Fry Pies require being glazed with reckless abandon. It’s what makes them so spectacular.

And believe-you-me, that’s exactly what these are. Spectacular. Warming. Sweet-Tooth Satisfying. Portable. Loveable. A bit of Fall in every bite. I could go on. 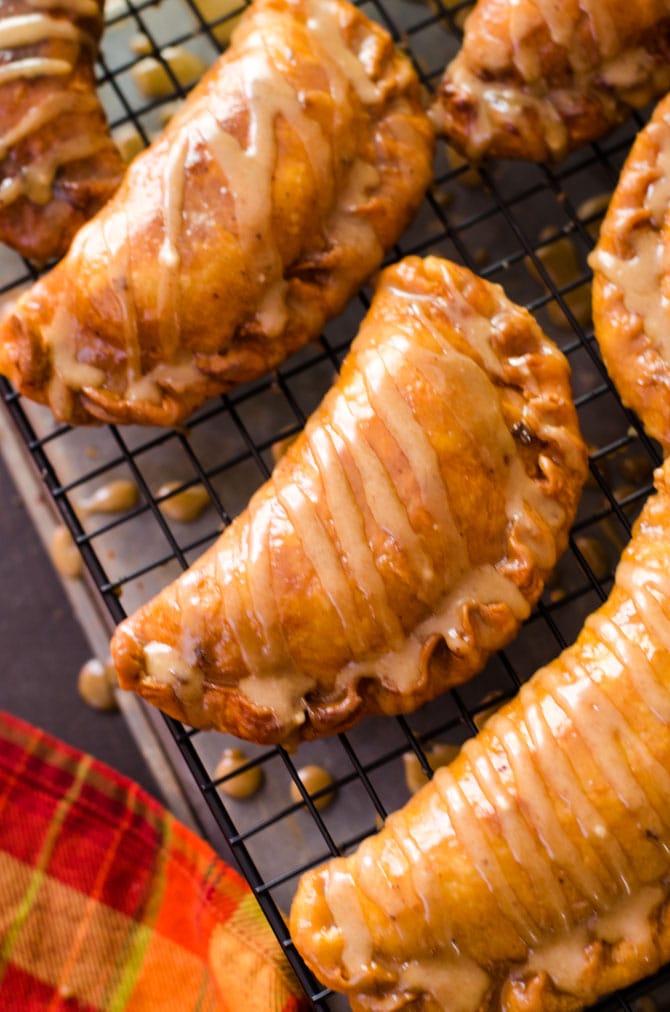 Bring these into work to share with your coworkers, serve them up at Thanksgiving, or just keep them around the house for a hot treat on a cold day. When you’ve got chilly hands that need some warming, you’ll be glad you did. Trust me.

Oh, and don’t forget to snap a photo of your Maple Brown Butter Glazed Amish Apple Fry Pies! If you tag them with #hostthetoast on Instagram, they’ll show up on the You Made It page, and you know I love to show off your pretty creations. 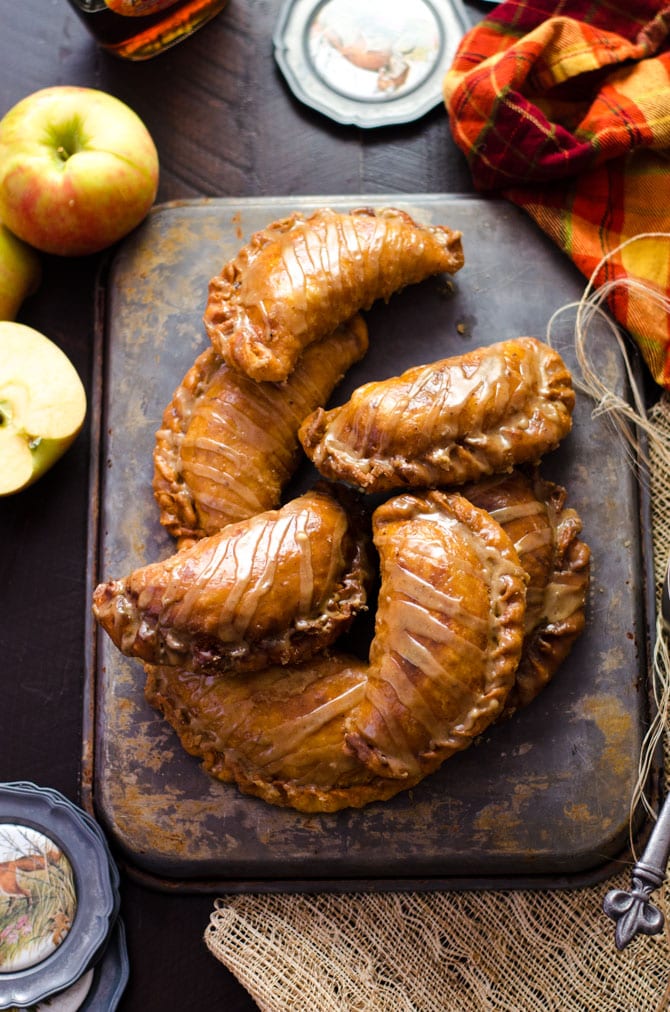 For the Apple Filling:

For the Maple Brown Butter Glaze: