French Onion Beef Stroganoff. This spin on French Onion Soup is hearty, comforting, and perfect for family dinners. It features tender beef steak, caramelized onions, mushrooms (if you like them!), egg noodles, rich beef gravy, and of course, plenty of delicious melted cheese. 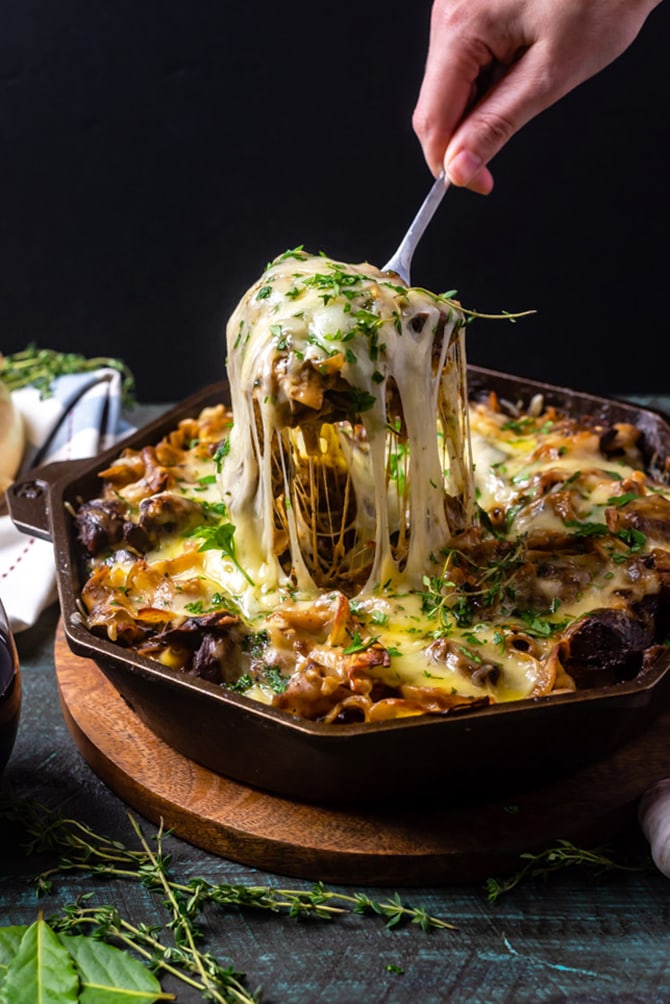 That’s definitely the best part of French Onion Soup in my opinion, although I’ll admit that the caramelized onions and beef stock certainly don’t hurt. Really I just have a sort of obsession with French Onion Soup, which you probably are already aware of if you’ve been hanging around here for a while. After all, I French Onion-ify everything I can. Case in point: marvel at these French Onion Beef Sliders, this French Onion Blooming Bread Bowl, and this Waffled French Onion Soup.

But this French Onion Beef Stroganoff isn’t a new French Onion recipe here on the blog– it’s actually the first dish that I ever decided to “onionify”, and my favorite of them all. After remaking it through the years, I figured it was time for some updated photos, some small tweaks to the recipe, and a how-to video. Everybody loves a how-to video, right? 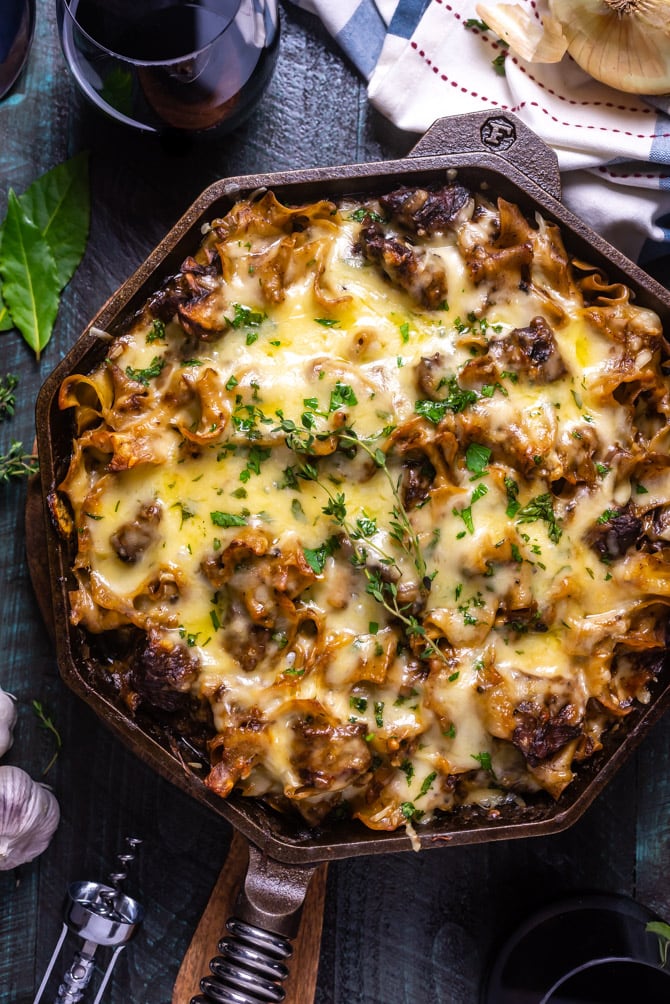 WHAT IS BEEF STROGANOFF?

I know I’ve been gushing a lot about the French Onion part of this recipe so far, but the real trick to nailing this dish is in the beef stroganoff. But what exactly is beef stroganoff?

Traditionally, beef stroganoff is a Russian recipe that consists of thinly sliced beef and sauteed onions and mushrooms. It’s finished in a dill-spiked sour cream sauce and served over a mountain of egg noodles. However, there are just as many variations as there are babushkas out there in the world. Every Russian family seems to have their own version that was passed down for generations, and after its heyday in America in the 1950s, grandmas from every background might be affectionately instructing you on the “right way” to make it.

The ’50s of course have come and gone, as has the popularity of beef stroganoff in the US. It has since maintained a reputation for being a “retro” food, though its roots go back much further than that.

Beef stroganoff was actually created for a 17th century Russian elite named Count Pavel Aleksandrovich Stroganoff. Born in France, the diplomat developed a taste for both Russian and French cuisine, so chefs served him a hybrid recipe of French mustard beef and a dollop of Russian sour cream. The dish lived on long beyond Stroganoff himself, and slowly shifted into the recipe we know today. And despite all of the history behind it, this comforting, hearty dish is still definitely deserving of a spot on your (modern) dinner table. 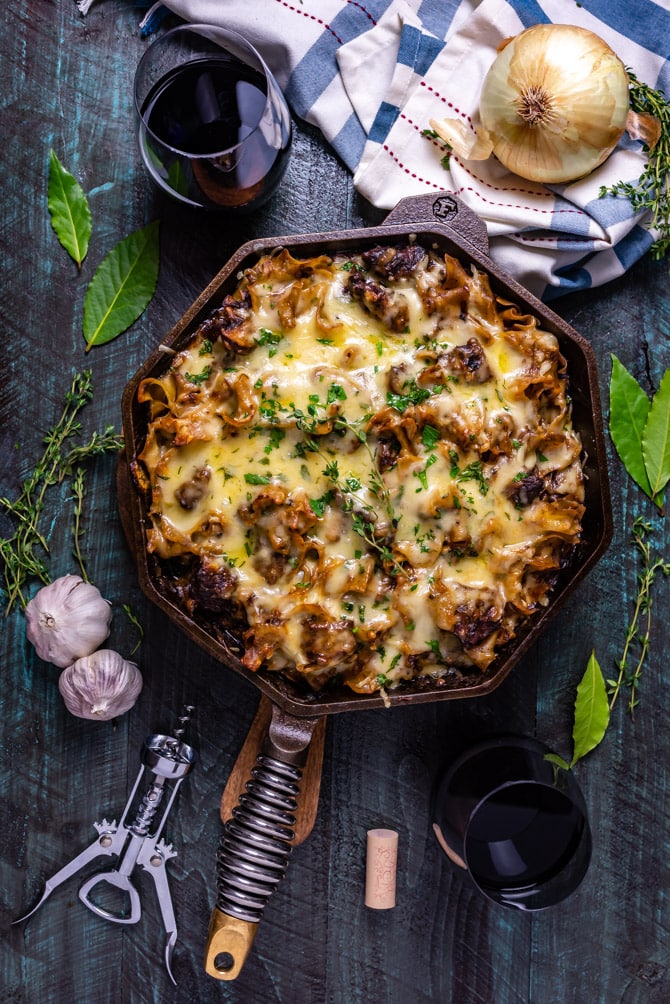 Given the French influence on beef stroganoff itself, it’s no wonder adding a French Onion twist works so well. I decided to take some tips from both French Onion soup and French beef stew in order to make this recipe as delicious as possible, and trust me, it hits all of the marks.

First, I focus on the beef. As I mentioned, Russian beef stroganoff usually uses thin strips of beef, but I prefer cubed beef, which doesn’t get lost among the many onions and noodles in this recipe. By first tossing the beef in flour, then browning and reserving for later, I’m able to get a slight crust on the edges which always makes a meat-based recipe all the more enjoyable.

It’s important to remove the beef before moving on to cook the onions, as leaving the beef in would result in overcooked, chewy chunks. However, leave all of those crispy browned bits on the bottom– those will help to flavor the sour cream sauce that brings it all together. 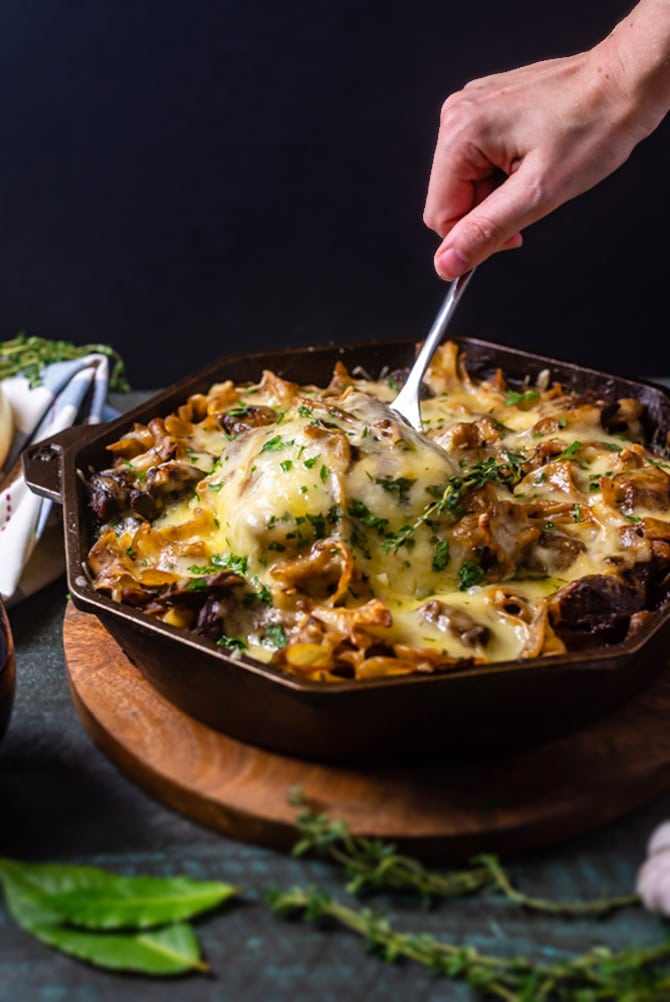 Once the beef is finished browning and removed from the pan, I add in my onions, as well as some thyme and bay leaf for authentic French Onion flavor. I cook the onions until they’re just lightly caramelized, then I add in the mushrooms and saute them until everything’s beautifully brown. At this point, I remove the thyme and bay leaf and focus on the sauce.
(PS. If you don’t like mushrooms, don’t worry. You can definitely leave them out!)

To make the sauce, I deglaze the pan with red wine. This will bring up all of the browned bits I mentioned earlier so that they can incorporate the beef’s flavor into the sauce.

Then, I add just a little more flour and stir everything together before adding in the broth. This step is key in ensuring that the sauce will thicken up enough to coat the meat and noodles in a rich, beefy gravy. I also add worcestershire sauce to the mix to give the dish more depth. At that point, I add the beef back in and simmer until the sauce is thick, and then I mix in the sour cream and cooked egg noodles.

Now for everyone’s favorite part: the cheese! Grated Gruyere is my favorite (and it is the classic cheese used in French Onion Soup), but you can also use swiss or provolone if you prefer. All that’s left to do is pop it in the oven until the cheese is melted and beginning to brown, then sprinkle over some chopped parsley and savor all of those beautiful French Onion Beef Stroganoff cheese pulls. 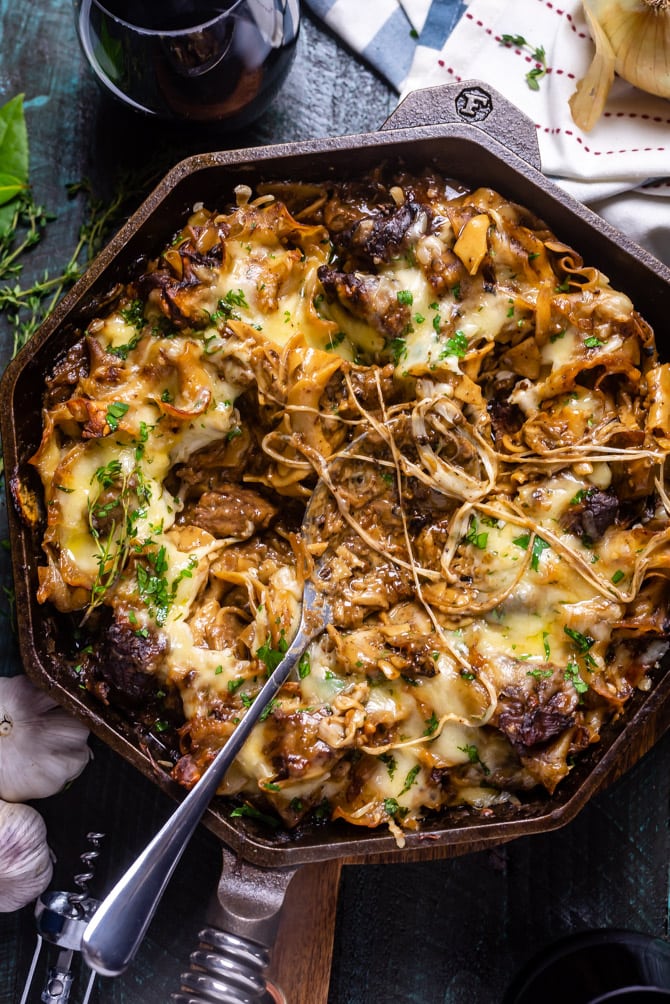