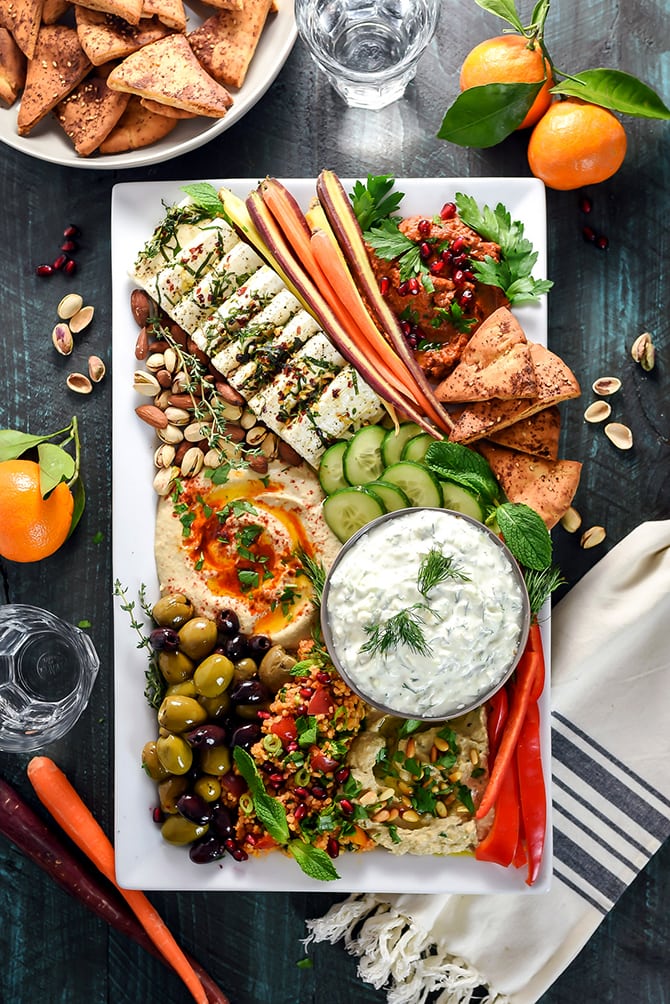 I almost flipped the whole damn table over on Friday night.

James suggested that we do a date-night dinner this past weekend at our favorite little Turkish hole-in-the-wall and I was all about it. Partially because I am absolutely obsessed with the food there– the creamy hummus, the crispy falafel, the warm pita bread, the butter-soft grilled meats, the syrupy baklava… 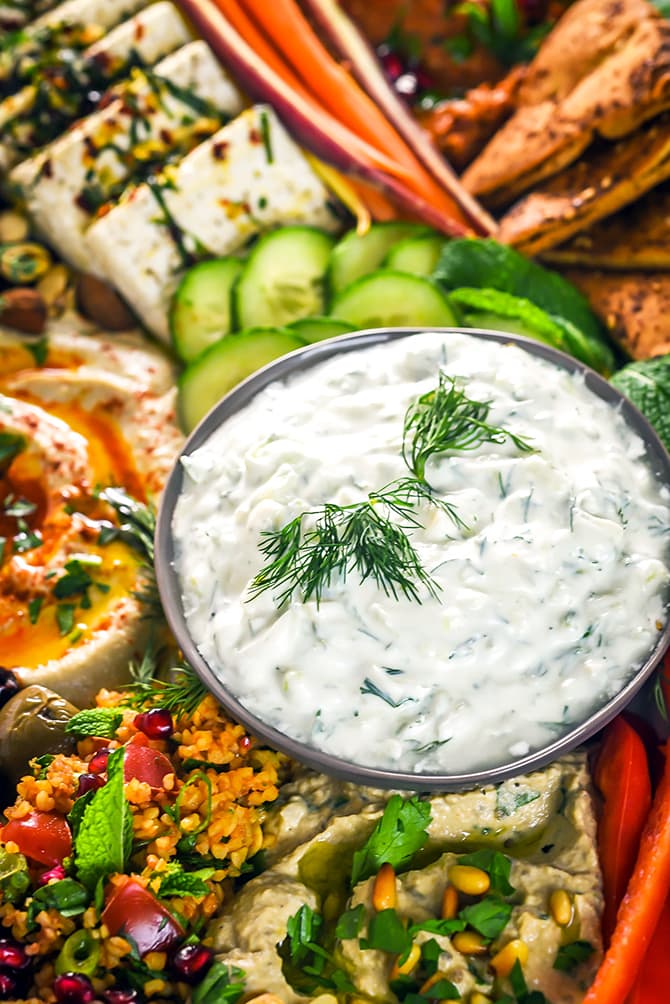 And partially because James voluntarily peeled his eyes away from Fortnite and remembered that I exist over here. You gotta take whatever attention you can get when the new video game obsession hits, you know?

(I’m totally kidding, you guys. But man, every guy I know is in LOVE with that game.)

Anyway. So we’re at the the Turkish place and we’re trying, with every ounce of self-control that we can muster, to pace ourselves with the pita as we wait for the cold appetizer platter to come out with all of the spreads and salads. And we’re talking about how we are so excited for the baba ghanoush (his favorite) and the hummus (my favorite), and we wish they served muhammara, because we haven’t had it since I made it that one time… 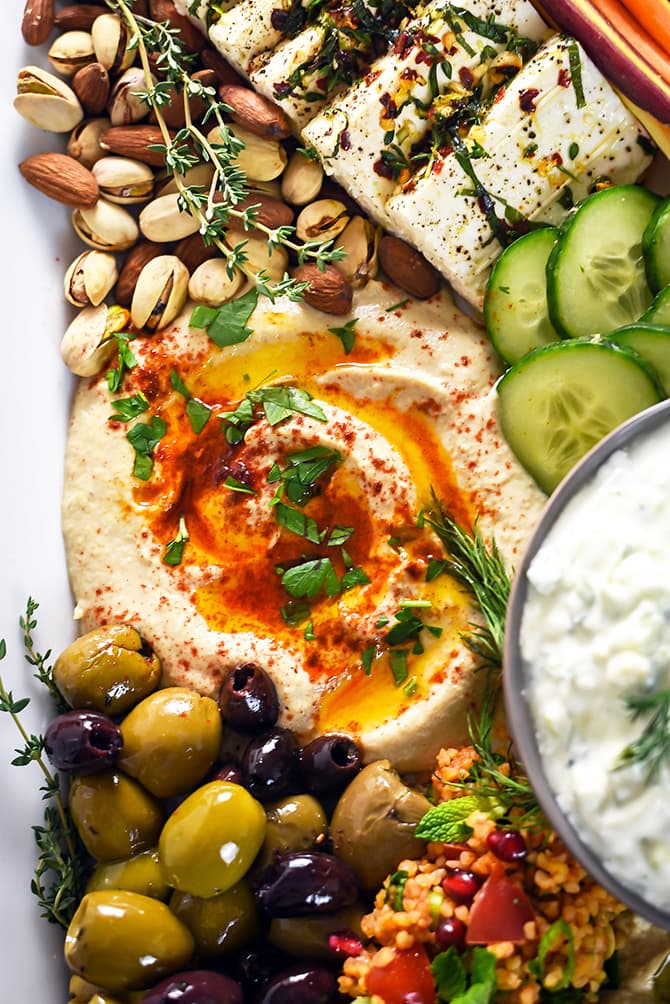 … when I suddenly throw my hands up in the air, almost toppling the table in the process, and shout, “I don’t think I ever posted that Mezze Platter!” And I kid you not, every single person in that little restaurant stops eating and talking and looks at me as James is trying his best to steady the table and hold the water pitcher that was just wobbling back and forth.

So that was just a little embarrassing.

And what is almost just as embarrassing is the fact that I made this Mezze Party Platter in November, when my mom and brother requested something “Mediterranean or Middle Eastern” for our annual family Not-Thanksgiving Dinner (because I do Thanksgiving with James’ family these days). You might remember that the tradition started a year before, when I made a bunch of tropical island-inspired dishes like Jamaican Jerk Chicken Chili and Rum-Caramelized Banana Nut Crumble. 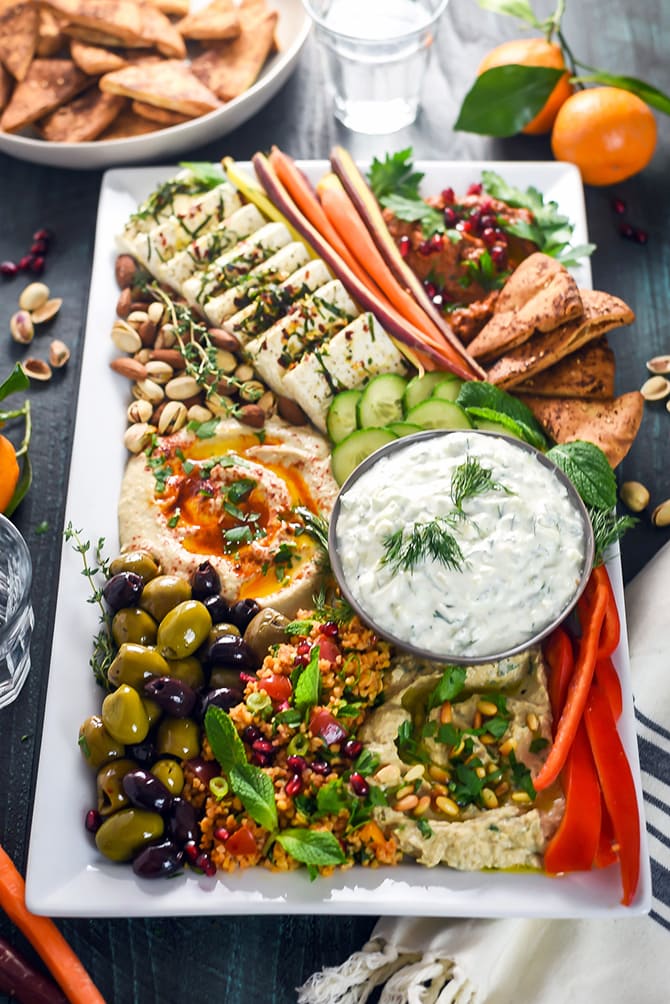 Yep, I made this Mezze Party Platter waaay back in November and I was so proud of it, but I was in a time crunch with some Christmas recipes so I kept pushing it back until I completely forgot. Well, until Friday, obviously.

The platter is meant to have a little something for everyone (and a lot of everything for me), so it includes marinated feta cheese, rainbow carrots, muhammara, za’atar sprinkled pita chips, sliced cucumbers, tzatziki, red pepper strips, baba ghanoush, Turkish tabbouleh, olives, hummus, and some nuts. It was hard to choose what to include because so many countries have hundreds of awesome appetizers recipes that would have worked beautifully in the platter, but I think I found the perfect balance of ingredients– spicy, sweet, salty, savory, nutty, and more, all on one tray.

My favorite thing about the platter is obviously that every single part of it tastes amazing. But my second favorite part is that it doesn’t require that you serve anything warm– you can easily make everything 2 days in advance and just assemble the day of. You can also easily scale it up or down for different sized parties. Personally, I always make sure there will be plenty for leftovers because all of the components make for great meal prep lunches as well. Two birds with one stone, as they say. 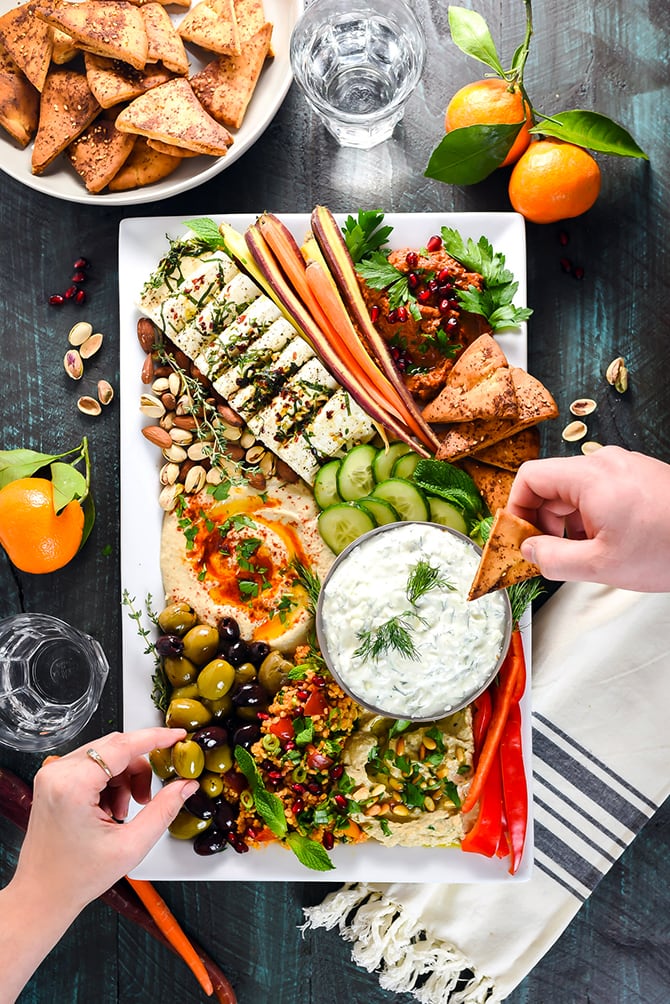 Here’s a photo of James and I grabbing what we can from the platter before I wrapped the whole thing up to bring to my mom’s, where it was promptly devoured by everyone– even my slightly picky uncles. If I had to sum it up, I’d say it was a feast worth flipping tables for.

For the marinated feta:

For the Turkish tabbouleh:

For the za’atar pita chips:

To start, prepare the feta. Lay the feta on a large plate with each slice slightly overlapping the last. Sprinkle the leaves from the thyme, the sliced basil, the minced garlic, the red pepper flakes, and the lemon zest all over the feta. Drizzle with the lemon juice and olive oil and then sprinkle with salt and pepper, to taste. Cover with plastic wrap and refrigerate until ready to serve.

Meanwhile, make the muhammara. In the bowl of a food processor, combine the roasted red peppers, toasted walnuts, garlic, lemon juice, pomegranate molasses, cumin, and half of the olive oil. Process until smooth. Add in the breadcrumbs and pulse until you reach the desired consistency. Season with red pepper flakes and Kosher salt, to taste, and pulse just until evenly distributed. Cover and refrigerate until ready to serve.

Next, make the Turkish tabbouleh. In a large, heat-proof bowl, combine the dried bulgur, olive oil, tomato paste, harissa, salt, and 1 cup of boiling water. Mix well. Let the bulgur sit until it has absorbed all of the liquid, about 30 minutes. Mix in the tomatoes, green onion, parsley, and mint. Cover and refrigerate until ready to serve.

Shortly before serving, make the za’atar pita chips. Preheat the oven to 350°F. Use kitchen scissors to cut the pita bread into small triangles by continuously cutting the pita in half until you reach  your desired chip size. Place the pita triangles in a large bowl and toss with the olive oil, za’atar, and salt. Spread the pita chips on two large baking sheets and bake until crisp and golden, about 10 minutes, turning halfway through. Allow to cool slightly and transfer to a bowl to serve (or transfer to an air tight container for up to 2 days before serving).

Assemble the party platter with all of the completed ingredients, as well as carrots, bell pepper, cucumber, olives, nuts, and plenty of herbs and pomegranate seeds to garnish. Serve at room temperature.

All of the components of the mezze platter can be made up to 2 days in advance. Simply assemble everything the day-of for a low-stress but really stunning platter.