“Let’s make Wurstsalat,” my Omi (German for Grandma) said through her thick accent over the phone, as we tried to decide what we would cook together when she visited.

“Okay, what’s in that?” I asked her.  Wurst is German for sausage, and salat, obviously, for salad.  I was expecting a big bowl of bratwurst with some kind of German dressing.  Yes please.

I cut her off before she could finish telling me the ingredients.  First of all, of all the German wursts, you want to use bologna?  BOLOGNA? No way.  That stuff is gross.  Also, big pieces of tomatoes aren’t my thing.  Sorry, Omi.

That’s what I explained to her, but, as shouldn’t be surprising to anyone who has ever met my Omi, we wound up making Wurstsalat anyway.  The woman doesn’t budge, I tell you. 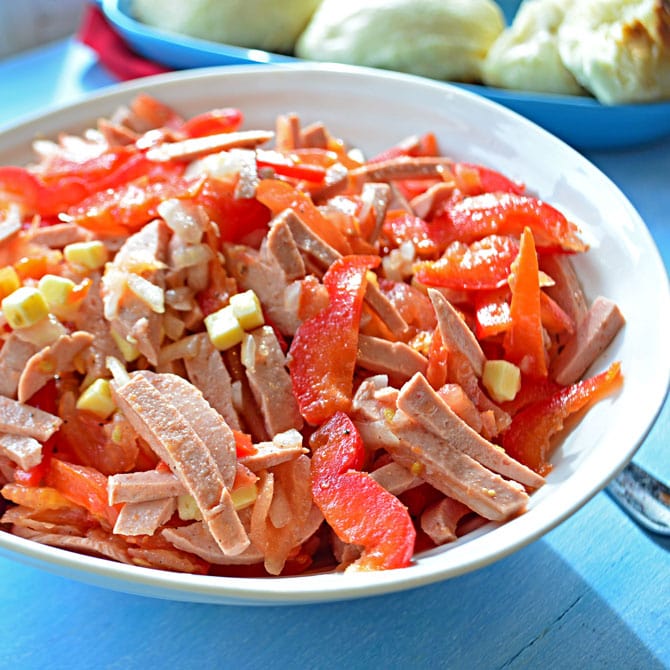 It’s a good thing, though, because I actually liked this.  Maybe even loved it.  It’s a seriously easy dish to throw together, requires no cooking, and it’s big on flavor.  Ring bologna is surprisingly good, and although it has a similar flavor and texture as American bologna, it is significantly tastier and a bit more like sausage than its counterpart.

This German Bologna Salad would be great at barbecues, picnics, or get-togethers during warm weather days.  It also makes a fantastic anytime meal, snack, or side dish with no fuss!  Enjoy!

Germans love their wurst, so naturally, there are many variations of Wurstsalat. This version combines ring bologna, red pepper, onion, tomato, and cheese in an oil and vinegar dressing for a delicious salad that is much lighter than its mayonnaise-dressed alternatives.