One Pot Cajun Chicken and Rice. This delicious one pot dinner features tender seasoned Cajun chicken, andouille sausage, and flavorful rice, and it takes less than an hour to make from start to finish. 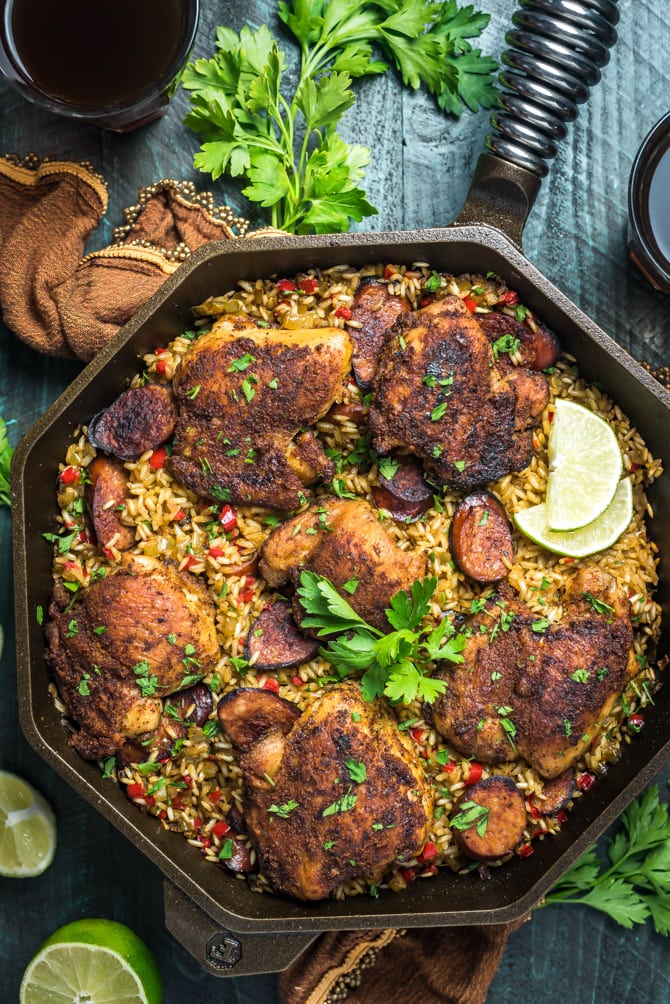 Given the fact that I’m Ms. Rarely Repeat A Recipe (once it has already been tested, perfected, photographed, and video’d successfully, of course), you might think that I come from a family of similarly adventurous eaters. But you’d be wrong. My family– specifically my mom and my brother, really– eats the same few things nearly every single day.

I’m pretty sure that I’ve mentioned to you guys several times before, but my brother Mark has a disability called Duchenne Muscular Dystrophy. So when my mom has stuff to do, I drive down to my hometown to keep him company and make sure he’s taken care of. And even though I’m technically there to feed him, get him to bed, and all of those sorts of things, I also get a lot out of it. Mark’s forever telling jokes, teaching me little astrophysics facts, striking up philosophical conversations, playing me songs that he taught himself on the clarinet (which, by the way, is pretty hard to play when you’ve got Duchenne), and reading me his latest poems. He’s clearly the more interesting sibling. A jack of all trades. An eclectic dude. Except for, of course, when it comes to his food. 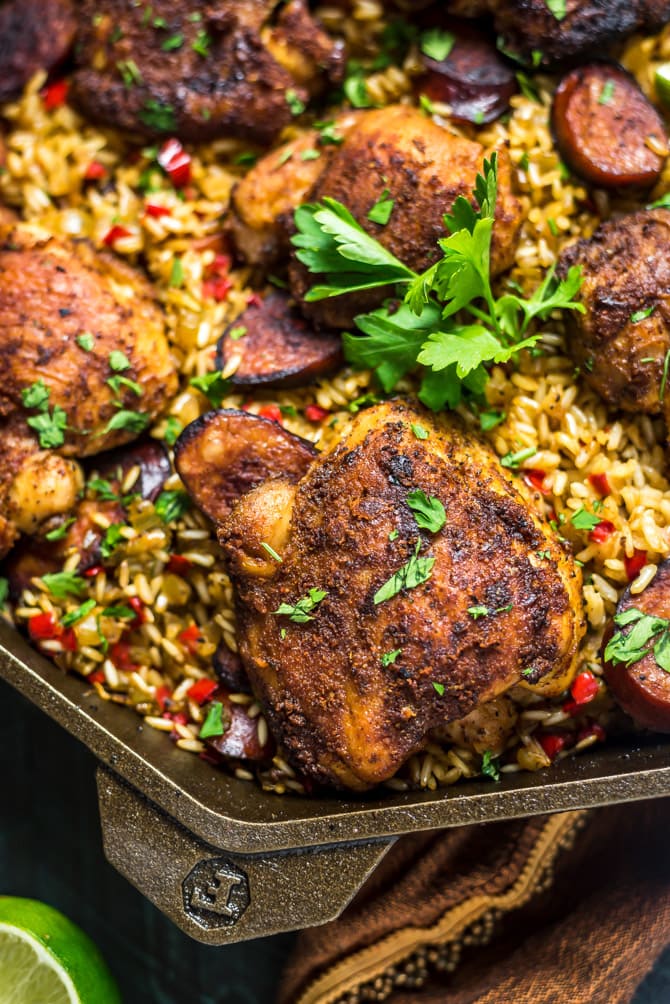 When I’m visiting, I always offer to make Mark whatever he wants for dinner. Anything his heart desires. And you know what he says ten times out of ten? Rice. Seriously, rice.

His go-to is rice with beans and tomatoes, but during my most recent visit, I decided to make a huge pot of rice with a little bit of a special spin. A Cajun-style spin. I used a generous amount of Cajun seasonings, onions, peppers, and celery to amp the rice up a bit. Mark devoured it. I devoured it. We ate it for lunch the next day. And dinner. And lunch the next. And then dinner again. Like I said, it was a huge pot of rice, but we couldn’t get sick of it, and it was so simple.

Apparently, he’s asked my mom to make it about a dozen times since. I wasn’t kidding when I said that he likes to eat the same thing every day. 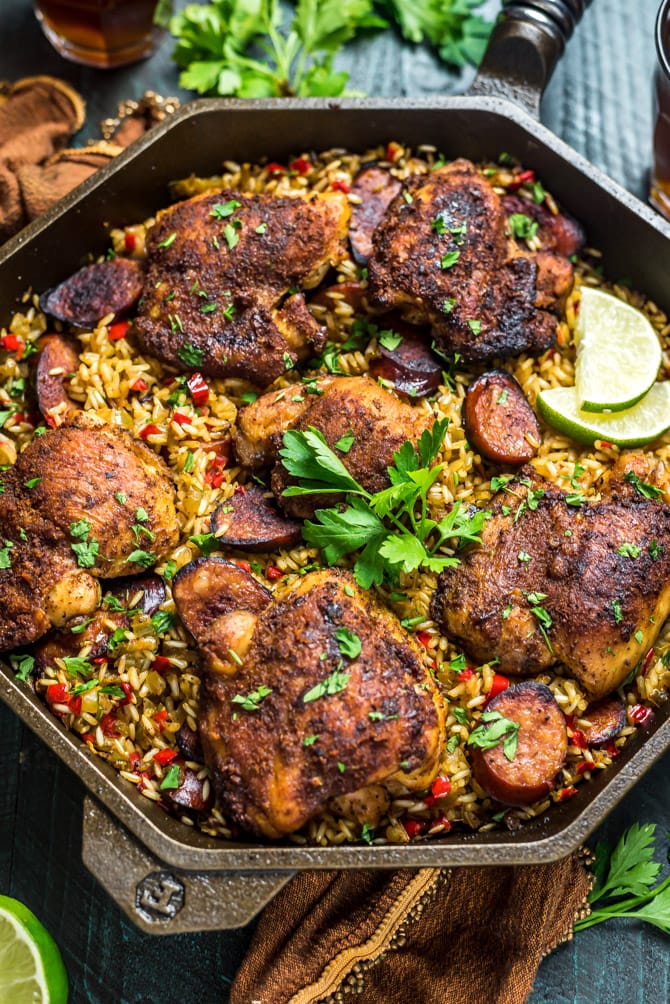 When I went back home, I decided I wanted to tweak the recipe to make something for the blog– this time, adding in chicken thighs and andouille sausage for some protein (and to make sure the guys would eat it.) And that’s how this One Pot Cajun Chicken and Rice was born.

I thought that I couldn’t get enough of the rice on its own when I made it for my brother, but man. As the andouille sausage cooks, it flavors the rice with its smokiness and spiciness, and the juices from the chicken thighs are absorbed by the rice, too. And that says nothing of the chicken thighs themselves, which are as flavorful with their blackened spice-rubbed exterior as they are tender and delicious on the inside.

I know, by the way, that some people aren’t a huge fan of chicken thighs, preferring the light meat of chicken breasts instead, but I’m urging you to try thighs in this recipe. They’re difficult to overcook, they lend a TON of flavor to the rice, and they’re much jucier than chicken breasts. Not to mention, they’re usually less expensive!

However, if you really are the breast-or-bust type, swap in chicken breasts for this One Pot Cajun Chicken and Rice, and just be very careful not to overcook them. A thermometer is your best friend when cooking chicken. 165°F exactly and you’ll be set! 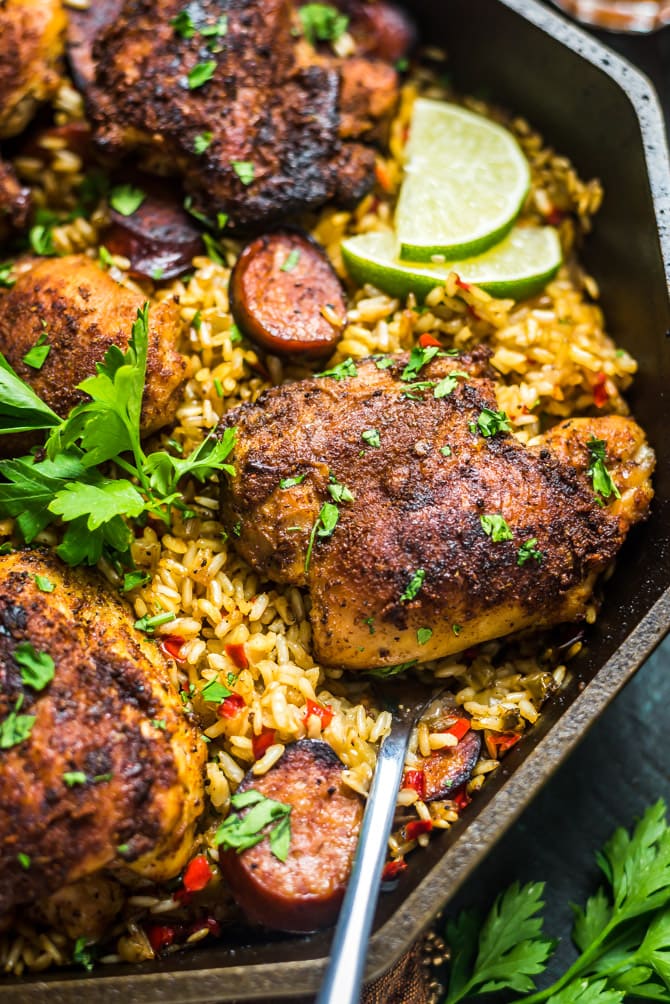 Since we’re on the subject of swapping and adjusting, feel free to also add in kidney beans (or really any beans) if you’d like. I left them out of this recipe to keep the ingredients list as low as I can, and because housemate Mike refuses to touch any recipe with beans in it. “Beans are nothing but soggy nuts,” he’ll quote from The New Girl every time he’s offered. But as always, you know I like to encourage you guys to switch things up to suit your family.

And speaking of your family, this is a recipe that you can add to the weekly rotation for them! One Pot Cajun Chicken and Rice is super easy to make on a weeknight, doesn’t require a ton of clean-up, and is loved by picky and adventurous eaters alike. (Just watch the spice level of your cajun seasonings if you’re feeding kids.) It’s one of those recipe that might make you guys turn out like my family– requesting the same meal almost every night! 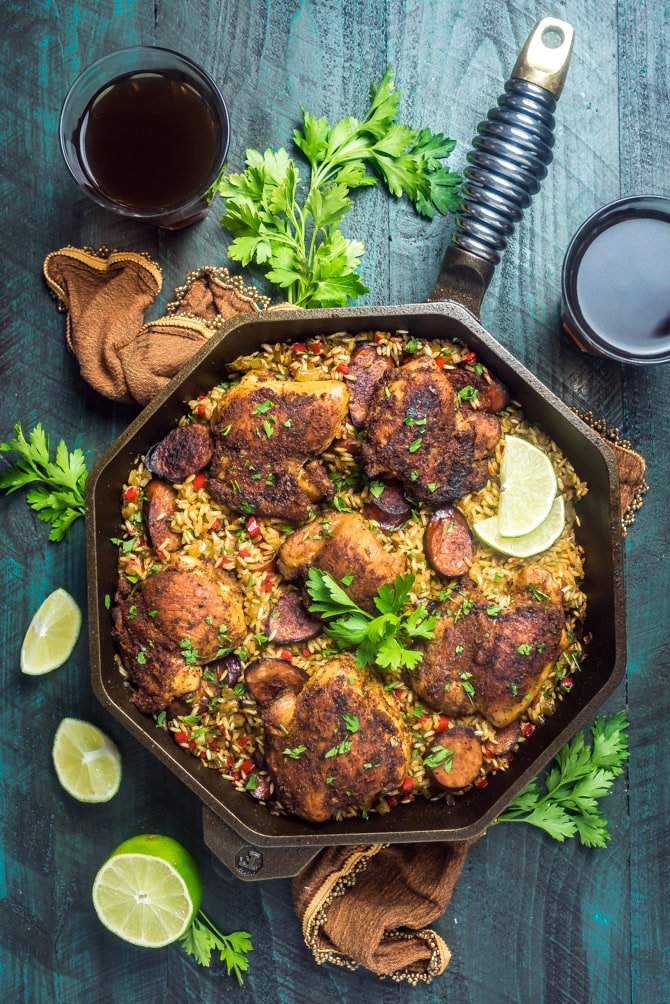 CHECK OUT THE VIDEO: