It was almost exactly three years ago that I was spending my Winter Break at Rutgers, hanging out with whichever of my sorority sisters were still around, wasting countless hours at James’ fraternity house, and singing and dancing to Christmas songs with all of our friends who decided to stay in New Brunswick. 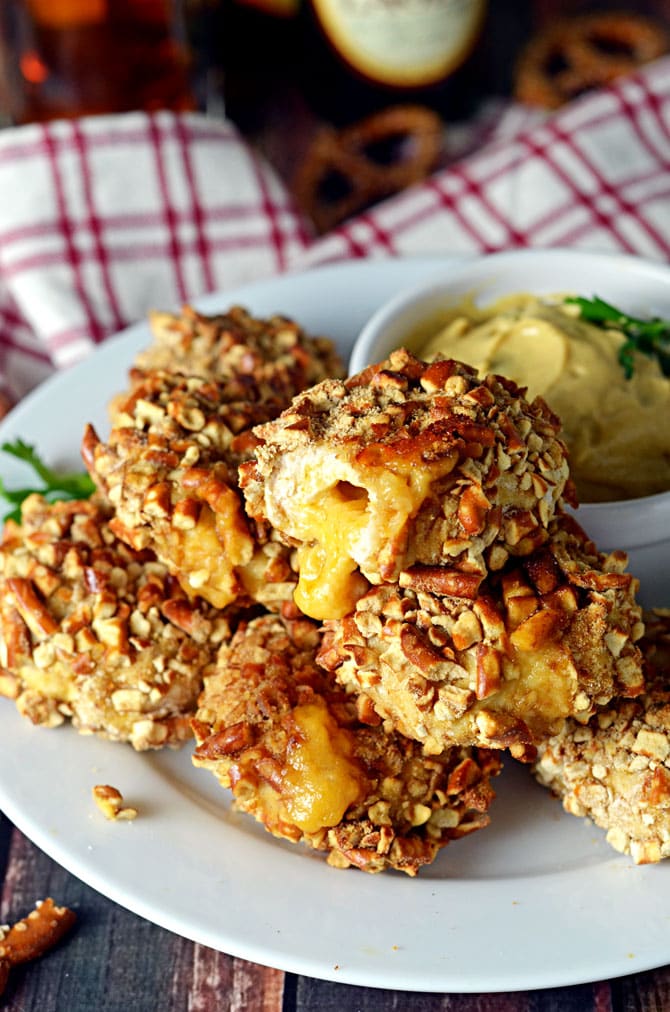 James and I weren’t dating yet.  In fact, I don’t think I even really realized that I had an actual crush on him at this point.  That, or I was avoiding admitting it because I had gotten out of a rocky relationship a couple of months prior and was still very, very firmly in the “I just want to be single and not deal with anyone’s crap” stage.

Regardless, I subconsciously started coming up with friendly excuses to hang out with James more, like making dinner for him and his fraternity brothers who I was good friends with as well.  After all, what college student would turn down a free meal?  I had mastered the art of boiling water and could make some passable pasta dishes, but after a few days of spaghetti I decided I should probably learn some more recipes if I was going to pretend to know how to cook.

Despite serious Google research into any meal I attempted to make, most of the time it didn’t work out well.  But sometimes– sometimes– I wound up surprising myself and nailing the recipe, like when James suggested I make Pretzel-Crusted Chicken. 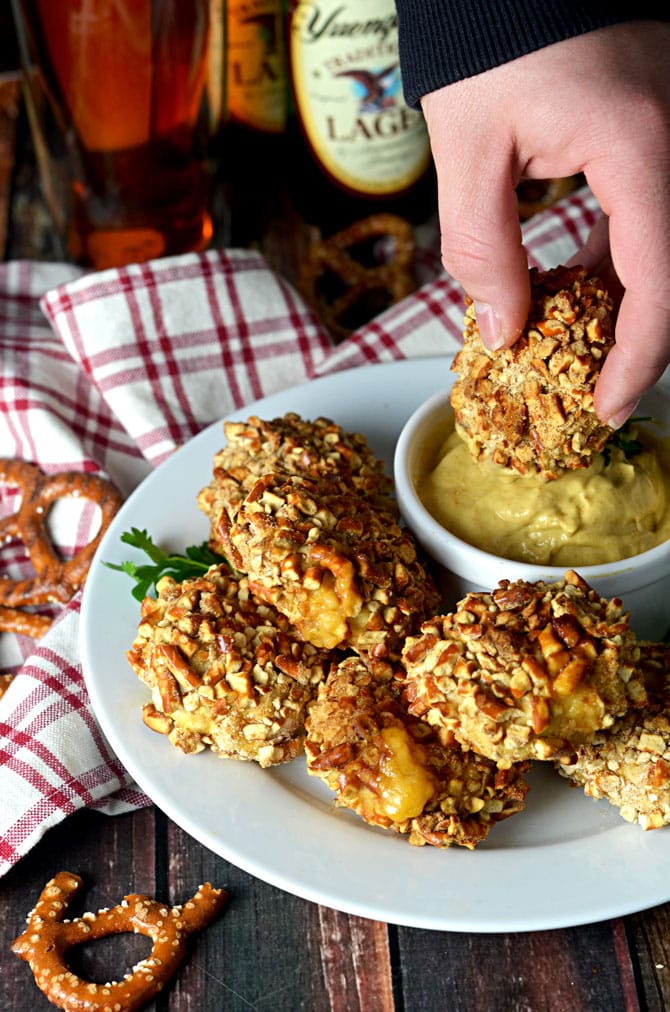 By the way, at this moment I definitely knew I had a crush on him because I was a pretzel fanatic and coating chicken in the stuff sounded like easy-meal nirvana.  He was obviously my soul mate, because in my mind the way to find “the one” is to see who gives you good recipe suggestions and then keep them around for as long as possible.  This is why you should never ask me for dating advice.

Or maybe I’m on to something, because it’s worked out pretty well for me so far.  Who knows?

Pretzel-Crusted Chicken quickly was added to my regular meal rotation, and stayed there until I started food blogging a year later and pretty much abandoned all semblance of a regular meal rotation. (Gotta keep coming up with new stuff, keep it fresh and interesting, you know?)  Somewhere around this time I also finally got out of the “SINGLE FOREVER / WORK ON MYSELF / I’M A STRONG INDEPENDENT WOMAN WHO DON’T NEED NO MAN” stage and allowed myself to start actually calling James my boyfriend.  It was a time of change. 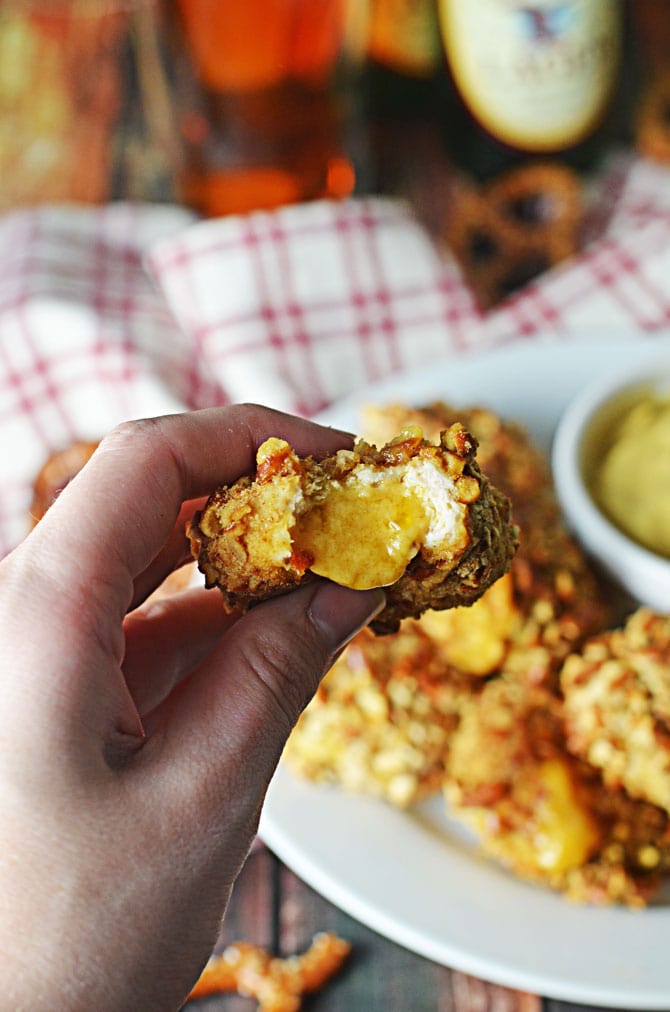 And somehow, in all of that change, I forgot about the Pretzel-Crusted Chicken.  That is, until a few weeks ago, when James brought it up again and asked me to make it for the blog (read: for him).  “I’d love to, but it’s been done before,” I said.

“Then make it with beer cheese.  And in nugget form.  The people love chicken nuggets, Morgan,” he replied.

He had me at “beer cheese”.  It was like the scene from Jerry Maguire, but tastier.

So of course I made them, and oh my goodness words cannot express the pure, unadulterated joy that comes from biting into one of these on Football Sunday.  Pretzel-Crusted Chicken Nuggets Stuffed with Beer Cheese are like a Super Bowl in your mouth.  They are like everything you’ve ever dreamed of, wrapped up in everything you never knew you were missing in an appetizer.

Maybe I’m exaggerating, but they are just really good and you and everyone who tries them are going to love them. 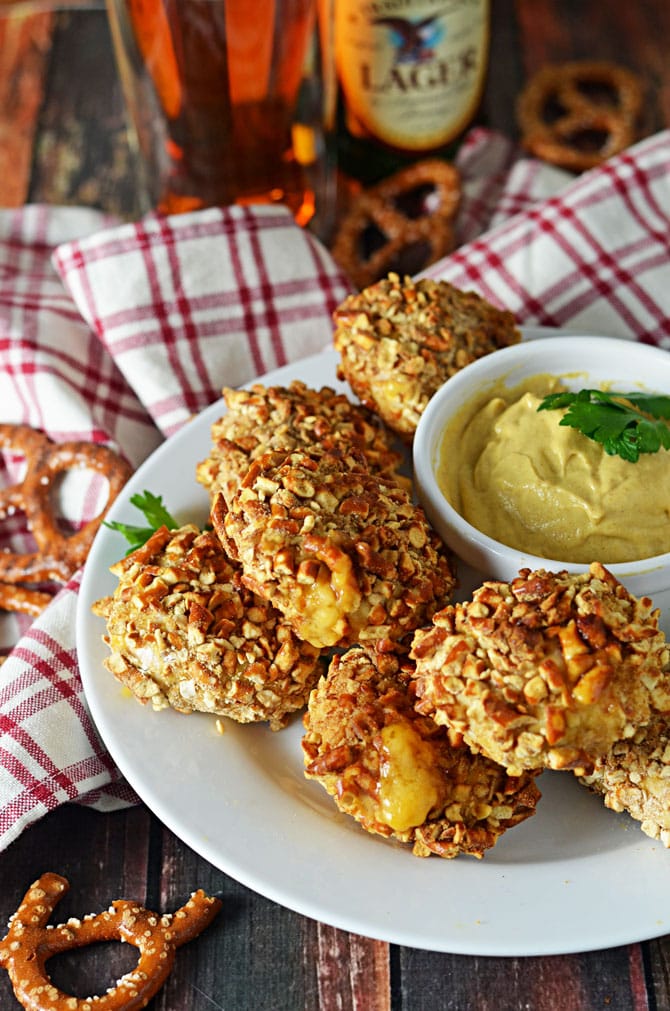 For the Beer Cheese: