This shop has been compensated by Collective Bias, Inc. and its advertiser. All opinions are mine alone. #SavorPumpkinSeason #CollectiveBias 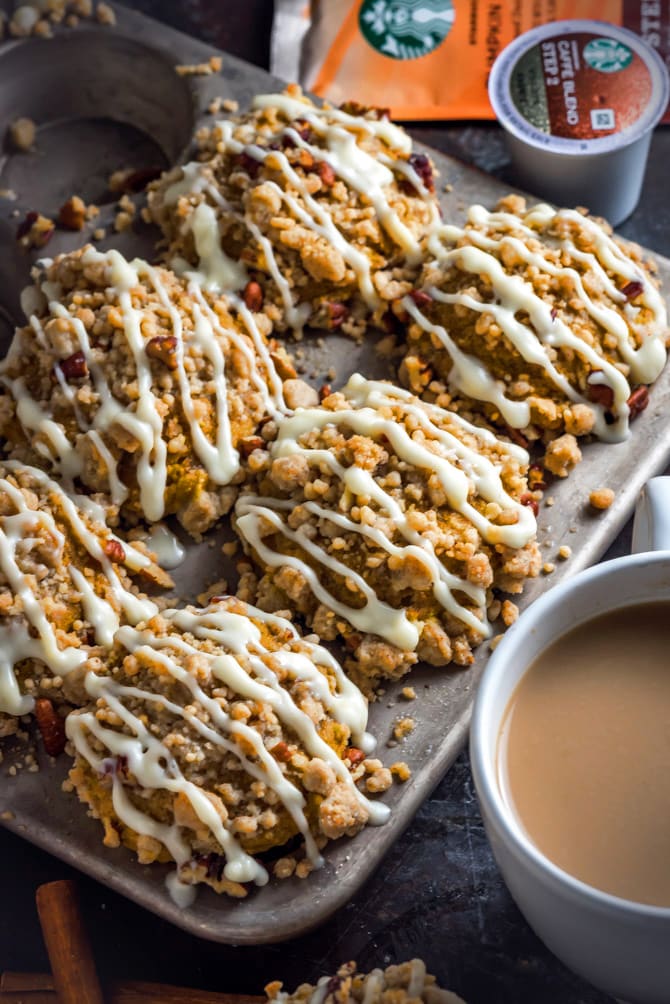 I’m entirely aware that it’s usually not a good thing to say that your breakfast was inspired by your dog’s food. But just hear me out for a second here.

My girl Roux is a super-spoiled pup. Both of her parents work from home which means we cater to her every whim (and whimper, and bark). She gets the joy of all of our impulse buys from going-down-the-dog-aisle grocery trips (so, so many dog toys). And most importantly, she eats like a queen. Chicken and rice when her stomach is upset, lightly scrambled eggs on Sundays, and a small scoop of pure pumpkin puree mixed in with her food a couple of times a week to keep things from getting boring. The puppy LOVES pumpkin puree. 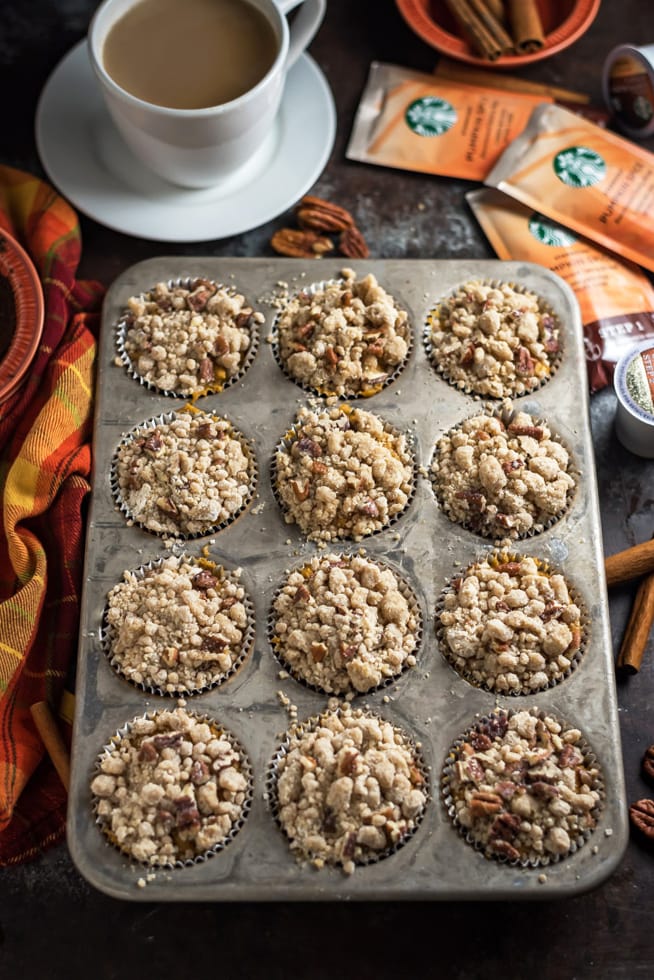 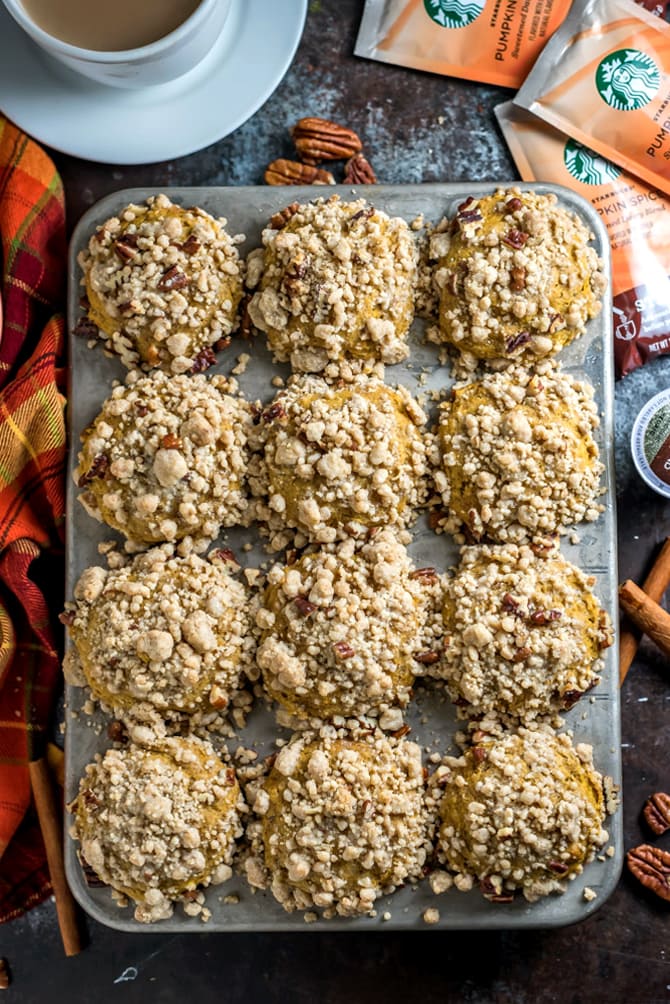 Yesterday morning, in my pre-coffee haze, I was getting some food ready for Roux–pumpkin and all– when I realized that I was getting a little jealous. Yes, seriously.

It’s beginning to cool down around here and, as is customary when the weather dips into “I could technically wear a sweater today and not sweat my butt off” territory, I’m starting to majorly crave pumpkin. Not mixed into kibble, of course, but in the form of cinnamon-spiced baked goods or a hot cup of coffee. Especially a hot cup of coffee. 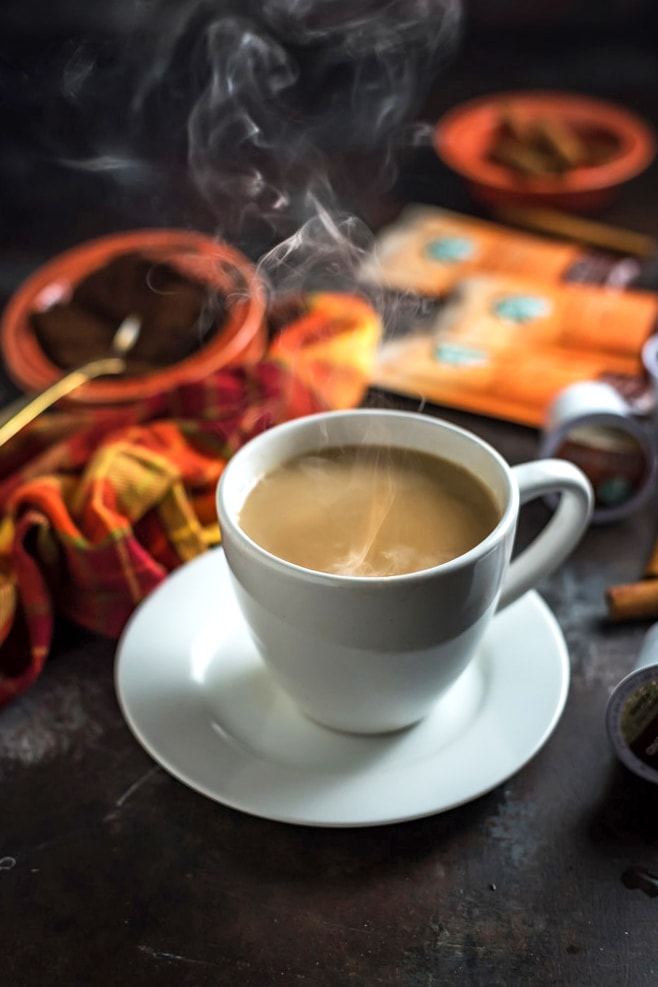 At some point, while I stared somewhat longingly, definitely groggily– and let’s be honest, super weirdly– at the can of pumpkin puree I had set on the table, it hit me. I stocked up on this stuff. I had cans upon cans of it in the back of the pantry. Roux would never know the difference if I stole one for myself.

That pumpkin puree had a much more meaningful destiny. It was about to become Pumpkin Crumb Muffins with Cream Cheese Glaze. 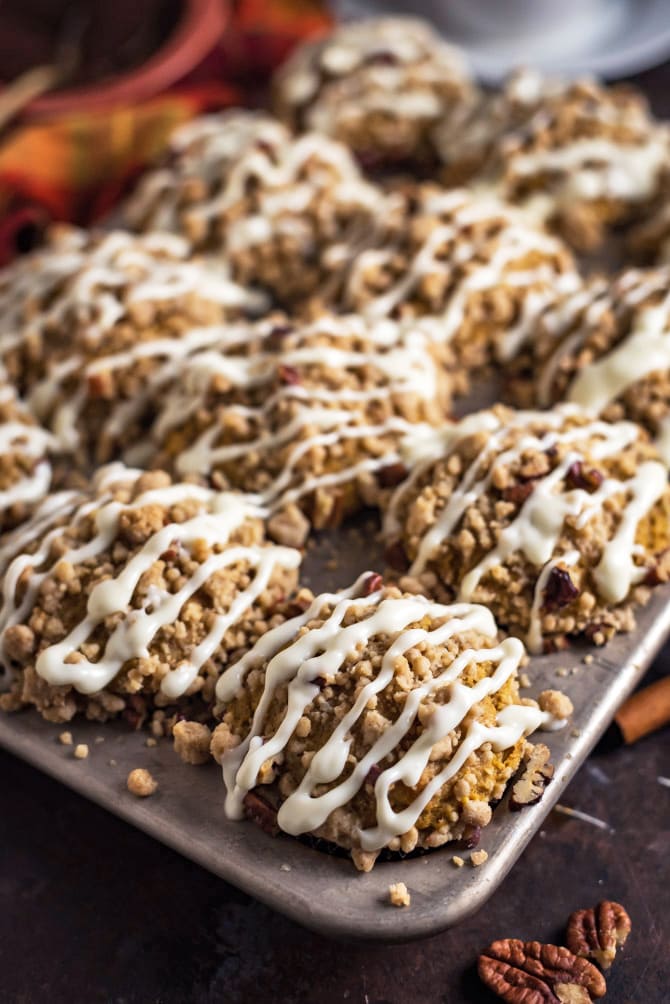 And this coffee-less lady was about to become fully functional because right above the pumpkin puree, I also had several packages of Starbucks® Pumpkin Spice Caffè Latte K-Cup® pods just waiting for a slightly-chilly morning to break out of their boxes.

If you love pumpkin spice, I can’t recommend doing as I do (AKA stocking up on the Starbucks® Pumpkin Spice Caffè Latte K-Cup® pods like it’s going out of style) enough. Because while it’s not going out of style, it does go out of season: it’s a limited-time Fall flavor so you’re going to want to make the most of it while it’s still around. Get yours at ShopRite in the coffee aisle, and watch your mornings instantly get a little lovelier. 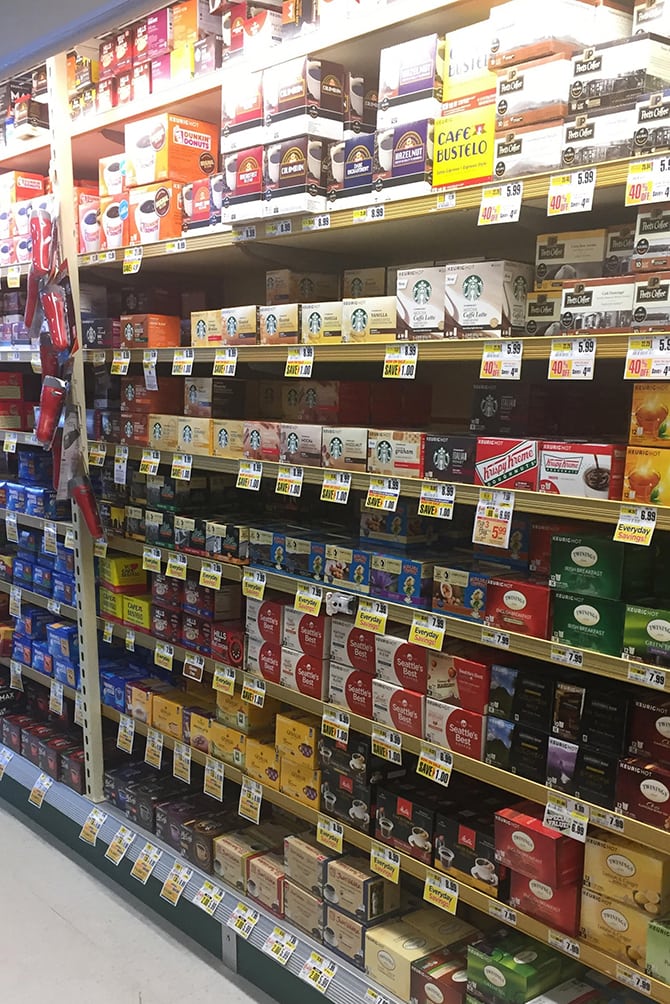 Now, I consider myself to be a bit of a pumpkin coffee connoisseur, but I have to say that the Pumpkin Spice Caffè Latte is hands-down the tastiest pumpkin coffee I’ve ever tried, especially if you factor in making it in the comfort of my own home. Not only is it velvety rich and creamy without needing to add any additional creamer or milk, but it also has the perfect mix of cinnamon and nutmeg without overpowering the pumpkininess of the coffee.

Oh, and did I mention that the Starbucks® Pumpkin Spice Caffè Latte includes actual real pumpkin? Yup, I was able to get my pumpkin fix before I had even started mixing up the muffin batter. Which was nice, of course, because it made me a heck of a lot less impatient. 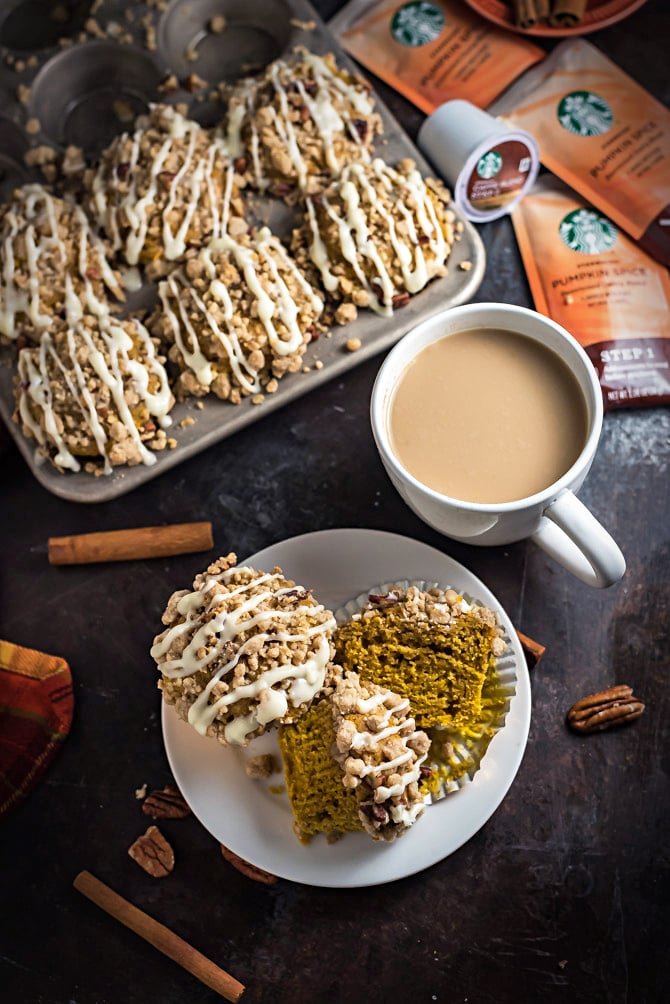 I created the Pumpkin Crumb Muffins by tweaking a beloved pumpkin cake recipe of mine from years back, and not to pat myself on the back too hard, but man, they make one beautiful breakfast. They’re not cloyingly sweet and airy as some wannabe-muffins tend to be (you know the kind– the ones that are basically cupcakes without frosting), instead they’re dense and delicious and more inline with a pumpkin bread than they are cake, despite being adapted from one.

Best of all, the fact that the base isn’t super-sweet means that we get to enjoy both a crumble and a glaze on top.

That pecan-studded streusel and cream cheese glaze taste even better in between sips of the Pumpkin Spice Caffè Latte, by the way. Trust me. Or trust the guys, who literally ate multiple muffins while sipping their lattes and smiling the biggest smiles I’ve ever seen those two have before 10 AM. Or trust Roux, who had neither muffins nor lattes, but who sure did enjoy sniffing the pumpkin-spiced air for hours. She knows a great thing when she smells it. 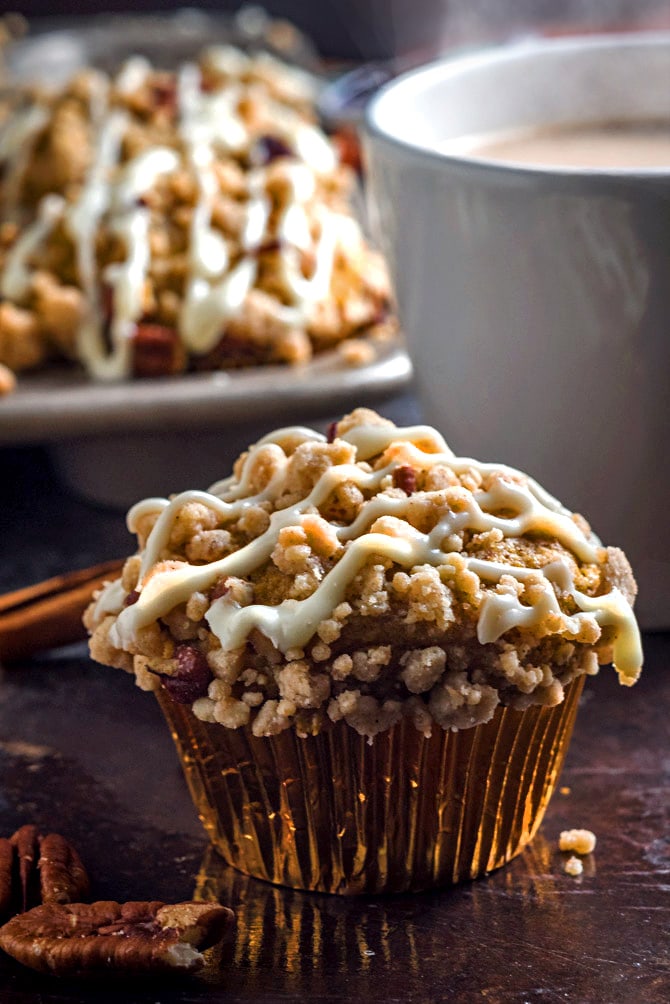 Go on, make the most of this pumpkin season (or Fall, if that’s what you want to call it) while it lasts.

For the muffin base:

For the crumb topping: