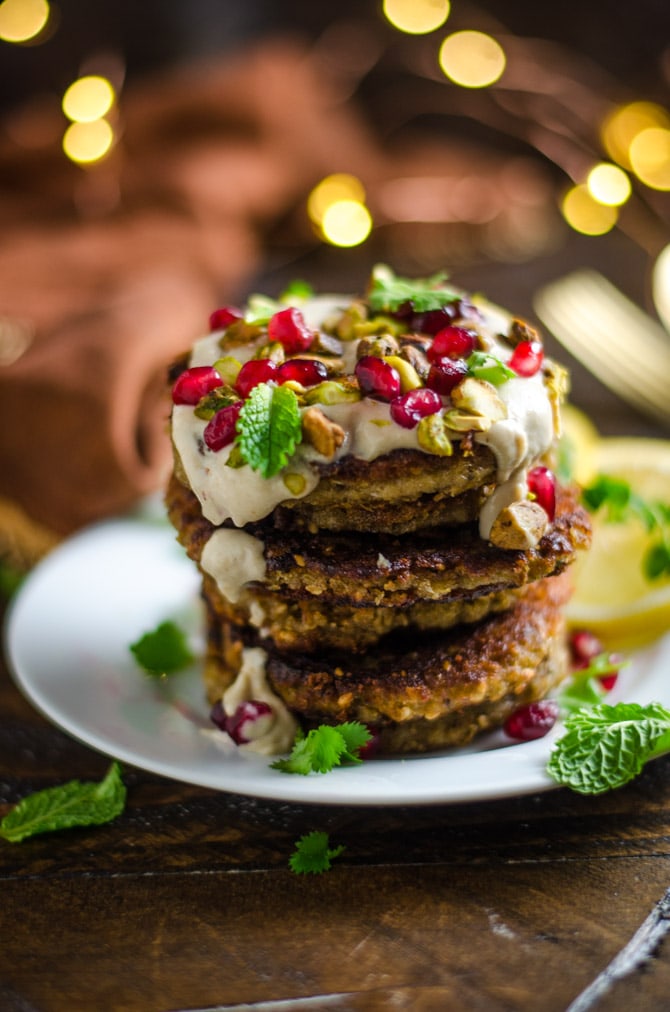 I won’t sugarcoat it: 2016 has thoroughly and relentlessly kicked my ass. In fact, if social media is to be believed, it has kicked all of our collective asses. But all of that blubberin’ that I love to do aside, we’ve had a phenomenal year in food, don’t you think?

I don’t know about you, but I’m pretty happy to say that with every year that goes by, my recipe repertoire skyrockets. I stumble across new ingredients, new restaurants, and new favorite dishes. And in that way, the past 12 months have been surprisingly kind to me.

So before we pop the champagne and sip our way into the new year, I wanted to share one last new and exciting recipe that made 2016 a bit more delicious: Roasted Eggplant and Feta Fritters with Tahini Sauce. 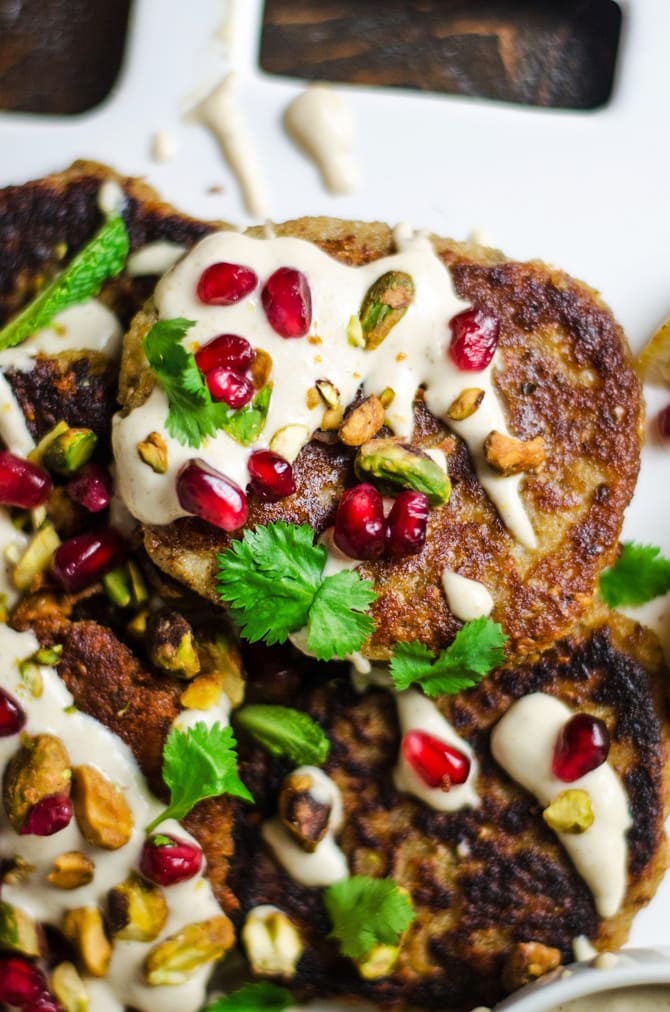 I wasn’t sure where I was going with this recipe when I started, to be honest. All I knew was that I’d been craving eggplant for weeks and I was dead-set on finally devouring some in a brand new way. Is it okay to admit that “eat them” was the extent of my planning when I first popped my eggplants in the oven to roast? It wasn’t for a lack of ideas– I thought of a million things I could do with the savory, creamy eggplant flesh. Would I mold it into mini meatless meatballs? Or scoop it out and stuff the skins? Or toss it with pasta? Would I mash it with garlic and spread it over some pizza crust? (Actually, that all sounds delicious. Maybe next time.) The point is, I had no clue.

I went into this recipe thinking that I’d let my hunger guide me through the process– something that I very rarely do since I typically have to meticulously plan out my grocery shopping. And the second I pulled that wrinkled, soft eggplant from the oven, guiding me to glory is exactly what it did. The eggplant was destined for fritters all along. Destined, I tell you. 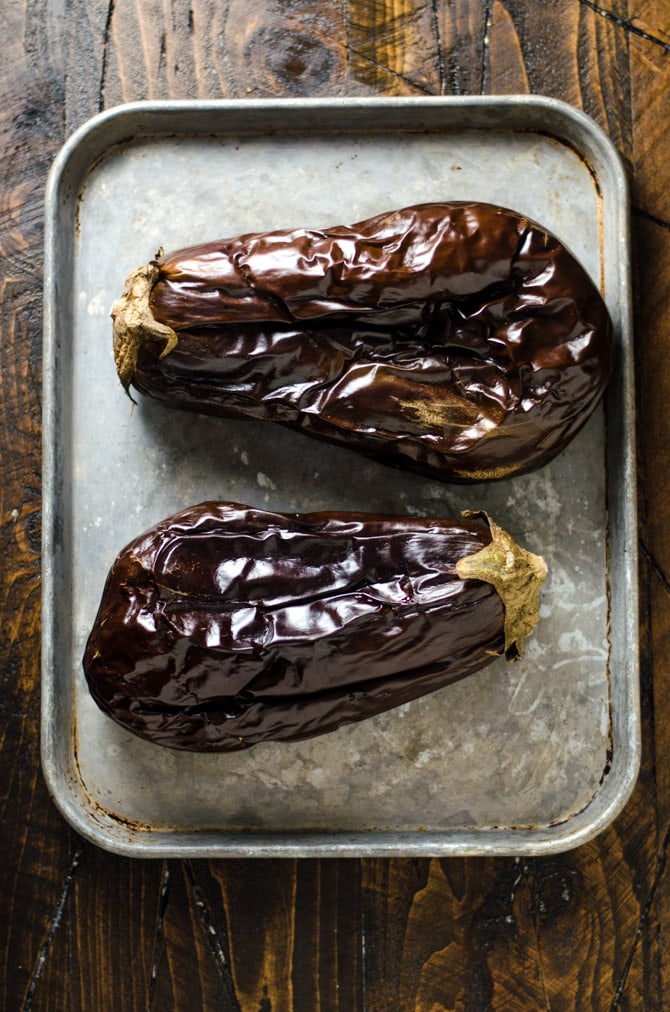 The thought of a super soft and creamy eggplant interior surrounded by a salty, crispy crust had my mouth watering before I even began to scour my fridge and pantry for ingredients. I had a variety of fresh herbs to use up, a lonely shallot, plenty of garlic (because the number one rule in my house is to ALWAYS have enough garlic on hand to make a 30 pound lasagna, you know, in case of an emergency in which I’d need to make a 30 pound lasagna), and as fate would have it, a big ol’ block of feta cheese calling my name. Thank you, refrigerator, for being so good to me. 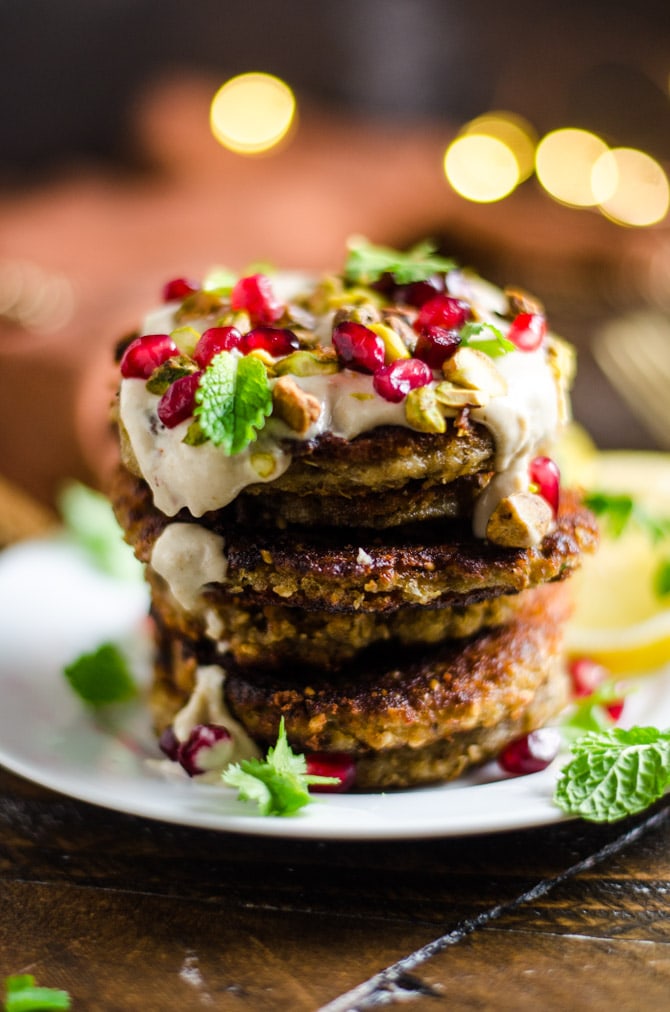 I threw all of those newly unearthed ingredients along with the eggplant into the food processor, then seasoned with lemon pepper, cumin, and salt. Once I got it all whirred together, it became the consistency of a smooth spread. And spread it, I did– onto several pieces of pita bread. It’s called taste-testing, guys. Or a deficit in the self-discipline department. Whatever, I’ll add that to my long list of resolutions, I guess.

The mixture was creamy, subtlety sweet and meaty, and surprisingly rich despite the fact that no fats of any sort had been added. I could have served it just as it was and loved every bite of it, to be honest. But like I said earlier, this eggplant had a destiny, and it needed a boost in texture and thickness if it was ever going to become an appetizing bunch of fritters. Thankfully, a heap of breadcrumbs and sesame seeds is all it took.

Maybe you’re like, “Hold up, sesame seeds?” and I get it. It seems like an unusual addition for fritters. However, the nuttiness and delicate crunch of the seeds totally transformed the eggplant mixture into something worth fawning over. The contrast between the creamy eggplant flesh, the melted feta cheese, and the tiny seeds made this recipe much more than the sum of its parts. And if it still sounds strange, remember that tahini sauce owes the bulk of its flavor to sesame seeds. You know, tahini sauce, the glorious creation that I decided to slather these with, and proceed to pour over literally every edible food that was tucked away in my house over the next couple of days? Yeah, that. 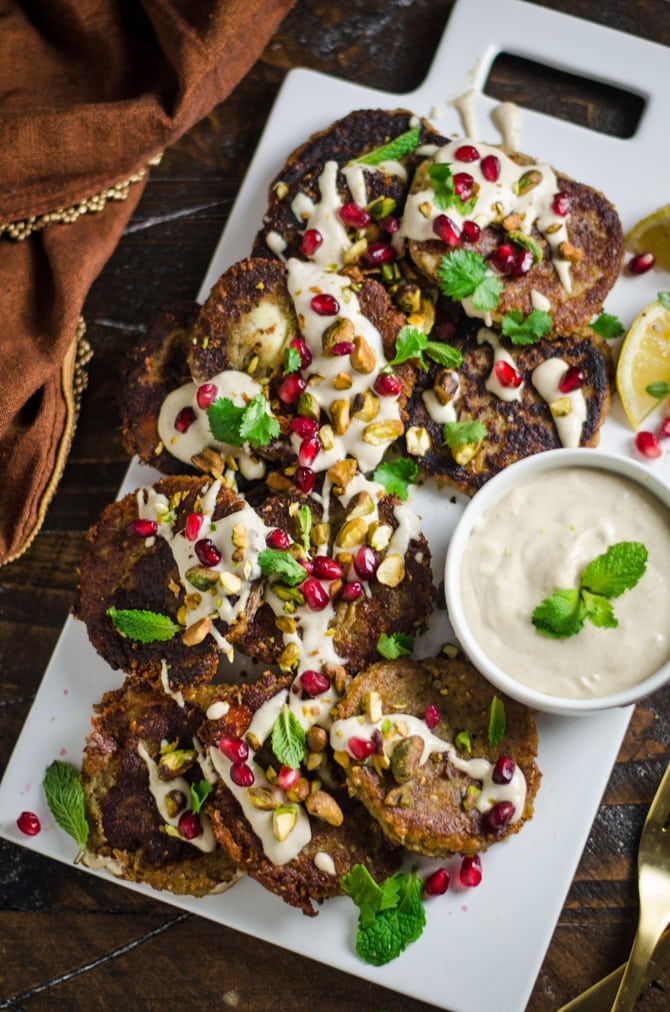 If you’ve never had tahini sauce, this post right here is the universe telling you that you simply cannot enter another calendar year without trying it. The ingredients are simple: tahini paste, more garlic, lemon juice, water, and salt. The flavor, though, feels far more complex. It’s tangy and nutty and earthy and absolutely addictive on appetizers, meats, and vegetables. Best of all, you’re able to throw it together in the amount of time it takes to roast the eggplant.

And that’s not the only quick and easy part of this recipe– shallow frying the Roasted Eggplant and Feta Fritters only takes the tiniest bit of time. To crisp them up, I simply scooped some of the eggplant mixture into a pan of hot oil, let it brown, flipped it over and flattened it slightly, and then let it get nice and crunchy on the other side. It took all of 5 minutes per batch. We only have a few hours of 2016 left, guys. We don’t have time to waste. 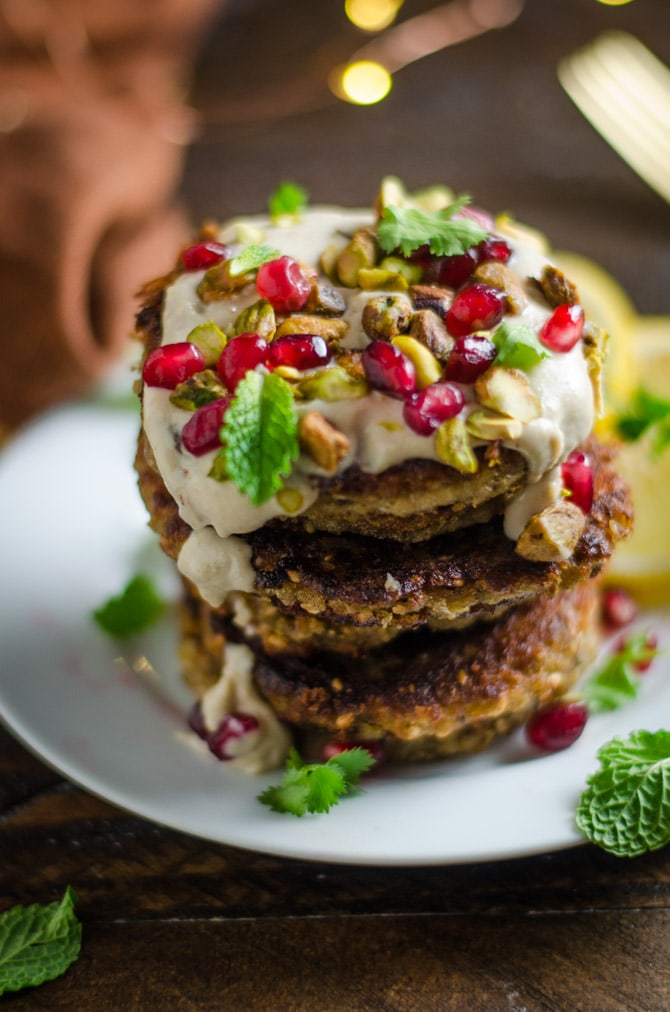 On that note, I’m going to wrap this post up to give you enough time to run to the grocery store in case you decide to make these tonight for your New Years Eve party. If you do, don’t forget to take a picture and tag #hostthetoast on Instagram to show them off!

I’m looking forward to having a delicious 2017 with you along for the ride and reads. Have a happy and safe NYE!

For the Roasted Eggplant and Feta Fritters:

For the Tahini Sauce: