This recipe for Sheet Pan Cheesesteak Nachos was also featured on Serious Eats. 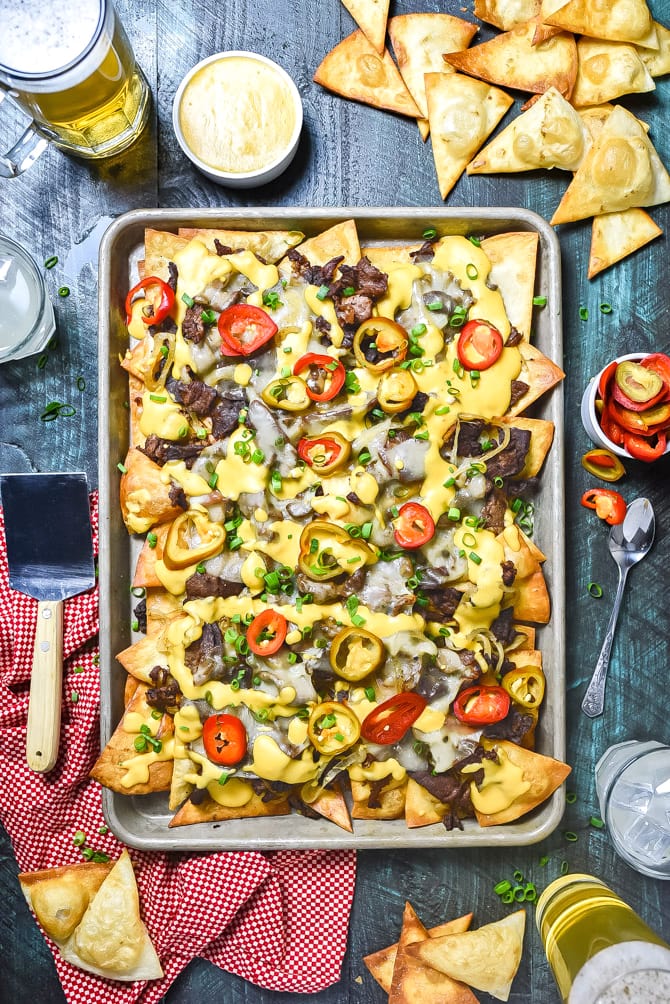 Unless, of course, they were the kind of “nachos” you get at the movie theater, with their stale chips and very-fake-tasting cheese sauce, because those are tragic. I’ve made the mistake of ordering nachos instead of popcorn at the theater before and that’s the sort of thing that, yes, I might cry about. (It doesn’t take much. I cry at commercials. Not even just the Sarah McLaughlin animal rescue commercials– I cry at commercials about senior care, and confronting stereotypes, and anthropomorphized piggy banks. I’m soft.)

I guess I what I should say is that I never imagined I’d be sad eating good nachos. Genuinely tasty nachos with freshly-made tortilla chips, good quality steak, and homemade cheese sauce using real cheese. But as I took, like, my third bite of these Sheet Pan Cheesesteak Nachos on Sunday, the Eagles lost the divisional playoff game against the Saints, and eating game day food literally inspired by the city of Philadelphia was a bit like rubbing salt in the wound. 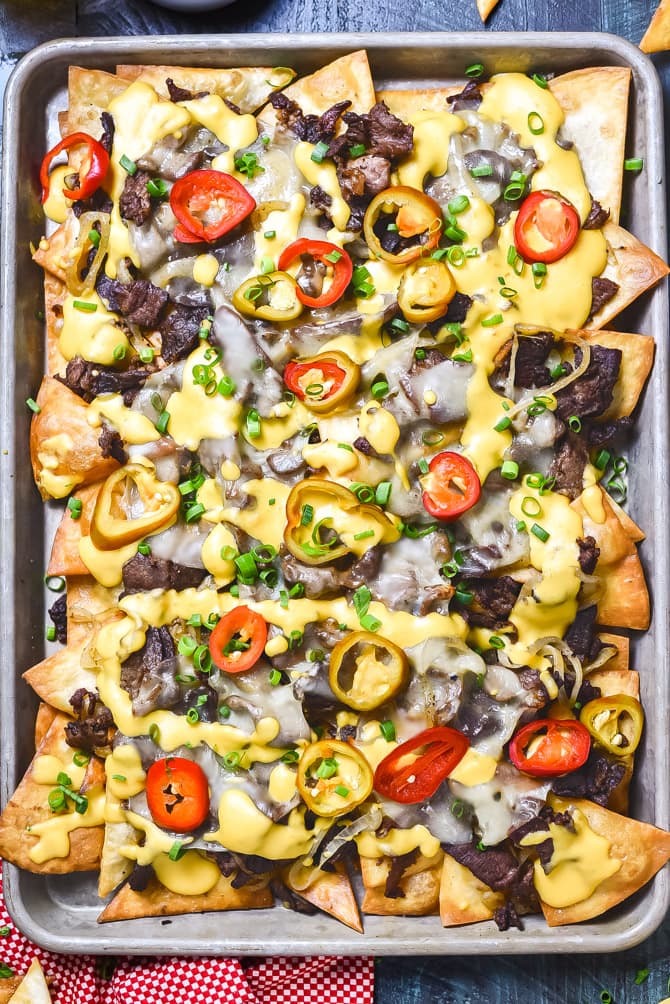 Don’t get me wrong, I still ate them. A lot of them. And eventually… Eventually, it began to feel a little less like mourning the loss and a little more like celebrating how far they got, you know?

I’m just kidding. There was no deep moral value that arose at that point. I just got over it and decided to enjoy the snack for what it was– some damn delicious nachos. 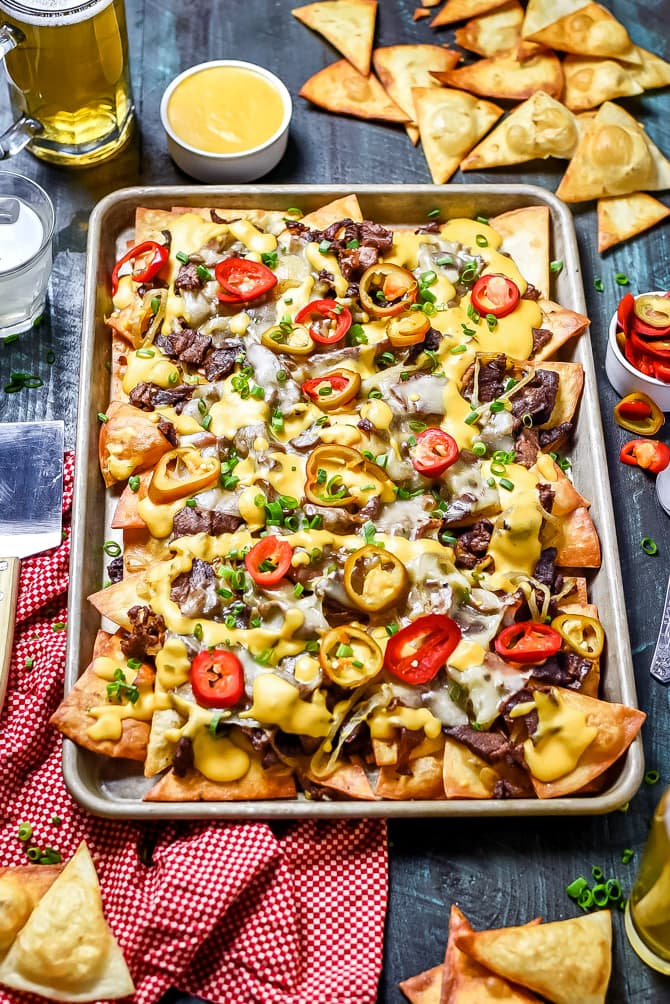 For all of their deliciousness, these nachos require a little work, I’m not going to lie to you. But there’s something amazing about digging into a truly perfect pile of nachos rather than just dumping a bag of tortilla chips onto a plate and sprinkling them with cheese and salsa. Trust me, these are worth the effort.

First, we make the chips. Because a proper Philadelphia roll is integral to a great cheesesteak (and those rolls, by the way, should be crusty on the outside with a chewy, airy interior), great tortilla chips are key to these nachos. To make them as close to a Philly roll as possible, I decided to use flour tortillas, which get similarly crisp on the outside while remaining airy and chewy in the center. All it takes is slicing a bunch of tortillas into eighths, frying them in a bit of oil until they’re golden and puffy, and then sprinkling the chips with a bit of salt. Easy.

Next, we focus on the onions. Not all cheesesteaks need onions, but I always get them on mine, and since we’re making loaded nachos, more toppings always win. After draining off the oil from making the tortilla chips, I saute the onions until they’re just beginning to turn yellowish (not caramelized!) and move them to a bowl while I move on to preparing the meat. 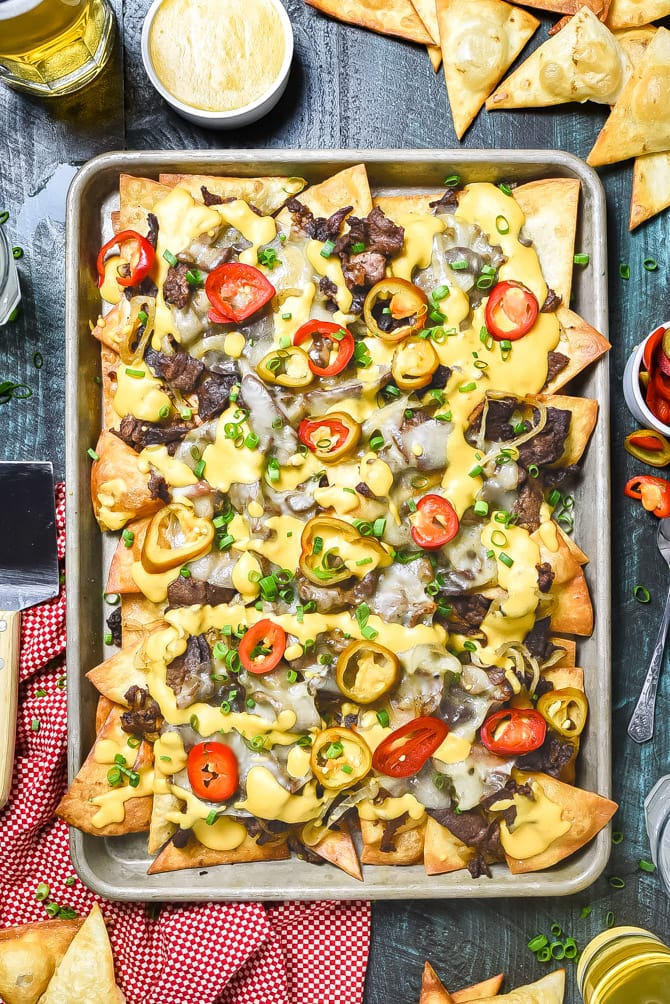 If you’re wondering what kind of meat to use for cheesesteaks… well, you use steak. Real steak, not Steak-Umms. (Though I’m not hating on Steak-Umms. They serve their purpose.) Generally, Philadelphians agree that boneless ribeye is the best cheesesteak meat, but sirloin is also a great option. Go with whatever is easiest to find and within your budget.

You can’t just use strips of steak like you would for fajitas when you make cheesesteaks. You want your steak to be as close to paper thin as you can get it. Now, I’m no slicing savant, so I freeze the steak until it’s mostly firm before slicing with a sharp knife. After about 2 hours in the freezer, the steak is firm enough that I’m able to get very thin slices that don’t smush when I cut. Once all my slices are good to go, I season them generously with salt and pepper, and very quickly cook them in a hot pan until browned all over.

Then I scatter the tortilla chips onto a large baking sheet and load them up with the steak, onions, and provolone cheese. It takes about 10 minutes in the oven to fully melt the provolone and heat everything through.

As the Sheet Pan Cheesesteak Nachos are baking, I make some cheese sauce (to satisfy the “whiz” fans out there, and also because more cheese is always a great thing). Instead of using jarred cheese whiz, I toss shredded cheddar cheese with cornstarch and whisk it in a pot of warm evaporated milk until melted and smooth. A little vinegar and Worcestershire sauce make the flavor a bit more whiz-like, and by the time it’s all melted and good to go, the nachos are ready to serve.

Finally, I ladle the cheese sauce over the nachos, toss over some sliced hot cherry peppers, and sprinkle with green onions. Then it’s time to dig in. 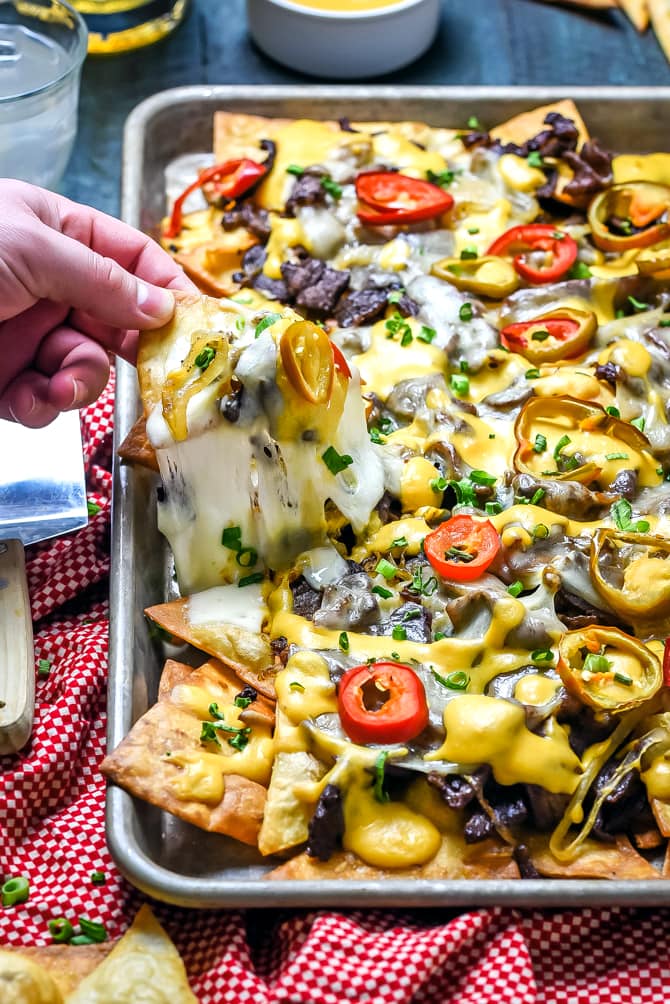 Whether you make them for a playoff game, the Super Bowl, a party, or just as a weekend treat for your family, you really can’t go wrong with these Sheet Pan Cheesesteak Nachos. Now I just have to figure out how to smuggle them into the movie theater…