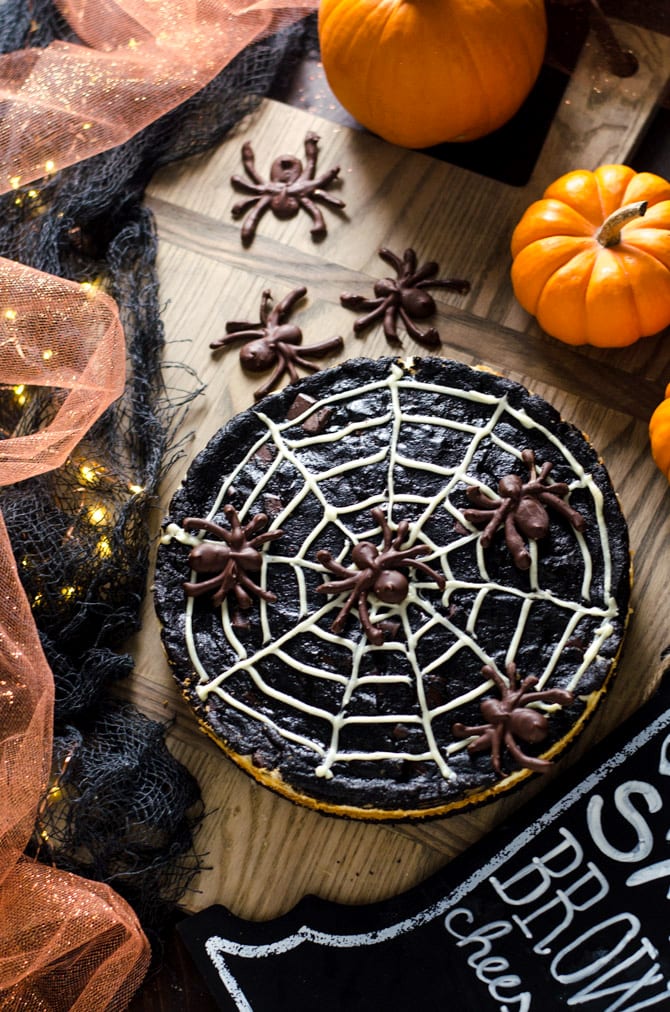 For about 315 straight days every year, you could call me a Halloween costume visionary. From pop culture to punny to straight up scary costumes, I’m a veritable goldmine of ideas. “How ever will I choose?” I ask myself, but of course I never write down my favorites, because that would be the smart thing to do, and I’d rather chance it for absolutely no logical reason whatsoever…

… And then, like clockwork, right around September 10th each year, I forget every single creative costume that ever crossed my mind. Just poof, gone. I scour the internet for inspiration but wind up with more questions than answers. How could I make that costume but with, like, 100% less effort? Why is “sexy Harambe” a thing? Will I get shot if I dress up as a clown this year? Really, how did I forget all of the good potential costumes? And so on and so forth. The same story goes for Halloween decoration ideas and Halloween recipes. 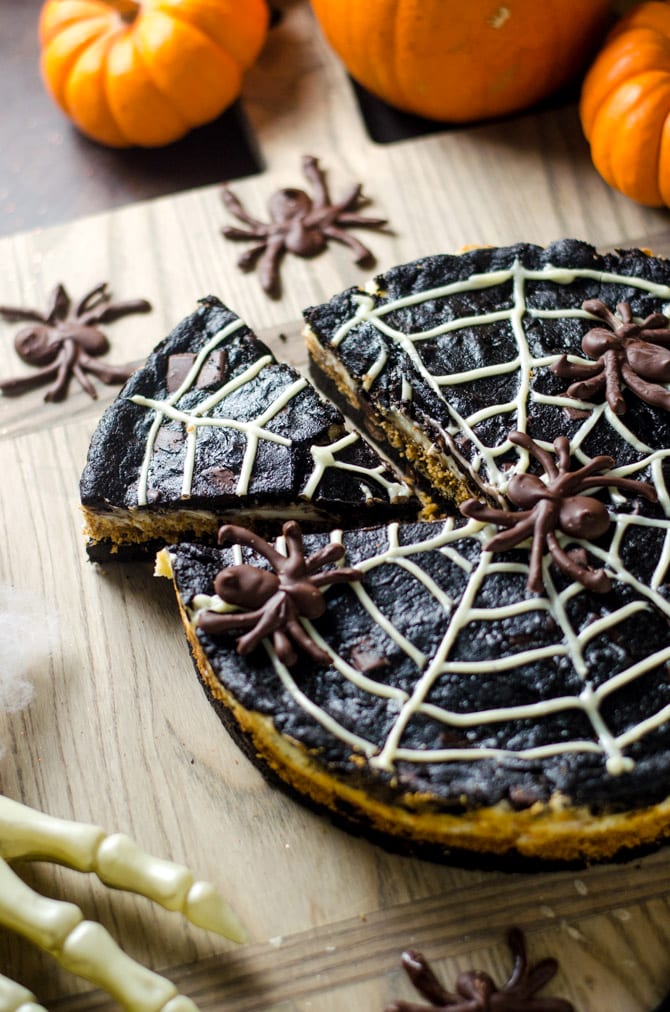 But there is one thing that I thought of waaaay back last year that has stuck in my mind ever since: Spider Web S’more Cheesecake Brownies. I imagined gooey, dark (nearly black) chocolate layers of brownie; surrounding a creamy, marshmallow-spiked cheesecake layer; and an orangey, crunchy graham cracker layer in the center. There would be a spider web created from cheesecake swirl on top, and spiders made from melted chocolate to garnish.

That’s the kind of dessert you just don’t forget about. 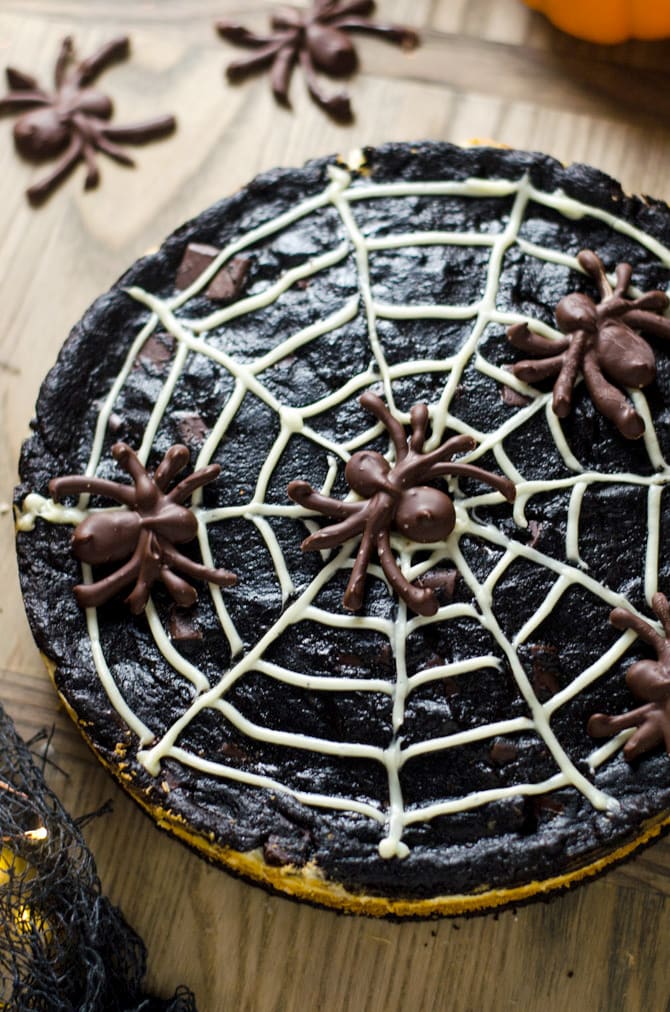 And boy, am I glad I didn’t. The brownies are so moist, the cheesecake is so velvety, and all-together it makes one killer dessert. Get it? Killer, because it’s Halloween-themed? Ha, hilarious.

The Spider Web S’more Cheesecake Brownies are baked in a springform pan or cake pan, which makes them seem less like brownies and more like a pie at a glance, especially when you cut the brownies the way that I did. However, the bulk of the “pie” is made up of deep, fudgy, brownie batter, which secures its spot firmly in the brownie category, regardless of its shape, and, yes, regardless of the fact that I messed up and wrote “brownie cheesecake” instead of “cheesecake brownies” on my tombstone chalkboard and didn’t notice until long after I took these pictures. I know one of you would have called me out for it 😂

If you prefer square-shaped pieces, you can always make this is a square cake pan instead, but I just think the wedge-shaped brownie slices look so pretty! 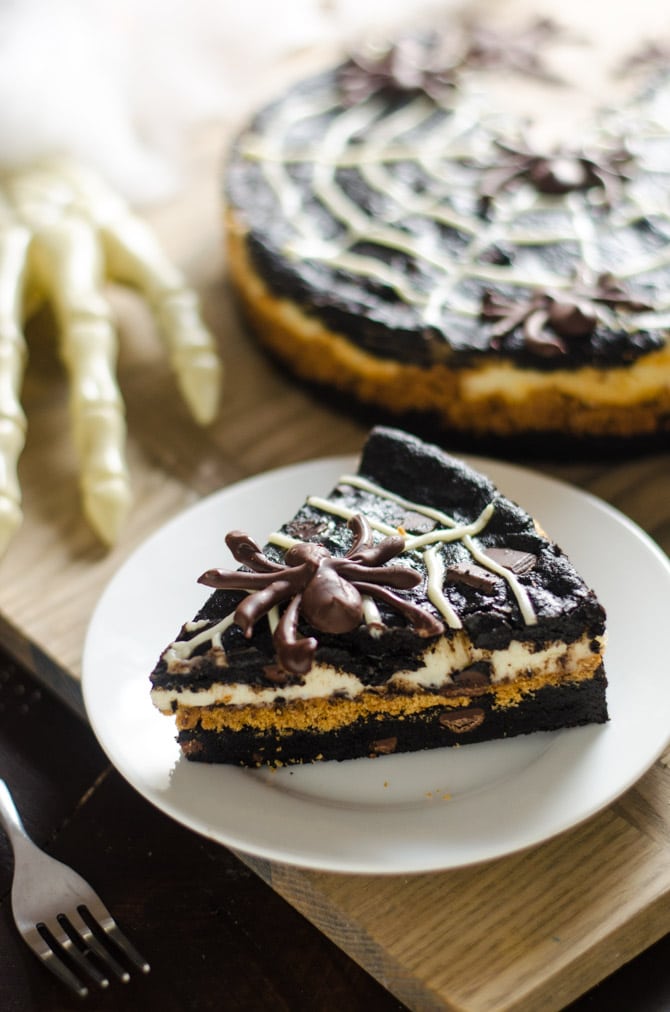 It might seem like this dessert requires a lot of work or is too complicated, but it’s actually surprisingly simple. Seriously, you can do it!

First, make the brownie mixture and cheesecake mixture in one bowl, each. Then, partially bake half of the brownie batter into the first layer. Next, spread buttery, crushed graham cracker crumbs over the brownies, and smooth out all but 1/4 cup’s worth of the cheesecake over top. Layer on the remaining brownie batter and make sure everything’s even.

Then, spoon that remaining 1/4 cup of cheesecake batter into a piping bag (or sealable plastic bag with the corner snipped off) and draw a large spiral on top of the brownie. Draw straight lines radiating out from the center of the spiral, and you’ve got yourself a spider web. Put the cheesecake brownies back in the oven to finish baking and work on the chocolate spiders.

Even if you’re artistically troubled, you got this. Melt chocolate with a tiny bit of vegetable shortening in the microwave. Once it’s totally smooth, spoon it into a piping bag or plastic squeeze bottle. On a sheet of wax paper, draw the spiders by following the steps below:

Then let them harden until the brownies are baked and totally cooled. When you’re ready to serve the Spider Web S’more Cheesecake Brownies, peel the spiders off of the wax paper and place them on top of the brownies. That’s all it takes to make the brownies perfectly Halloween-worthy.

Who ever thought that spiders could be so adorable, right? 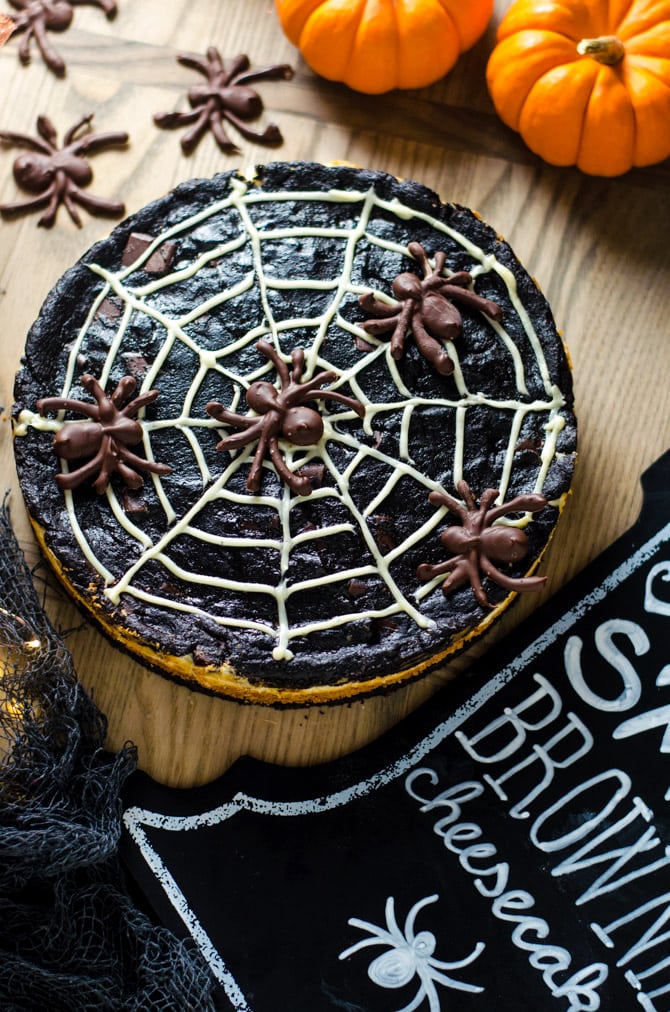 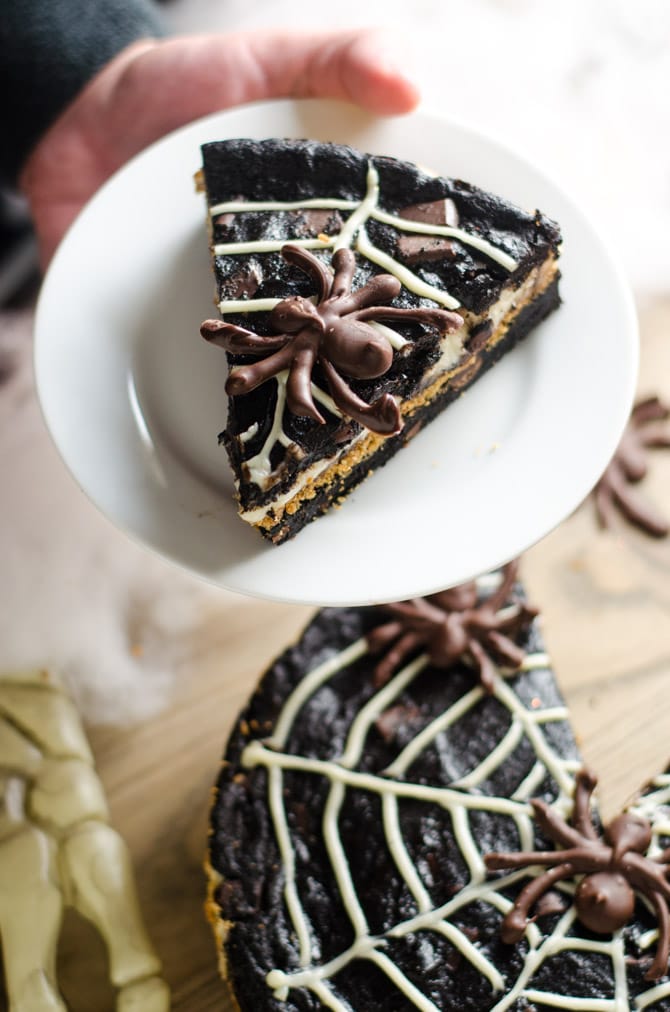 You don’t want to just dig in without taking a picture, of course, so before you serve this spooky dessert, be sure to snap a photo and tag it on Instagram with #hostthetoast. That way, it will show up on the You Made It page, and I can show it off! Yeah, I’m like a mom hanging drawings on my fridge. You guys just make me so proud.

Oooh before I forget, I did finally come up with a Halloween costume! James and I are being Zombie Pirates or Pirate Zombies or Kinda-Like-Davy-Jones-But-Minus-The-Tentacles? It’s not nearly as cool as my long-forgotten costume ideas were, but I’m pretty pumped about doing up my Halloween makeup, and even more excited that I somehow got James to agree to letting me paint his face for our mini Halloween party.

And yes, I currently have these Spider Web S’more Cheesecake Brownies in the freezer so that I can serve them at the party, too. No one will even notice that missing slice… right? 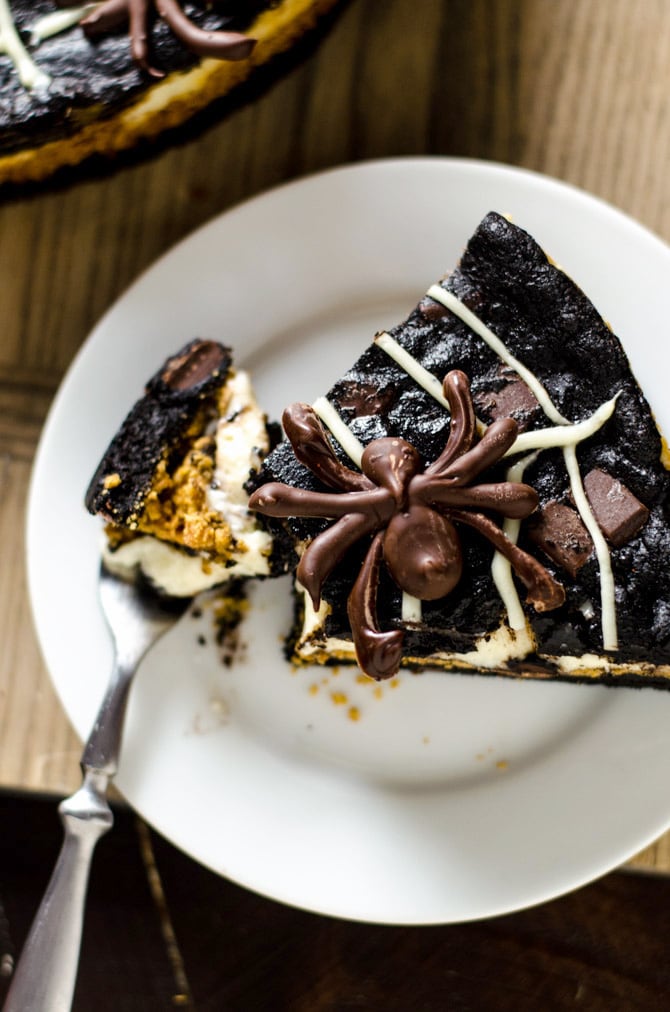