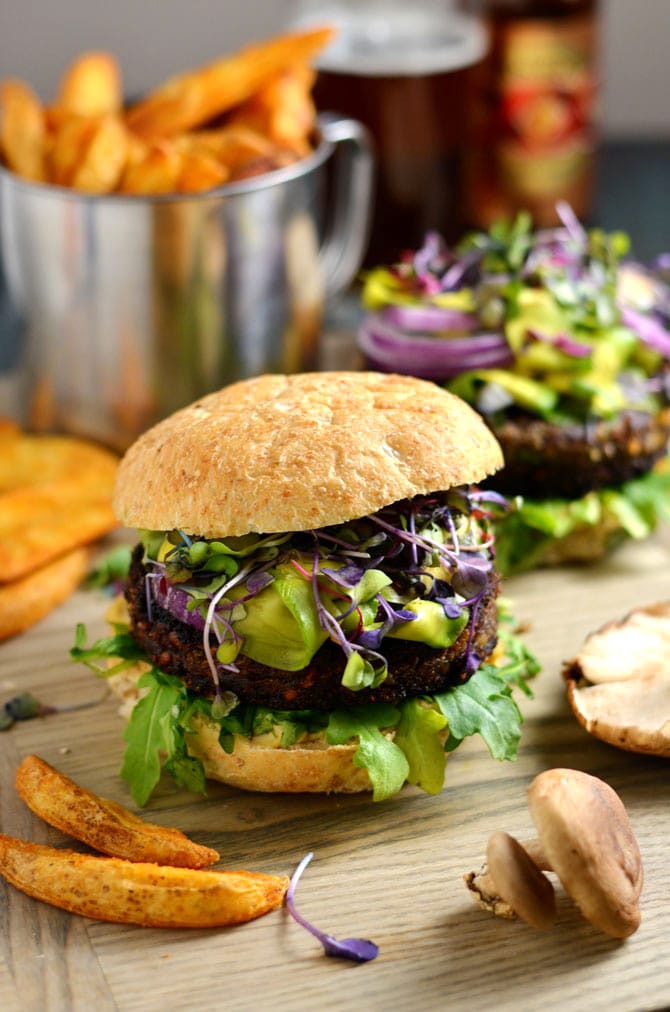 Ah, umami. Prounced like the catcall (“ooh mami”), but much more likely to get single men results. I don’t think any of my friends have ever responded favorably to shouts on the street– I know I haven’t– but an explosion of savory flavor in the kitchen? Well, that can really woo a woman.

All joking aside, I made this recipe to get people to fall in love… with veggie burgers. Or more accurately, with mushroom-barley burgers. How do I intend to do that? With an unapologetic shit-ton of umami, of course. That’s why I call these bad boys Umami Bomb Mushroom Burgers.

Yes, “bad boys” with pretty avocado ribbons and colorful radish sprouts on top. Don’t judge a book by its cover. 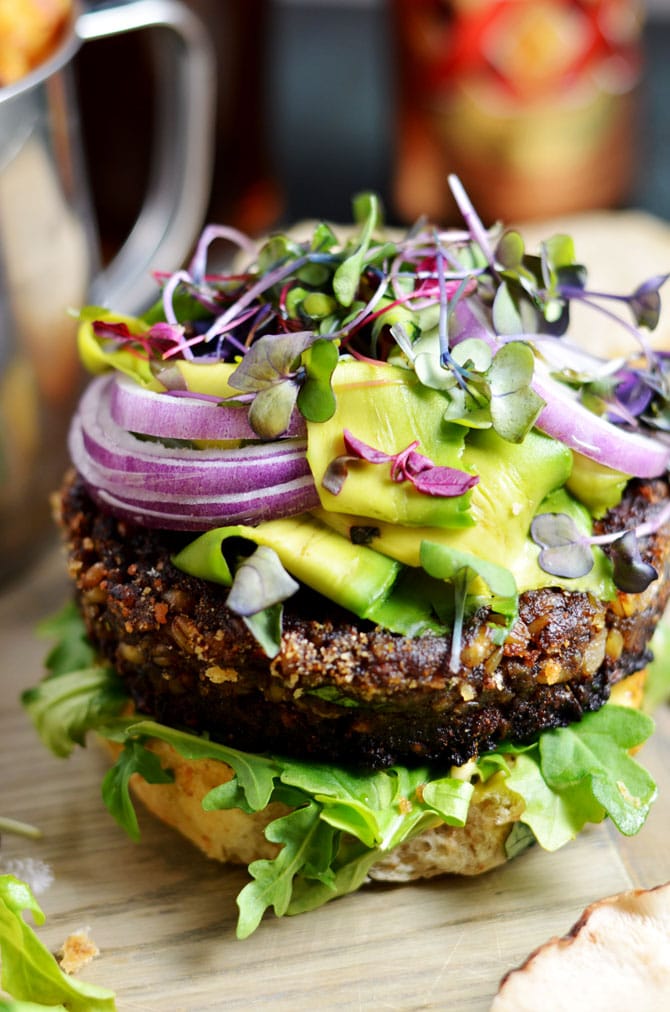 So, what exactly is umami? Well, it’s the black sheep of the 5 basic tastes (you know, along with sweet, sour, salty, and bitter) because it’s used a lot less often to describe food unless you happen to hang out with food snobs on the regular. The word itself is Japanese, meaning “pleasant savory taste”, but it’s a lot more complex-tasting than just simply savory. I personally think of umami as “the meaty taste”, even if what I’m eating it in happens to be entirely meat-free.

The taste of umami is thanks to something called glutamate, as in the flavor enhancer with the bum rap, monosodium glutamate AKA MSG. But not to worry! If you’re not down with MSG, then there are naturally-occurring glutamates in tons of other foods! For example, mushrooms, parmesan cheese, sun-dried tomatoes, soy sauce, and Marmite are all loaded to the freakin’ gills with the stuff.

So of course, I decided to make a veggie burger out of all of them. No regrets. 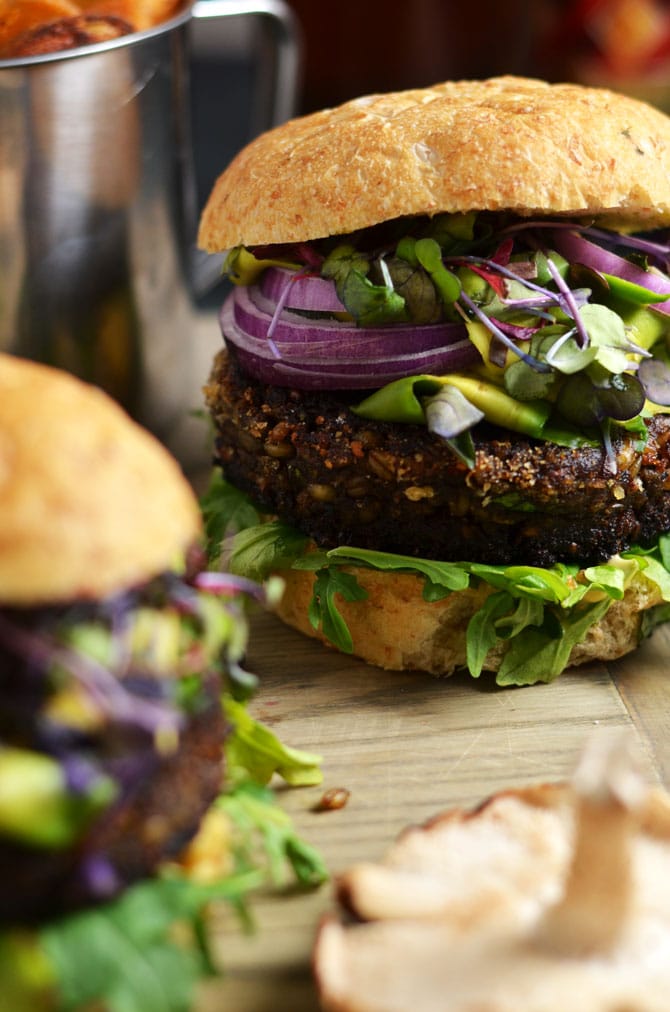 Despite being an omnivore, I’m no stranger to meatless burgers: the good, the bad, and everything in-between. I love a great Mexican-seasoned black bean burger, or a curry powdered chickpea patty, but my absolute favorite is when a veggie burger tastes just, well, burgery. This Umami Bomb Mushroom Burger does exactly that. And because the only thing I hate more than a bland burger is one that either texturally reminds me of baby food or cardboard (and let’s be honest, there are a lot of veggie burgers that fall into those categories), I added in barley and panko breadcrumbs for binding and chewiness. 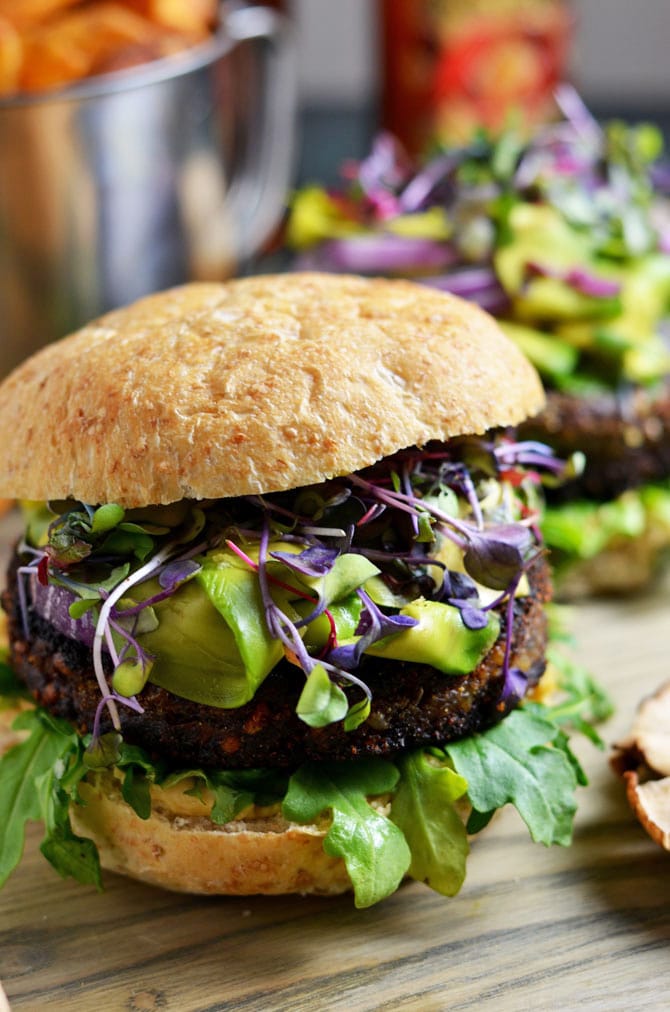 All together, they’re irresistible. They’re not at all beefy, but I think most meat-eaters (who like mushrooms, of course) would be pleasantly surprised at just how tasty these Umami Bomb Mushroom Burgers are. Give it a try and let me know what you think! And while you’re at it, don’t forget to take a picture and tag #hostthetoast on Instagram or Twitter.

For the avocado ribbons, halve and peel the outside of the avocado. Using a vegetable peeler, peel the avocado flesh into strips and then roll them up as desired.