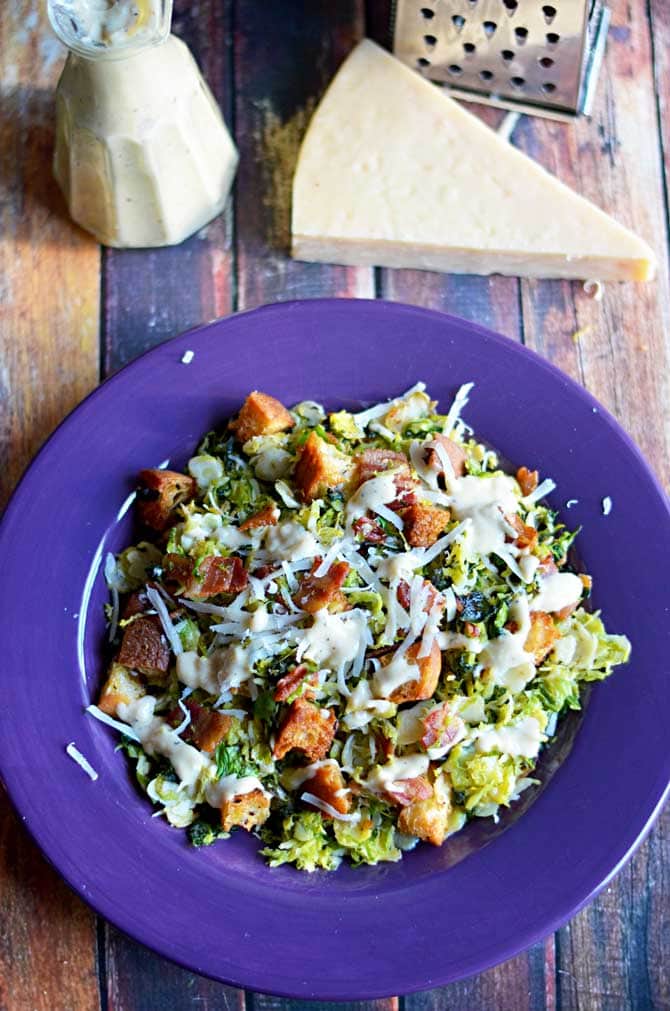 It actually is really fun for everyone who comes, but I get overly excited.  For example, CDN gave out thermometers and I think I freaked out the representative with how pumped I was about it.  I was beaming from ear to ear and kept telling him, almost aggressively, about how happy it made me.

He was really nice, but the look on his face was like, I am slightly scared of you.  Take the thermometer and leave, crazy lady.  I’d back away slowly, but I’m stuck at this table.

I’m okay with admitting that I get all sorts of amped up for things that other people might find a little bit weird.  Another prime example of that would be my reaction to brussels sprouts.  Oh man, I love those things. 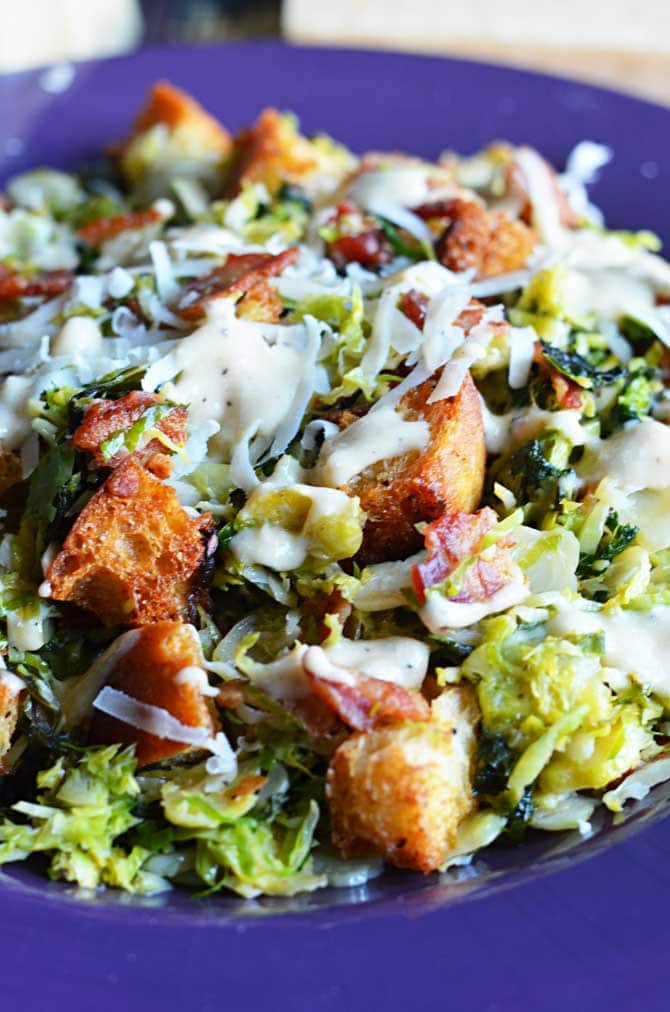 I know it sounds nuts, but you’ve gotta trust me here.  Brussels sprouts are amazing when they’re done right.

Last year, I discovered my love for sprouts and made these Roasted Honey Balsamic Brussels Sprouts with Bacon and Pomegranate Seeds.  YUM.  Since then, I’ve been trying to think of a new way to scarf them down.  With Thanksgiving around the corner, I thought maybe I could turn them into a salad to serve with dinner.  A lot of people have been making salads lately with brussels sprouts served raw and shredded into a sort of slaw, so I considered doing that. 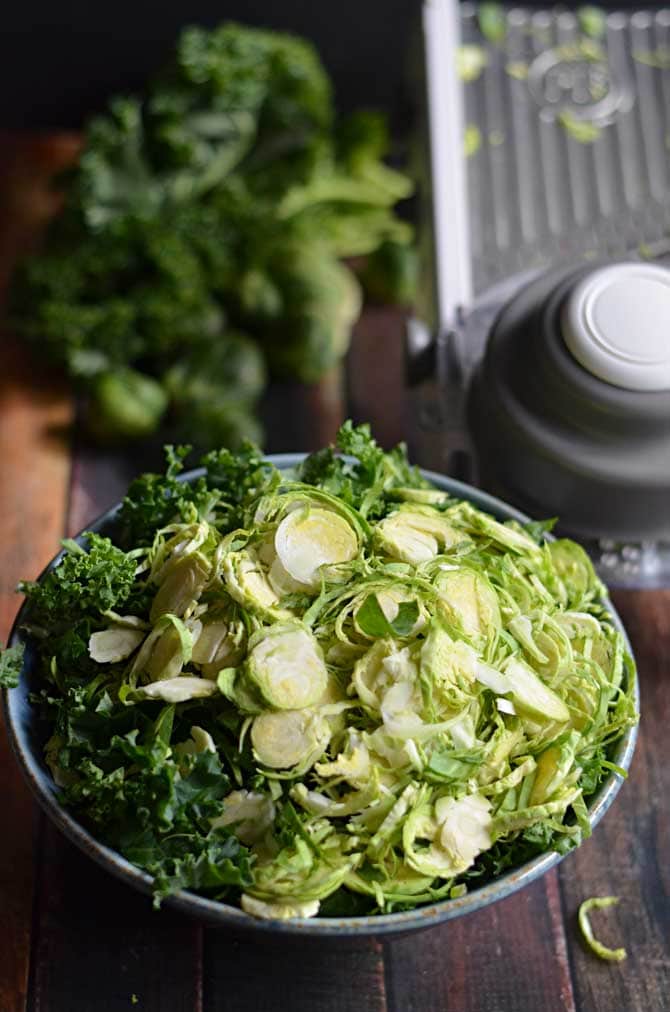 But then I came up with the idea of sauteing them in bacon drippings, and there were no second thoughts.  I added some kale to get in some extra vitamins and nutrients (and I can now claim that this is a kind of healthy dish).  Wouldn’t you know it, kale is also delicious with bacon.

This Warm Brussels Sprouts and Kale Bacon Caesar Salad is so fantastic, you won’t believe it.  My friend Kait came over when I made it last week and she was disappointed when I told her what I’d be serving up.  “I guess I’ll try it,” she said.

Well, she tried it, and then she had 2 bowl-fulls.  I took a bit, and then my mom ate the rest of it.  My mom, who usually claims that she doesn’t like kale or brussels sprouts. 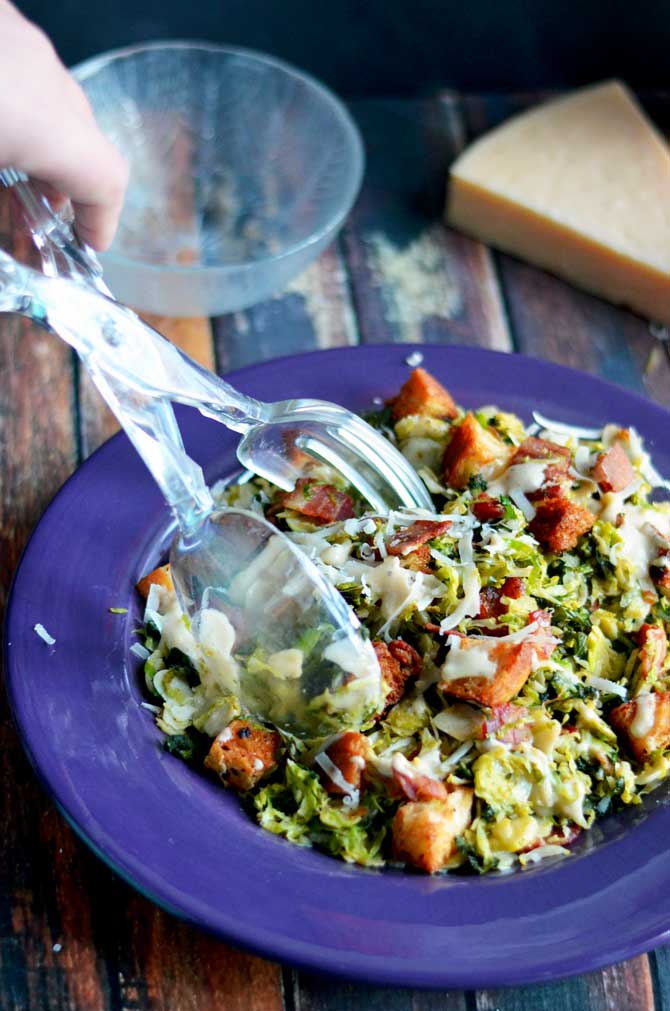 I keep talking about the brussels, bacon, and kale, but the real MVP here might be the Caesar dressing.  It is so good, you will never buy Caesar dressing from the store ever again.  James has said that it’s the best he’s ever tried, and we’re self-proclaimed Caesar salad aficionados.

For this recipe, I used the PL8 Mandoline again that I wouldn’t stop talking about in Friday’s Salted Caramel Apple Cheesecake post.  I told you that I was wanted to use that mandoline for every recipe for the rest of my life, and I wasn’t kidding.  However, you can still make this without a mandoline if you thinly cut the brussels sprouts with a knife, it’s just more time-consuming. 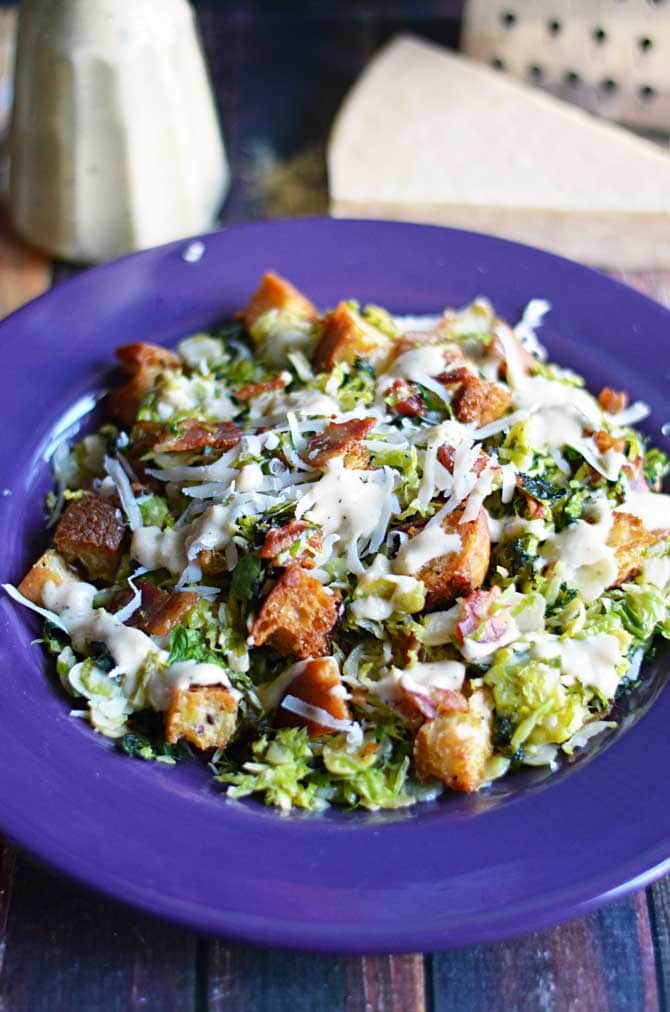 For the Caesar dressing: