Hot German Potato Salad is the ultimate mayo-free side dish for any time of year. This recipe features a warm bacon vinaigrette, which coats the potatoes and soaks in as it sits for extra flavor. With bacon, onions, broth, and vinegar in the mix, there’s no shortage of flavor in this potato salad. Did I mention there’s bacon? There’s lots of bacon. 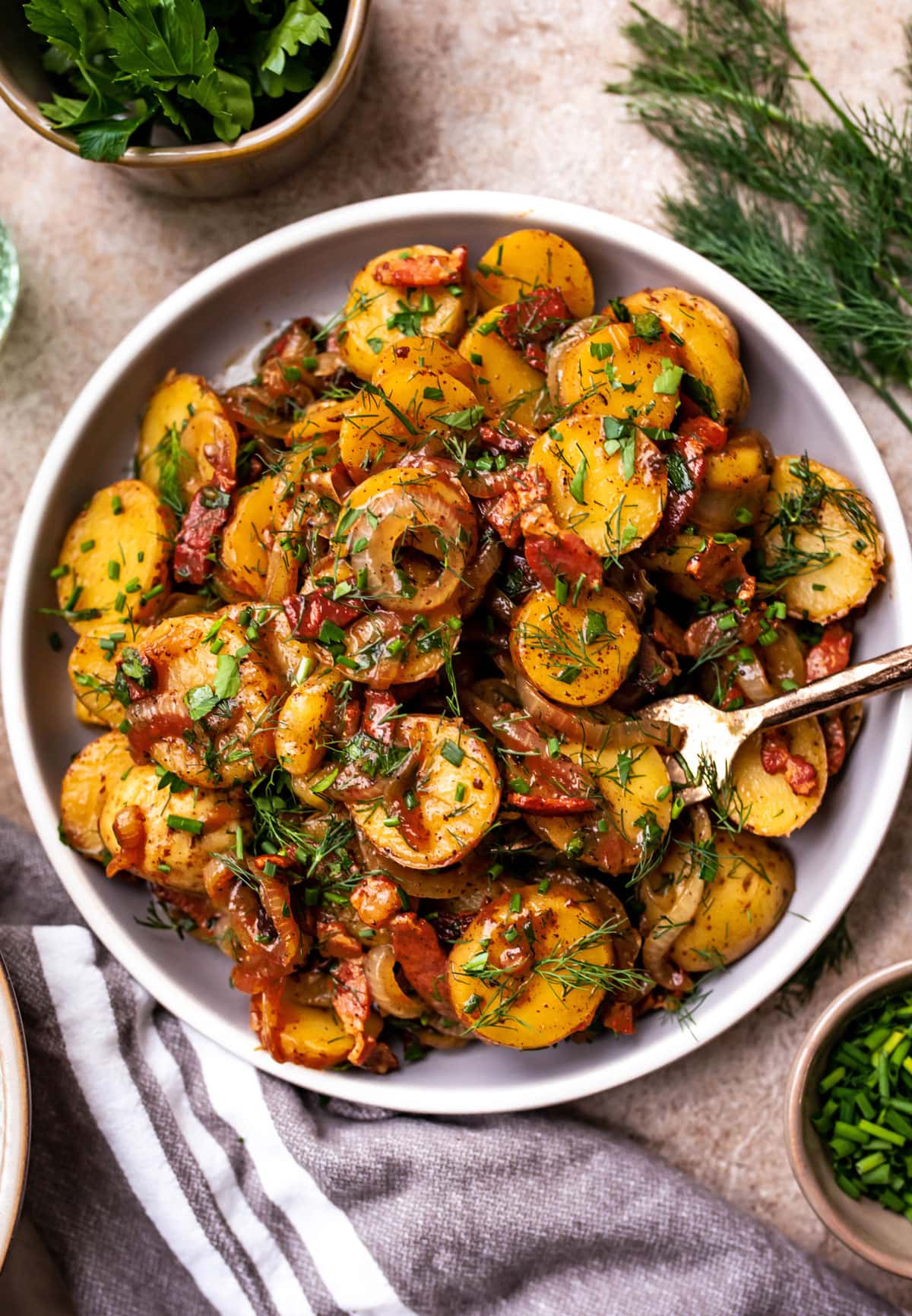 About 7 years ago now –after 10 years of begging — I finally got my Omi to teach me all of her authentic and much-loved German family recipes. I may have promised her internet fame in exchange. I may have exaggerated slightly.

My Omi’s recipe has been up here for all of those 5 years, and it’s been super popular. Not just with everyone who has come here to make it again and again, but with everyone at every cookout I’ve had for the past half-decade, because I always have to make it. And while over the years, there have been some slight tweaks to the recipe (which I have updated here, and which I beg you not to tell my Omi about), the traditional basis stays the same– waxy potatoes, bacon and the drippings, plenty of onions, red wine vinegar and broth for flavor, and a generous sprinkle of herbs. Simple. Delicious. An instant hit.

WHY I LOVE THIS RECIPE

WHAT IS GERMAN POTATO SALAD?

Typically when Americans hear “Potato Salad” the first thing that comes to mind is the mayo-blanketed variety, often with eggs, celery, and onions in the mix.

However, the German variation, which is generally served warm, doesn’t feature mayonnaise at all. Instead, the dressing is a bacon vinaigrette, which is mixed in while still hot so its flavor can soak into the potatoes.

While German Potato Salad does hail from Germany, as the name implies, there are actually several varieties of potato salad that come from different regions in Germany. Some don’t use bacon at all, some require mustard, some will recommend starchier potato varieties.

As my Omi lived in several different regions in Germany, I can’t be entirely sure where she first learned to make German Potato Salad, but it’s likely influenced by Bavarian and Swabian versions of the dish. 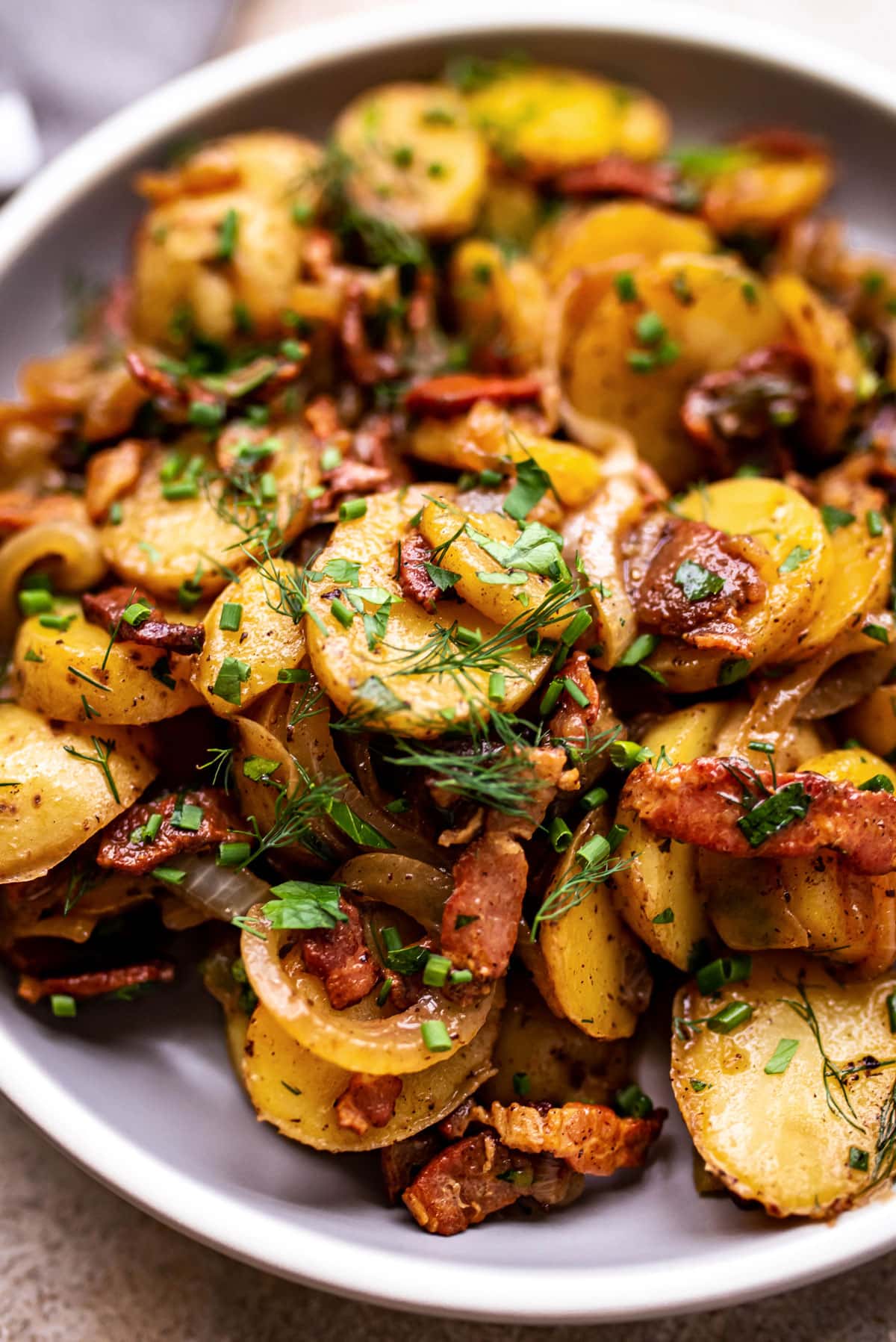 One of the reasons I love making this recipe so often is that it requires such straightforward ingredients but combines into a deeply flavorful dish!

As with any grandmother’s recipes, the tips may be just as important as the chosen ingredients.

First and foremost, you should know that Omi very highly stresses the importance of using Heinz red wine vinegar as it’s got the “perfect acidity.” Personally, I’ve never noticed the difference, but it’s worth stating.

Secondly, she advises that you can break up a small piece of potato in the pan while making the dressing if you’d like the dressing to be thicker, as the starch will help.

Lastly, she insists that the best way to make German Potato Salad is to actually make it the night before, refrigerate it, and take it out of the fridge to bring to room temperature before serving. If you want it hot, heat it up the next day, she says. But the time spent in the fridge “really lets the flavor grow.” 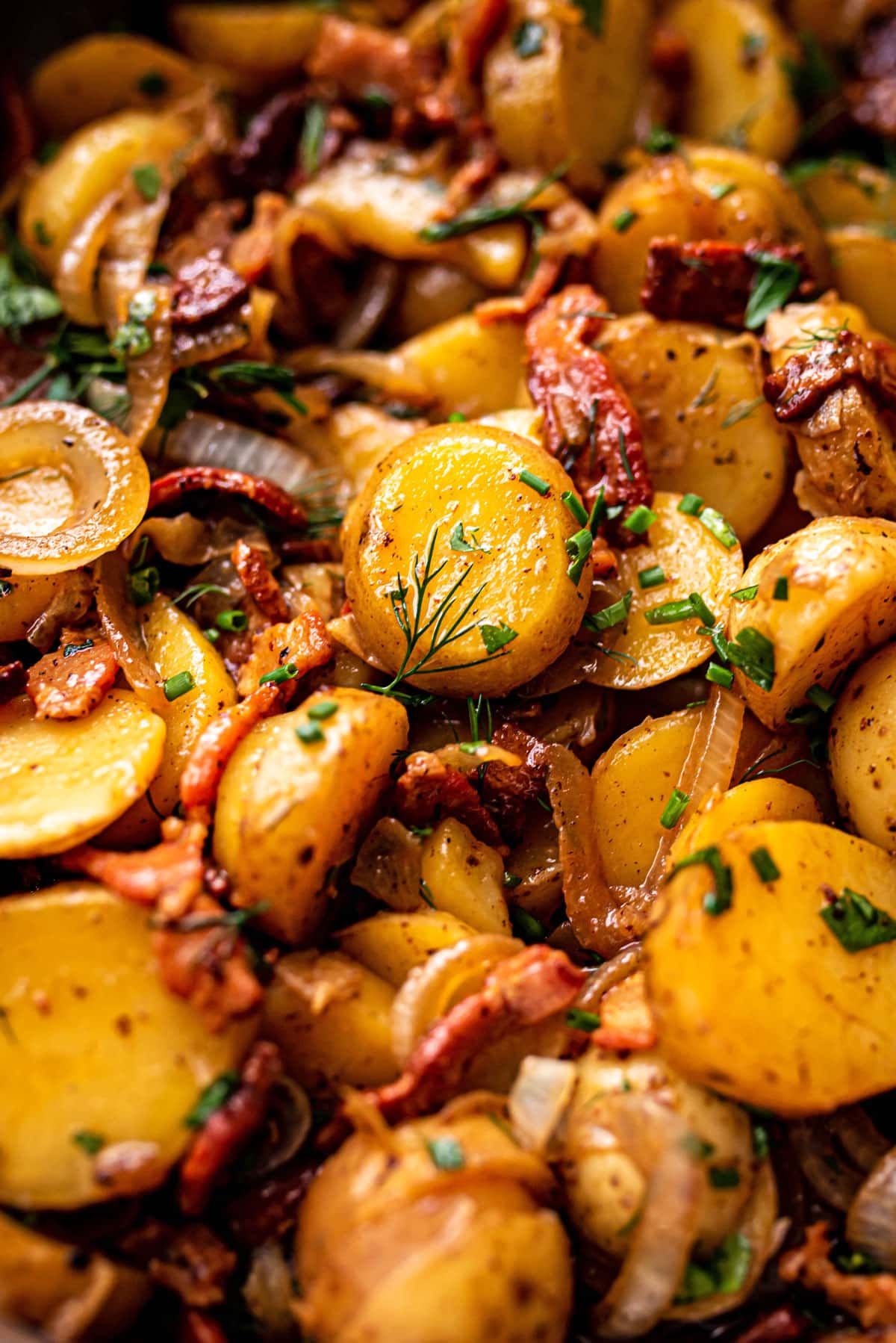 HOW TO PREPARE GERMAN POTATO SALAD

And that’s all it takes!

Those pesky, picky mayonnaise haters (like myself, sorry!) will never annoy you again with their refusal to try your prized potato salad at big summer BBQs if you serve this version up.  Even those who love the mayonnaise-slathered American version usually enjoy the vinegary German Potato Salad and ask for the recipe.  Everybody wins with German Potato Salad, and I guarantee it will disappear faster than you can imagine. 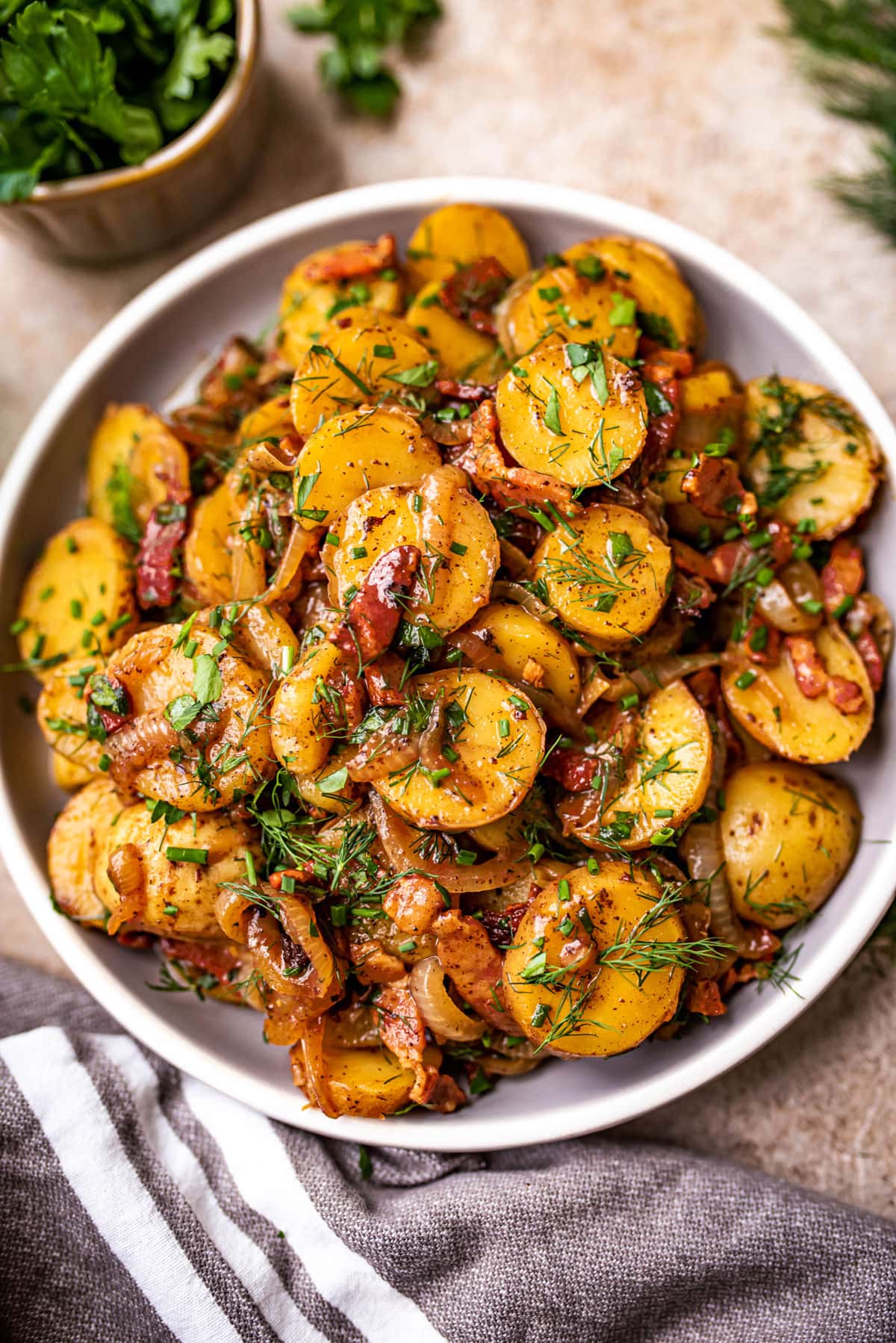