5 Ingredient Crispy Smoked Gouda Cheese Balls. At parties, cheesy appetizers are always a hit. These cheese balls, with their crisp outside, airy inside, and smoky flavor are no exception. They take only 30 minutes to put together, and they’re absolutely addictive. 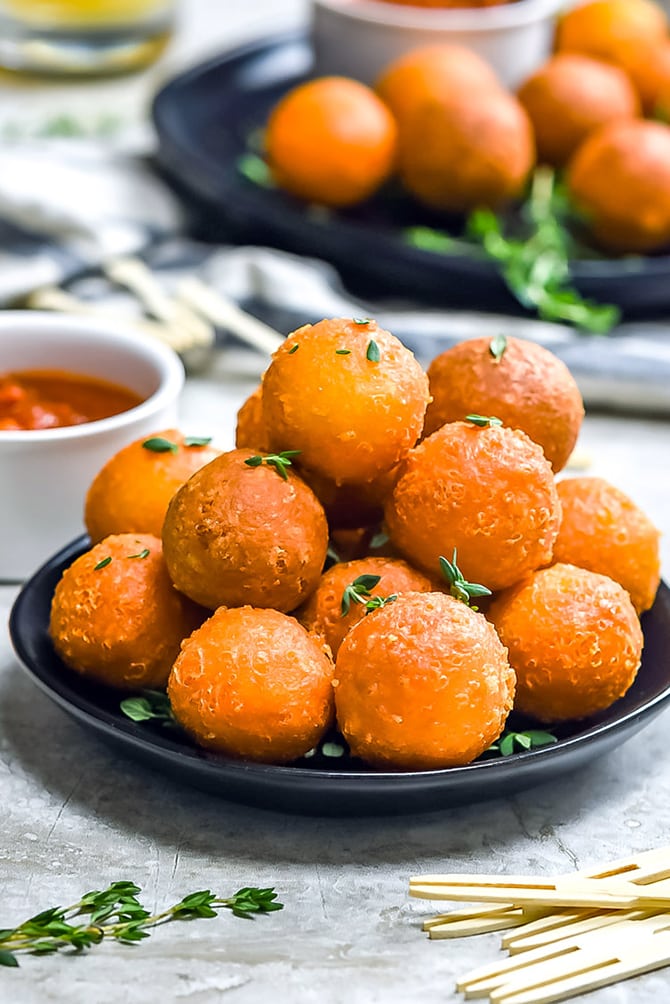 A few months ago, I decided not to host New Year’s Eve this year. My house pretty much has dibs on all of the major holidays in my friends group because I’m just the tiniest bit of a party-hosting-maniac (I know, with a blog name like Host the Toast, who’d have guessed?), but this year I thought I should pass on the duty of party planning and bring in the new year as stress-free as possible.

A few different friends invited us out for NYE, and my biggest decision was going to be whether to go to a 90’s dance party at the shore or a house party near the city. No coordinating with huge groups of guests. No cooking for a crowd. No decorating necessary. I was relieved. 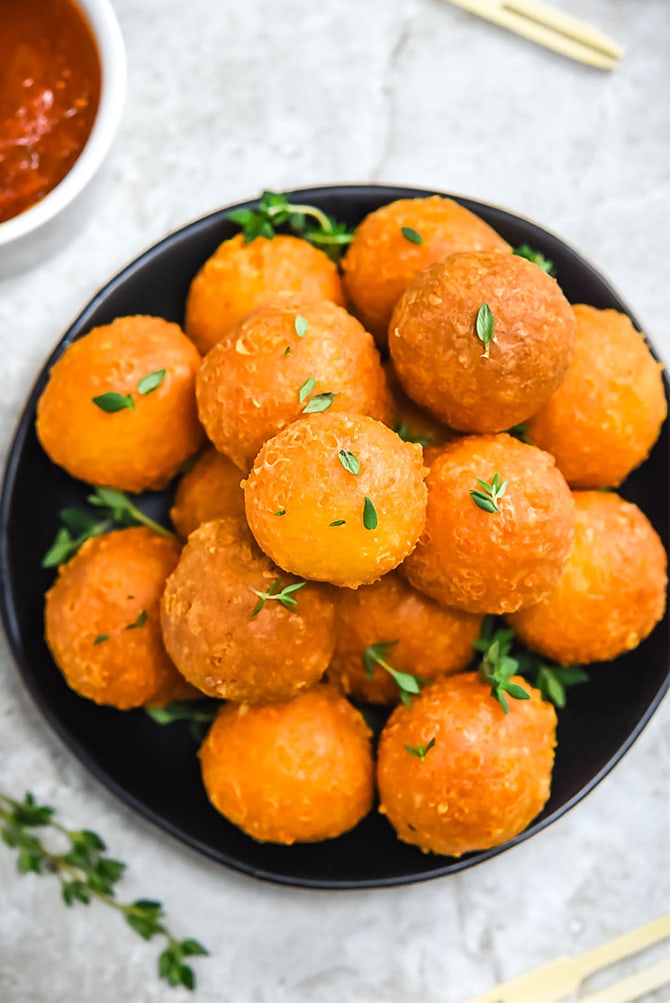 When the afternoon of the 31st rolled around, I realized that I still had to figure out what to wear, get ready, organize transportation, figure out if someone could check in on Roux (or plan on coming home before she’d been left alone too long), and yep, I still had to decide between that dance party or house party. So as I stared at the seven dresses that I’d plucked from my closest and thrown onto the bed, I finally made a decision… to put back on pajamas. I was going to stay home, with a bunch of cheese and champagne and James and Roux to ring in the New Year. Best decision ever.

BUT that’s not fully how it went down. Because almost all of our friends who were still on-the-fence about going out turned to us for last minute plans, and when I told them that I’d be celebrating in pajamas and a pile of chips and dips, they decided to join us. So that’s the story of how I wound up hosting NYE anyway, but in pajamas with a messy house and bunch of last-minute, thrown together foods.

If you’re wondering when I’m going to stop blabbering on and get to the point, don’t worry, we’ve arrived. I decided to try making cheese balls for my last minute New Years Eve– these 5 Ingredient Crispy Smoked Gouda Cheese Balls, to be exact– and not only did they only require ingredients that I already had on hand, and not only did they take less than 30 minutes to make, and not only did they cause me absolutely NO stress at all, but they also were freaking delicious. I’ll host 100 more parties this year just as an excuse to make them again. 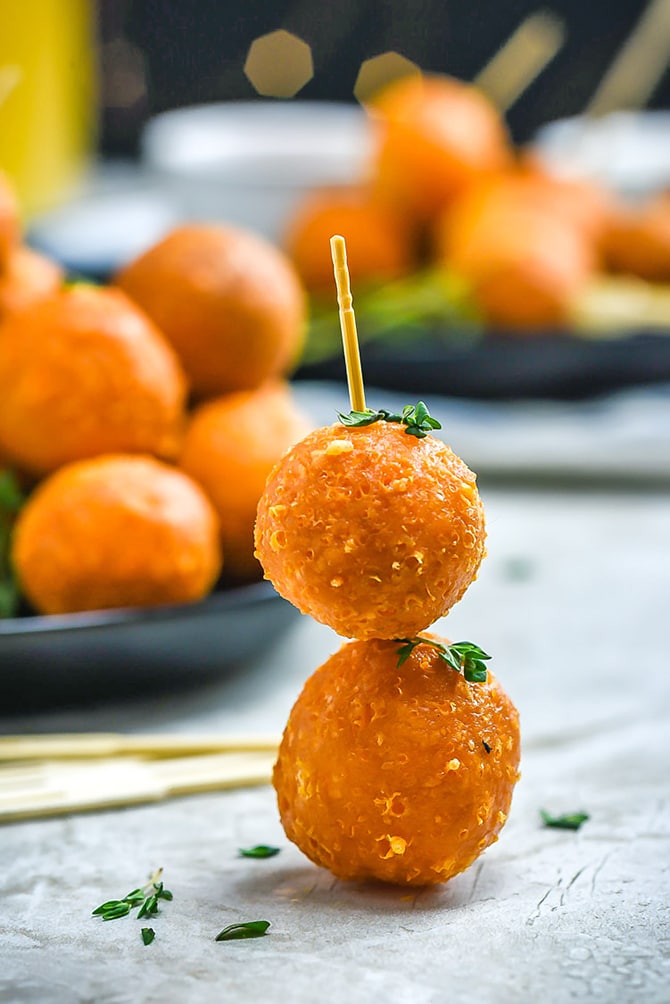 WHAT ARE THE CRISPY SMOKED GOUDA CHEESE BALLS?

These cheese balls aren’t the sorts that were big in the 70s– you know the sort I’m talking about, where you combine cold or room temperature ingredients like cream cheese, cheddar, and bacon, and then roll the mixture into crushed nuts before setting out to serve. Nope, these cheese balls are cooked (or more specifically, fried), until crisp on the outside, tender and airy on the inside, and with just a few small pockets of gooey melted cheese in between.

From there, you eat them while they’re warm, either on their own or dipped in marinara. And you eat way too many of them. It’s just a fact. 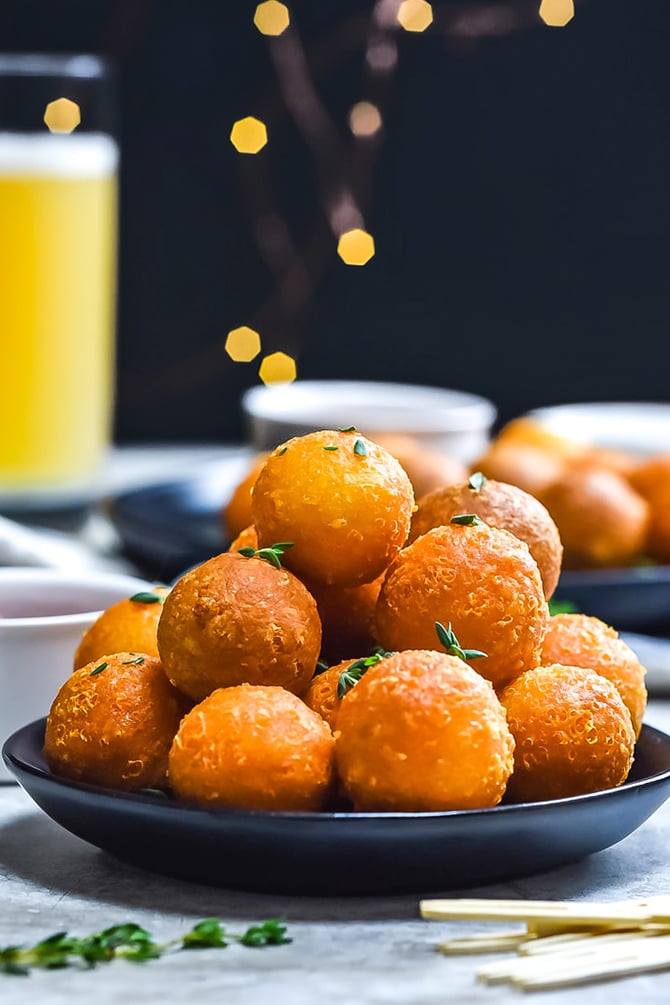 WHAT ARE THE 5 INGREDIENTS?

You only need 5 ingredients to make these, and you’ll likely have a lot, if not all, of them on-hand. They’re:

And, optionally, salt to taste. If you use the salt, it’s six ingredients. Unless you don’t count salt and oil as ingredients, since some people don’t, and then it’s four. I don’t know, I didn’t make the rules. The point is, this recipe has five ingredients. Or six. Or four.

Er, the point is, this recipe has very few ingredients. 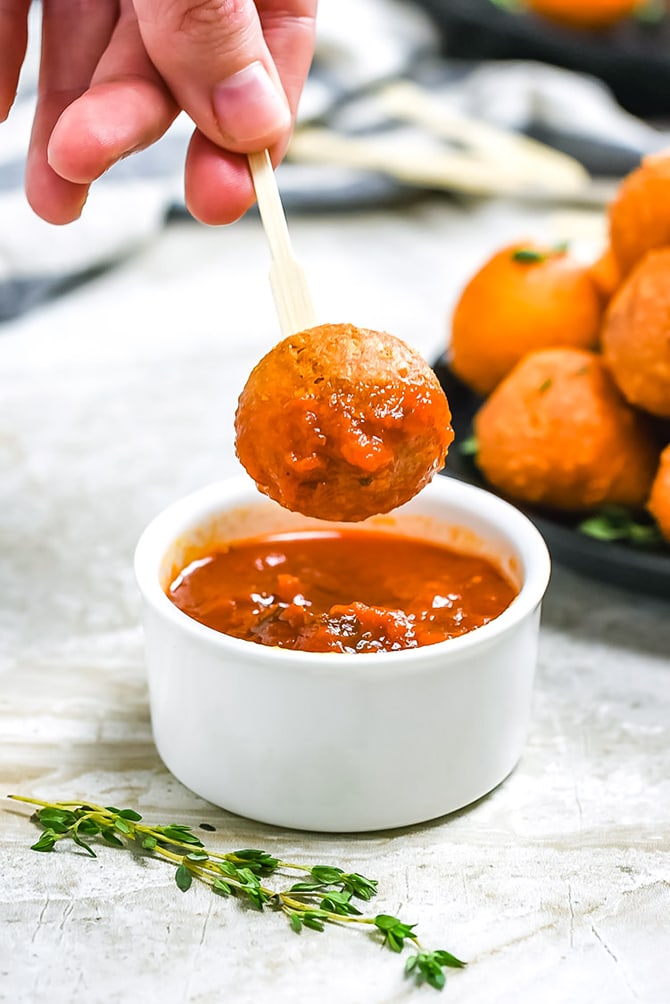 HOW DO YOU MAKE 5 INGREDIENT CRISPY SMOKED GOUDA CHEESE BALLS?

To make the cheese balls, all you have to do is mix together the cheese, baking powder, salt, eggs, and flour until a dough forms. I usually use about a half cup of flour, but sometimes I need more. Don’t worry if you need more or less, just keep adding until you get a dough that’s easy to roll into small balls.

And, yep, you’re right, that is the next step. Roll the dough into balls. I like to make mine about the size of ping pong balls, but you can make them smaller if you’d like. Try not to make them much bigger, though, as they puff up a bit as they cook, and you also don’t want the exterior to get too dark before the inside is cooked through. 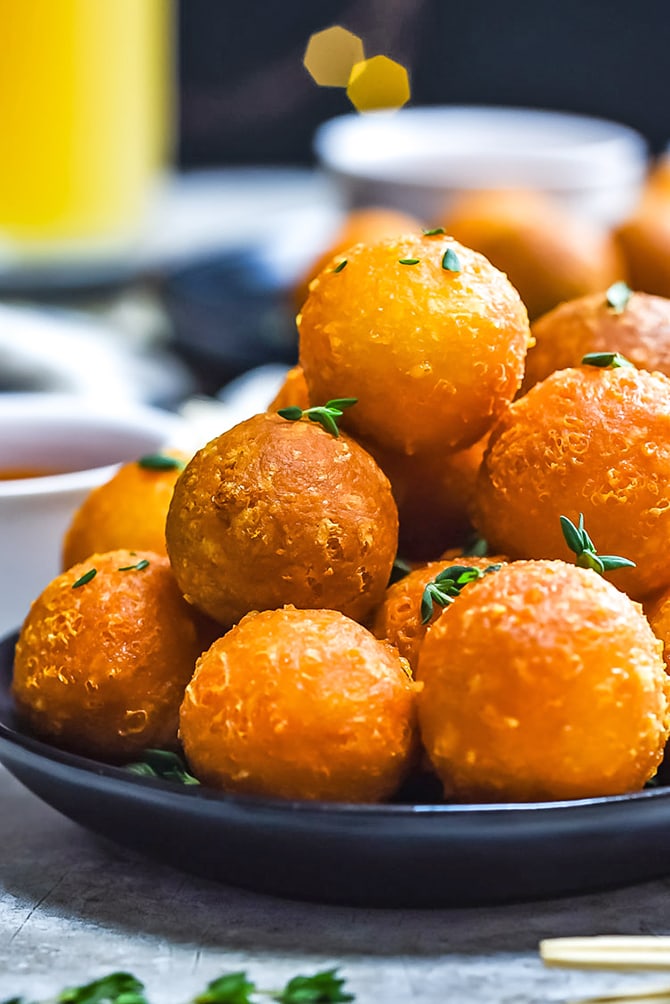 After you’ve rolled them into balls, heat some oil in a heavy-bottomed skillet or pot. You want to use enough oil to almost cover the cheese balls. Then fry them, flipping if necessary, until they’re an orangey gold. Move them to a paper towel lined plate to absorb excess oil but don’t let them cool too much– these are best when served warm! Then all that’s left is to set them out and watch them fly. If your friends are any like mine were on NYE, they won’t last long.