If you want a comforting fall recipe that doesn’t skimp on the spice, this Chipotle Butternut Squash Soup with Chorizo is for you.

This delightfully creamy butternut squash soup gets a huge punch of flavor from spicy, smoky Mexican ingredients. Canned chipotle peppers in adobo and crumbles of Mexican chorizo balance the squash’s natural sweetness, while a swirl of lime-spiked sour cream helps to tame the heat. 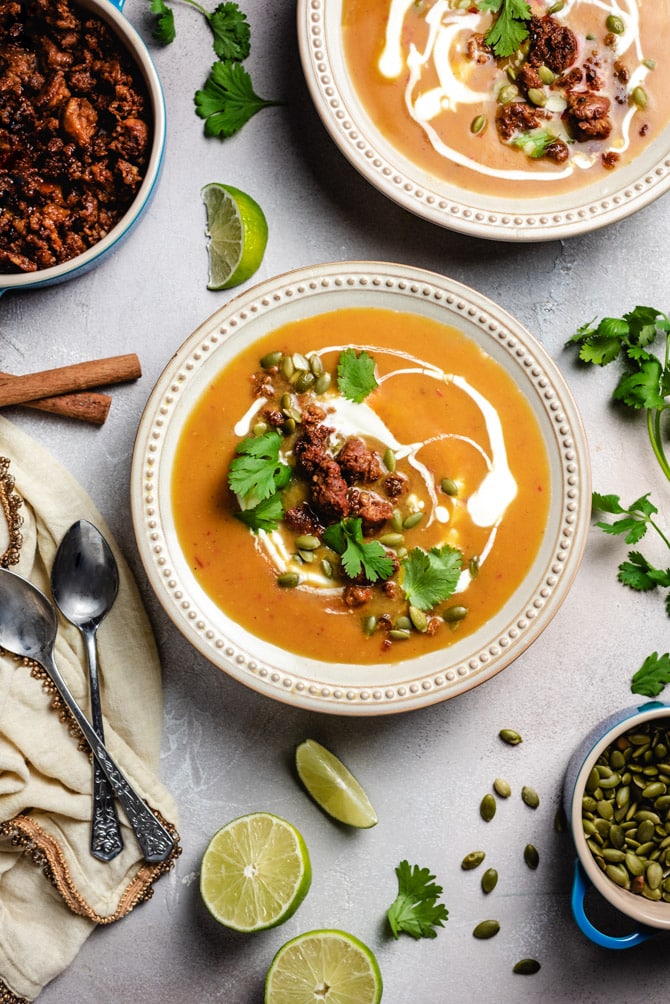 For not-a-big-squash-person (cue James in the background saying, “Of course you’re not a big squash person! You’re not nearly orange enough!”), I sure ate A LOT of butternut squash soup this week. It’s been both lunch and dinner for several days running.

I may literally become a “squash person” if I keep this up.

But there is just something so comforting about a big bowl of velvety smooth, creamy soup on a chilly fall day that makes you throw all squash naysaying and apprehension to the wind, you know? I’m telling you, this soup is like a hug in a bowl. Actually, I’d say it’s more like a delightfully spicy hug. You can interpret that however you’d like. 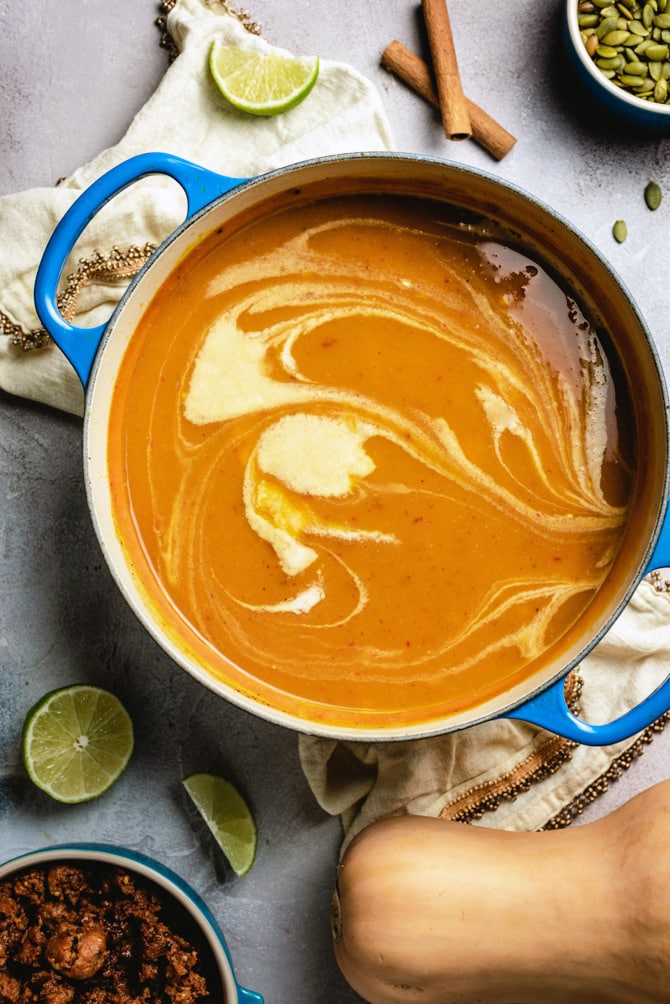 Like I said, I’m not generally huge on squash, but I do love it when combined with interesting (and especially spicier) add-ins, as you might remember from my Thai Coconut Curry Butternut Squash Soup!

In this recipe for Chipotle Butternut Squash Soup, we kick things up in the flavor department with the help of these added ingredients:

All together, they make for a well-balanced, deeply flavorful, ultra-comforting soup. The kind that will have you coming back for a second bowl. And then a third. 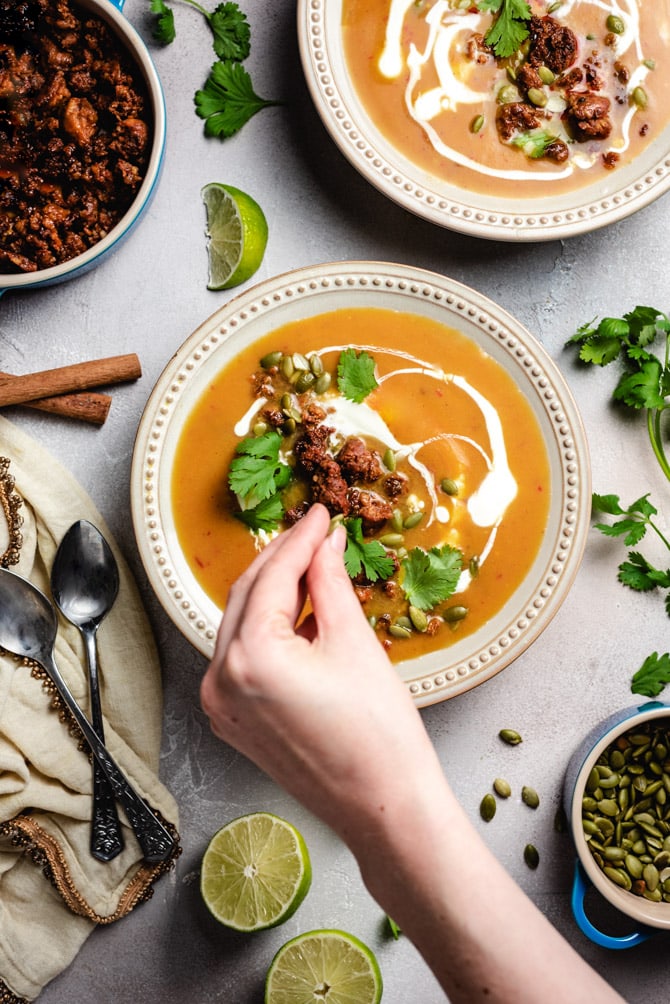 IS THIS BUTTERNUT SQUASH SOUP TOO SPICY FOR ME?

There are a lot of ways you can control the heat level of this recipe but still get great flavor. Even if you are a total spice wimp (no judgment!) you can still make this recipe work for you.

First of all, be aware that chorizo itself is spicy, but not melt-your-face hot. That being said, if you’re extremely spice sensitive, you might want to go with an alternative meat here or leave it out all together. Taco-seasoned ground beef would be a good option, as would chicken sausage.

The rest of the heat in this recipe is coming from the chipotles in adobo. If you want the recipe to be less spicy, ONLY add a bit of sauce from the can (to taste!) instead of the actual chipotles. The sauce still carries a fair amount of heat, but it’s far less fiery.

CAN THIS SOUP BE VEGETARIAN / VEGAN FRIENDLY?

You can adapt this recipe to be vegetarian or vegan friendly, for sure!

Chorizo is obviously a meat product, but soyrizo is a great meatless alternative on the market that would work fantastically here. You also could omit the chorizo all-together and instead add in black beans for protein. Obviously, you’ll also want to switch out the chicken broth for vegetable broth as well, which won’t greatly affect the flavor of the overall recipe.

If you’d like to make the recipe vegan-friendly, you’ll also have to replace the honey. You can use most sweeteners of your liking instead such as agave nectar, date syrup, or plain old granulated sugar. You’ll also have to either use vegan sour cream or swap it out for a different dairy-free alternative such as unsweetened coconut milk. 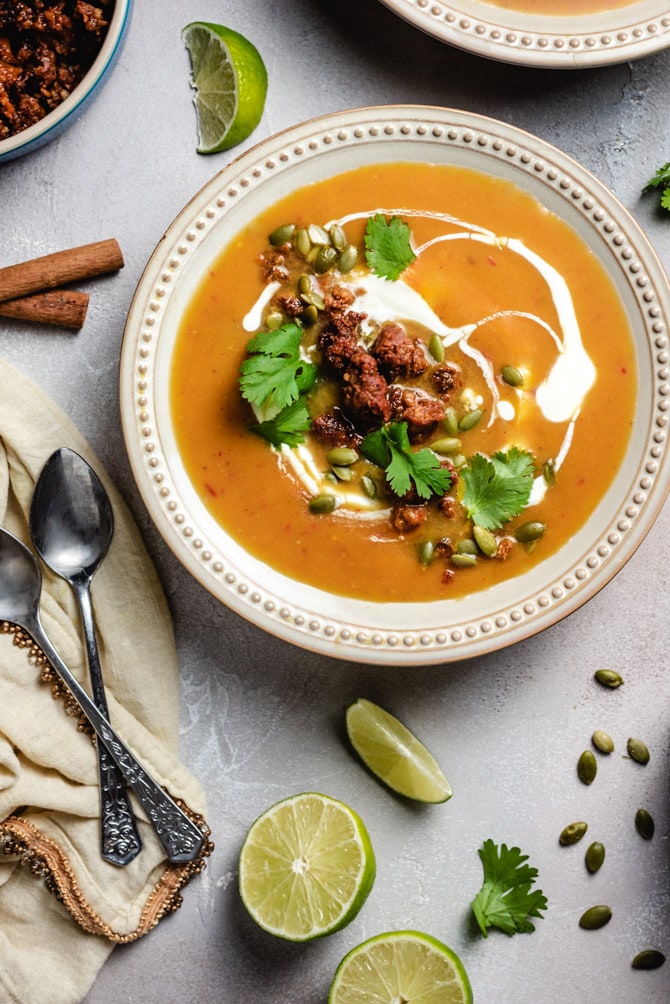 HOW TO MAKE CHIPOTLE BUTTERNUT SQUASH SOUP WITH CHORIZO

There are actually two ways you can make this recipe– on the stove or in the slow cooker. I make mine on the stove in a dutch oven, but I’ll include information below about how to adapt this recipe so you can throw it in the crock pot instead, for anyone who might be interested.

MAKE IT ON THE STOVE:

To make it on the stovetop, simply cook your chorizo first in a large dutch oven or soup pot. You’ll then separate out the chorizo for later, and leave some rendered grease in the pan. That rendered grease will help saute your garlic, onion, and chipotle, and infuse extra chorizo-y flavor throughout your soup.

After sauteeing the aromatic ingredients, you’re going to want to add a bit of broth so you can deglaze the Dutch oven. Once the broth is hot enough, you should be able to use a wooden spoon to scrape up any browned bits that are stuck to the bottom of the pan. Those bits add a ton of flavor to your soup, so be sure not to skip this step!

At this point, you can finally add in your chopped squash, as well as honey, seasonings, and extra broth. Don’t add the full remainder of the 6 cups– you want to leave out a cup or so so you can adjust to your preferred thickness toward the end. Some people like their soups thicker, some a bit looser, so it really is up to you!

The soup should simmer for about 30 minutes before the squash is tender enough to blend. You can blend the soup by transferring it to a blender, but my personal favorite way is to use an immersion blender (or stick blender, as they’re sometimes called). Simply place your immersion blender in the pot, turn it on low to start, and keep going until no chunks remain.

At that point you can adjust the seasonings and thickness as you like, adding more broth, chipotles, and/or salt as needed. Load it up with all of the toppings (plenty of chorizo, sour cream, pepitas and cilantro) and you’re ready to dig in.

MAKE IT IN A SLOW COOKER:

If making this recipe in the slow cooker, you will still want to start off on the stove, but just to quickly cook the chorizo, onions and garlic. These ingredients won’t get the same flavor if they’re cooked in liquid ingredients in the slow cooker. (However, if you have a slow cooker with a saute function like mine does, that’s always a great option to begin with!)

After sauteeing everything, cover and refrigerate the chorizo until later. Add the onions and garlic to the slow cooker along with the chipotle pepper, cumin, honey, broth, butternut squash, salt, and pepper. Cover and cook until the squash is very tender– it should take about 8 hours on low or 4 hours on high. Then use an immersion blender to blend the Chipotle Butternut Squash Soup until smooth.

At this point, stir in the chorizo and continue to cook (covered) until the chorizo is warmed through, about 20 minutes or so. Then transfer to bowls and top as you’d like! 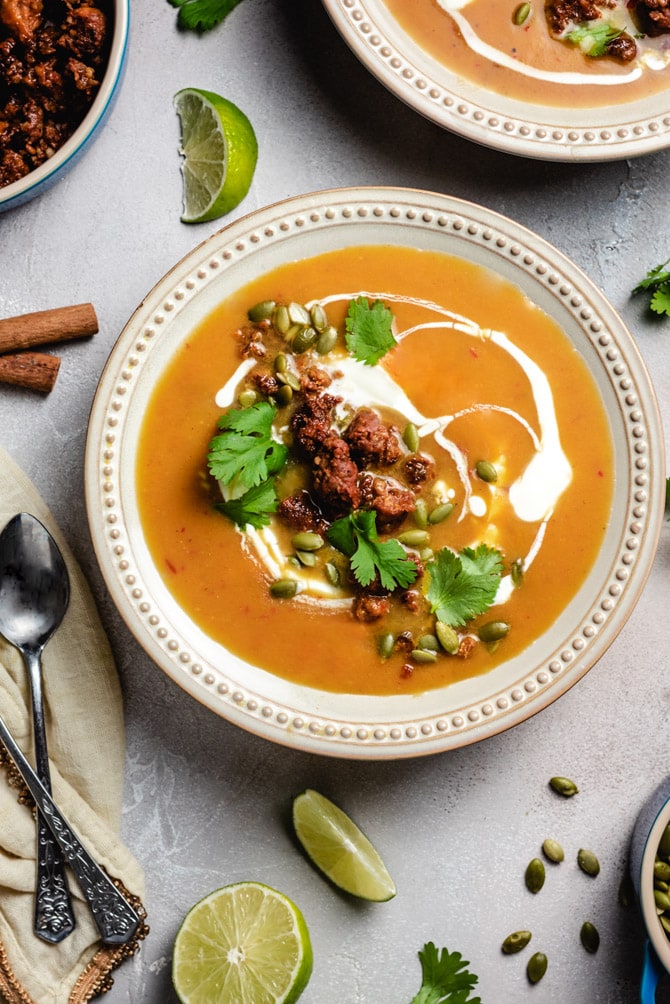