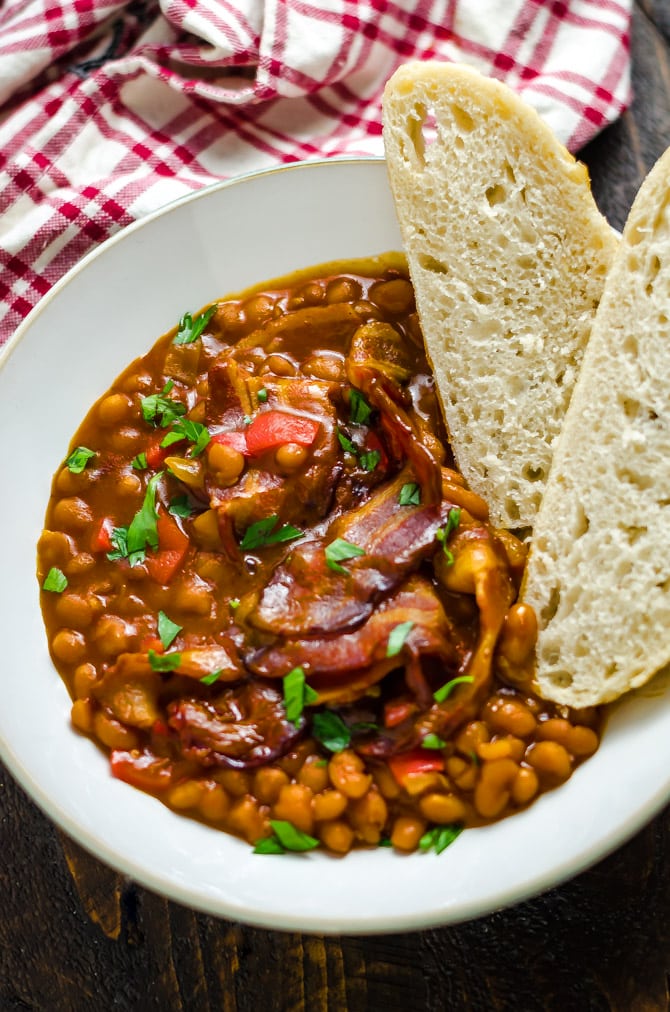 I try not to throw the word “ultimate” around here too much because there are thousands of classic recipes on the web, but sometimes I sink my fork into something that’s too good for modesty… and you guys, after my first bite of these beans, I knew it was one of those times. I’ve made baked beans a billion times before. I’ve eaten them in restaurants and at barbecues and at my grandma’s house. I’ve recreated recipes that swore that they were the hands-down best. But nothing ever has come close to these beans right here– and did I mention that on top of being the best, these BBQ Bacon Baked Beans are easy to make, too? 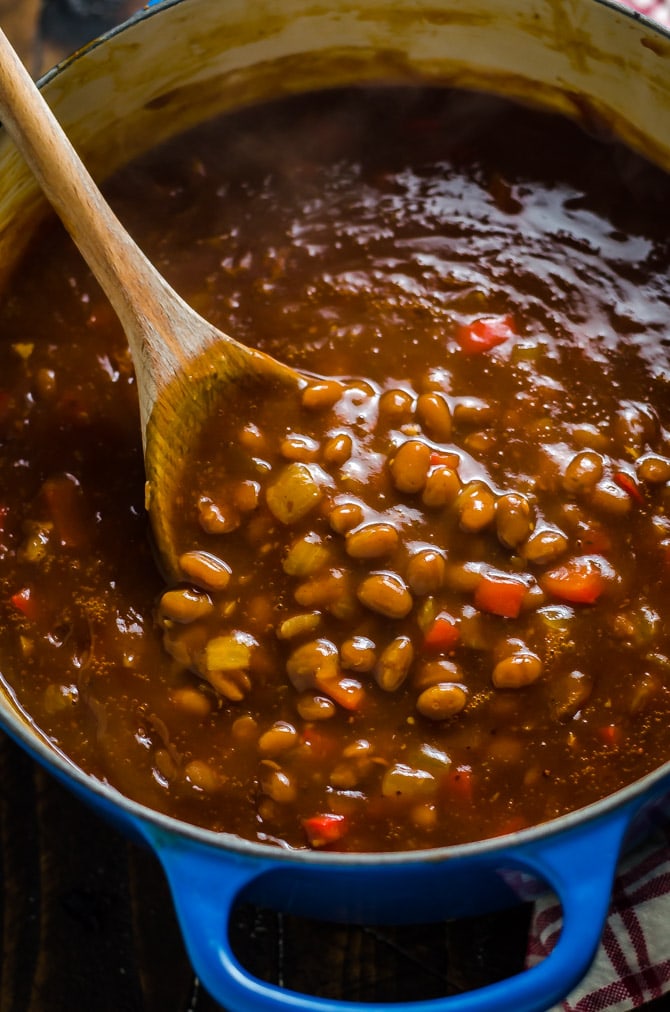 As I said before, I’ve made many a batch of baked beans over the years, which mean I’ve had plenty of opportunities to tweak and re-test my recipe. The over-arching theme of what I’ve learned: pack in as much flavor as possible without costing way too much money or time. That means no soaking beans for 12 hours when, honestly, the good ol’ canned pork and beans are so much simpler, and surprisingly, taste just as good. Maybe even better thanks to all that salted pork they’ve been sitting with! Oh, and instead of buying all of the individual ingredients, I doctor up some store-bought barbecue sauce to keep things simple. 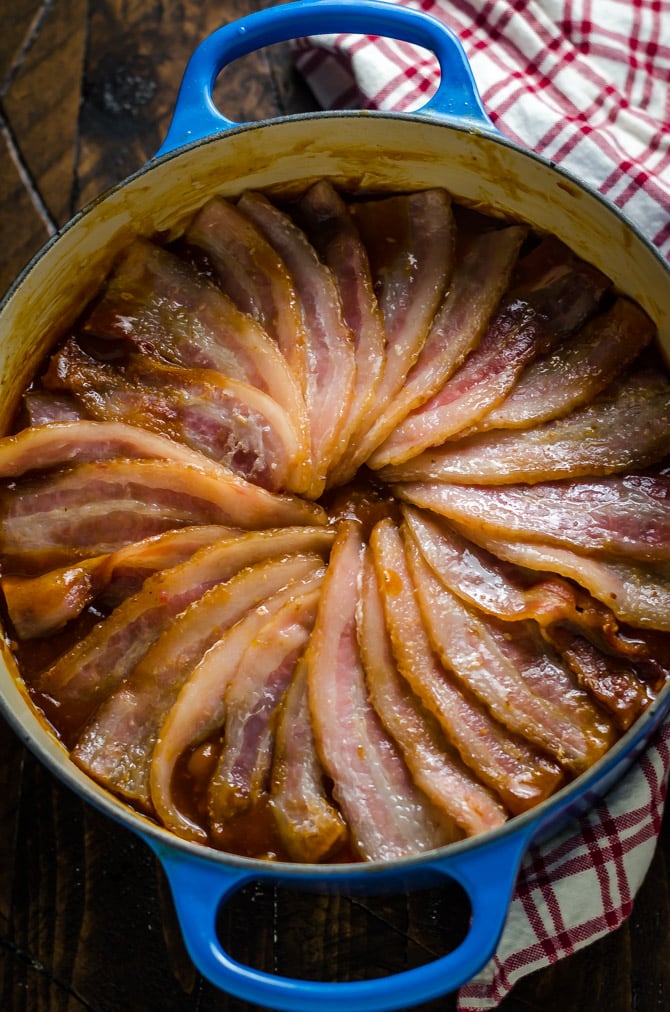 But even though we’re cutting corners in the bean-soaking and BBQ-sauce-making departments, we don’t cut any corners on the pork. Sure, there’s already a good amount in the beans, but if we’re making the ultimate Easy BBQ Bacon Baked Beans we don’t settle for “a good amount”. We go all out with fresh bacon. Lots and lots of bacon. A literal roof of bacon over the beans.

The key to perfecting this bacon is cooking it just until it renders out the fat but doesn’t crisp up. I then set the bacon aside for later, and saute some onion, garlic, and red bell pepper in the bacon fat. Gotta get all that flavor in, you know? After adding in the beans, BBQ sauce, and a few tasty seasonings to kick things up a notch, I put layer that lightly-cooked bacon back on top to finish crisping in the oven and release the rest of bacon flavor down into the beans as they cook. Bonus? The sweet BBQ sauce bubbles up a bit and then thickens to glaze the bacon. 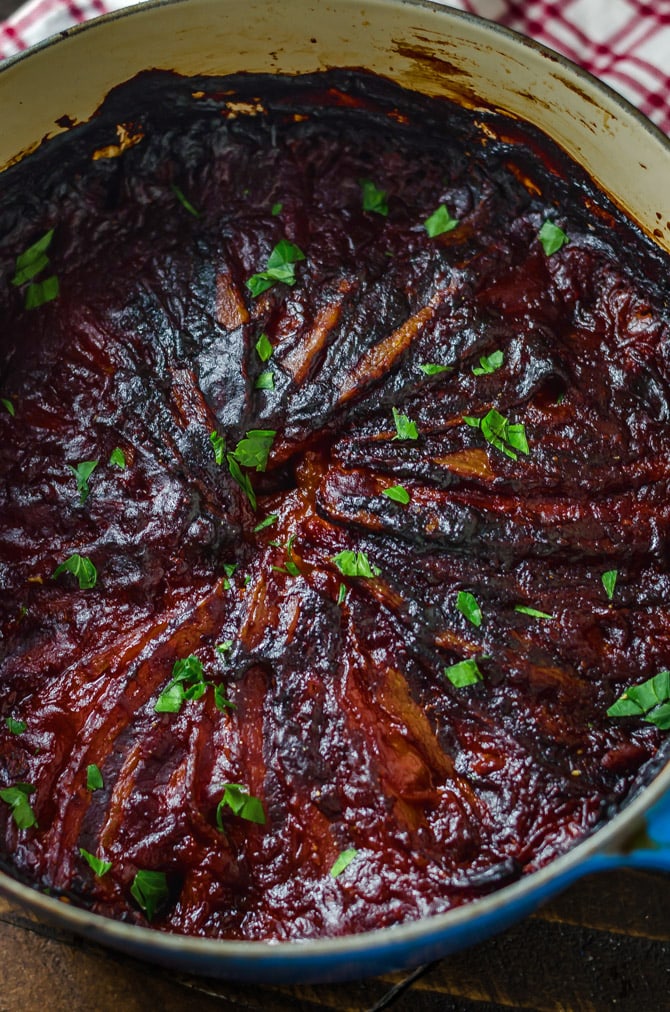 And beneath that glazed bacon top lies smoky, sweet and savory beans that are just as tender as they are irresistible. I brought these to a friend’s Graduation celebration last weekend and had people introducing themselves to me all day just to tell me that they loved the beans and heard that I made them. Score!

By the way, these beans are awesome for a barbecue (especially if you have some sourdough bread on the side to soak up any extra sauce), but if by some luck you wind up with leftovers, enjoy them with eggs and toast the next day. Grade A breakfast material, you guys. Heck, I might even say the ultimate breakfast material. 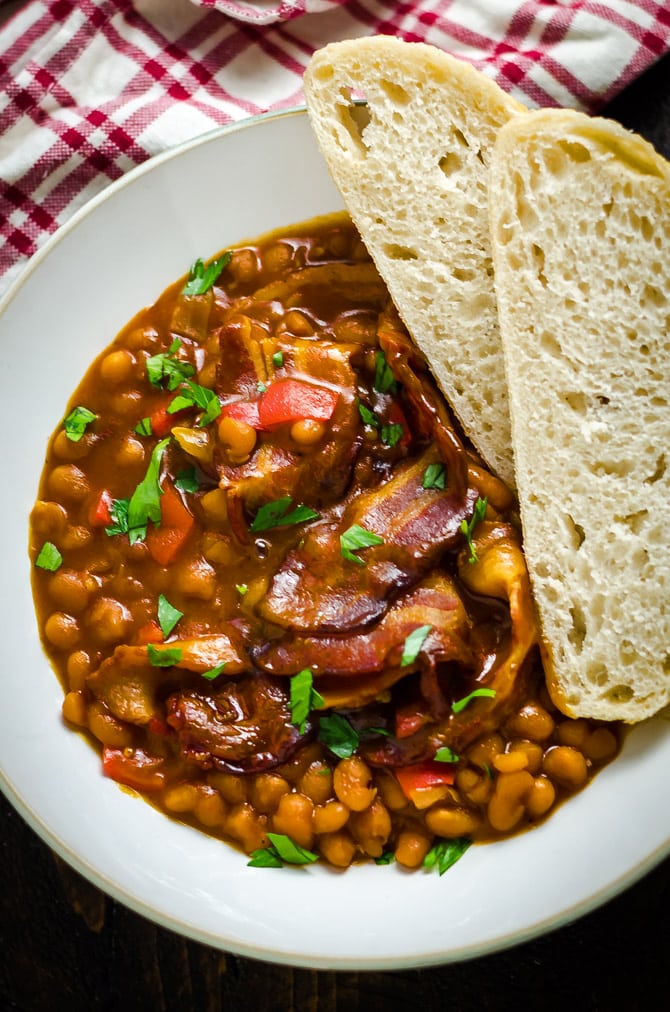 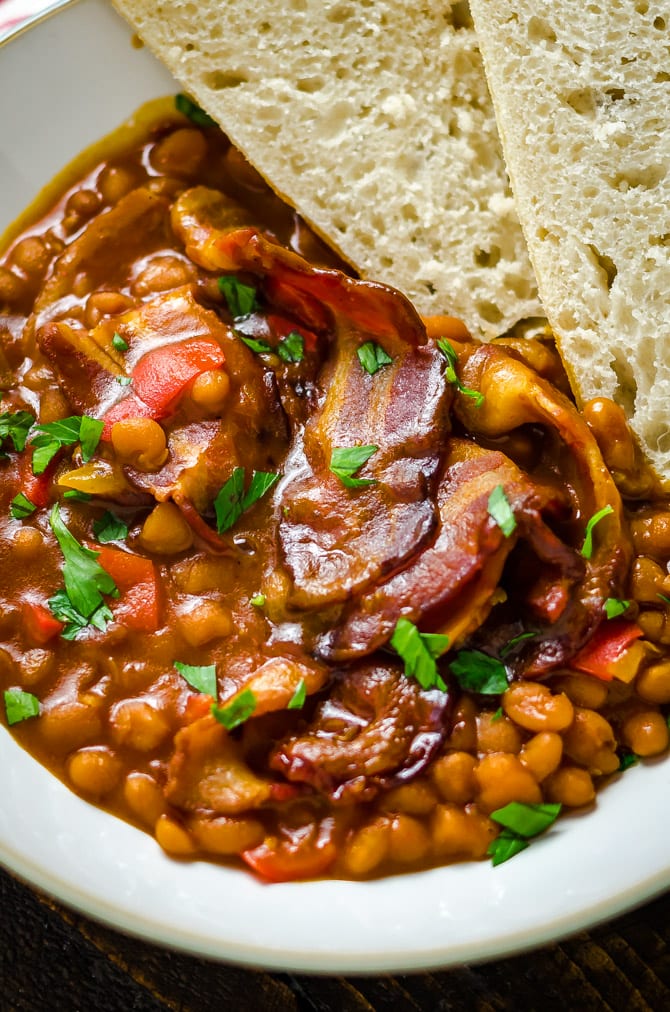