Rich and hearty Guinness Beef Stew is a classic that you’ll find at pubs and family dinner tables all across Ireland. This version features ultra-tender meat, deep flavors, and Cheddar Herb Dumplings that will make you swoon. It’s the ultimate comfort food. 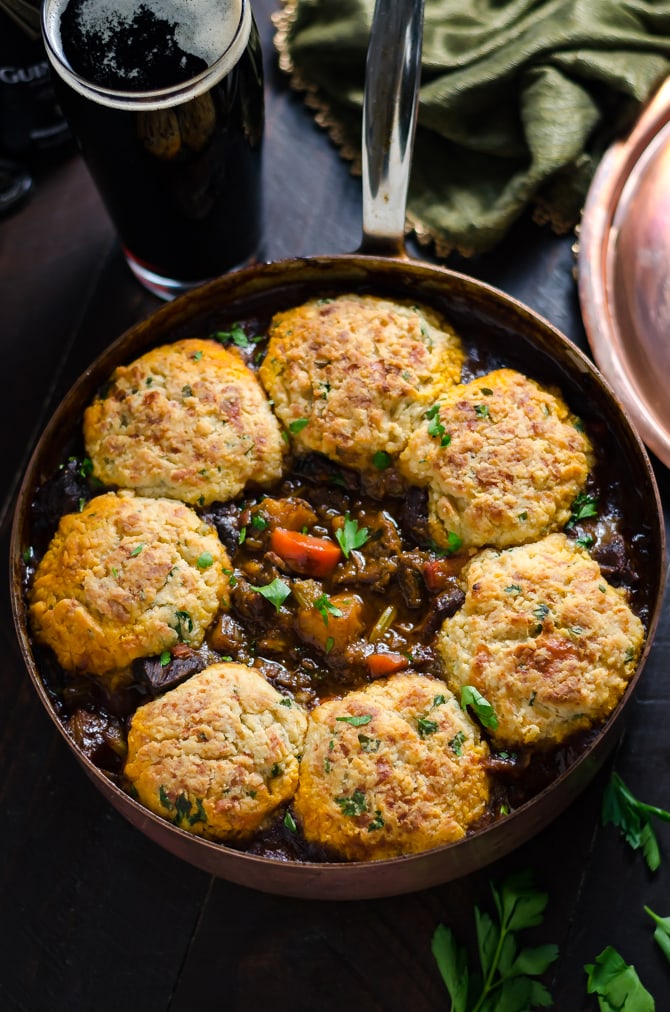 It’s been cruelly cold and frosty for the past couple of days up here, which means I had a choice to make. With a forecasted foot of snow on the way, I could either prepare myself to spend a couple of hours struggling to make a dent with my super-sad shoveling skills, or I could cook up a post-snowpocolypse dinner for the guys and try to subtly avoid going out in the cold. Is it even a slight mystery as to what I decided to do? 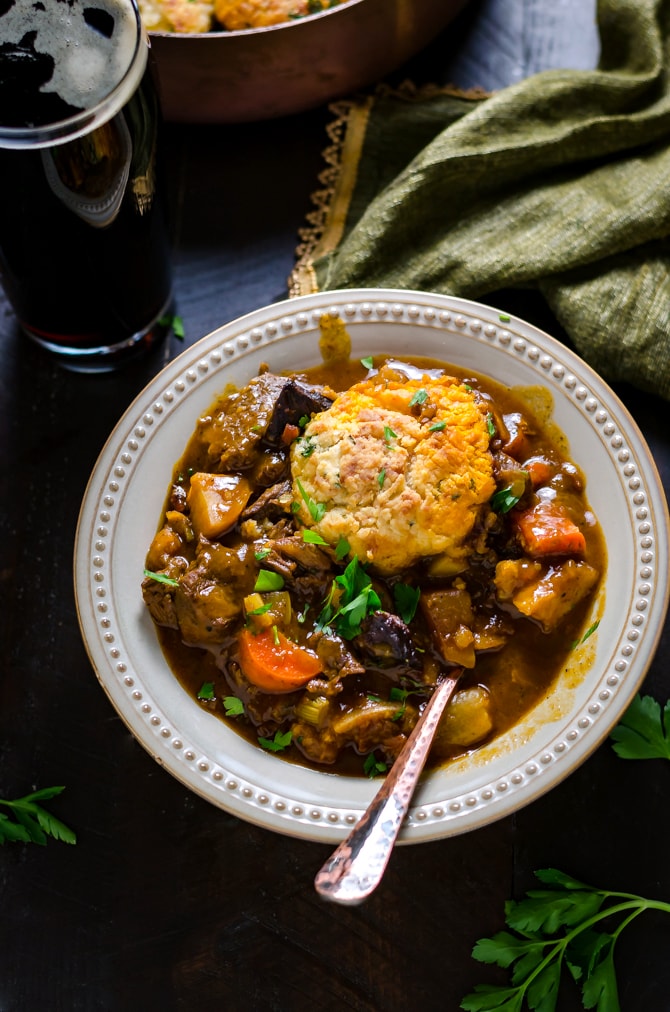 Since I first published this recipe in 2014, it’s grown to be pretty popular– both on the internet and in my home.

I’ve made this stew at least a dozen times to get James and I through the winter’s chill, and always have enjoyed a bottle or two of the leftover Guinness to reward myself for a job well done. Because at the risk of coming off a bit conceited here, I’ve gotta say that I’m always proud of myself when I make Guinness Beef Stew with Cheddar Herb Dumplings.

There’s something so gratifying about making a dish that’s filled with deeply flavorful vegetables, unbelievably tender meat, and an incredibly rich gravy.  And when you throw some cheesy dumplings on top, it just gets that much better.

Not to mention it got me out of having to shovel, so that’s an accomplishment in its own right. The guys didn’t seem to mind at all when there was a big bowl of warm beef stew waiting for them when they came back inside.

But enough about me. Let’s get down to business. 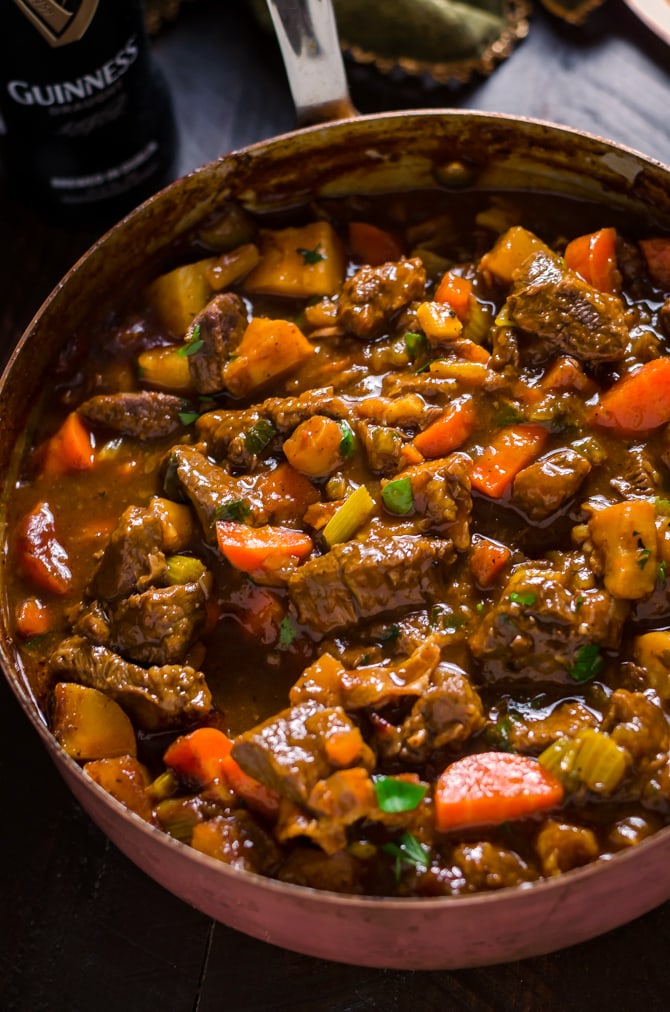 WHAT’S IN THE STEW?

LET’S START WITH THE MEAT.

It’s not uncommon for stews to feature lamb, especially Irish stews. However, this one features beef. Beef tends to be more accessible for feeding a family as it’s less gamy, but you can substitute lamb if you’d prefer.

As far as what cut of beef to use, I always reach for the boneless beef chuck, or chuck roast, as it’s also often labelled. There are a two main reasons for this.

And we can’t forget the bacon. Yes, there’s also bacon! Why bother adding bacon to this recipe? Well, it’s optional, but we already talked about the beef chuck’s connective tissue breaks down and that gelatin keeps the meat moist right?

The thing about that– the good thing about that, really– is that it doesn’t release a whole ton of fat into the stew. And while we don’t want our stew to be swimming in grease, we do want our vegetables to have a great meaty flavor.

That being said, you can opt to leave the bacon out and cook in oil or butter if you’d prefer. 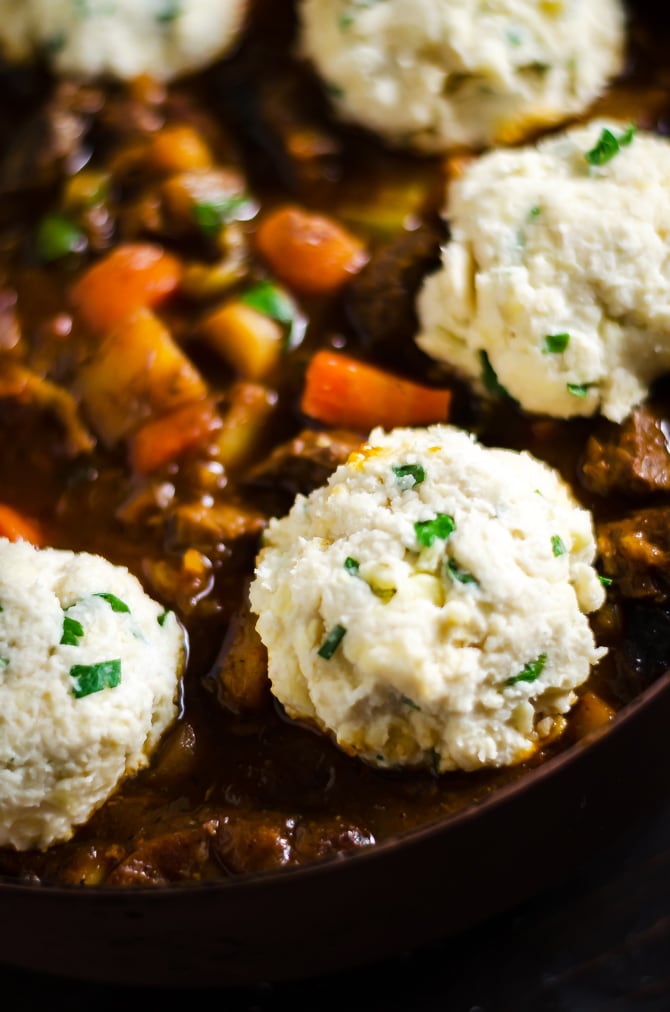 HOW ABOUT THE VEGGIES AND AROMATICS?

When it comes to produce, you can get creative, but I try to stick to traditional ingredients. As I mentioned above, I include onions, carrots, celery and garlic, to start.

Onions, carrots, and celery (together known as a mirepoix) are often included in stews, soups, and stocks because they create an aromatic flavor base. Garlic is another aromatic ingredient that will deepen the final flavor of the stew.

Another ingredient I sometimes add for extra flavor is mushrooms– but they are completely optional.Mushrooms add extra meaty, earthy, savory flavors that make them great for stews, but if you’re not a fan, this stew won’t suffer without them. In fact, I only include them when cooking for certain people– my mom and brother love them in this stew, for example, while James and housemate Mike aren’t fans of mushrooms so I leave them out.

I also add extra root vegetables for substance, such as potatoes, parsnips, and turnips. I might not use all three, but I do use a lot– they’re great for adding texture and those starchy carbohydrates that balance out all of the meat. 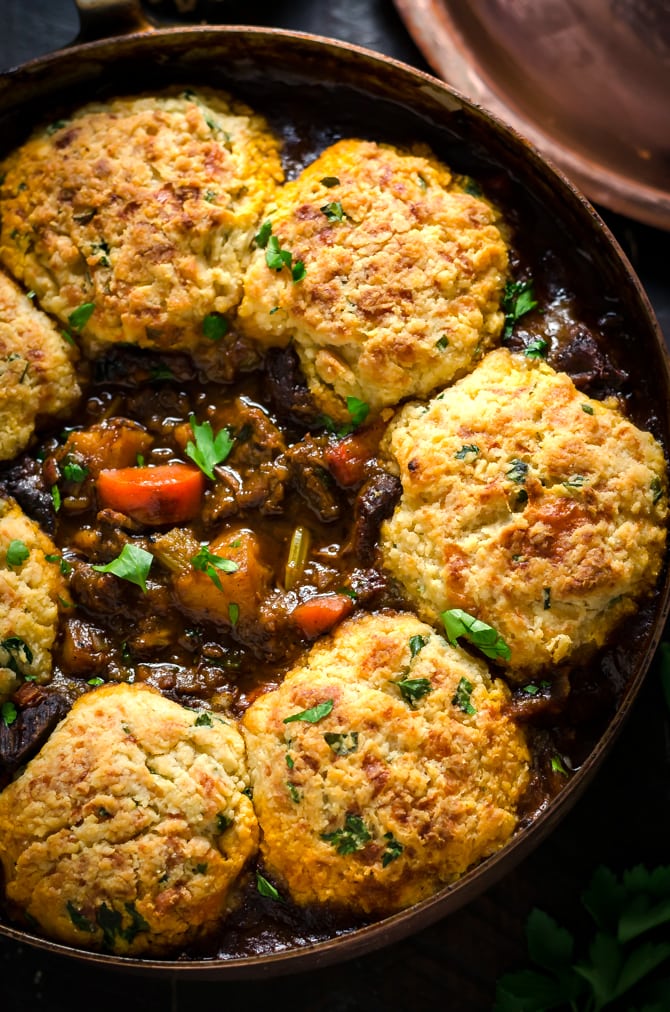 While soups have broth, a good stew has more of a sauce or gravy– it’s thick, it’s comforting, and it’s rich. And man, is it delicious.

For this one, you’ll need the following ingredients: 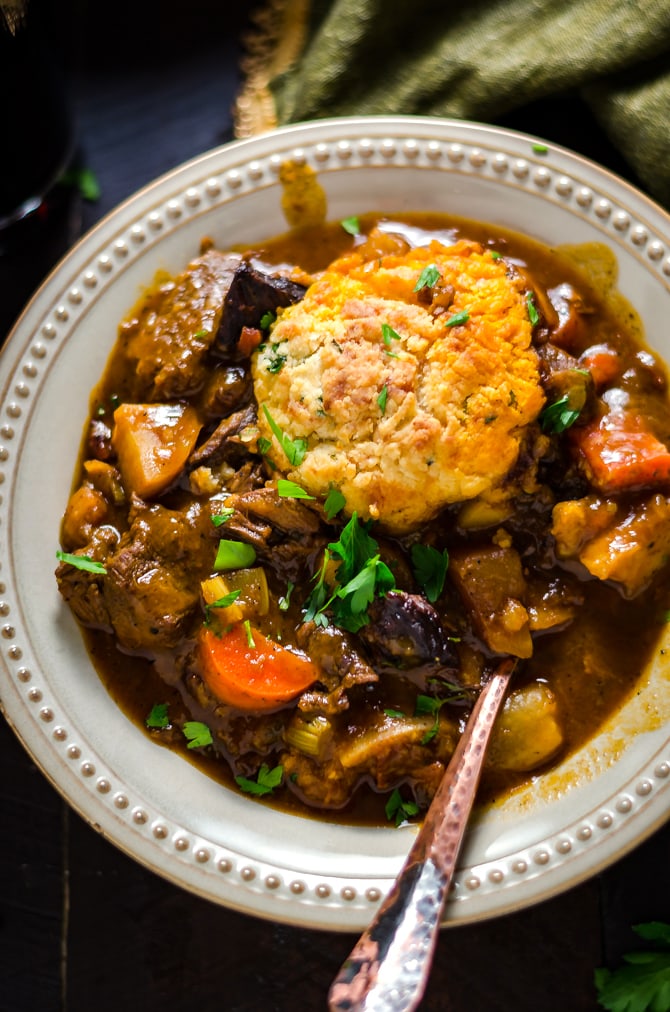 HOW ABOUT THOSE DUMPLINGS?

Ah, the dumplings. I’m almost tempted to call them my favorite part, but let’s be serious, there’s that stew to consider.

The dumplings come together in a flash. Mix together the following ingredients:

And dollop them on top of the stew before transferring to the oven to bake.

Once they’re browned and cooked through, you’re good to dig in.

HOW TO MAKE IT — THE GUINNESS BEEF STEW VIDEO

For the Cheddar Herb Dumplings: