This easy recipe produces a moist, fluffy, and flavorful pumpkin bread with ribbons of cinnamon sugar inside and a crisp, craggly cinnamon crust. 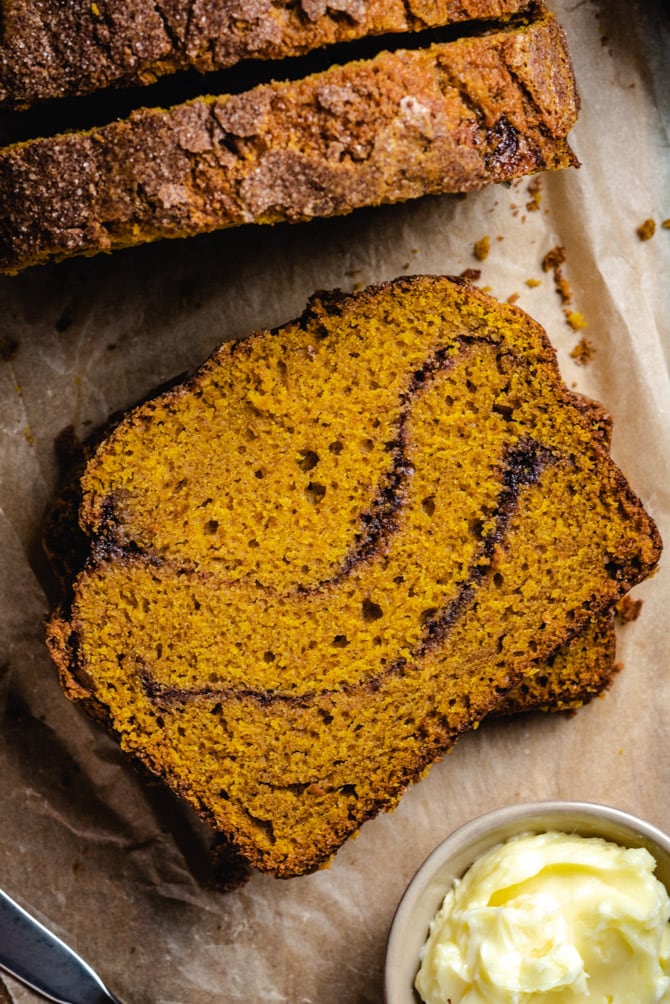 Oh baby, it’s finally baking season! I decided to welcome it the only way I know how: with 8 loaves of pumpkin bread.

I know, I know. I don’t need to spend the intro of nearly every post here detailing for you the level of obsession and… alright, let’s be honest– absurdity –that goes into my testing and creating of recipes, but I can’t help but lay out the facts. I’ve been diligent in my pursuit of the best pumpkin bread recipe. I’ve been patient. I’ve been clearing out my grocery store’s stock of canned pumpkin.

And what I discovered in the end was a tender-crumbed, perfectly-spiced, moist pumpkin bread that’s better than anything I’ve ever gotten from a cafe. Did I mention that it also has swirls of cinnamon-sugar inside and a snickerdoodle-style crust on top, as if to have discovered your deepest Fall-flavored fantasies? Because it does. And it’s even better than it sounds.

HOW TO MAKE MOIST PUMPKIN BREAD

Yes, I said it. The m-word that everyone loves to hate. It may not be the sexiest word to ever exist, but when it comes to pumpkin bread, “moist” is exactly what you want.

Here are the secrets I discovered (through trial-and-error) to getting perfectly moist pumpkin bread: 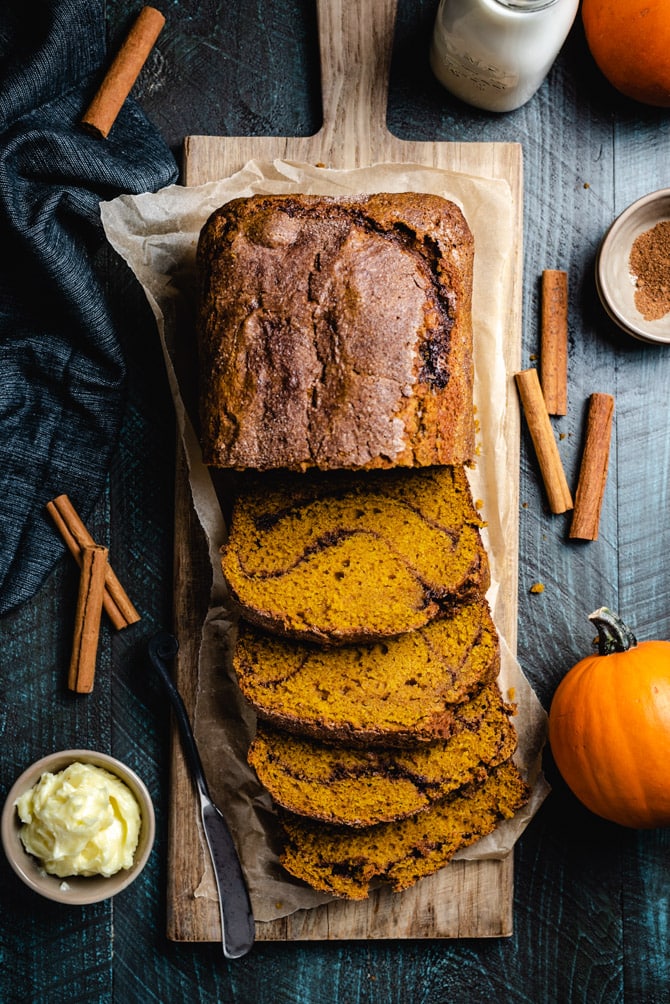 IT’S ALL ABOUT THAT CINNAMON SWIRL

A moist pumpkin bread is only half the excitement here. There’s also the swirls of cinnamon sugar inside (and the light coating on top) that really make your mouth water.

There’s no secret technique to getting it right. All you have to do is mix cinnamon and sugar together, then sprinkle it over the batter in layers before baking. You don’t have to swirl it. The way the batter rises as the pumpkin bread bakes will actually result in the wavy sort of design you see in the pictures here!

The only note I have to make is that you should definitely be sure to sprinkle most of your cinnamon-sugar on the inside layers of the pumpkin bread, not on top. When you put too much on top, it forms a sort of sheet of cinnamon and sugar that will make your bread look kind of funky (and it will be difficult to cut into). So in short, go conservative on the top and go wild between the inside layers! 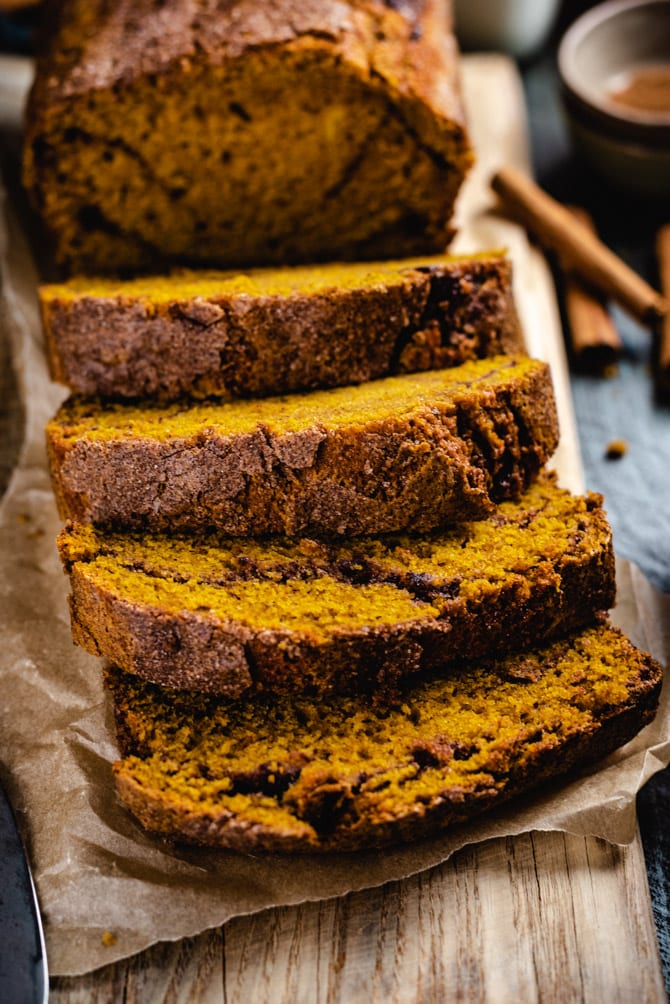 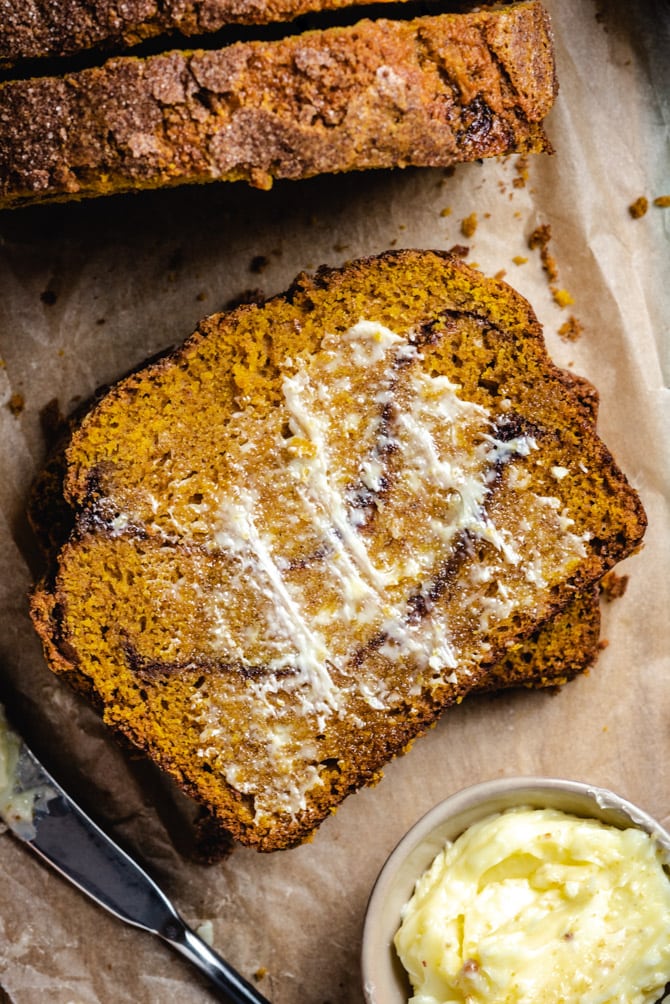