Tostones are crispy, savory, salty, golden coins of pure deliciousness. Popular throughout the Caribbean, twice-fried plantains are a snack that will make you feel like you’re walking on sunshine. And once you know all the tricks, they’ll come out perfectly every time. 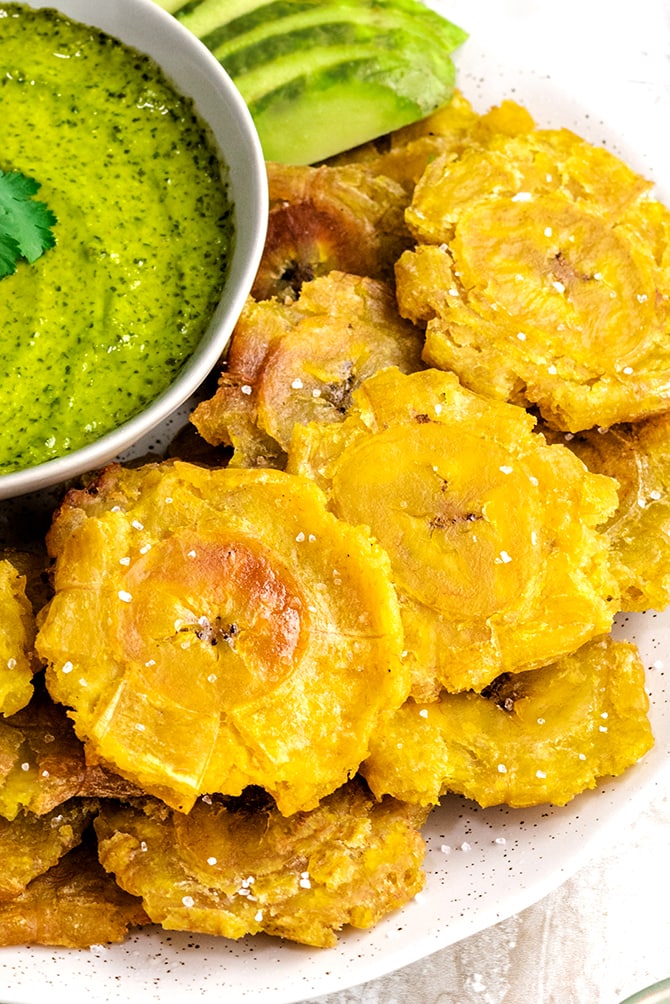 It’s no secret that I didn’t grow up in the Caribbean, but (probably surprisingly) like many kids that did, tostones were actually one of the first things I ever learned to cook. Like really learned how to cook, properly, from scratch, with pride and the sort of eagerness that naturally accompanies all foods as amazingly perfected as twice-fried green plantains.

I learned from a good friend in college, who generously offered to teach me how to cook some of her favorite Puerto Rican recipes after I complimented her cooking and told her how interested I was in really learning how to feed myself. (You know, not just the “try not to mess up boiling water for pasta” or “does microwaving freezer meals count?” kind of feed myself, but the “wow I actually made this” kind of feed myself.)

All I had to do was try Tostones once and I was in love. Their french-fry-like, golden-brown exteriors and tender, starchy interiors, all covered in salt and ready for dipping had me hooked. Then– to my great shock– even I, the most novice of cooking novices, wound up being able to make them! I don’t want to exaggerate, but tostones may actually have been one of the first ever recipes that made me believe I could a learn to make tasty food. And, well, would you look at me now, Ma!

So of course, I have to share my go-to tostones recipe with you. Spread the love! 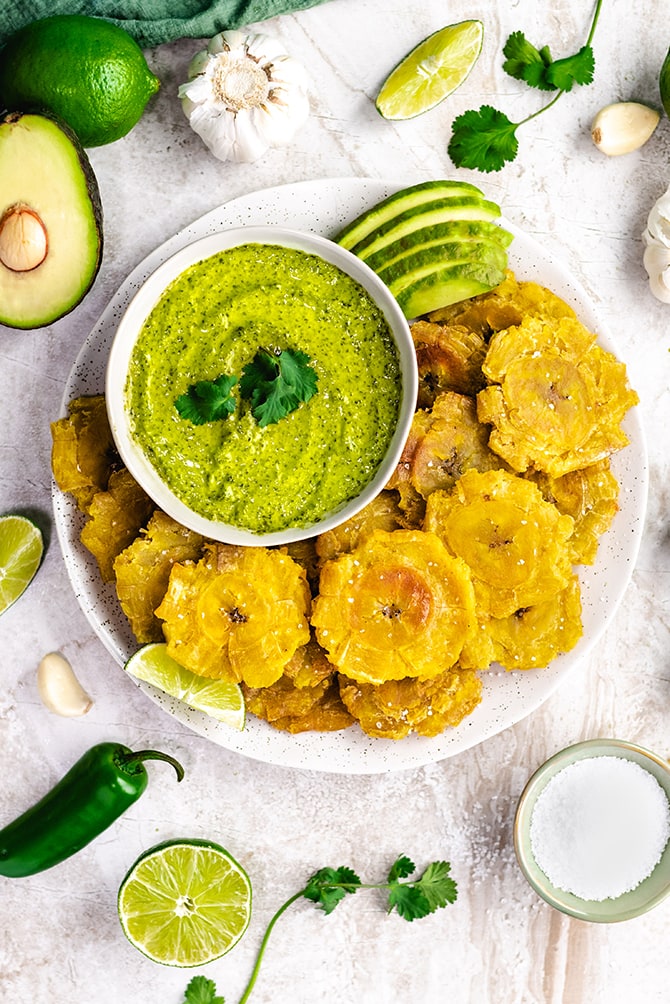 BUT WAIT, WHAT ARE TOSTONES?

Tostones (also known as Patacones) are slices of unripe, green plantains that have been fried, smashed, and fried again until crisp. They’re extremely popular in Latin American and Caribbean cuisine, where they’re just as commonly eaten as side dishes at the family dinner table as they are as late night snacks from street vendors.

While people often assume that they might have a sweet or banana-like taste due to the banana-like appearance of plantains, tostones are definitely a savory dish. Unlike bananas, unripe green plantains are incredibly starchy– more like a raw potato. They must be cooked in order to be eaten and enjoyed.

And, much like the potato, when fried, tossed with salt, and served with a little dip, they are definitely enjoyed. 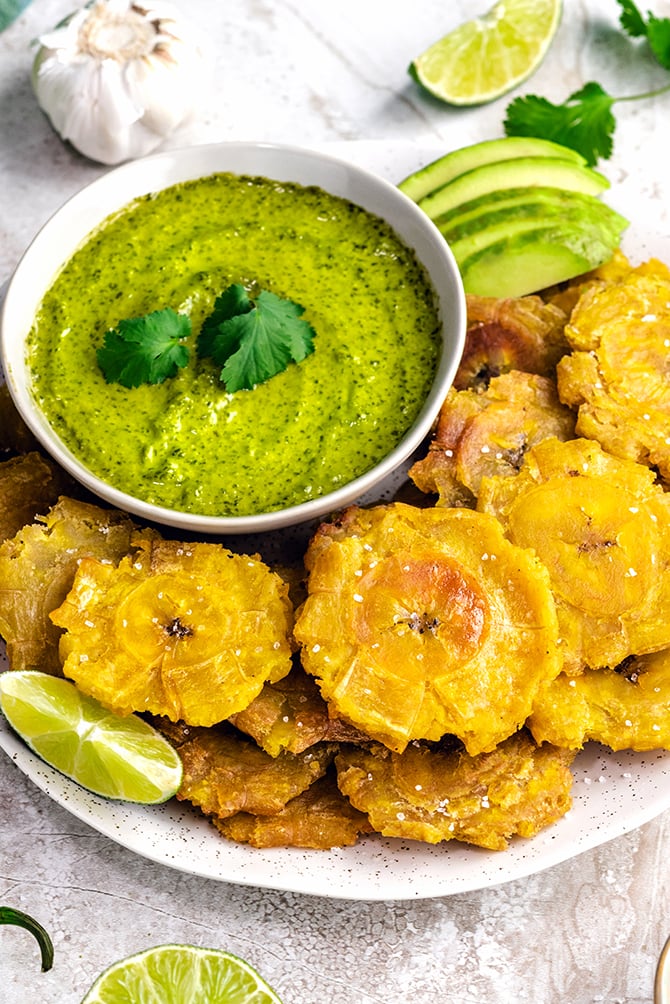 HOW TO MAKE THEM

I’m going to take you through each step with all the details so we can be sure that you get it right– 100% right– and you fall in love with these golden beauties just as much as I have. Sound good? Great.

WHY SOAK IN GARLIC-LIME WATER?

There are a few reasons for the garlic-lime water soak:

It should also be noted that many people say that this step will create a crisper exterior. I have tested both soaked and unsoaked plantains and there has not been a noticeable difference in the degree of crispness, so I’ll choose to leave that off of the list and call that one a myth. Sorry guys, but there are plenty of other benefits! 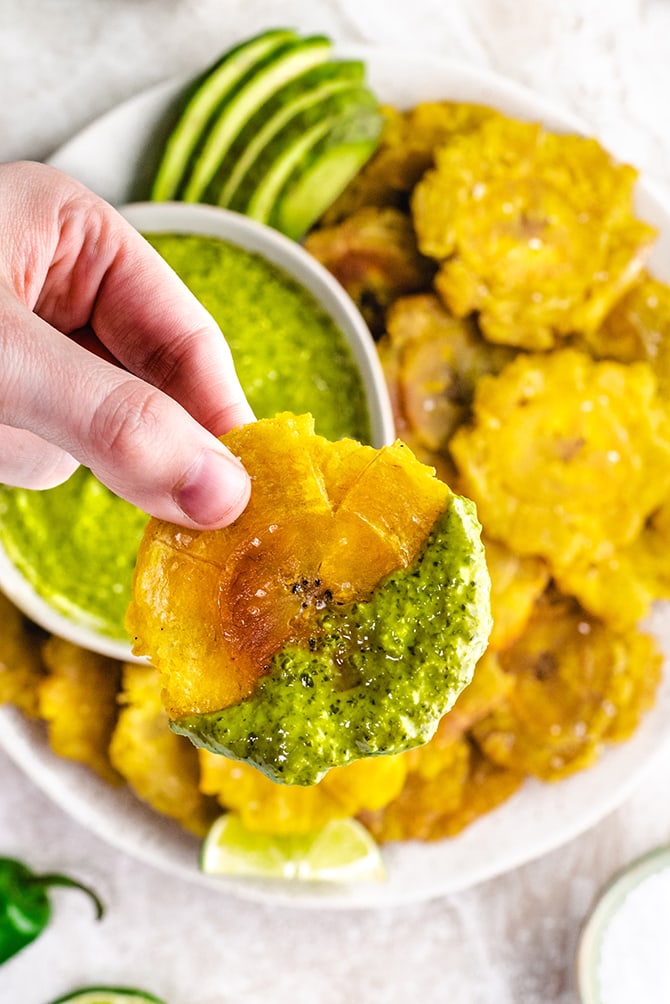 Tostones are best when served with dips! It’s common to serve them with Mojo de Ajo or Mayo-Ketchup (literally mayo, ketchup and garlic), but I personally like them best with: