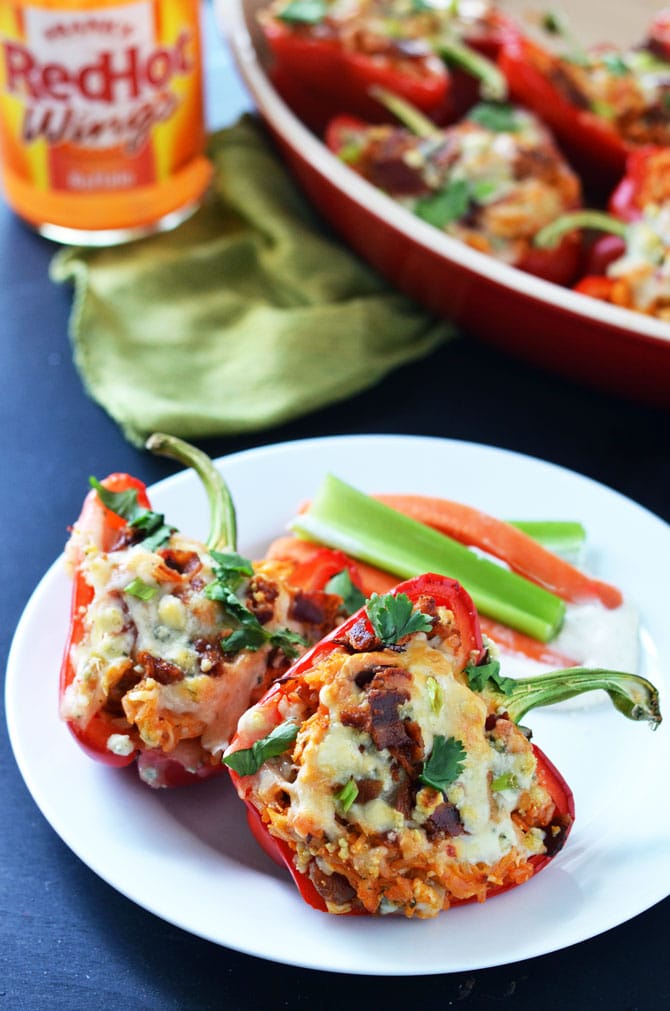 I can feel football season in the air. It’s coming. I keep hearing whispers of fantasy football drafts, predictions for the season, and plans for tailgates, and I am beyond excited. Not because of some burning, deep-in-my-soul love for the game (although I have to admit, I get a little bit intense when the season heats up), but because football season and buffalo chicken season are one in the same, and I can’t wait to douse everything that I touch in an ocean of Frank’s Buffalo Sauce.

I originally planned to hold off on the buffalo chicken creations until at least the first big game, but sometimes you just have to follow your heart down the path of spicy righteousness. Mine lead me directly to Buffalo Chicken Stuffed Peppers, loaded up with monterrey jack and blue cheeses, shredded chicken, rice, crispy bacon, and of course, buffalo sauce. 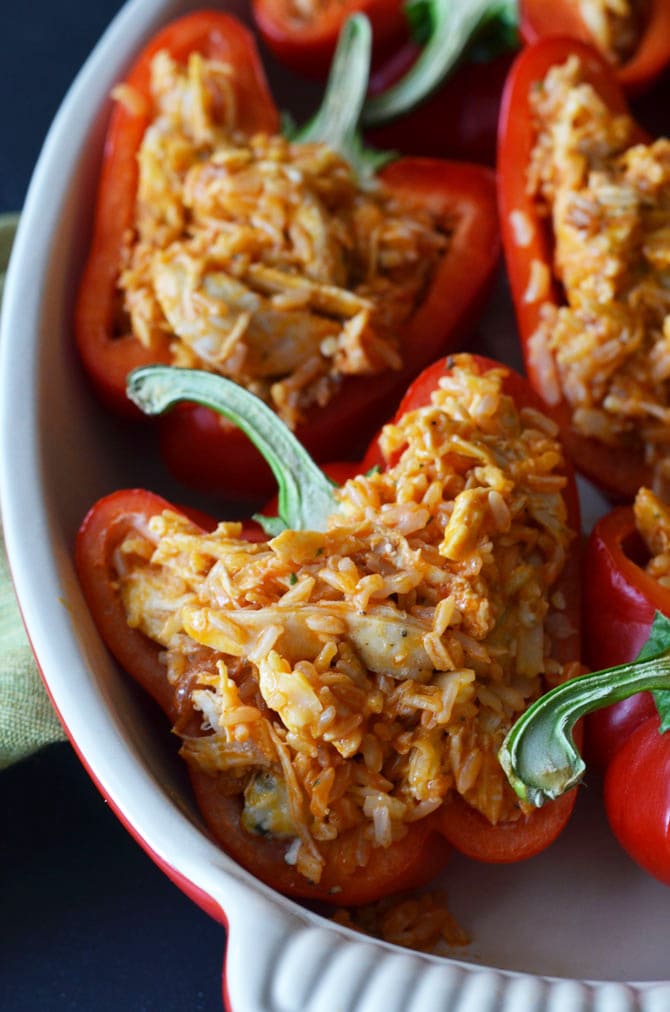 This dish has a lot of parts, but it comes together easily and deliciously. First, I cook the bacon until crisp, and then I boil the chicken breasts so that they can easily be shredded. Some people prefer to boil their chicken breasts whole, but here I decided to chop the chicken into large chunks first. Using chunked chicken allows it to cook quicker and prevents the chicken from overcooking on the exterior while the large interior area cooks. It also ensures that the shredded chicken pieces will be smaller and thicker instead of long and stringy, which makes it much better for stuffing!

While the chicken cooks, I prepare the rice and get the peppers in the oven to soften them up. It’s important to pre-bake the peppers or else they wind up too tough, and cooking them longer with the filling would overcook the chicken. Cooking the peppers in three intervals– pre-cooking, cooking when stuffed, and then once more after topping with cheese– gives you a tender pepper, warm filing, and perfectly melted (and slightly golden-brown) cheese. Yum. 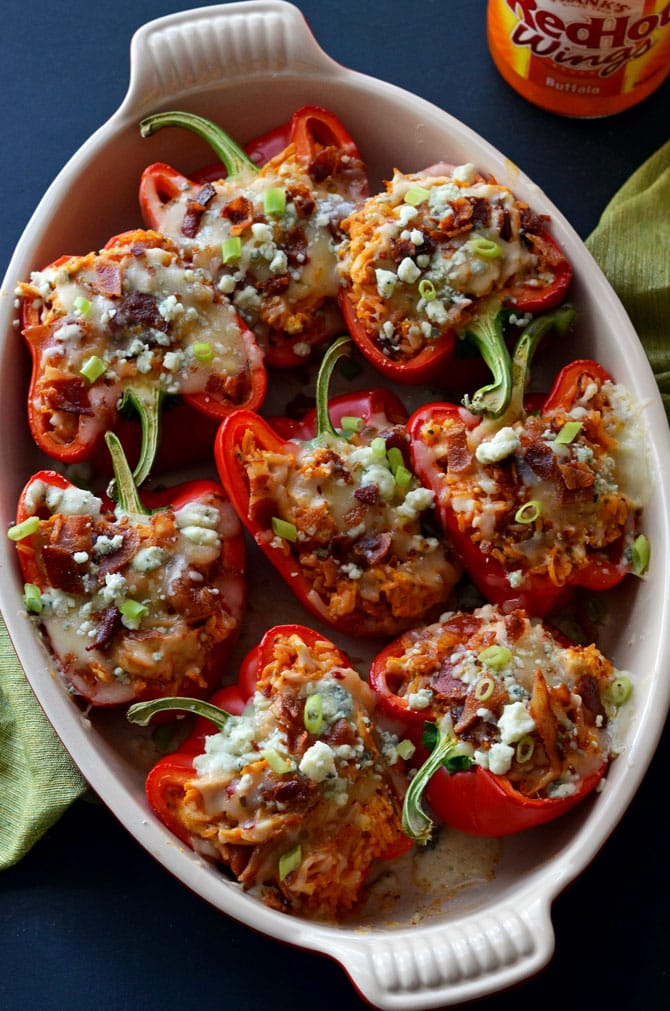 I use monterrey jack and blue cheese, but if you’re not a big fan of the blue, feel free to replace it with additional monterrey jack or cheese of your choice. You can also mix in dry ranch mix if you’re a ranch-fanatic. Feel free to make them your own!

When you make them, don’t forget to take a photo and tag #hostthetoast on Instagram or Twitter to show off your sauced-up dinner! Enjoy! 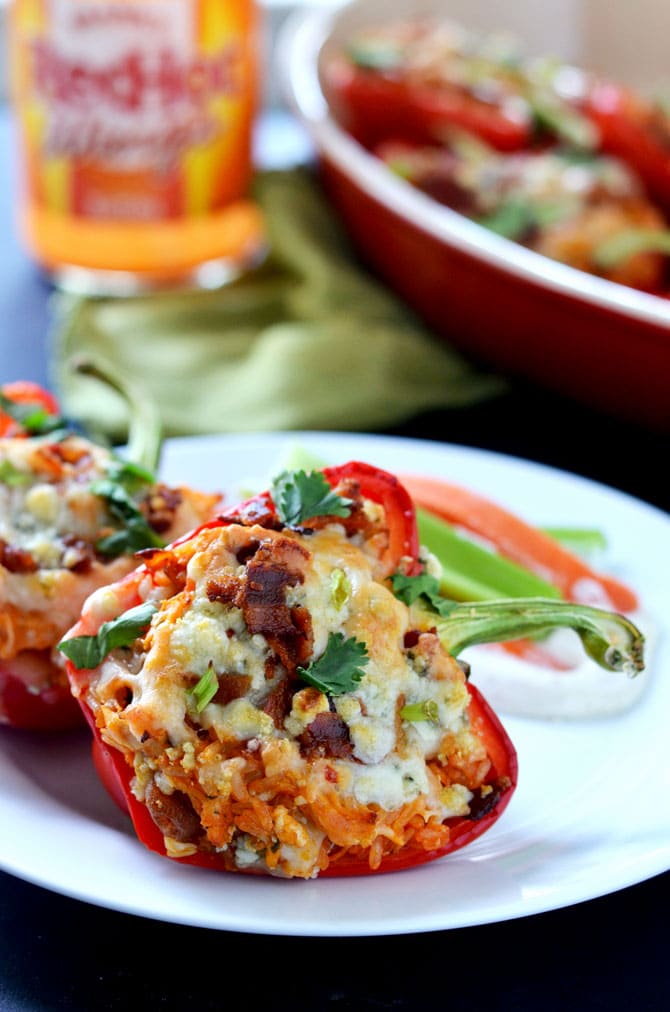