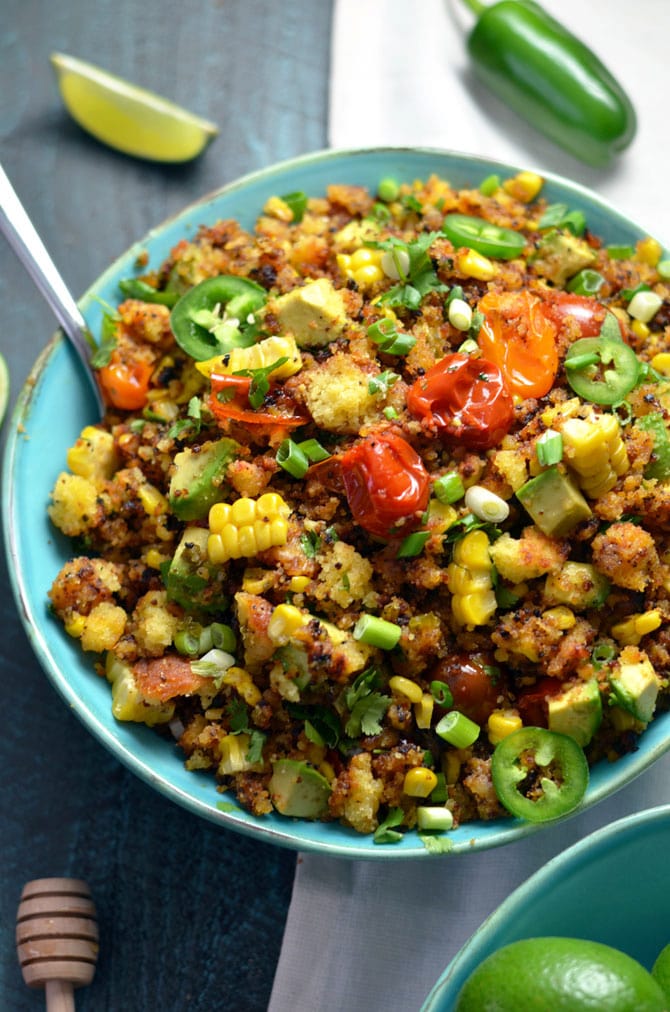 Usually when I hear the words “cornbread” and “dressing” together, I have Thanksgiving flashbacks. But not today.

Today, I’m having flashbacks to a weekend barbecue when I served up some Cornbread Salad with Jalapeño-Browned Butter Vinaigrette, which– with its ton of toasty sweet cornbread, creamy avocado, melted cheddar cheese, fresh corn, juicy popped tomatoes, and sweet, spicy, and nutty dressing– is absolutely and unmistakably summertime, my friends. 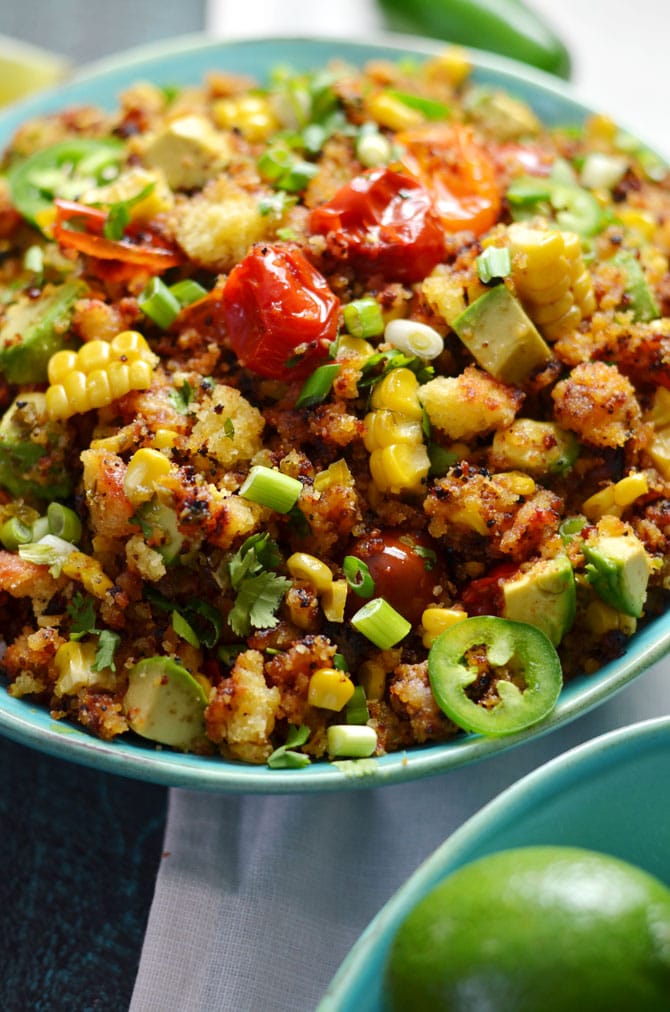 And by the way, it was a kickass barbecue. Somehow I convinced my college roommate to come celebrate her birthday in my backyard, with some great weather, sweet tea cocktails, pulled pork, burgers, and yup, cornbread salad. Guess what disappeared first?

Okay, if I’m being honest, the sweet tea cocktails disappeared first. They’re cocktails, what did you expect? But the Cornbread Salad with Jalapeño-Browned Butter Vinaigrette was a close second. A very close second. The thing about this recipe is that once you give yourself the tiniest bites-worth at the edge of your plate, you’re doomed. You’ll find yourself going back to spoon some more onto your plate again and again until not one crumb remains. 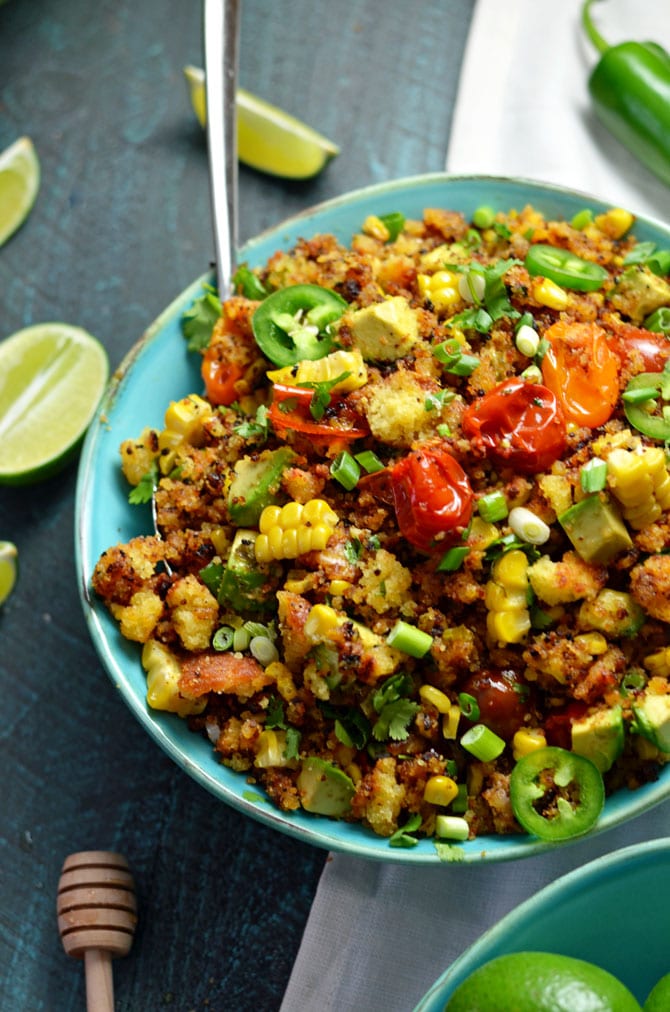 Just like with stuffing, I use crumbled, day-old cornbread for this recipe, but instead of soaking it in chicken stock, I keep it toasty and crumbly and drizzle it with the browned butter vinaigrette, which seeps in just enough to flavor everything but it doesn’t make it all soggy. Oh, and the juices from the tomatoes mingle in there as well, but like I said, no mushiness, mucho tastiness.

So it’s a bread and tomato salad kind of like Italian panzanella, but with corn and chiles like you’d find in the southwest, and buttery crumbled cornbread like you’d have in Thanksgiving stuffing. A little of the best of everything, just for you. 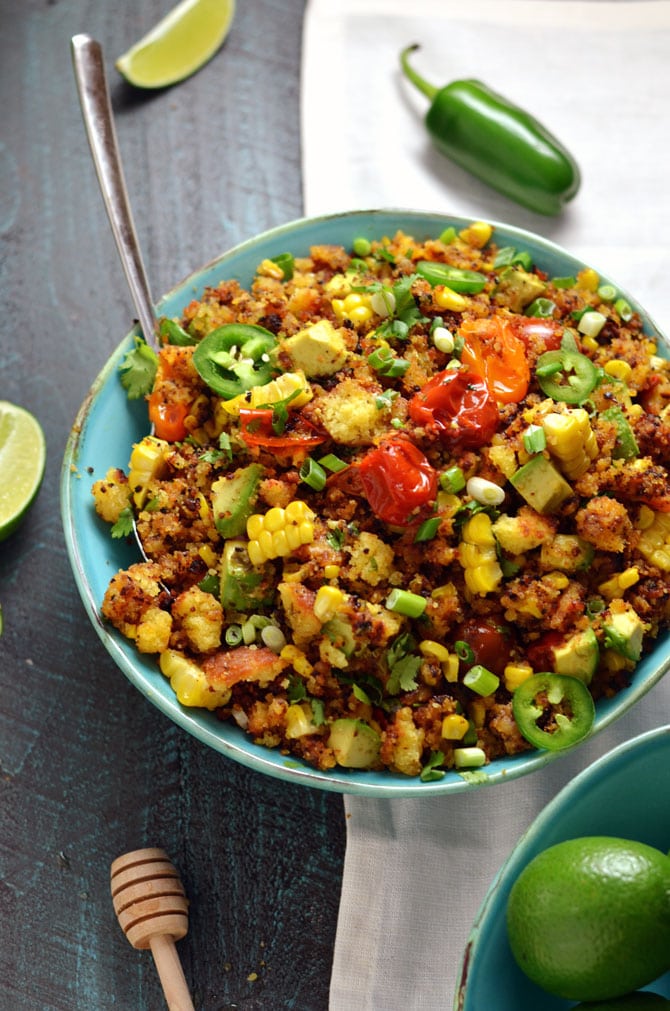 My favorite thing about it, though, is definitely the vinaigrette. I never thought to include butter in a salad dressing but oh man, does browned butter add something special to the mix. I’m half-tempted to make it for all of my salads, but I think it might defeat the purpose of loading up on the greens, ya know? For now, I’ll just stick to using it how I originally intended to. There’s plenty of beautiful days for more barbecues ahead, right?

When you have your next BBQ, make sure you take a picture of this Cornbread Salad (before everyone gets a scoop of it) and tag it with #hostthetoast on Instagram or Twitter. I can’t wait to see yours.