Seared (but still crisp) broccoli forms the flavorful base of this Charred Broccoli Salad with Hot Honey Dressing. With toasted pecans, sharp red onion, crisp bacon, tangy goat cheese, dried cranberries, and a sweet-and-slightly-spicy homemade hot honey dressing, this side dish has a little bit of everything for your cookout, dinner party, or lunch box. 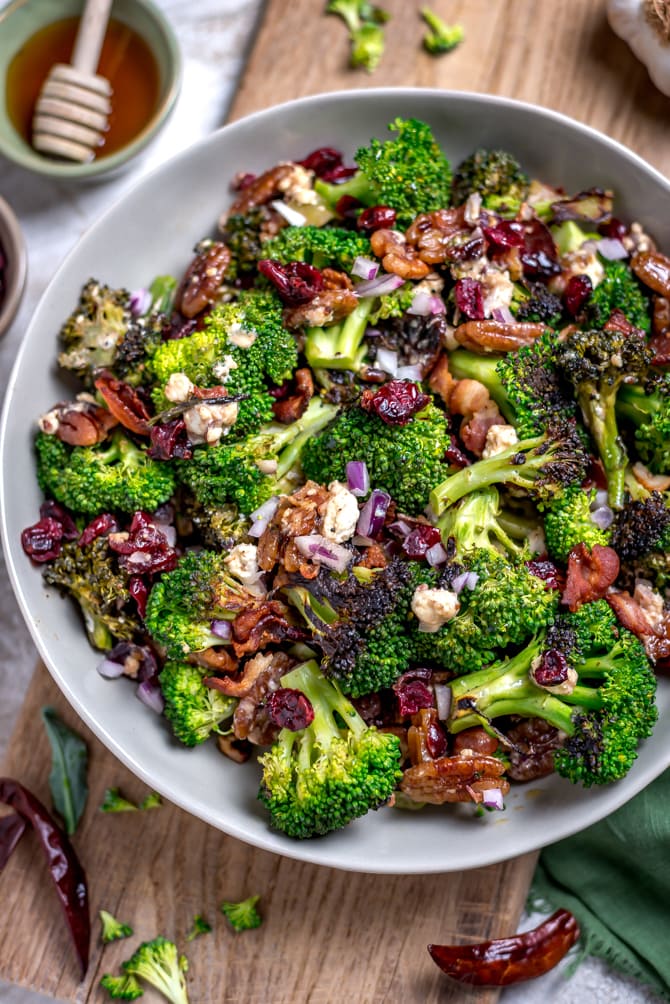 If you told me a few years back that one day I’d be at a cookout, bee-lining past the burgers and dogs and potato salad over to a big bowl of broccoli, I probably wouldn’t have laughed directly in your face (because I try my best not to be that openly and aggressively rude) but I would have, at the very least, side-eyed and pursed my lips at the idea. There was– at that time– no world in which I would have prioritized a plate of green veggies over anything else a potluck had to offer, but at that time I also had never had a good broccoli salad. And I’d definitely never had a broccoli salad anywhere near as amazing as this one.

Here’s what makes this Charred Broccoli Salad with Hot Honey Dressing a standout recipe that did, in real life, make me eat two platefuls of broccoli before moving on to anything else: 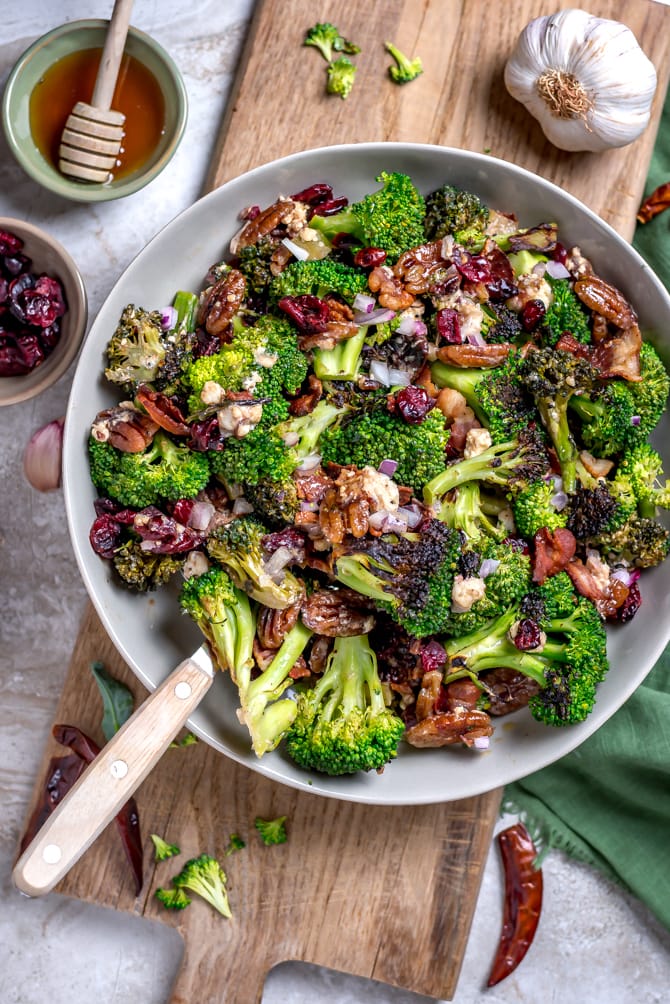 There was a time– a long time, actually– when all I really knew of broccoli was the microwave-from-frozen kind my mom served with dinner. The stuff I’d push around the plate and only take a few bites of when I was threatened with “You can’t leave the dinner table until…”

But as kids tend to do, I’ve grown up, and I’m now too mature to make faces at my plate full of veggies. Do I happily eat microwaved broccoli now? Nope, I just don’t make that stuff. Honestly, I didn’t make much broccoli at all until discovering the joys of roasted vegetables. Those charred, crisped, nearly-blackened bits of veggies are an absolute game changer! And now I think I’ve found something even better than roasted broccoli: skillet charred broccoli.

WHY CHARRING BROCCOLI MAKES A DIFFERENCE

If you like crisp broccoli but prefer the flavor of cooked (or better yet, well-browned) broccoli over the raw stuff, skillet charred broccoli gives you the best of both worlds. A quick visit to a hot skillet will deeply brown sections of the broccoli and ever-so-slightly cook the rest so it’s just minorly softer while still having some snap to it. This method also prevents the broccoli from going soggy when tossed with the honey dressing.  I use rendered bacon grease instead of oil to give the broccoli some added flavor as well– there’s no beating it.

HOW TO CHAR BROCCOLI

You might be tempted to chop the broccoli into little pieces and toss it into a hot skillet, but that’s actually not the best way to go about it. Doing so will mean that you’ll have to toss more frequently in order to get the hidden bits to brown, or you’ll have to overly char your broccoli (and overly soften it in the process). Instead, cut off the woody ends of the broccoli, chop off the stems, and then cut both the stems and the heads in half. Place the cut sides down in a pan and they will crisp up nicely and easily without having to toss constantly and disturbing the browning. Once the broccoli has cooled, then you can chop it up and throw it in a bowl for your salad! 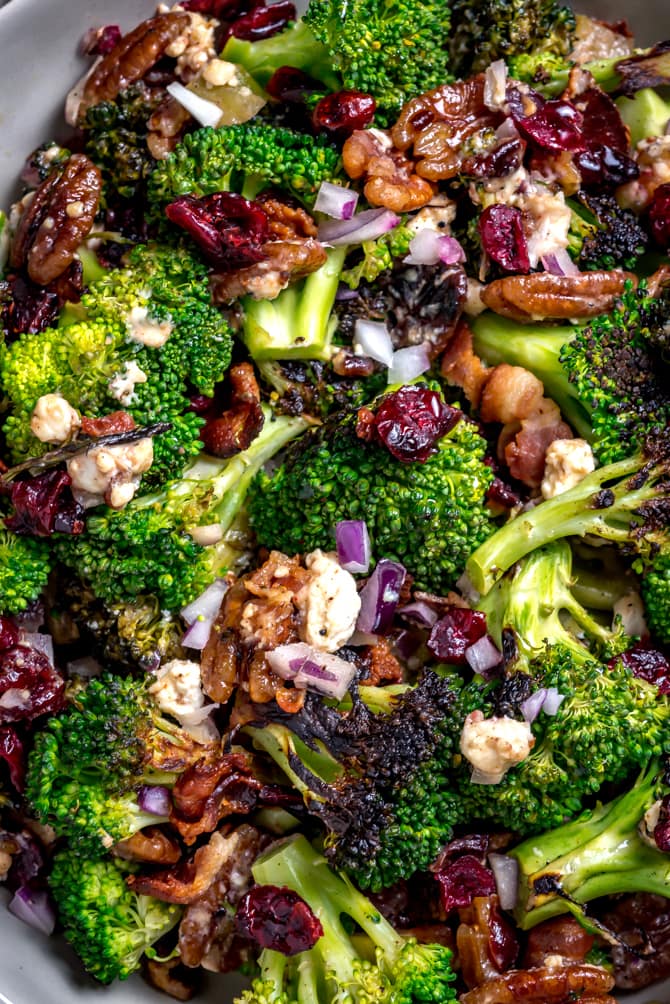 WHAT IS HOT HONEY DRESSING?

Hot honey, if you haven’t had it yet, is chili pepper infused honey that is basically the new sriracha– that is to say that it’s everywhere and people are obsessed with it (for good reason, it’s delicious). And while you can absolutely buy hot honey from the store and use it to make a dressing, for this recipe I save some cash by making my own at home with dried chile peppers, minced garlic, and yes, honey.

To transform the flavored honey into a dressing, all I do is whisk in some apple cider vinegar and olive oil as it cools! 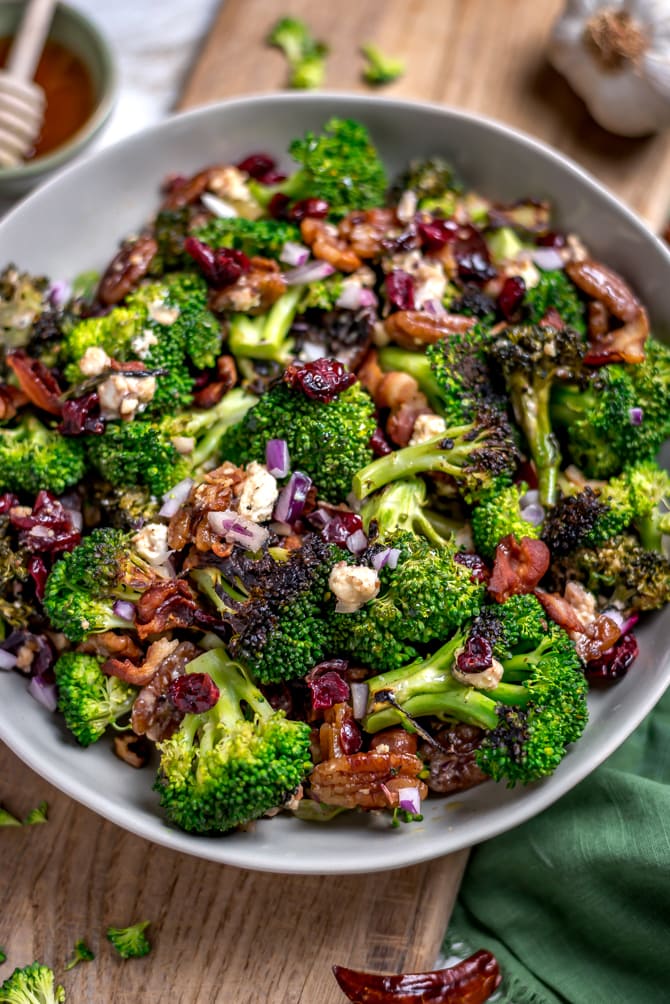 Luckily, if you don’t like goat cheese, you have tons of options. My most highly suggested? Blue cheese. It’s also a little funky, creamy, crumbly, and flavorful. It pairs fantastically with broccoli, cranberries, pecans, red onion, and bacon, and it’s similarly priced.

If all funky cheeses aren’t your thing, consider using aged cheddar or feta.

Almonds and walnuts can be swapped in for the pecans and toasted in the same manner. If you’re worried about nut allergies, go with sunflower seeds for nuttiness and crunch without the risk!

If you don’t eat meat, leave it out and just add a little smoked paprika to the hot honey to make up for the loss of bacon’s smokiness throughout the salad. 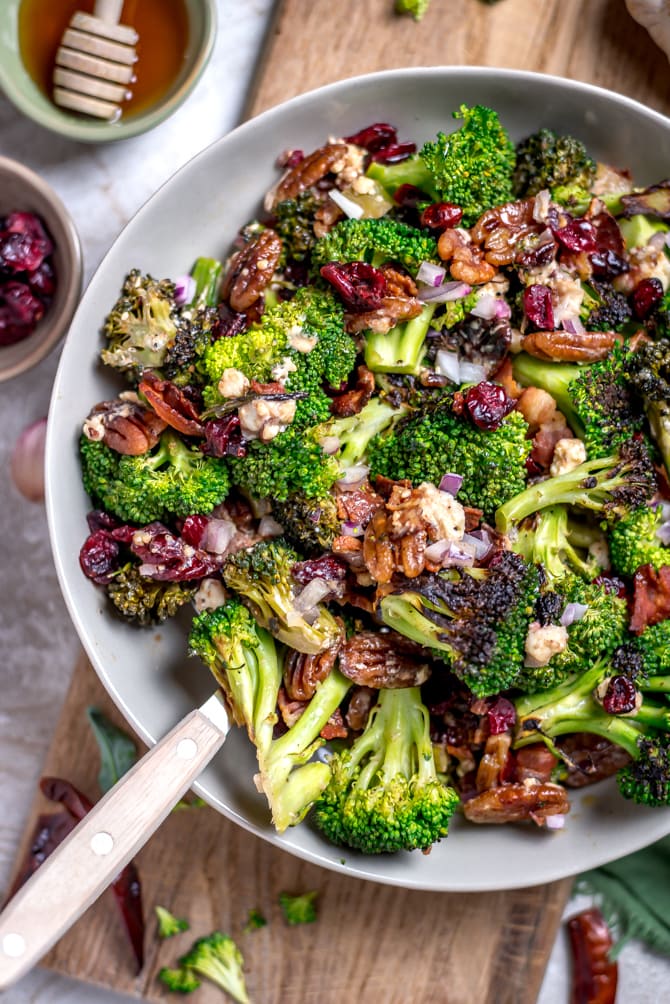 MORE SIDE DISH / SALAD RECIPES TO MAKE THIS YEAR

For more kick to your hot honey, you can either use hotter chiles or use more chiles, but don’t overdo it! If using milder, deeper-flavored chiles (such as chipotle chiles) increase the number of peppers used. Adding ground cayenne at the end can also help to pack more of a punch, so starting off conservatively and adding more spice later is an option!