This Easy Enchilada Skillet is a one-pot meal that features from-scratch flavors. (Yup, there’s no canned enchilada sauce in this one)! Loaded up with ground beef, beans, and corn tortilla strips; smothered in sauce and cheese; broiled until melty; and topped with tangy pickled onions and radishes, this dinner recipe has it all. 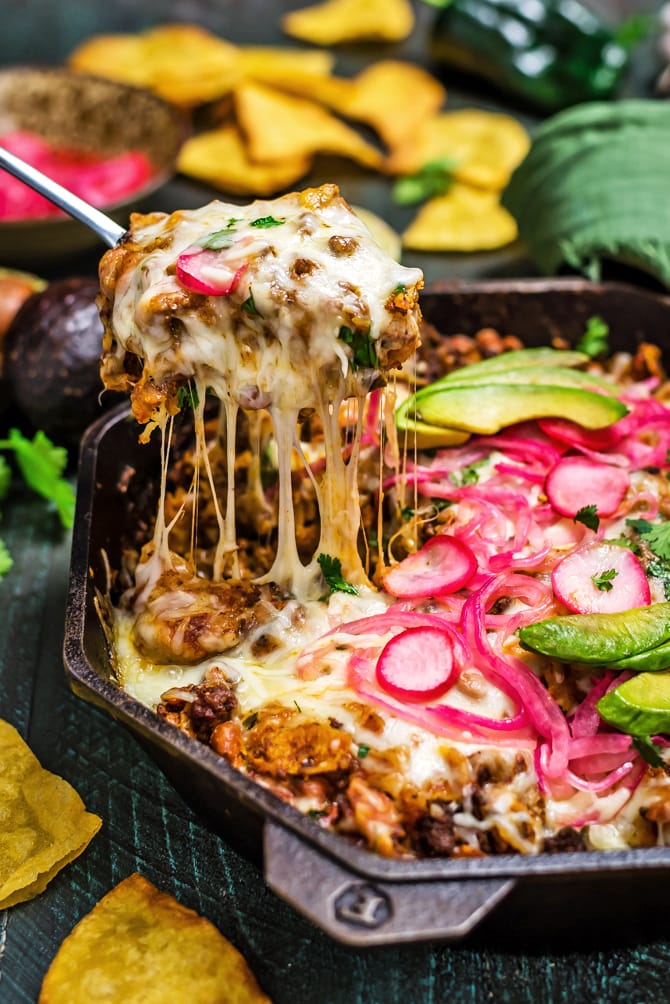 Someone needs to pry the taco seasonings from my hands because I’ve eaten Mexican food (or at least Mexican-inspired food) for dinner every single day for the past four… er, five days? Six?

You know, this is what happens when someone whispers the words “Cinco de Mayo” in my presence. You get me thinking about burritos and taquitos and enchiladas, and I can’t stop until every cell in my body is disgusted by the idea of ingesting one more tortilla-wrapped recipe. Honestly, I’m nowhere near that point yet. I’m riding the taco train ’til it breaks down, baby. 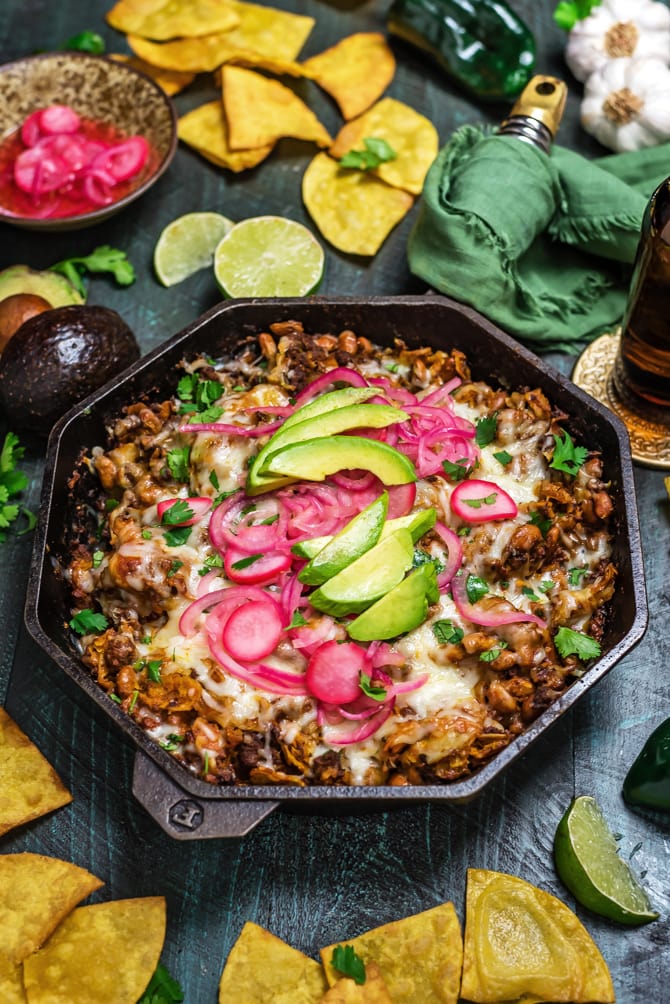 I think my favorite thing about Mexican food is that, while a lot of the authentic (and complexly flavored) versions do require some TLC, long-simmered sauces, and slowly braised meats, it’s also one of those cuisines that lends itself beautifully to quick-and-easy spinoffs that– while perhaps not traditional– are delicious solutions to a busy weeknight. This Easy Enchilada Skillet is one of those recipes– the kinds that everyone gets excited to eat but requires surprisingly little effort.

There’s no fussing with multiple pots and pans, blending sauces, roasting ingredients, and rolling up fillings, but there’s also no peeling back the plastic film on the microwavable meal and feeling defeated by the workweek. You can make this Easy Enchilada Skillet and feel proud of yourself while your kids (or friends or spouse or very satisfied tastebuds) cheer on your dinnertime victory.

All you need is ground beef, tortillas, red onion, a poblano pepper, and some pantry essentials (we’re talking spices, canned tomato sauce, and canned beans) to get started. Oh, and cheese. Did I mention cheese? The best enchiladas have lots of it. 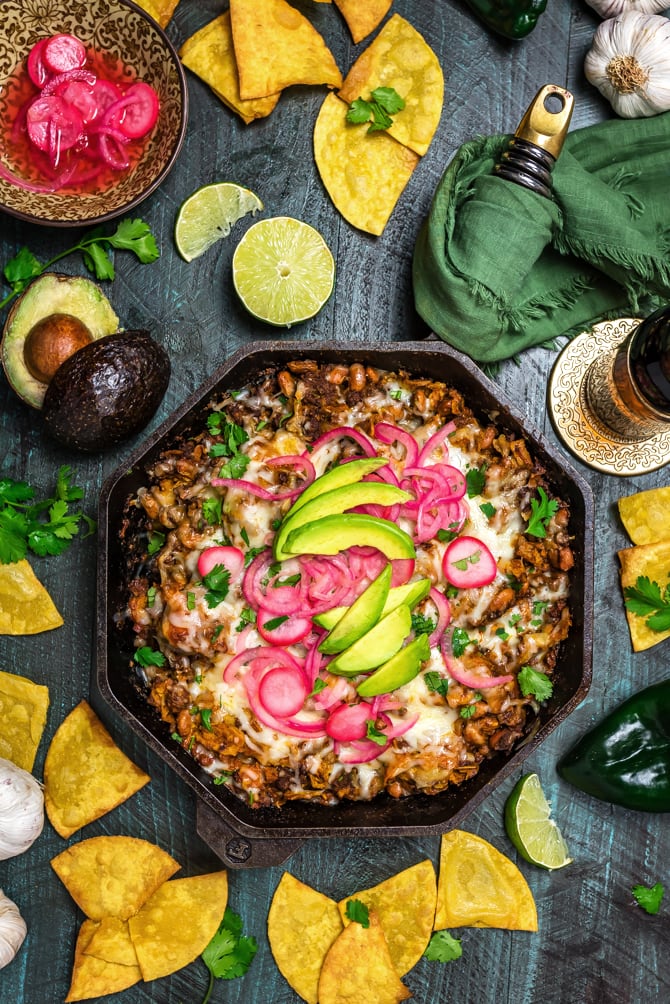 You might have noticed that I didn’t mention “canned enchilada sauce” in the ingredients above, and that’s because we don’t use that stuff. A while back, I created a recipe for an easy homemade version of enchilada sauce, so you might think we’re using that today, but for the sake of keeping this recipe to one pan, I decided not to take the extra time to make enchilada sauce to use in the Easy Enchilada Skillet. Instead, I further simplified the recipe so that the sauce would cook right along with the skillet ingredients and thicken as it simmered– no need for another pan. This requires a fair amount of spices, but most of them (if not all of them) you’ll already have on hand, especially if you cook a lot of recipes from this site. Yeah, I love chili powder, cumin, and smoked paprika. A lot. Could you tell?

CAN YOU SUBSTITUTE STORE-BOUGHT ENCHILADA SAUCE?

Sure, you can substitute canned enchilada sauce if you’d like. But honestly, making it yourself gives you so much more control. Control over the depth of flavor, over the heat level, over the consistency… and it really doesn’t require much extra effort at all. Like I said, it all cooks together! 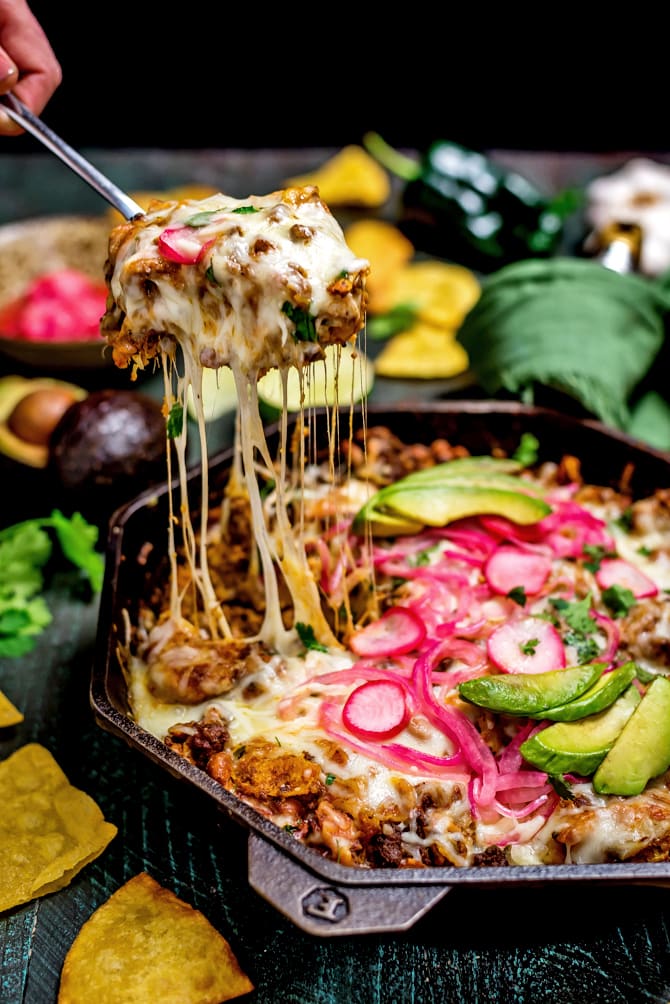 TO BEEF OR NOT TO BEEF?

Not a big fan of beef (or just not in the mood for it)? No worries, feel free to swap out the beef for other ground meats such as ground turkey or ground chicken. You also can press the water out of tofu and crumble it to serve as your protein, or similarly go meatless with extra veggies or beans instead.

In fact, I have another enchilada skillet recipe from way back when that is vegetarian-friendly. Feel free to check it out!

MORE ONE POT RECIPES TO LOVE: 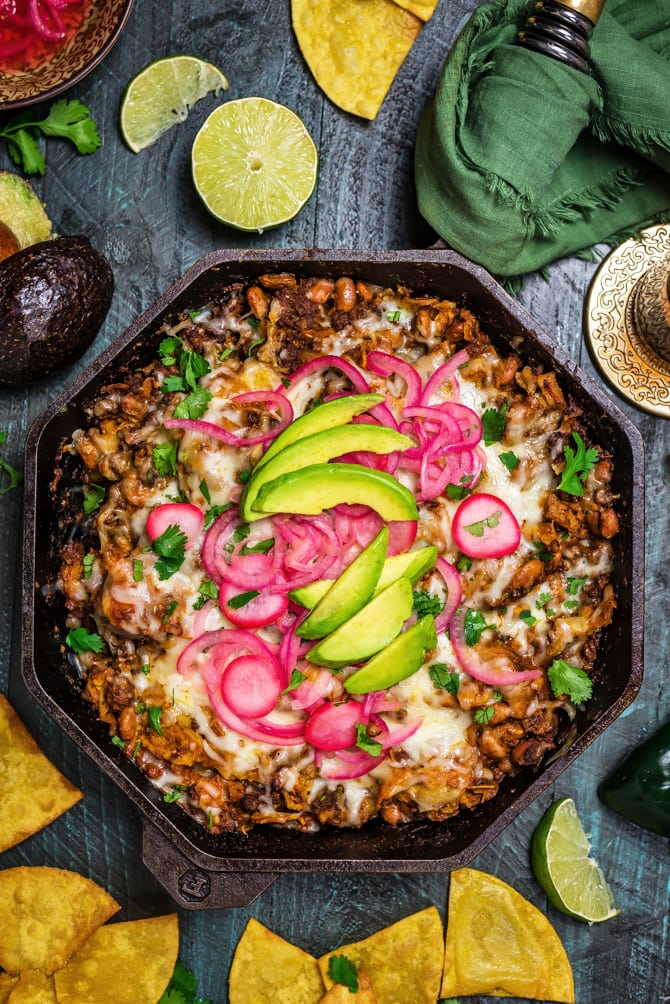