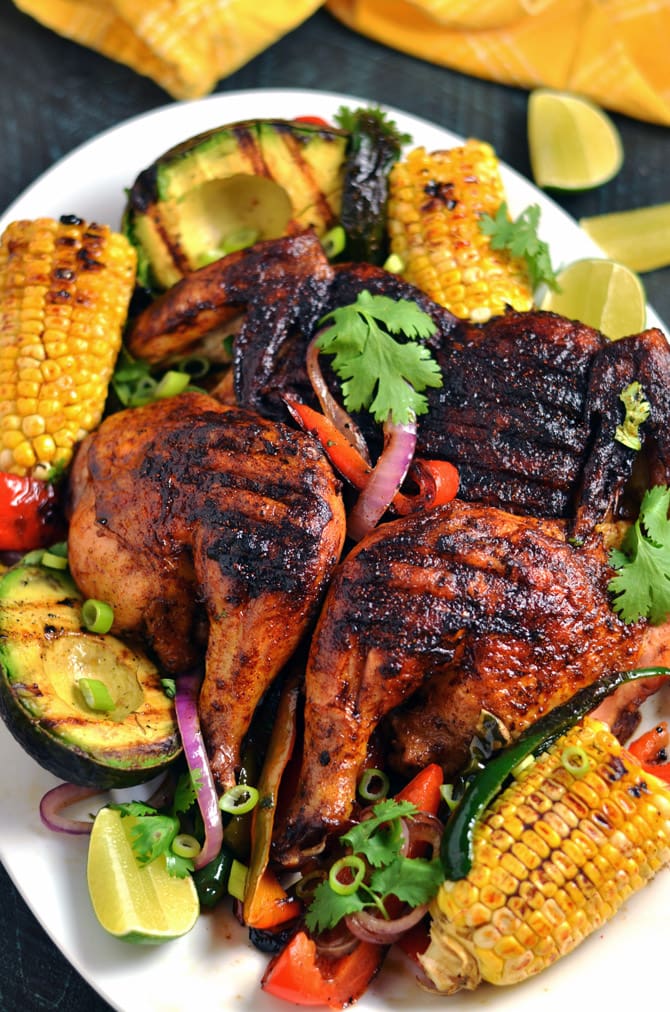 Say hello to the debunker of the Beer Can Chicken craze. You may think you know the tastiest way to grill a whole chicken, but I’m about to cast some doubt and introduce you to this delicious, crispy, juicy, spicy, delicious (again for emphasis) Mexican Brick Chicken with Grilled Corn and Avocados.

I’ll admit, there was a time when I thought that creating a chicken koozie would result in some good eats. I’ve tried Beer Can Chicken before, and it wasn’t half-bad. You know, because it was grilled chicken, and I tend to like that stuff.

But what people say about the beer steaming up and moistening the inside of the chicken? Please hear me out before you grab your pitchforks and assemble your angry mob, but I’m telling you, it doesn’t happen. When I made Beer Can Chicken, there was just as much beer inside the can after grilling the chicken as there was before, which makes sense scientifically because that beer can’t reach the proper temperature when it’s sill in a can and is jammed up a chicken cavity. 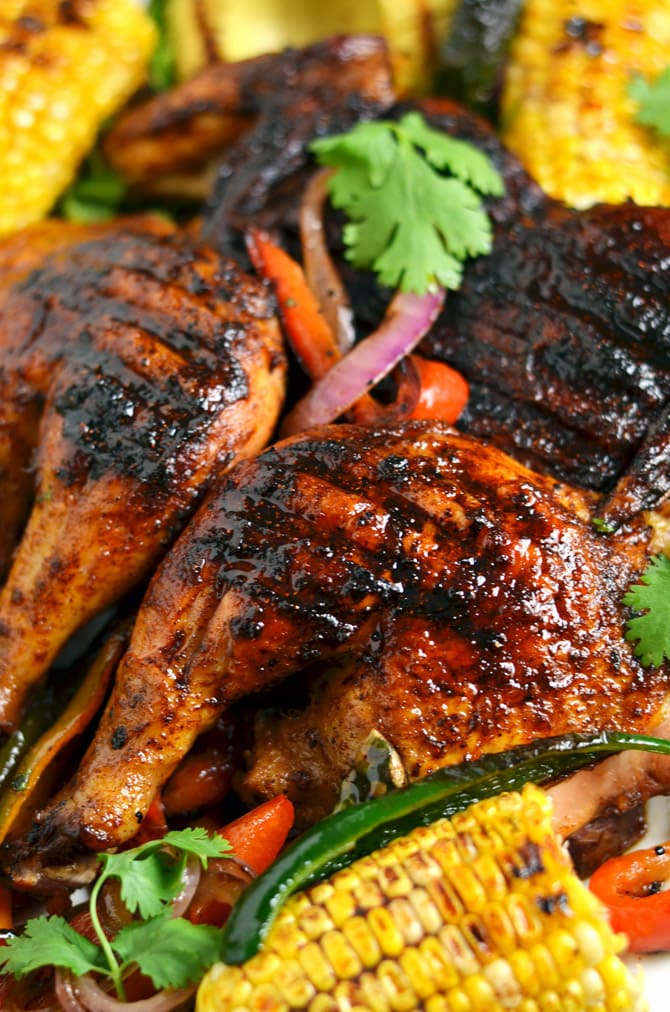 Don’t be mad at me; I’m just trying to set the record straight here.

The real reason that Beer Can Chicken winds up tasting better than a lot of other grilled attempts is that by cooking the chicken vertically, the legs reach their proper temperature of 170°F by the time the breast reaches a safe 150°F, since the legs are closer to the heat source. This means that you are less likely to have over- or under-cooked sections of meat, and perfectly cooked chicken is good chicken. But we can do better.

It’s all about the spatchcock.

Spatchcocking (or butterflying) the bird by cutting out its backbone and pressing it flat creates a more even shape for grilling, exposes the thigh meat so that it will cook faster, and also opens up what would have been the cavity so that marinade and seasonings can get all up in there. All of the benefits of cooking the chicken the beer can way, but way, way better.

Spatchcocking is relatively easy to do, but if you’d prefer not to take matters into your own hands, feel free to ask the butcher at your local grocery store to do it for you. 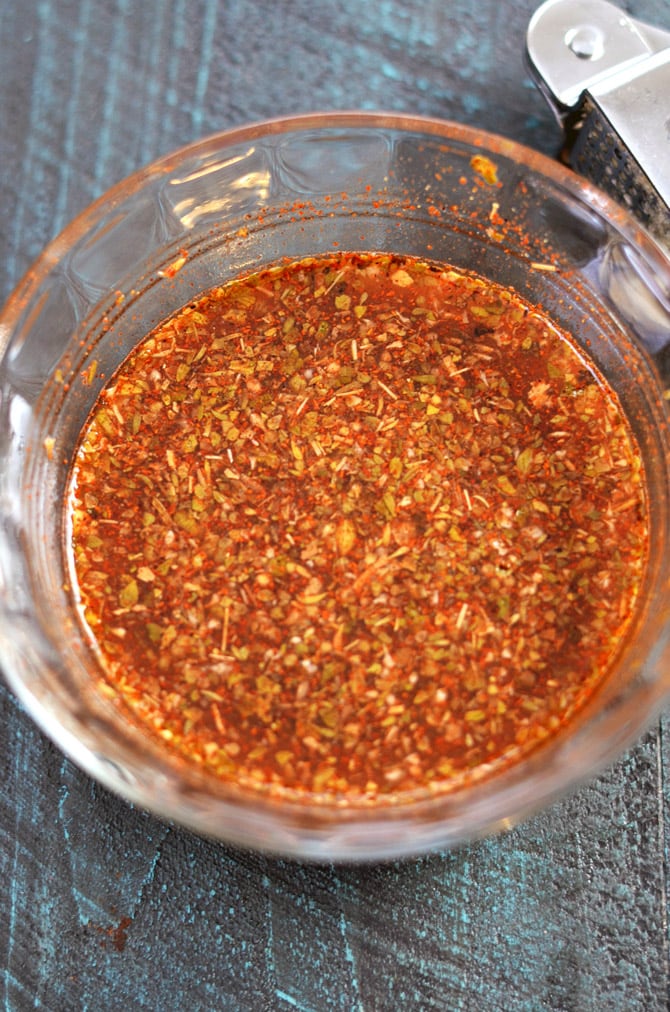 A few hours before I light up the grill, I make a marinade of ancho chile powder, salt, oregano, cumin, cinnamon, garlic, vinegar, orange juice, and olive oil. I slather it all over the chicken and let it soak up all of that flavor, while setting just a bit aside to brush the peppers, onions, avocado, and corn with. If we’re making grilled chicken, we might as well make a whole feast to go with it, right?

By the way, the flavor and moisture you get from that marinade is a million times more than what you could ever get from sticking a beer can in your chicken, I promise you that. 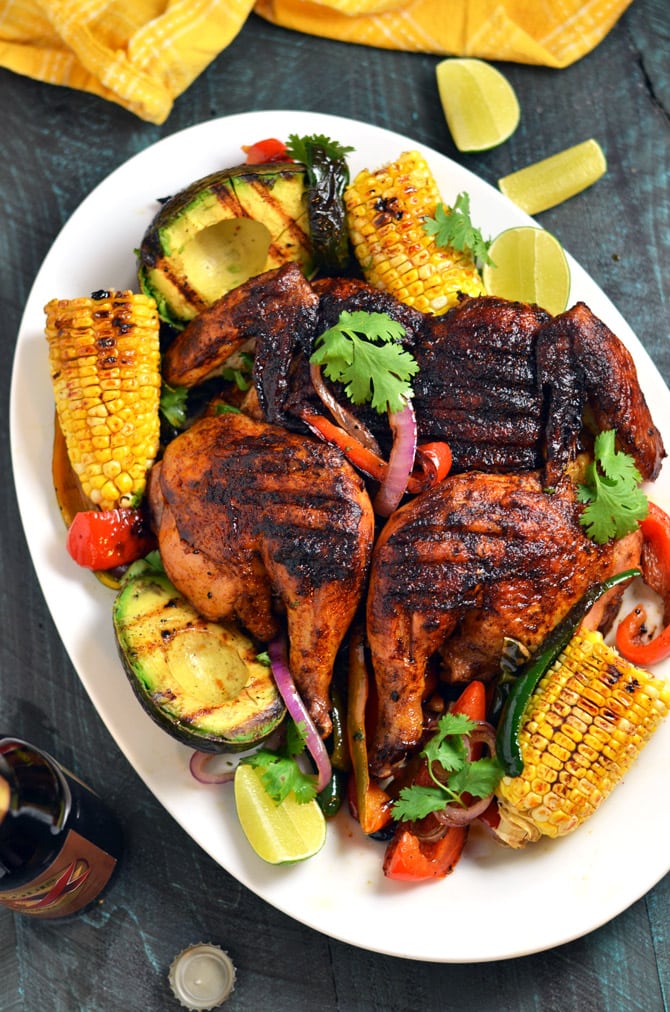 And as if that wasn’t enough, I take it a step further and put some weight on the chicken as it grills, which renders out some of the chicken fat as the bird cooks, making the skin ultra crispy. There will be some flare-ups, but not to worry, it just gives some of the marinated skin a great char. It also makes the whole chicken flatten further and therefore take less time to cook. That’s a win in my book, because even thinking about Mexican Brick Chicken with Grilled Corn and Avocados gets me both SUPER HUNGRY and SUPER IMPATIENT.

Some people use foil-wrapped bricks for that step, as the name “Mexican Brick Chicken” suggests, but I like to use a heavy cast iron skillet to weight down the chicken instead. Whichever is easiest for you, go for it.

By the way, this chicken got absolutely devoured. My housemate Mike– who isn’t big on compliments– actually said “This is why it’s great to live with you” as he finished his second plateful. James liked it enough that he kept taking more chicken even though he was stuffed from a work event he had just before. Let’s not even get into how much I ate. 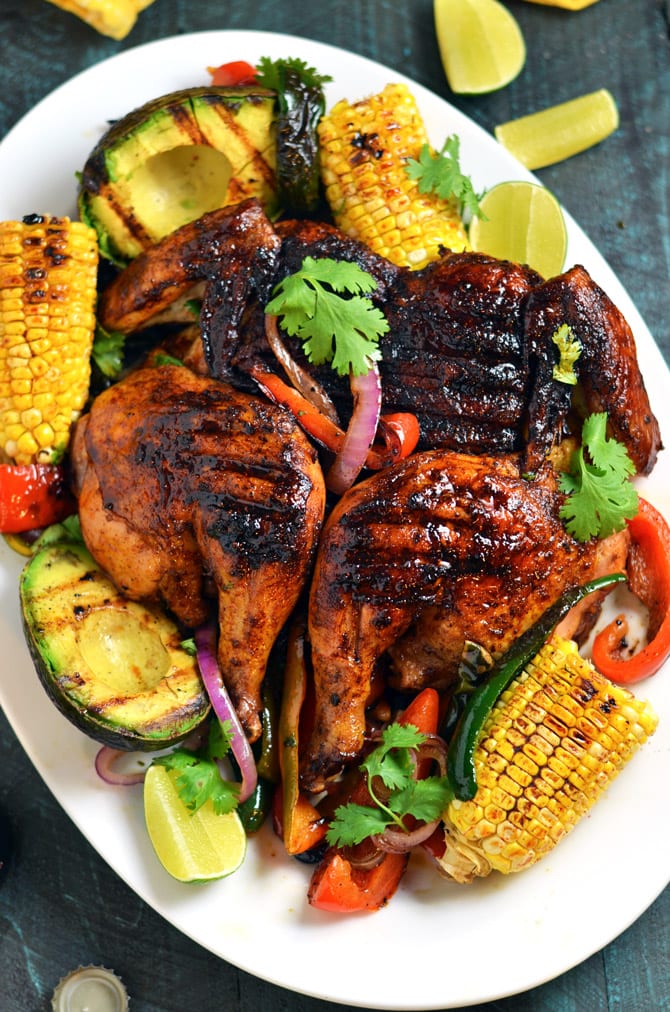 This chicken is bound to be as much of a hit at your house as it is at mine. You don’t have to take my word for it, try it yourself and let me know if the consensus is that it’s the best damn grilled chicken your family and friends have ever had. I’m putting my money on “yes”.

(And to really give them the full experience, serve the chicken with some cervezas and tortilla chips.)

Oh, and before I forget, don’t forget to take a picture! The chicken is too pretty to not snap a few. While you’re at it, be sure to tag #hostthetoast on Instagram or Twitter so I can drool over your Mexican Brick Chicken. Can’t wait to see it.