This shop has been compensated by Collective Bias, Inc. and its advertiser. All opinions are mine alone. #VivaLaMorena​ #CollectiveBias 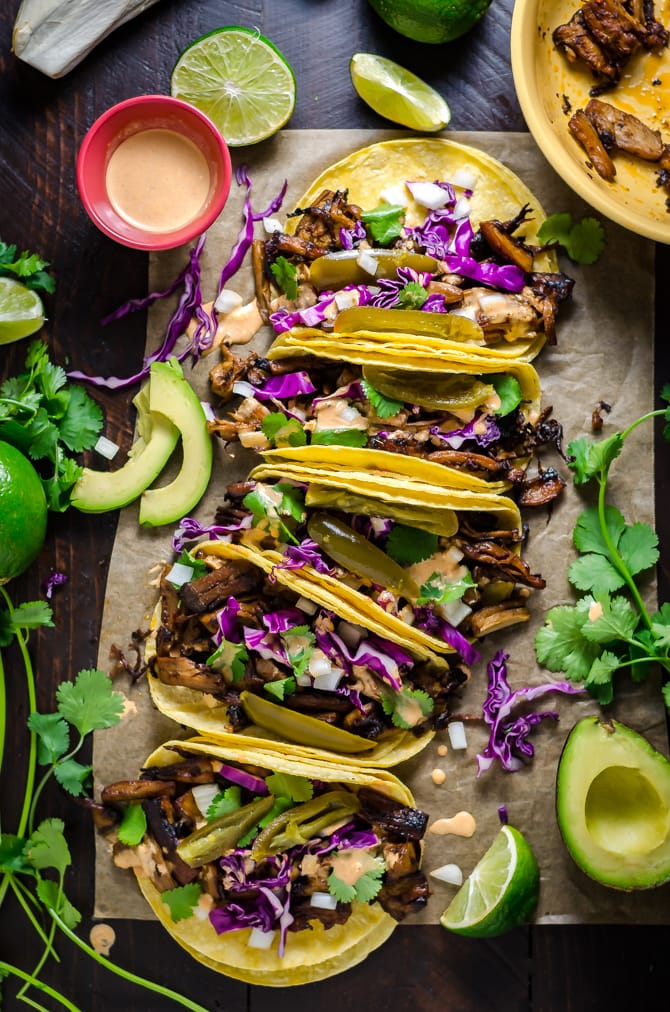 Ah, Lent. The time of year when, on top of the normal “what should we have for dinner” daily conundrum, many people also have to consider what indulgence they’ve given up for 40 days, and what day of the week it is, and of course how many weeks in a row they can stomach eating fried fish.

Seriously, every Lenten Friday you might notice that every restaurant reeks of oily seafood– especially up here by the shore. James (with his aversion to all ocean-dwelling things) tries to avoid eating out at all costs on Fridays during Lent because he can’t stand the smell. And even though I enjoy a basket of fish and chips as much as any other gal, it’s time we diversify this whole Friday meal plan thing.

As my vegetarian pals out there know, the task of finding a meat-free dinner that’s delicious (and not deep-fried) isn’t nearly as hard as it seems initially– and the criteria doesn’t constrain you to a diet of only salads and tofu. There are meals out there that are so deeply packed with flavor that you won’t miss meat for a second. Take, for example, these Mushroom Carnitas Tacos. 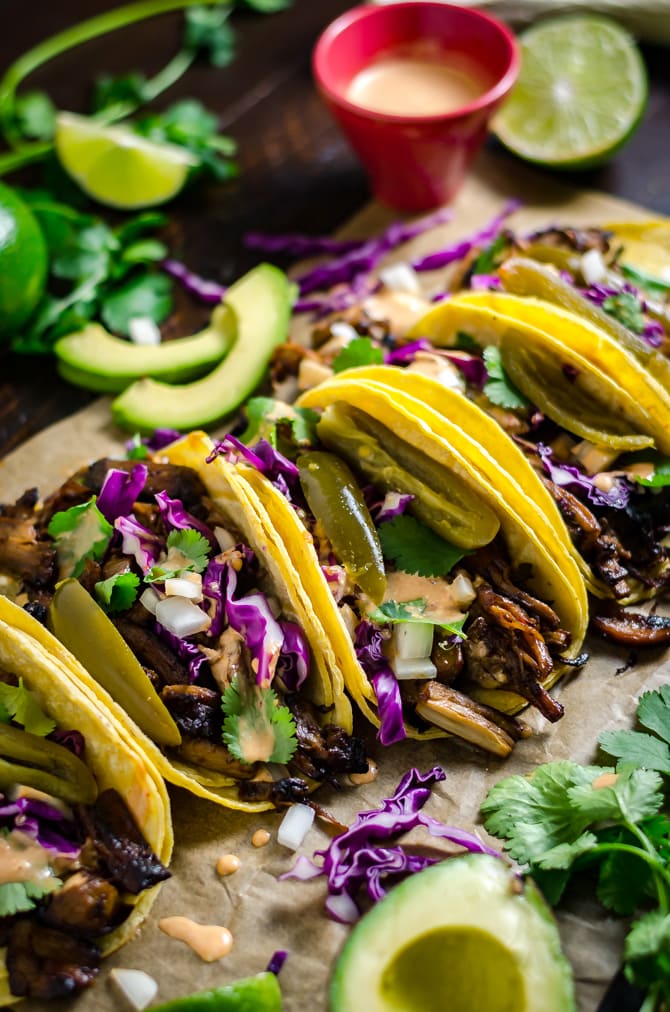 It looks a bit like pulled pork or chicken in there, but these tacos are actually made of king oyster mushrooms, which pull apart easily after being cooked in liquid. King oyster mushrooms are gigantic and honestly pretty strange-looking, but luckily they taste much, much better than they appear. They’re earthy but mild, and boast a denser, chewier texture than other mushrooms.  In fact, they’re often described as having an almost meaty texture.

If there’s an Asian Market by you, you should be able to find them there, no problem. If there’s not, and if your local grocery store doesn’t carry king oyster mushrooms, feel free to substitute in portobellos or other easily-available ‘shrooms. They won’t pull apart the same way or have quite the same texture, but as long as you like mushrooms, you’re still going to love them.

Since cooking the mushrooms in liquid is the best way to get them to have a great consistency, I flavor my liquid with orange juice, lime juice, cumin, bay leaf, garlic, and most importantly, LA MORENA® chipotle peppers in adobo sauce. They are my holy grail ingredient (as you can probably tell from the 12 billion chipotle recipes I have on this blog), and they make these mushrooms smoky, slightly spicy, and intensely tasty.

You’ll be able to find LA MORENA® chipotle peppers in the international aisle at Walmart– usually they’ll be near the salsas, as you can see in the picture above. To learn more about LA MORENA® products, what to make with them, and where to find them, check out their site. 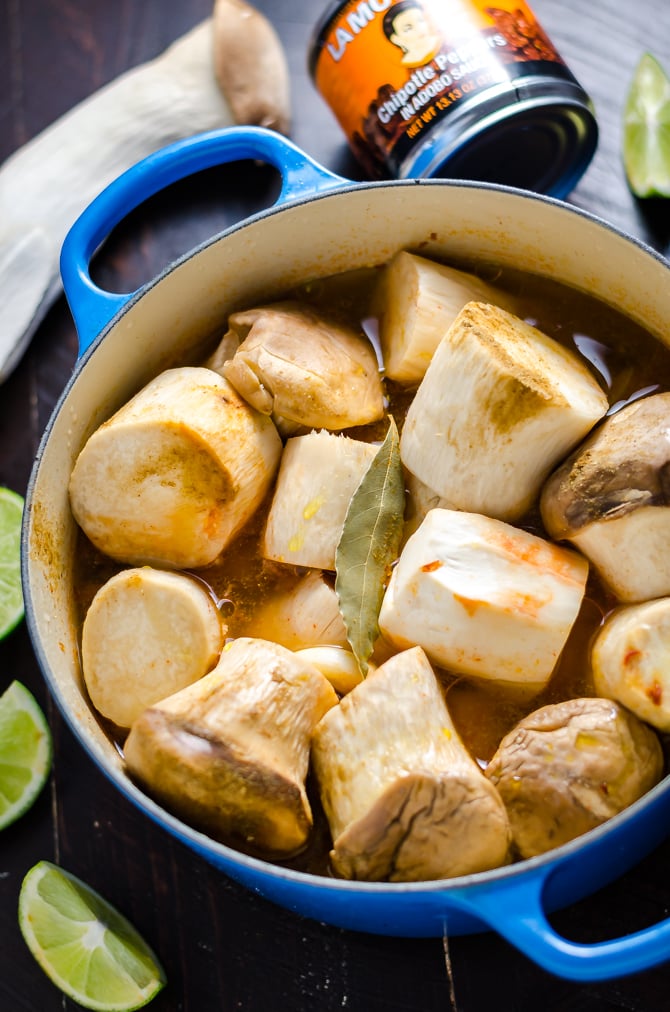 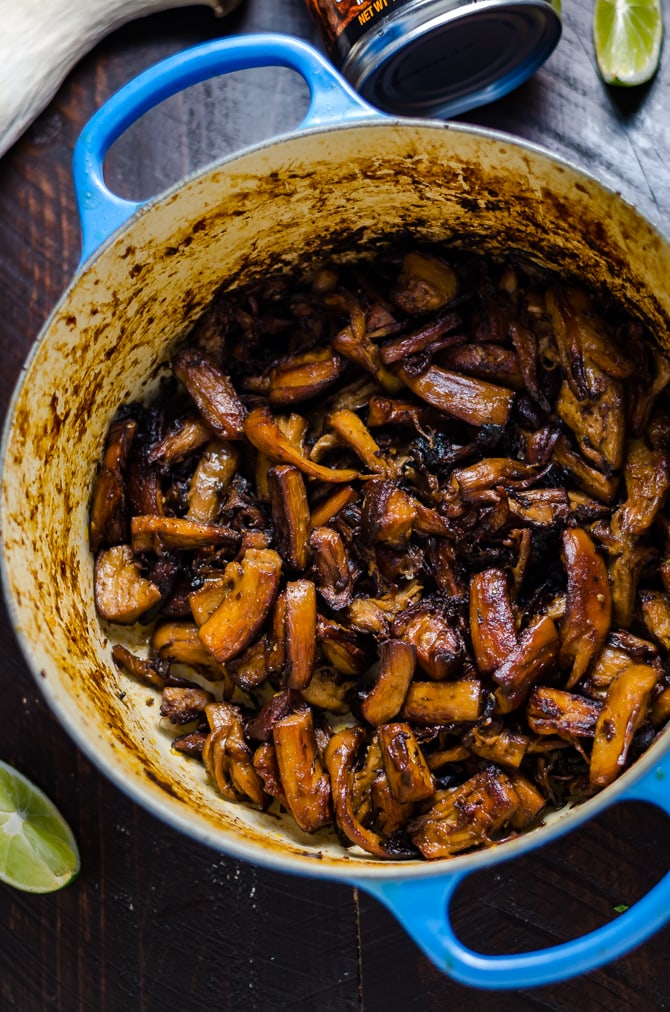 The greatest thing about cooking these mushrooms in liquid is that I just keep cooking until the liquid mostly evaporates and thickens into a sauce that clings to the mushrooms– no extra work required. Then, I drizzle them with just a little oil and let them blacken a bit to get super crisp and flavorful around the edges. They wind up having all of the crunch and flavor or pork carnitas, with some added earthiness (and of course they’re meatless, Lent-friendly, and less expensive). 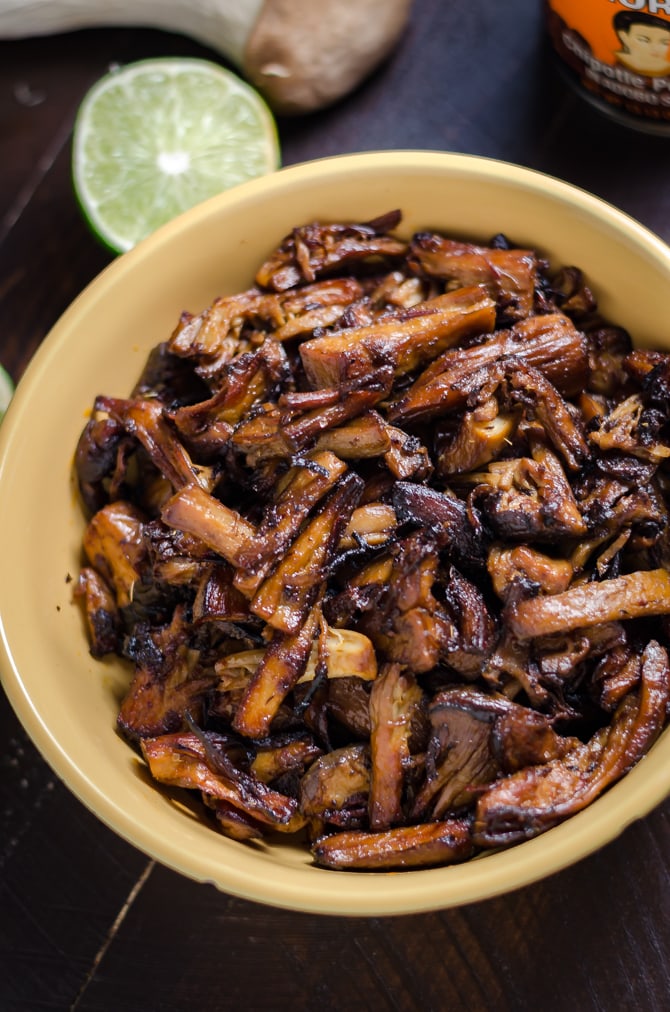 I knew that the mushroom carnitas would be good, but I never imagined how addictive little mushroom morsels could be, even before piling them up into tortillas. I found myself picking at them non-stop, double and triple and quadruple checking that they actually were that good.

This is the type of vegetarian food that I could live off of. James even tried and surprisingly enjoyed these, and mushrooms are the only thing other than seafood that I haven’t gotten him to budge much on in the pickiness department. “They’re still mushroom-y but they’re actually pretty good,” he said. I’ll take it. 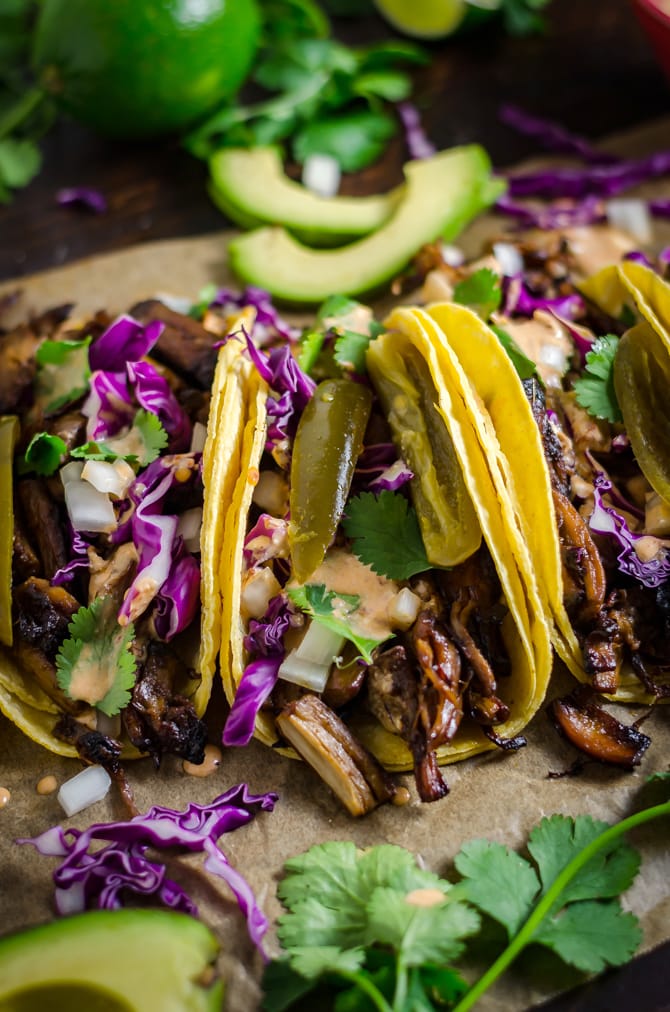 Like I said, they’re awesome without being tucked into tacos, but why rob yourself of the opportunity? Go all out with these mushroom carnitas by wrapping them in corn tortillas, topping them with crunchy cabbage and creamy avocado, sprinkling them with sharp raw onion and fresh cilantro, drizzling them with chipotle mayo (or vegan chipotle mayo, if that’s more your style), and lastly, topping them off with LA MORENA® Sliced Jalapenos.

Hey, if you’re going to do it, you might as well do it up. At least that’s what I told myself as I downed 3 of these jam-packed Mushroom Carnitas Tacos. 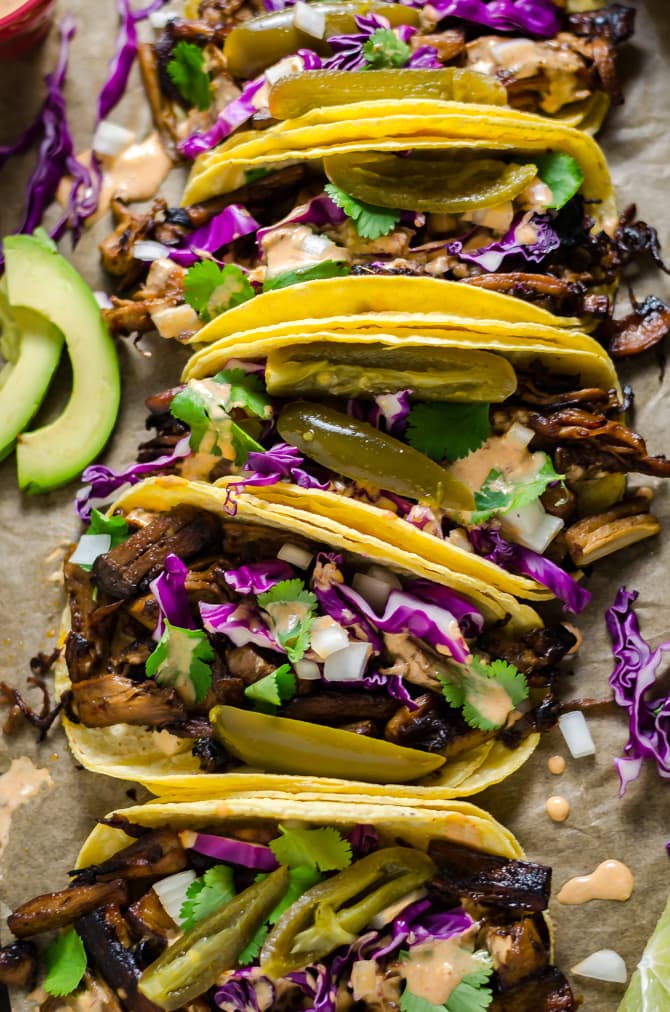 For the Mushroom Carnitas: