This recipe for Nacho Baked Potatoes has also been featured on Serious Eats. 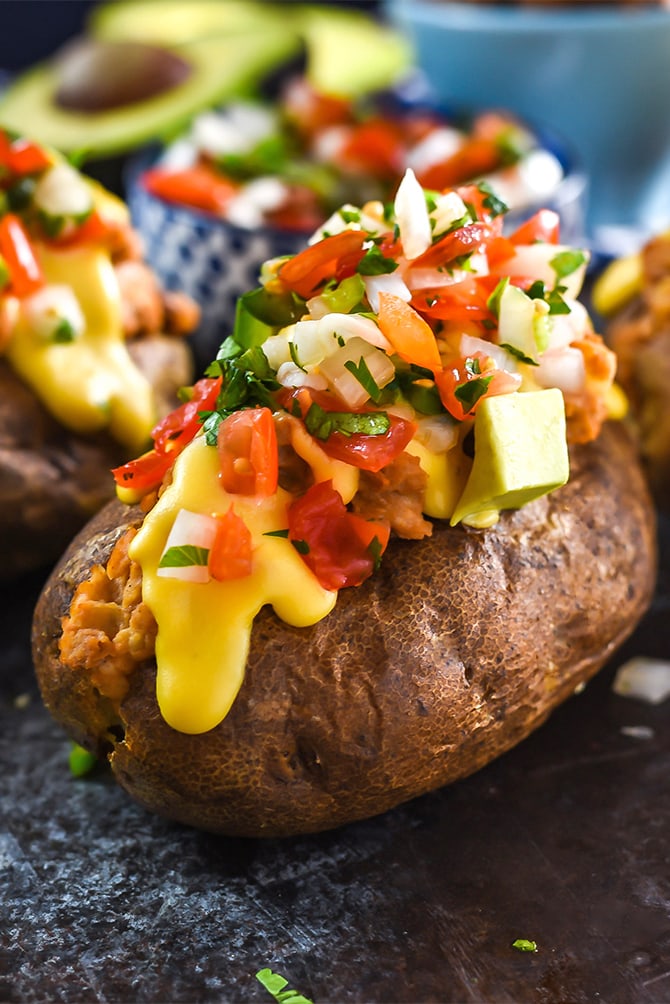 It’s almost St. Patrick’s Day, so naturally I’ve been day-dreaming endlessly about salty corned beef, flavorful cabbage, fluffy baked potatoes (like these!) and, uh… nachos? Alright, so this wasn’t the recipe I originally planned to share with you today. I had another potato recipe in the works that wouldn’t have been so South-Of-The-Border inspired (but hey, maybe I’m just REALLY prepared for Cinco De Mayo)…

…Buuuut right before I went to bed last night, I realized that I had an idea to make that recipe even better, and that schedules are lame, and I should just mess mine up for the eightieth time this week. Planning ahead just does. not. work out for me. 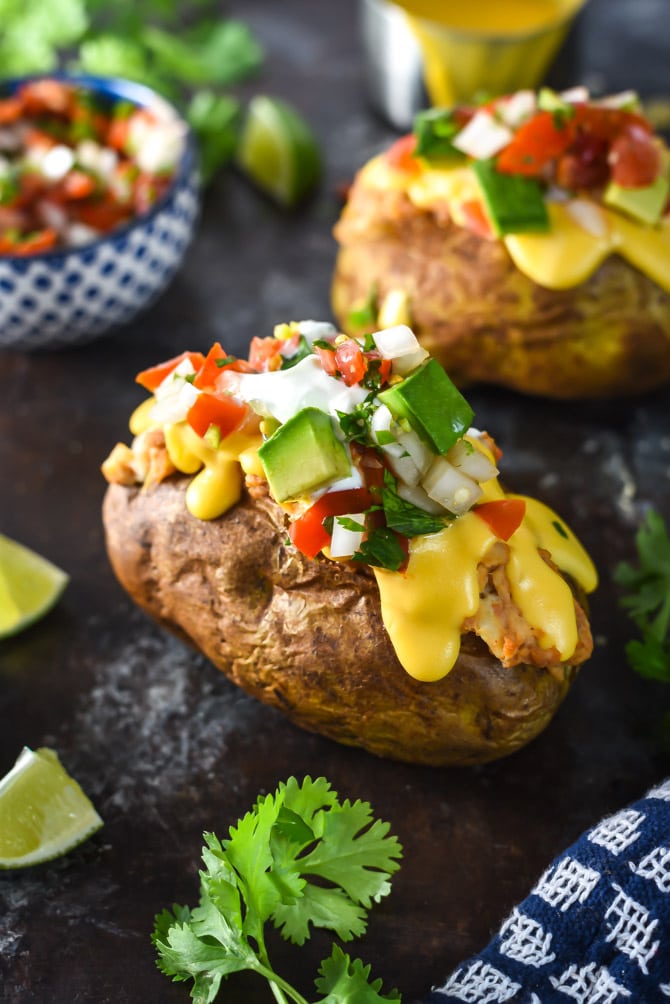 Luckily, I had these Nacho Baked Potatoes in my back pocket (of course not literally) and I realized I could share them with you today instead. So okay, I won’t say, “Eat these for St. Paddy’s Day,” but I will say, “Is there ever a bad time for Nacho Baked Potatoes, loaded up with all of your favorite toppings?” Because really, ask yourself that.

As someone who has eaten plenty of them, I have to say that the answer is no. There’s never a bad time. 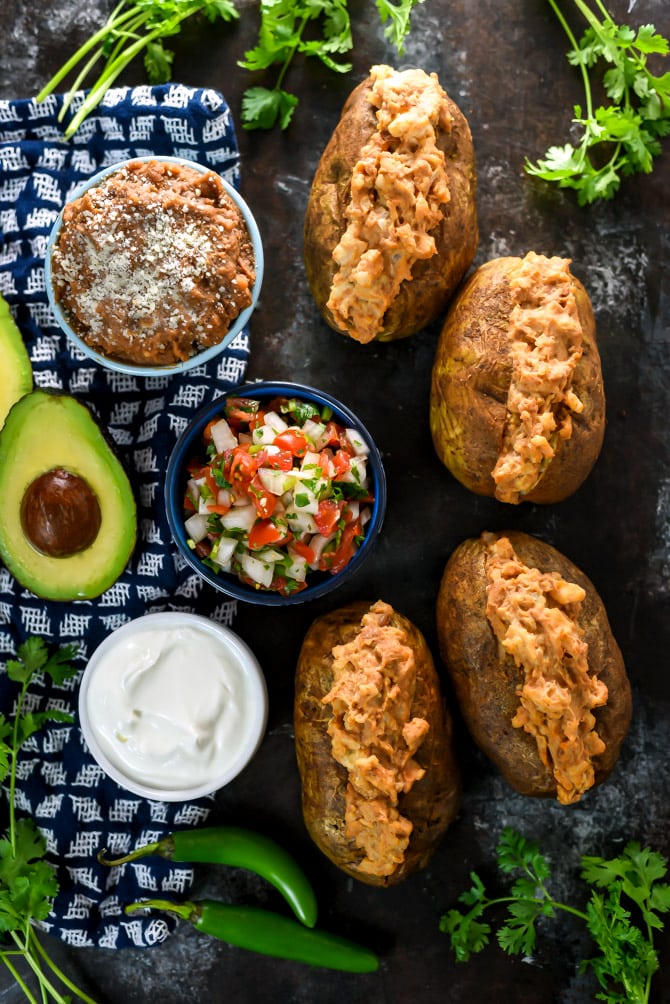 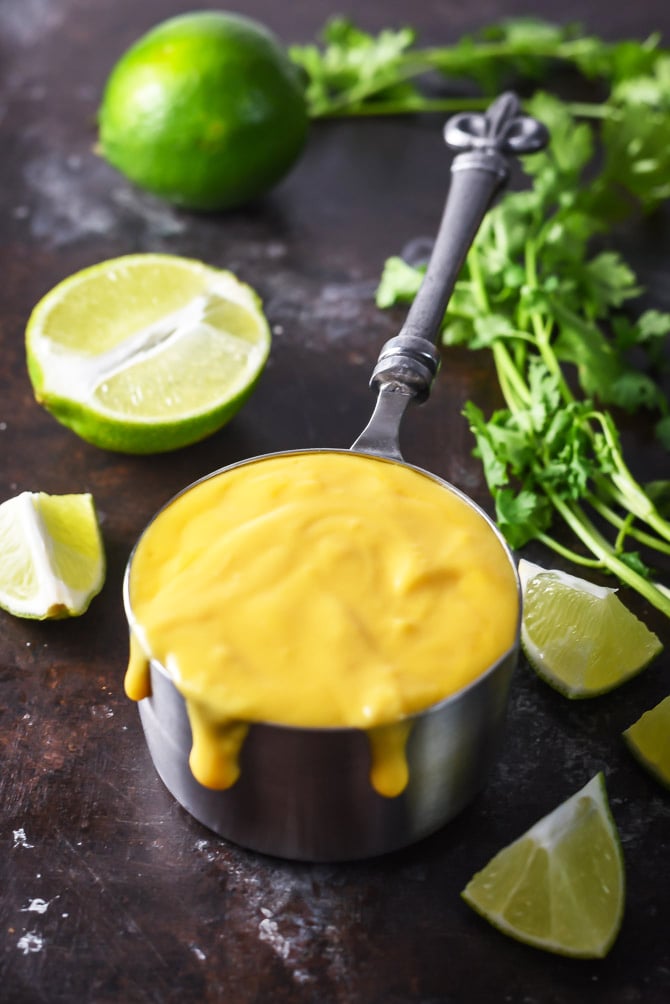 Like I said you can load these up with all of your favorite toppings, so don’t feel tied down by my suggestion of creamy refried beans, queso cheese sauce, pico de gallo, and avocado, although there certainly are worse suggestions to be tied down to. If you’d like, you can nix the beans, add in ground beef, sprinkle over some jalapenos, and so on; Consider the baked potato your blank canvas, and go on and get Picasso-y with it.

The queso cheese sauce, though, is pretty much non-negotiable. I mean sure you could replace it, but why? It only takes 3 ingredients and a few minutes to make and it is SO GOOD. 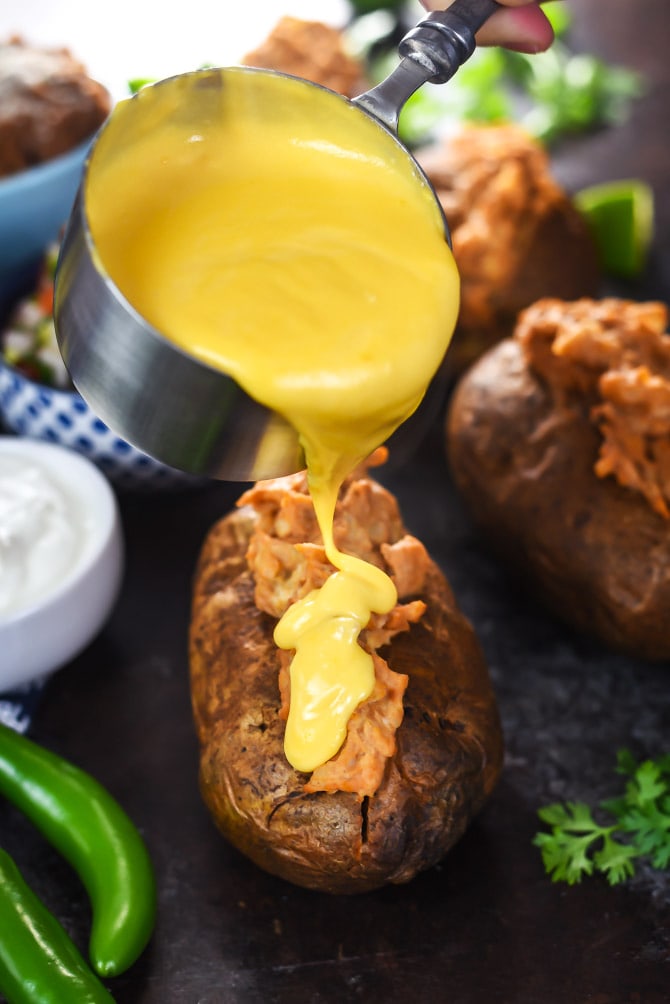 One thing I love about using baked potatoes rather than a big tray of nachos is that each person gets their own separate potato which they can customize with their own fillings. It’s great if you have picky kids, or if you just so happen to live with two picky adults like I do. Not to mention, while tortilla chips are great, there’s just something wonderful about a hearty, crisp-skinned, warm baked potato that takes the meal weekend snack to weekday dinner. Or, you know, right on back to weekend snack. I think you could get away with eating Nacho Baked Potatoes for either. Remember, we decided that there’s never a bad time. 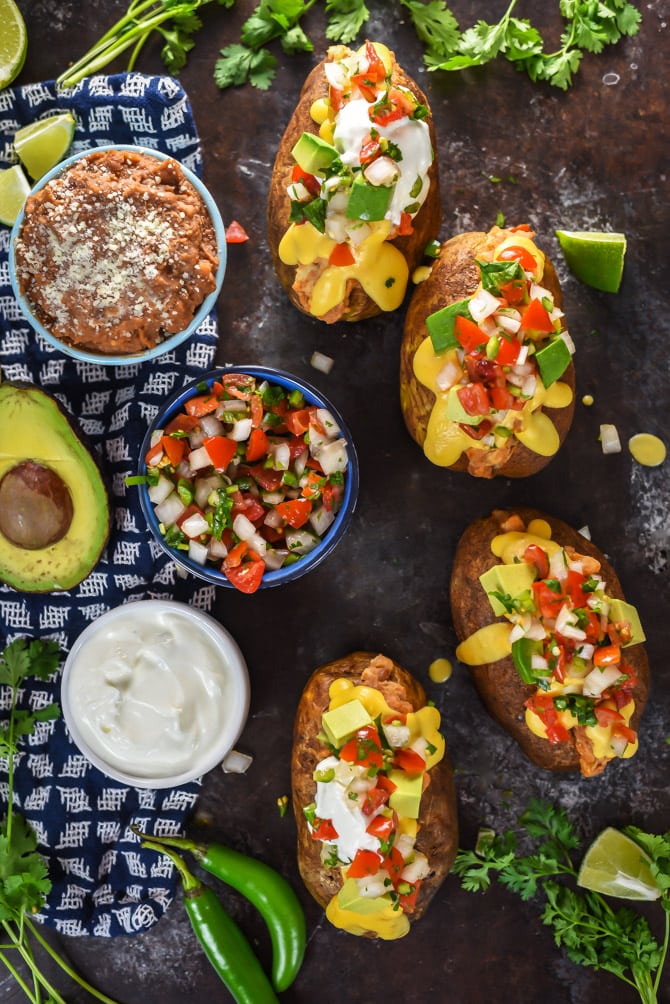 The best time, though, is definitely ASAP.

To make homemade cheese sauce, toss 8 ounces of shredded cheddar cheese with a tablespoon of cornstarch, then add it to a saucepan with 1 cup of evaporated milk and a splash of hot sauce, if desired. Cook on low and stir until completely melted and smooth. (Cheese Sauce recipe from Serious Eats.)