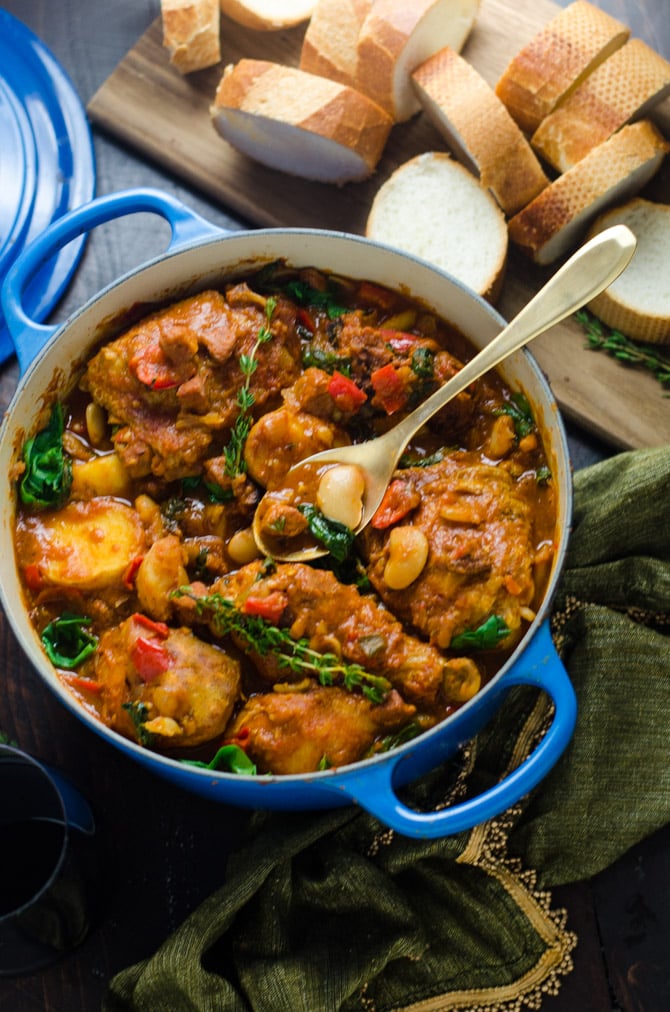 On second thought, I’m totally lying. It’s the sauce, hands down, no contest. I’m in love with it, I want to float in a pool of it atop a raft of pan rustico, etcetera. But I certainly don’t mind the praise, either.

Play your cards right and you can have both. And by play your cards right, I mean scroll down, follow that recipe, and cook up this seriously mouthwatering, flavor-packed, one-pot, Spanish-spiced dish. Then reap all of the benefits. 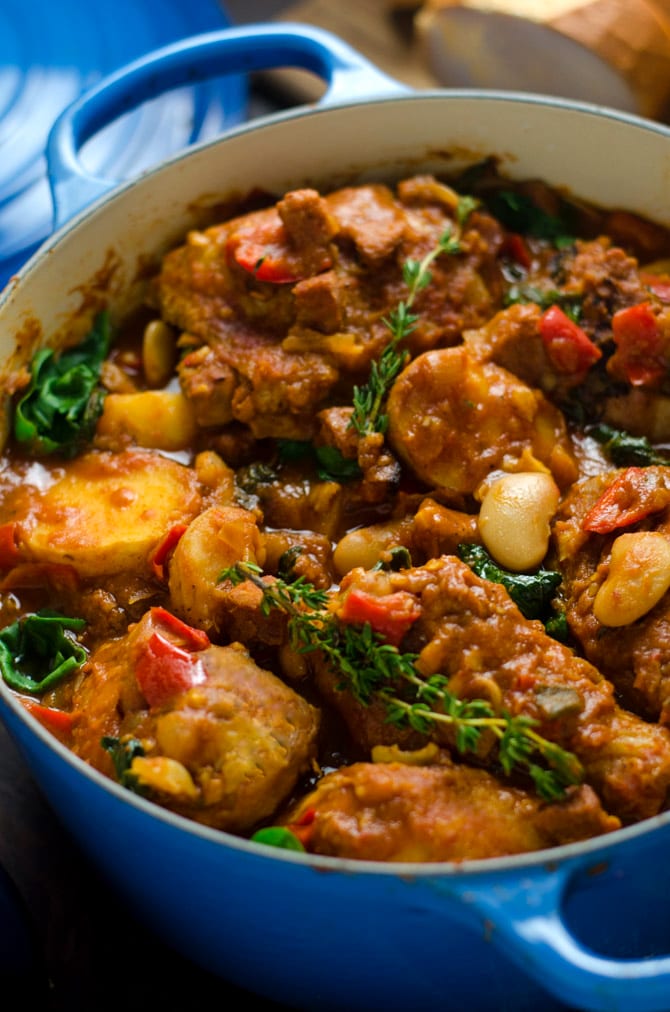 The ingredients in this sauce — specifically, the garlic, onion, herbs, and crushed tomatoes — might lead you to think that this recipe has Italian roots. However, what a lot of people don’t realize is that tomato sauce isn’t really a Italian original. In fact, tomatoes didn’t even exist in Italy until they were brought to Europe by the Spaniards in the 1500s, and for quite a while Spaniards were the only Europeans who would eat them because the rest believed that tomatoes were poisonous.

According to Smithsonian Magazine, the tomato was nicknamed the “poisonous apple” because Aristocrats who ate them were getting sick, and in many cases, even dying. The real issue wasn’t the tomato, of course. The issue was the pewter plates on which the rich Europeans cut their tomatoes. Often, those pewter plates would have a high lead content, and the acidity of the juices would cause lead to leach from the plates onto the fruits. This resulted in many terminal cases of lead poisoning, for which the tomato took all of the blame. Well, at least for a couple of centuries, it did.

Tomato sauce did eventually find its way to Italy, though, under the name Salsa di Pomadoro, alla Spagnuolo. That’s “tomato sauce, Spanish-style”. The Spanish-style tomato sauce wasn’t served with spaghetti, though. Instead, it was commonly served over meat, vegetables, and potatoes, as it still is in Spain.

(Tomato sauce on pasta didn’t become a thing until about 100 years later, and that was definitely an Italian creation.) 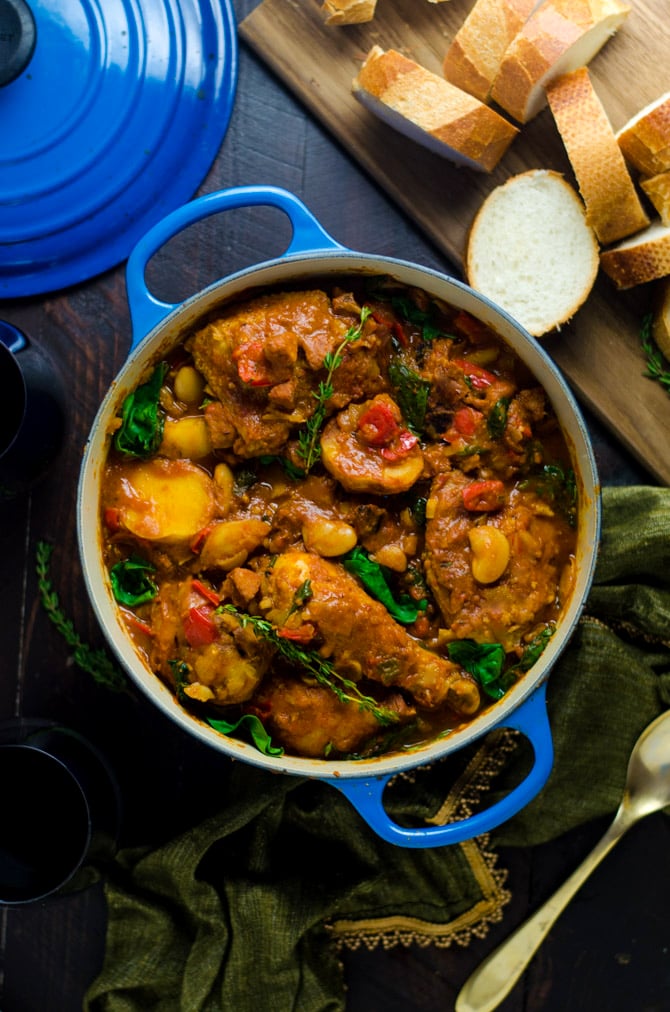 You might have noticed that the sauce in these photos doesn’t look like typical tomato sauce, despite sharing so many ingredients. Well, that’s because it’s got a couple more tricks up its sleeve. Drippings and spice from Spanish chorizo, juices from tender chicken thighs and drumsticks, and additional chicken broth make the otherwise run-of-the-mill tomato sauce into a tomato-based gravy sauce that is just as comforting as it sounds.

PS. Just because it’s miraculously been 80°F and sunny for the past couple of days here in New Jersey, doesn’t mean that comfort food weather isn’t on the horizon. When it hits, you’re going to want to have this recipe handy. ❄️ 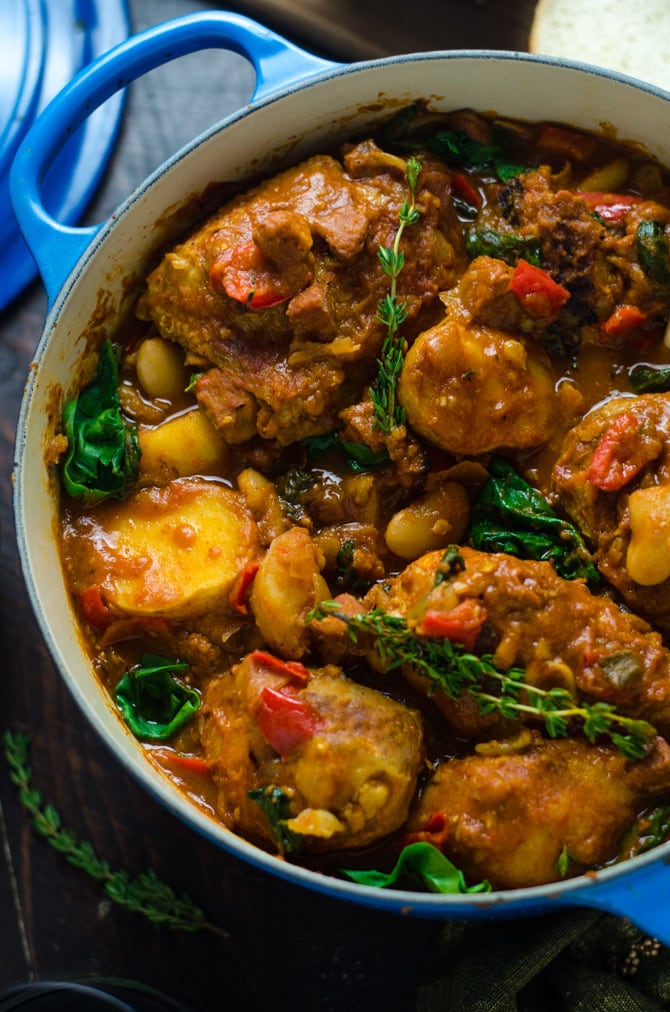 So, I’ve spoken a lot about the sauce (for good reason), but there are so many more things worth mentioning about this Saucy Spanish Chicken, Chorizo, and Potato Pot. Like, for example, how ridiculously amazing the chicken is. I almost called this recipe “Butter-Soft Spanish Chicken” because those chicken thighs and drumsticks wind up so tender that they practically melt in your mouth.

Speaking of butter soft, can I tell you that the halved mini yukon gold potatoes aren’t just thrown in there to fill you up– they are actually creamy little morsels of pure joy? Too late, I did anyway. Seriously though, this may be one of my favorite preparations of potatoes of all time, and they aren’t even crispy or fried or even the main ingredient, and therefore I am currently reevaluating everything I thought I knew about my potato preferences.

Or is it just that they are once again another vehicle for that delicious sauce? That very well may be it. 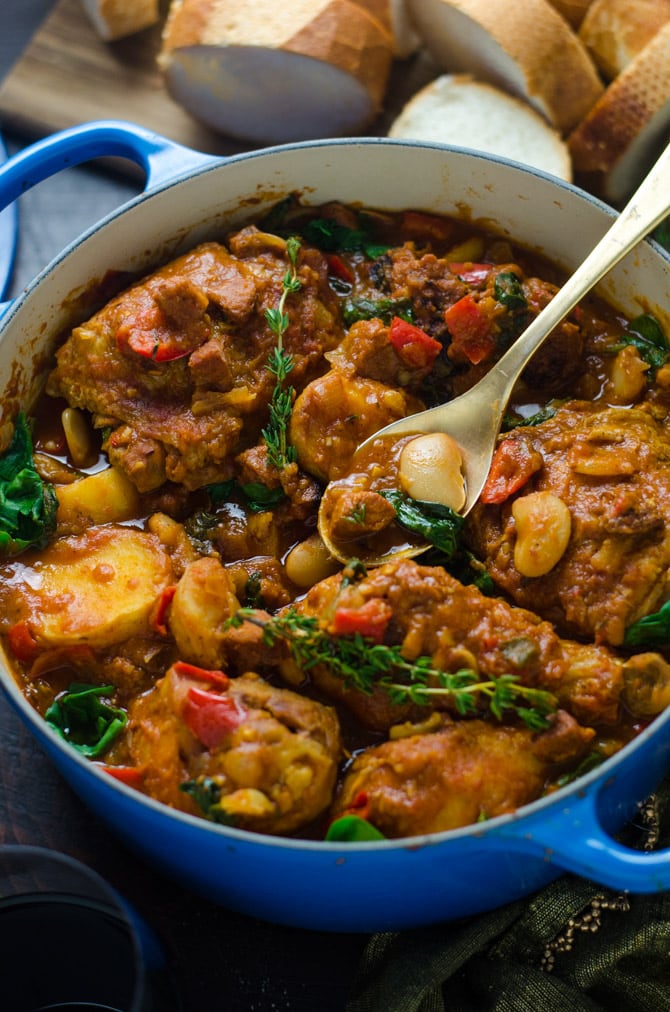 Wait, I have one last “buttery” comment. Butter beans. Have you had them before? They’re creamy, starchy, packed with protein and fiber, and they’re a part of this recipe that you don’t want to skip. Technically, they’re lima beans, but not like the green ones we pushed away as kids. You want to use the mature, large, cream-colored beans here, and you’ll eat up every one of them. If you have a hard time finding them at first, make sure you check the Goya section (which is usually in the International aisle of the grocery store). They’re worth seeking out. Plus, won’t you feel great when you get to say that you got your boyfriend / husband / kids / picky friend / self to eat lima beans? I think future-you already deserves a pat on the back for it, honestly.

No one has to know that they soaked up all of the flavor from the Spanish chorizo and that’s how you won everyone over. Go ahead and claim it’s your crazy cooking super-powers. In reality, it kind of is, right?

Spanish chorizo, by the way, is not the same thing as Mexican chorizo, so don’t make the mistake of confusing the two. Mexican chorizo is often sold raw and needs to be cooked before serving, like Italian sausage. Spanish chorizo, on the other hand, is sold dried, cured, and ready-to-eat. You can find it in sticks, kind of like pepperoni, usually in the same sections as other cured sausages.

I’ve talked about protein and starches plenty, but what about veggies? Don’t worry, there’s bell pepper, onion, and spinach in the Saucy Spanish Chicken, Chorizo, and Potato Pot, too, so it’s really a full meal just waiting to be enjoyed. And I’m going to finally stop rambling now so that you can do exactly that.

Just don’t forget to post a photo on Instagram with the tag #hostthetoast when you do, okay? If you do, it’ll show up on the You Made It page, and I love to show off all of the awesome photos you guys take!