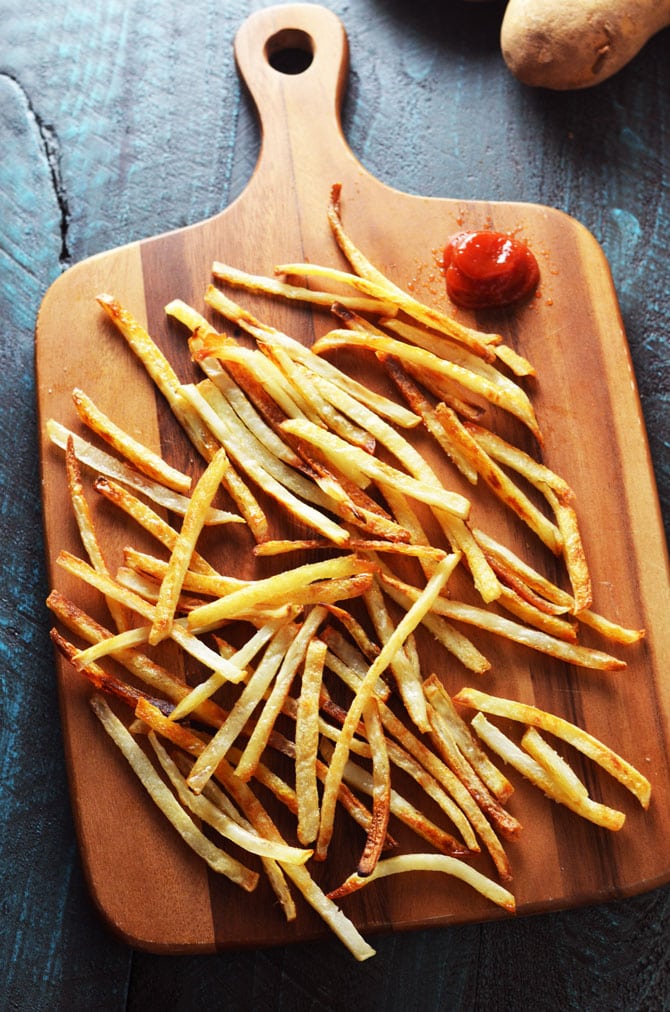 “Oh no, I haven’t had fries since 2008,” my friend Justine said, waving her hand to block the golden-fried slice of spud that I offered her at a going away party over the summer.

My brain exploded. Seven years without fries? Was this some sort of biblical curse? Maybe a kind of self-torture? The term “cruel and unusual punishment” comes to mind when I think of fry-less years. YEARS.

“Justine used to have a problem,” my cousin Ashley, Justine’s childhood friend and college roommate, jumped in to explain. She had a problem. Ashley paused and smiled at me, checking my reaction. I gestured for her to continue. 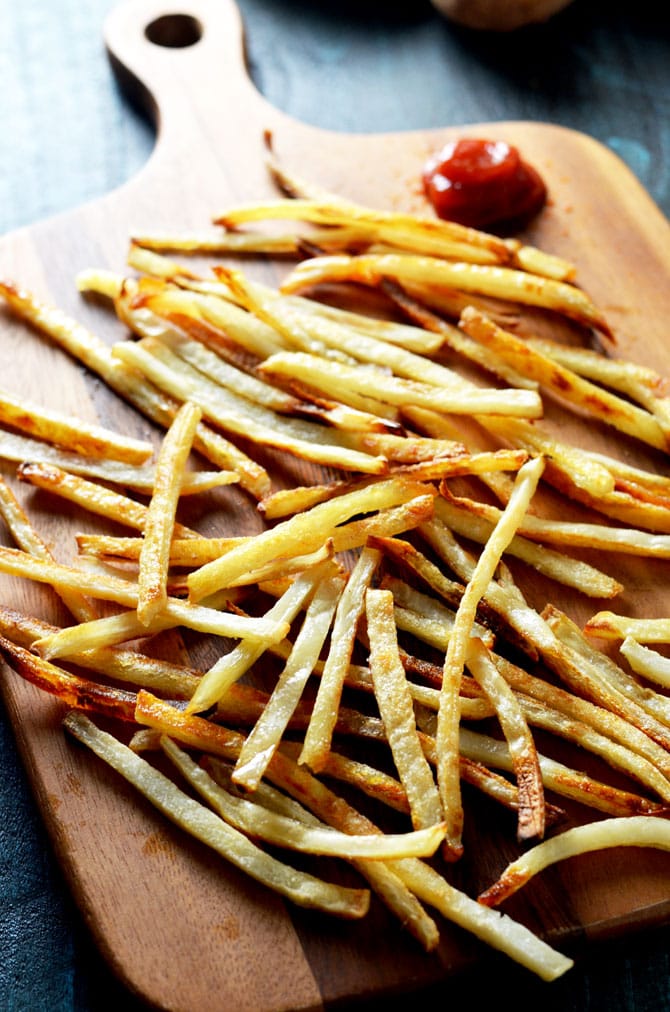 “Justine… ate a lot of fries.”

“Justine ate fries EVERY. SINGLE. DAY. She was addicted to french fries. Somehow I convinced her to give them up for Lent. But after Lent ended, she realize that her obsession with fries was actually a problem and would eventually affect her health. So she knew she could never eat a fry again or she would become obsessed again. No fry has been touched since. Not one.”

I’m not exaggerating here. These are the exact words that were spoken to me. I felt like it was the big reveal in a M. Night Shyamalan thriller. You see dead people? Water kills the aliens? Justine doesn’t eat french fries? Mind blown. 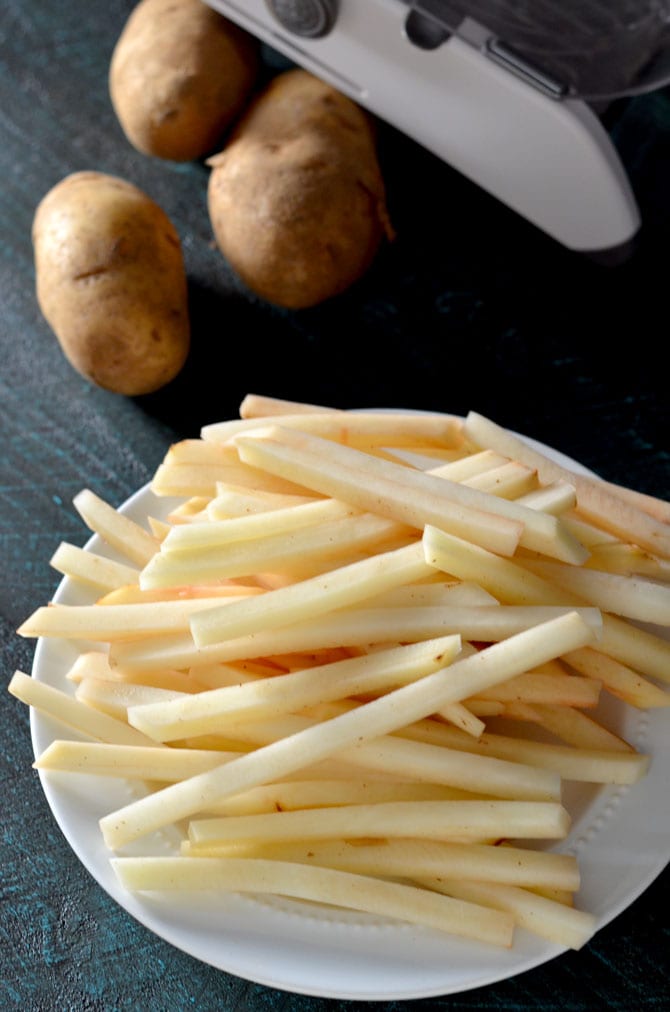 Anyway, that got me thinking that I should majorly dial down my own french fry consumption. Eating anything deep-fried too often could definitely have a negative effect on your health. And then I decided, forget that. I love french fries. I’ll just make a healthier version.

So I made baked ones. Baked French Fries that were crispy on the outside, fluffy on the inside, not gummy or tough or falling apart. And honestly, I wouldn’t advise Justine to go anywhere near them because they’re just as addictive as the real thing. Proceed with caution, because today I’m sharing the recipe with you. 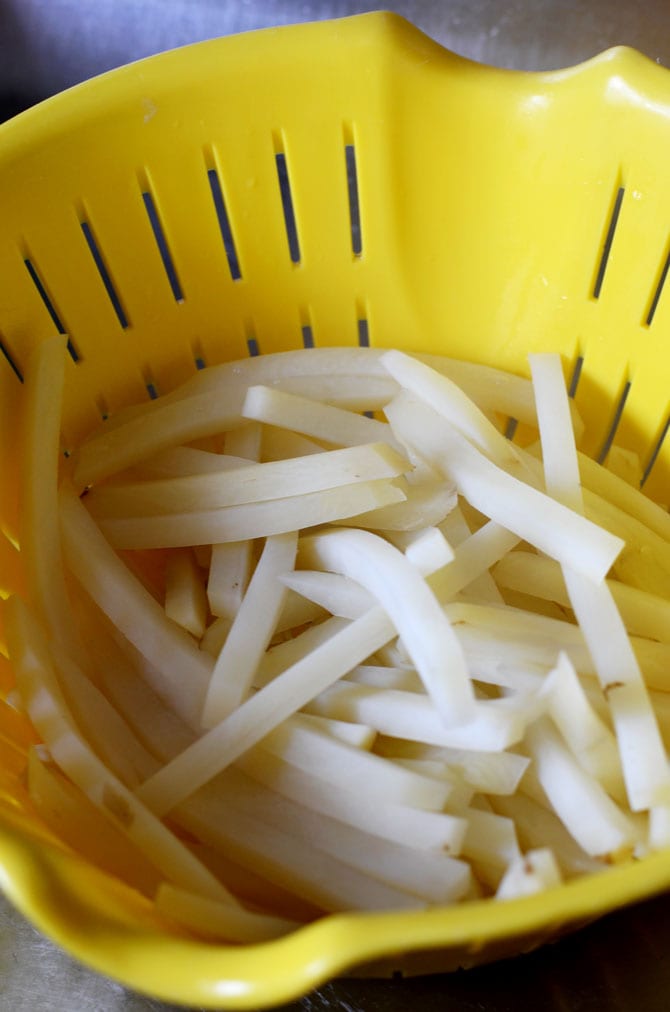 A problem I often ran into when I first tried to bake french fries was that I couldn’t get the interior to bake through before the outside burned. It wasn’t long before I realized that boiling the potatoes first would ensure that they were cooked through, but even then the result wasn’t desirable– the potatoes were usually mushy and breaking apart due to the starches breaking down too much during the cooking process. The solution was a tablespoon of vinegar in the boiling water, a technique that I learned from J. Kenji Lopez-Alt of Serious Eats. The vinegar, he explains, creates an acidic environment that makes the pectin in potatoes break down much more slowly and prevents them from overcooking. After boiling the cut potato pieces in the water with a bit of vinegar, they’re perfectly intact but cooked through. No gummy, mushy, or undercooked fries for us! 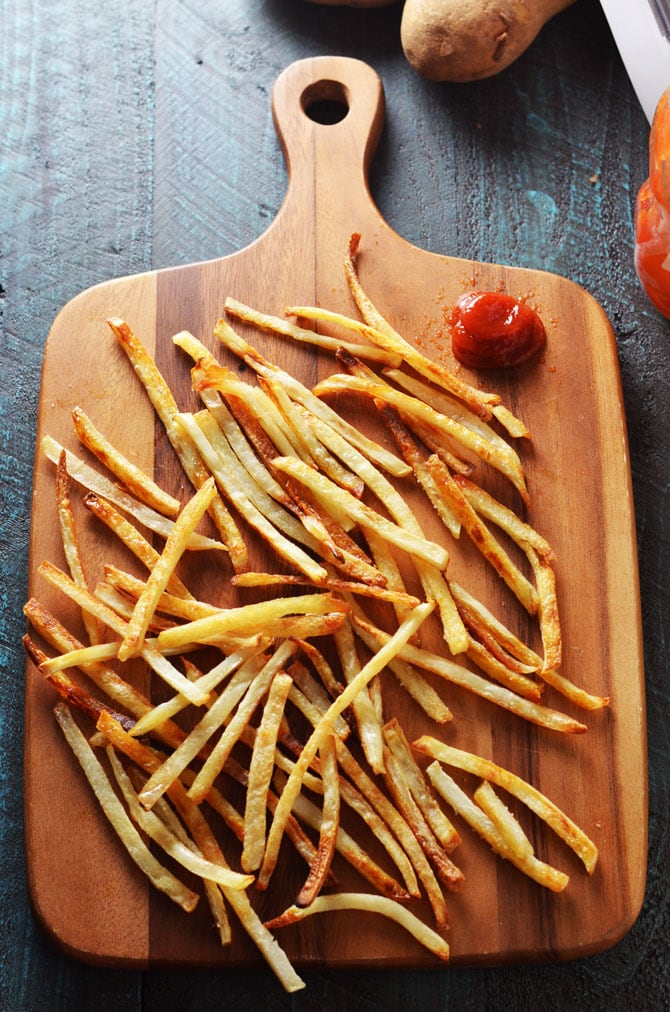 But they certainly aren’t ready to eat yet, they’ve got to be baked to get those crispy exteriors. Some people suggest that you should toss the potato pieces in oil and then bake them, but I found that this caused the potatoes to absorb more of the oil and take longer to bake rather than get that crisp exterior with the itty bitty bubbles that make french fries irresistible. Instead of tossing them in cold oil, I drizzle a few tablespoons of oil onto a rimmed baking sheet and place it in the oven to heat up before adding the potatoes. Once the oven comes to temperature, the oil will also be hot, and adding the potato slices results in some glorious-sounding sizzling. That sizzling is the exterior of the potato gently frying in the oil– but it uses far, far less oil than if you were deep frying, and it doesn’t give that painful splash-back of burning drops from frying on the stove top.

All you need to do in the end is sprinkle them with salt and it’s time to chow down on thin, crisp fries that you don’t have to feel ultra-guilty about. Serve them with Baked Chicken Nuggets with Honey Mustard Dip for the ultimate healthified, deep-fry-free, fast-food-from-home meal! 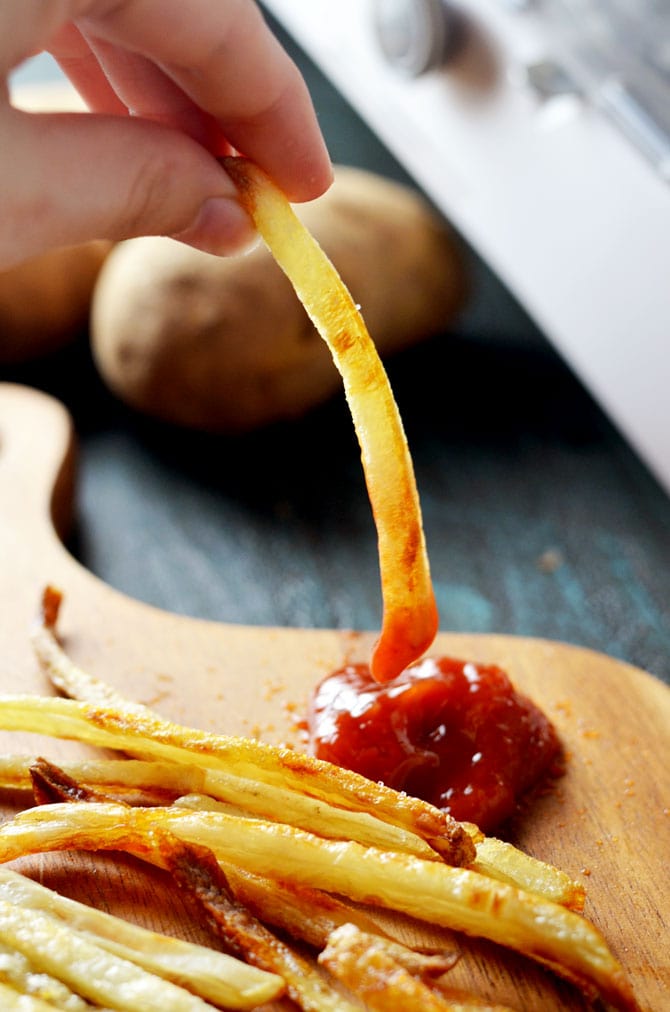 When you try these Baked French Fries, be sure to take a photo and tag #hostthetoast on Instagram or Twitter! Can’t wait to see ’em!