These Garlic & Herb Marinated Chicken Spiedies aren’t just your run-of-the-mill chicken skewers– they’re a Central NY specialty that deserves some worldwide recognition. Chunks of chicken breast are marinated for at least 12 hours in a tangy, herb-spiked marinade and then grilled before being served on soft Italian bread with a generous drizzle of garlic sauce. 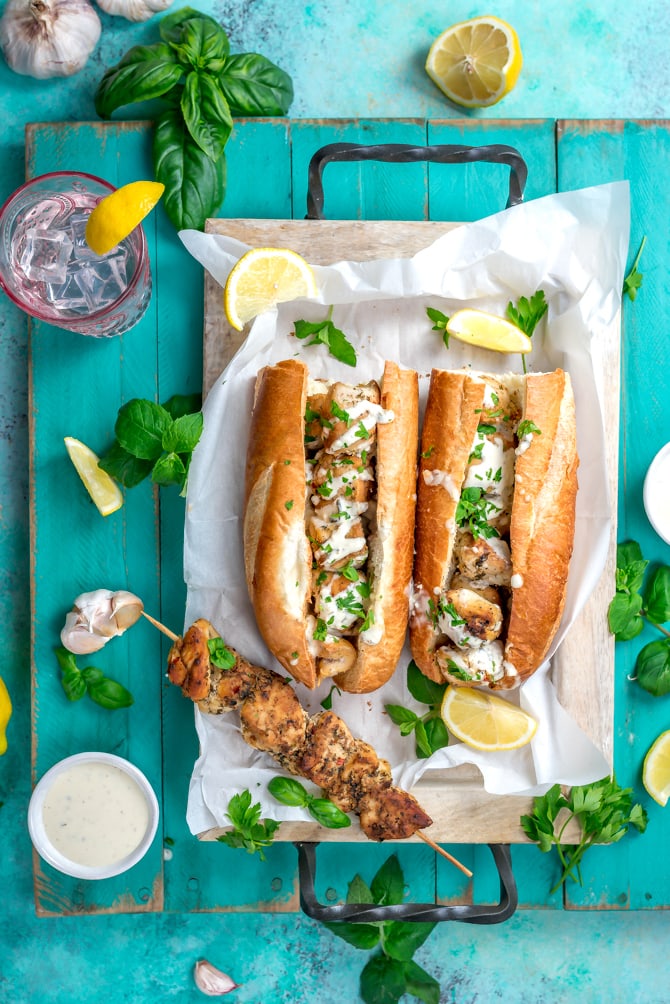 Cheesesteaks, deep dish pizza, clam chowder. There are some dishes so deeply rooted in a region’s food scene that they become a gastronomical attraction. The kind of dish that inspires locals to fiercely defend their favorites, and sends tourists home raving and scrambling to find some version, any version, of the dish back home.

Unfortunately for spiedies– the most beloved sandwich in Binghamton– upstate New York doesn’t see quite as many tourists as, say, Manhattan or Chicago.  As a result, spiedies have managed to remain mostly undiscovered outside of their Central NY birthplace. If it wasn’t for the fact that my cousins grew up around there, I’m sure I would have never heard of them. 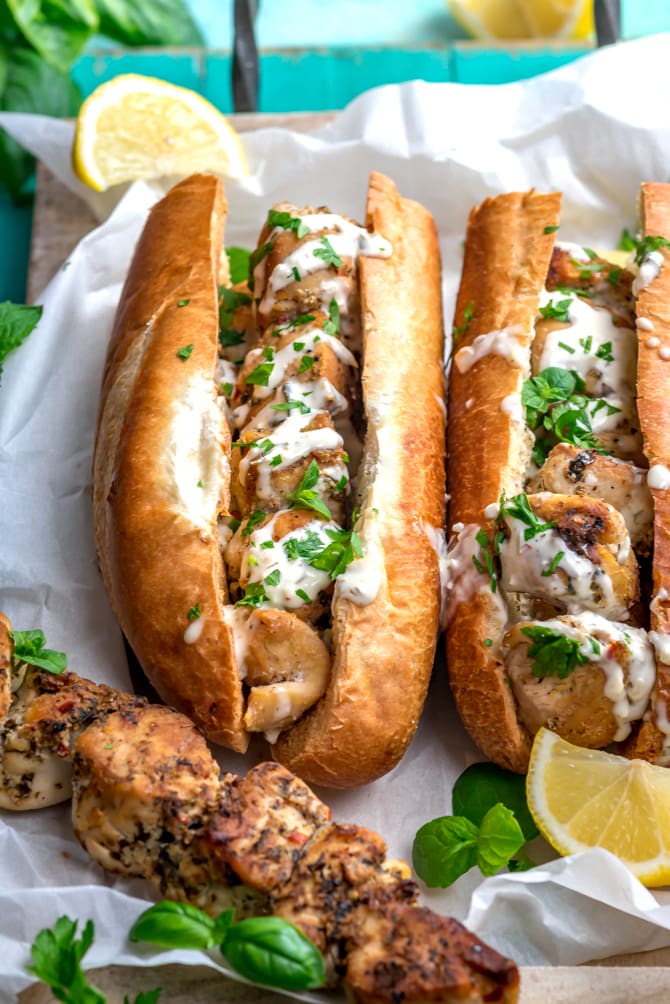 SO WHAT IS A CHICKEN SPIEDIE?

So glad you asked. Pronounced like “speedy,” this simple sandwich is made of caramelized, cubed meat wrapped in an open slice of Italian bread or stuffed into a long roll.

There are four “approved” meats you can pile on top: chicken, pork, beef, or lamb. While lamb is the OG, spiedie-lovers have spoken and crowned chicken the true fan favorite.

Whatever meat you choose, it goes into a zesty marinade that tastes a little like Italian dressing. After a long and mysterious marinating process, the meat finally hits the grill, quickly caramelizing quickly on the outside while staying super-tender on the inside.

Now you can order said sauce shipped to you from Amazon, courtesy of the area’s favorite purveyors. As marinades sauces go, even food editors will concede that these are among the best you can get. But this simple and flexible marinade of oil, vinegar, and spices is worth the minimal effort you’ll put in, and will yield the most tender and flavorful meat you’ve ever slapped on a sandwich. Fresh herbs and garlic really do make a difference.

Spiedies are traditionally served with just a drizzle of reserved marinade or a squeeze of garlic sauce (which is also made with the marinade ingredients), and no ketchup or mustard or anything of the sort to distract from all of that tangy, grill-marked meat. If you must add veggies it’s allowable, but absolutely no cheese, ever, under any circumstances. (We’ll find you.) 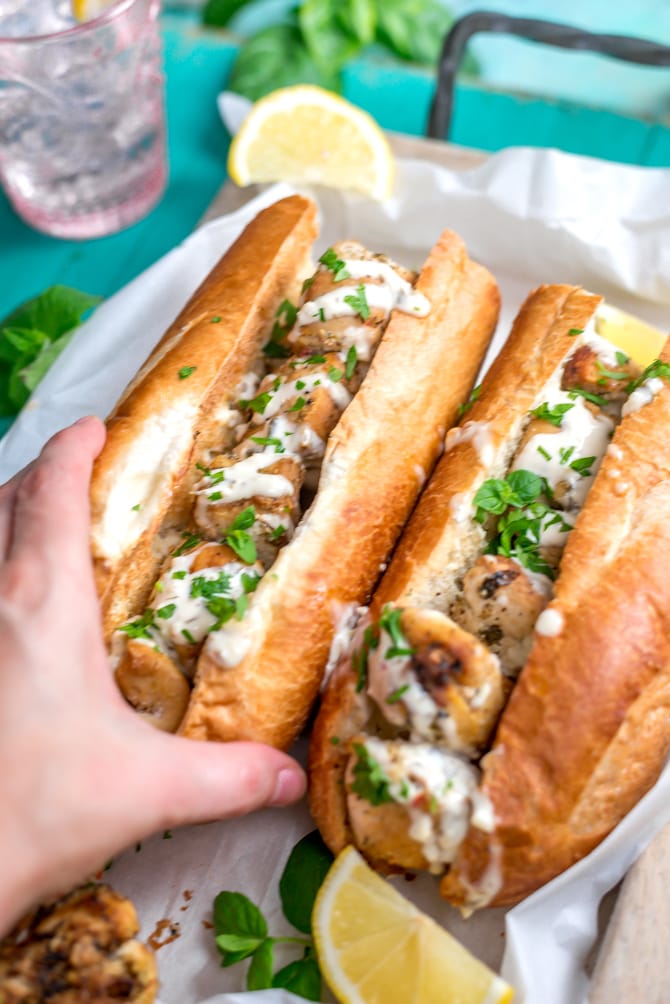 THE HISTORY OF SPIEDIES

Spiedies’ history, like their recipe, is pretty modest. Located southeast of the Finger Lakes and slightly north of Pennsylvania, modern-day Binghamton is well known for its BBQ pits.

But in the 1920s, the area was only beginning to welcome the surge of Italian immigrants who would change the region’s food scene for good. A humble dish prepared in Italian home kitchens, spiedies flew under the radar for a good 15-20 years until 1939 when a restaurateur named Augustine Iacovelli introduced them in his restaurant, Augies. His original “zuzu” sauce of wine vinegar, lemon juice, garlic and mint quickly became the go-to lunch for railroad workers and shoemakers who spread the news to their own families and friends.

But that’s about all anyone can agree on. The true origin of the spiedie is widely disputed, an urban food legend that it’s best not to bring up unless you’ve got some time on your hands.

Regardless of their history, today you’ll find spiedies everywhere in the area from restaurants to street vendors, to supermarkets. But arguably the most popular spot to sample one is at Lupo’s S & S Char Pit. Almost 70 years since the dish was invented, the Lupo’s family business sells thousands of pounds of spiedies a week and bottles their popular sauce for fans to enjoy at home.

Such is the love for spiedies that there are road trip maps, food tours, and even a Spiedie Fest and Balloon Rally held each August. Celebrating its 35th year, the festival draws a crowd of 100,000 visitors for 3 waistband-stretching days of spiedie-eating and competitive cookoffs. If you’re still questioning the combination of sandwiches and hot air balloons, don’t bother. Just embrace it, two-handed, napkin in lap. 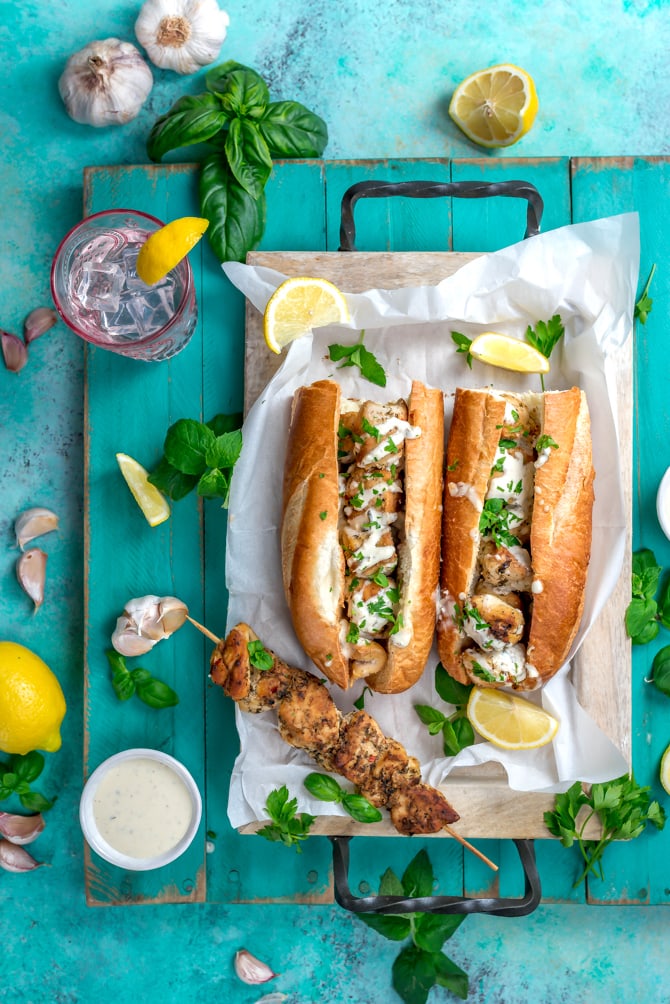 Chicken spiedies are breaking all the rules. (Except the one about “no cheese”. Don’t make me tell you again.)

See, usually, chicken shouldn’t be left in an acidic marinade for more than 5 hours or so, or you risk it becoming mushy. But chicken spiedies are the exception, not the rule. They are marinated for at least 12 hours and can hang out for up to five days in the fridge absorbing flavor.

The upside of the long marinating time is that you’ve got plenty of leeway to start them in advance, or to delay cooking them if you need to.

To avoid wasting any unnecessary time, I like to make more marinade than needed and freeze it in ice cube trays for later. Simply transfer the cubes to a freezer bag, and use as needed. As a rule of thumb, I use one ice cube per 2 ounces of meat.

Skewer sandwiches don’t take themselves seriously, so neither should you.

Go nuts and make your spiedie your own! Just whatever you do, remember… don’t add cheese. 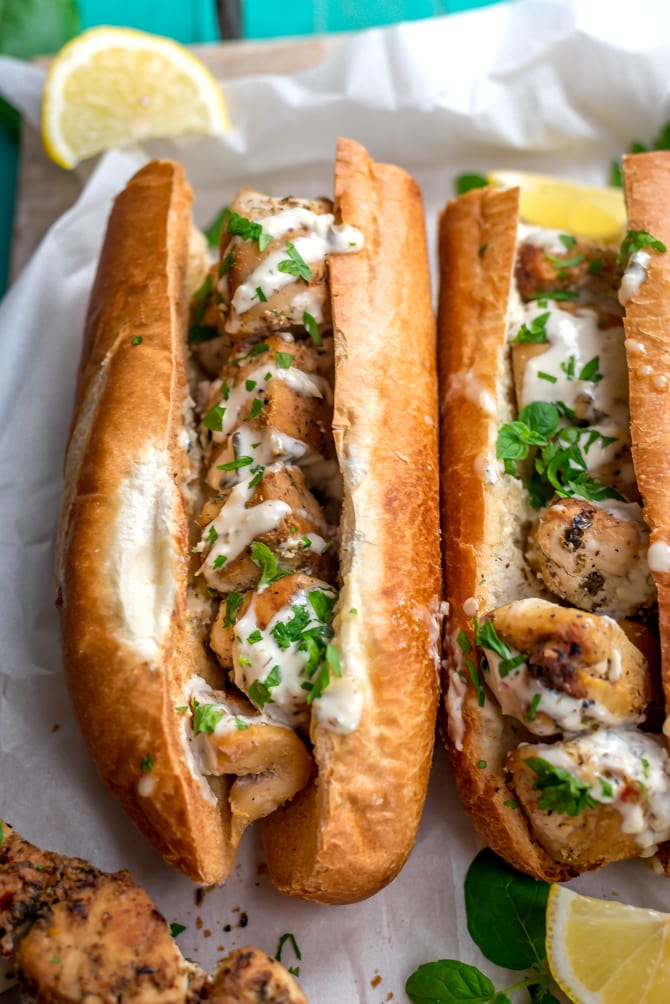 When ready to use, add 1 marinade cube per 2 ounces of meat to a freezer bag. Be sure to toss occasionally to ensure that the marinade coats the meat as it thaws.
If using bamboo skewers, be sure to soak the skewers for at least 30 minutes before threading the meat on and grilling.