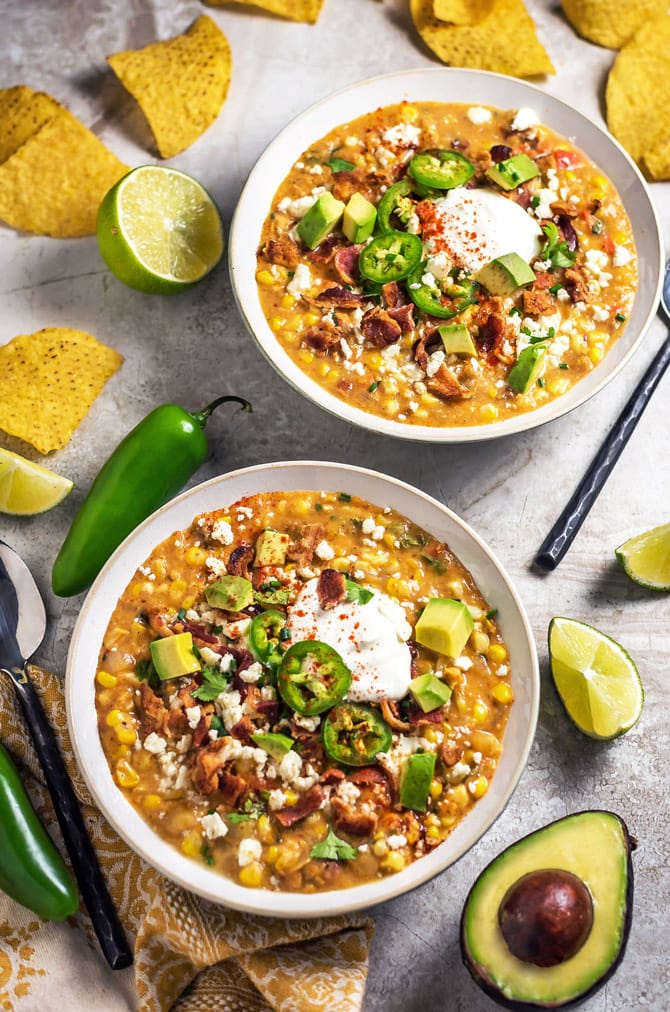 Usually when it’s hot out I beat the heat with freshly squeezed lemonade, or a dip into a cold pool, or a big cone full of ice cream.

But my favorite way to do it is with Slow Cooker Mexican Street Corn Chowder.

Back before I worked from home, I’d sometimes run to the convenience store to grab a quick bite on my lunch breaks when I forgot (or was too lazy) to pack lunch. And then I’d usually eat in my car… which had no air conditioning… in the middle of the summer… because it was the only way I wouldn’t just hop right back on the computer and start working while I ate. We have to force ourselves to take a break once in a while, even if it involves sitting in a extremely hot car with black leather seats, you know? 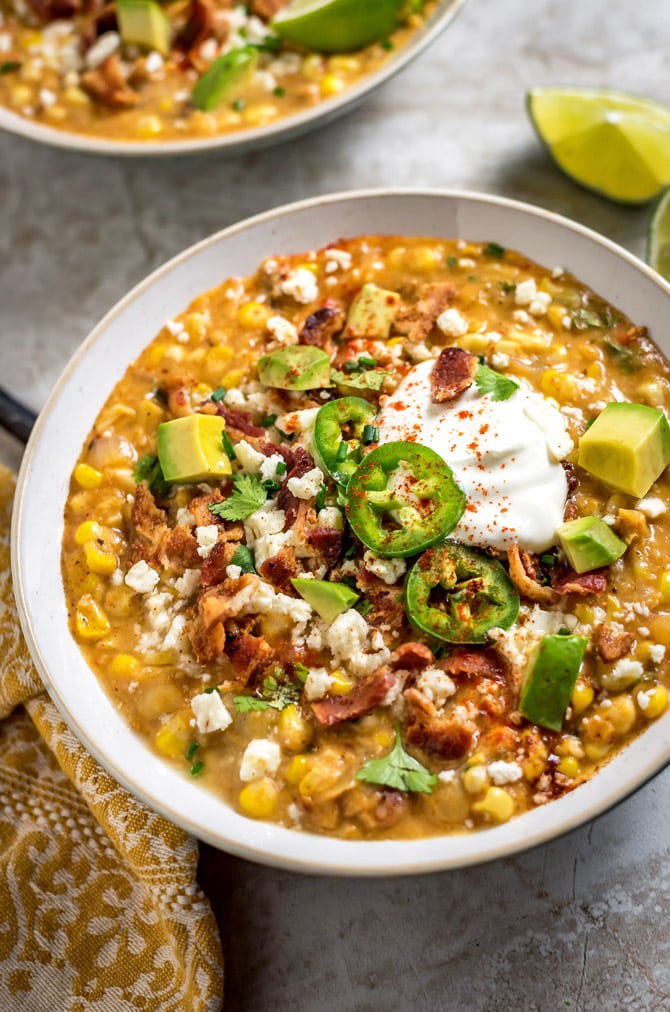 The thing that made it all really crazy, though, was the fact that my number one meal (even in the summer) was corn chowder. To recap: hot day + hot weather + hot soup. Whaaaat was I thinking?

I’m going to be honest, I didn’t know there was science behind it at the time; I just love corn chowder enough that I was willing to ignore all of the parts of my brain that were saying “no soup in the summer, you nut!” But as it turns out, corn chowder in the summer might just cool you down more than any cold treat ever could. 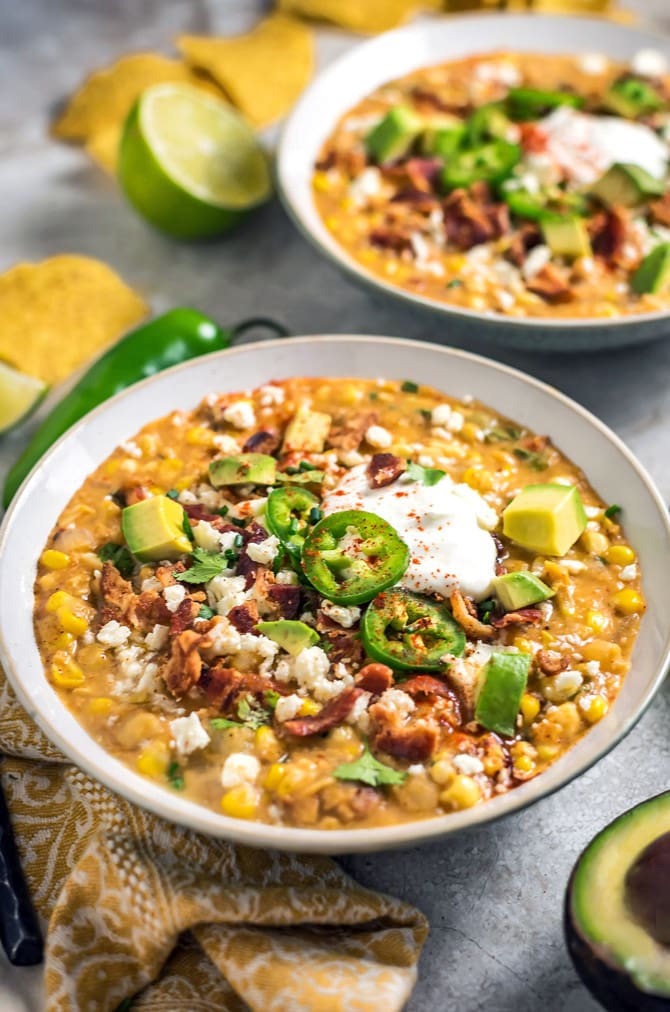 Apparently, when you eat hot food, your body notices, and it sends signals to your brain to cool you down. It might make you sweat a bit (because sweat is your body’s natural AC system), but enjoy a big bowl of steaming soup and you’ll be feeling nice and refreshed when you’re done. Especially if it’s a spicy bowl of soup, since that type of heat also has a similar effect on the body.

That logic inspired this recipe, which combines traditional corn chowder with spicy Mexican-inspired flavors to create what basically became soup-style Mexican street corn. It’s a recipe you’re going to want to make when you’ve got access to all of that fresh, sweet summer corn, or in the winter when you’re craving a bowl of something comforting and creamy. You might even find yourself craving it when you’re stuck sitting in a hot car. I’m telling you, it’s a recipe you’re going to want all the time. 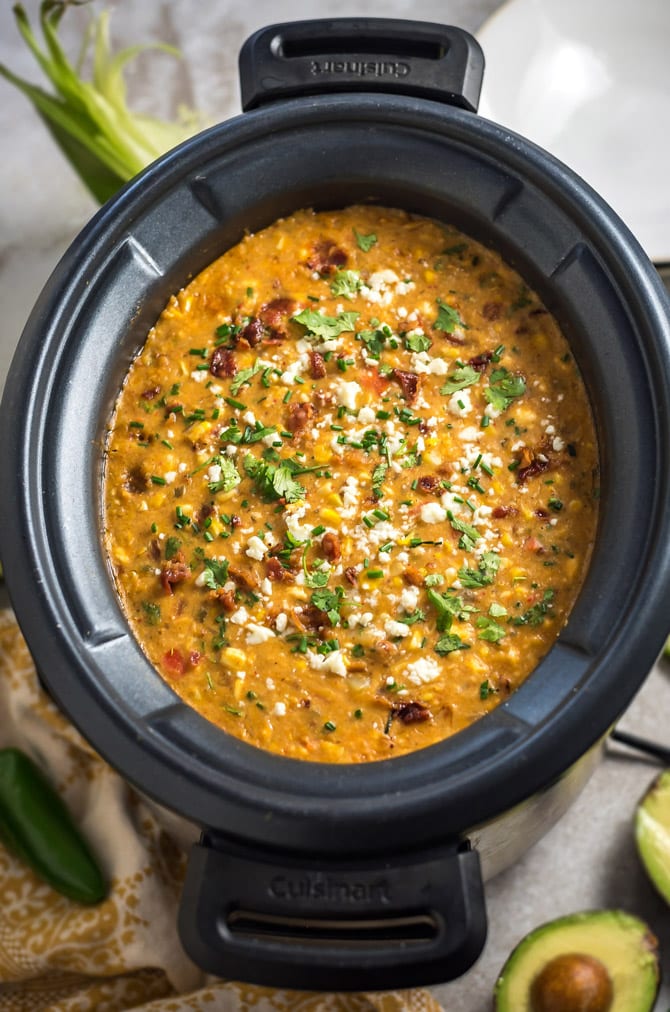 Just like with your typical corn chowder, this recipe includes sweet corn, starchy potatoes, and cream. But the Slow Cooker Mexican Street Corn Chowder also gets a boost of flavor from smoky chipotles, salty bacon, tangy cojita (or feta) cheese, and cilantro (or not, if you don’t like the stuff). And best of all, whether or not you subscribe to the whole “hot foods are good on hot days” idea, at least you don’t have to slave over a hot stove to make this recipe– it all comes together in the slow cooker. 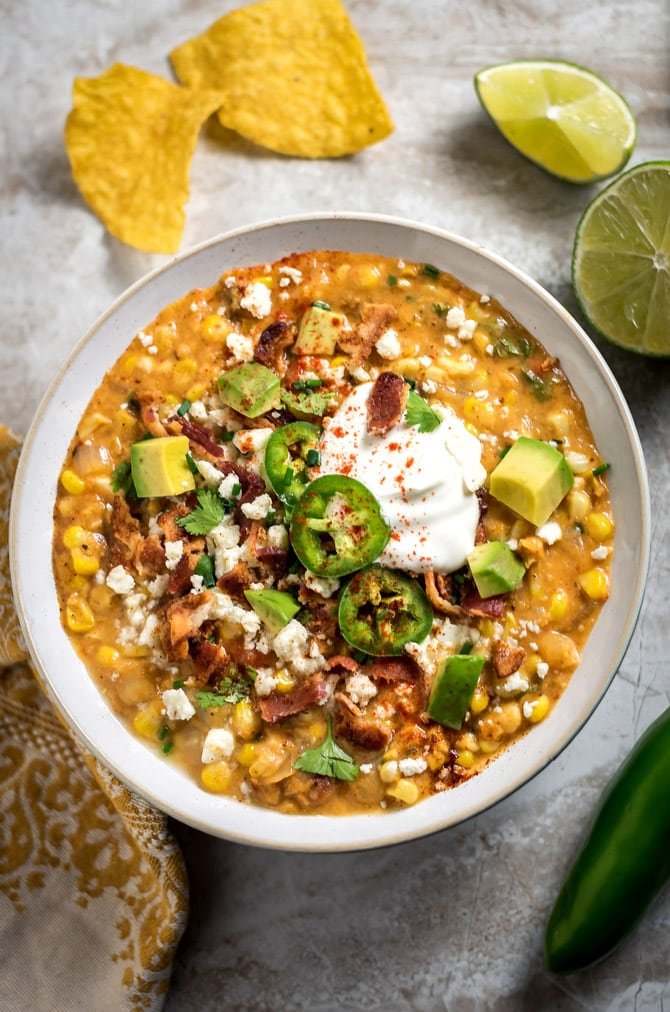 This was far and away my most favorite corn chowder I’ve ever tasted, and I think you’ll feel the same once you try it out. Despite the fact that this recipe makes a lot of soup, we were all upset when it was all gone. Luckily, I’ve got several ears of corn leftover from Sunday’s cookout, and I know exactly what to make with it.

For the Corn Chowder: