These 4-ingredient Syracuse Salt Potatoes are a classic Central NY dish. Thin salt crusts, almost impossibly tender centers, and a drizzle of melted butter make them just as irresistible as they are easy to prepare. 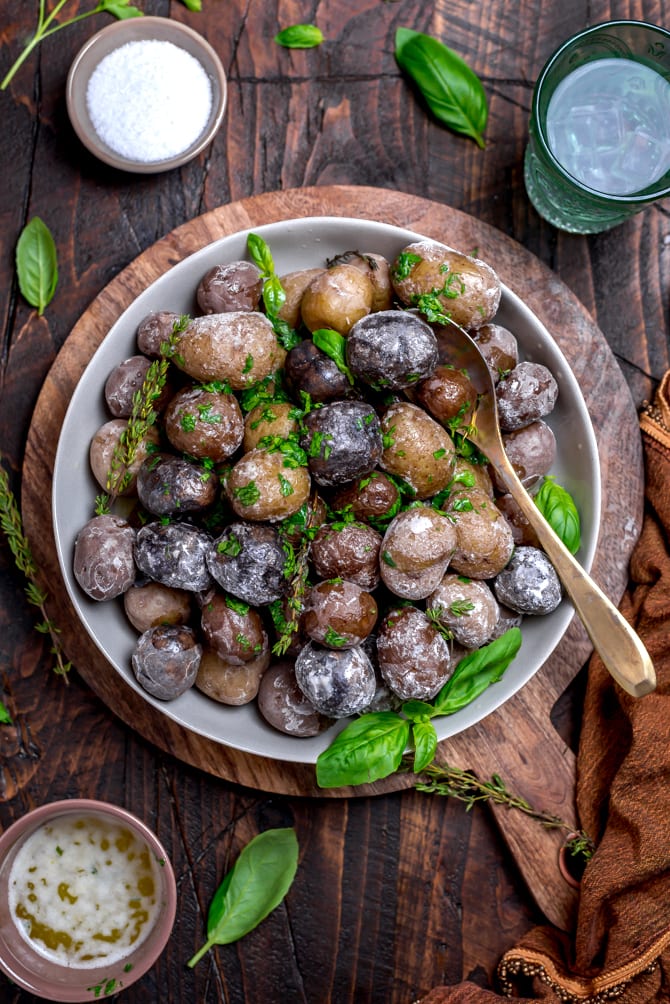 Every year until I was 15, my entire extended family traveled to Syracuse, New York to celebrate my great-grandfather’s birthday. And every year, we had the same traditions– we had dinner at the Clam Bar, we loaded up on half moon cookies to bring home with us (but we always ate all of them before we ever went home because we didn’t want them to get stale), we ordered tomato pie that none of the kids touched because Where was the cheese?, and we dutifully listened to my Grandpa Jim tell us all of the same stories about all of the foods they all ate growing up in that region of New York. But it wasn’t until long after my great-grandfather was gone and the yearly visits to Syracuse stopped that I first tried my favorite of all the Syracuse specialties: Syracuse Salt Potatoes.

I’m a major salt fiend. Always have been. So when I read about Syracuse’s salt-crusted, ridiculously creamy (seriously, I’ll talk about the science behind this in a few), tiny potatoes, drizzled with melted butter and sprinkled with herbs, I of course had to try them.

Getting to the point: I did. I tried them. I ate them. I loved them. I made them again. And here I am sharing the recipe with you, because even though these Syracuse Salt Potatoes were never a traditional food we had growing up, they’re a recipe I’ll be repeating from now on (and sharing with my family this weekend when we have our family reunion– in my neck of the woods this time). 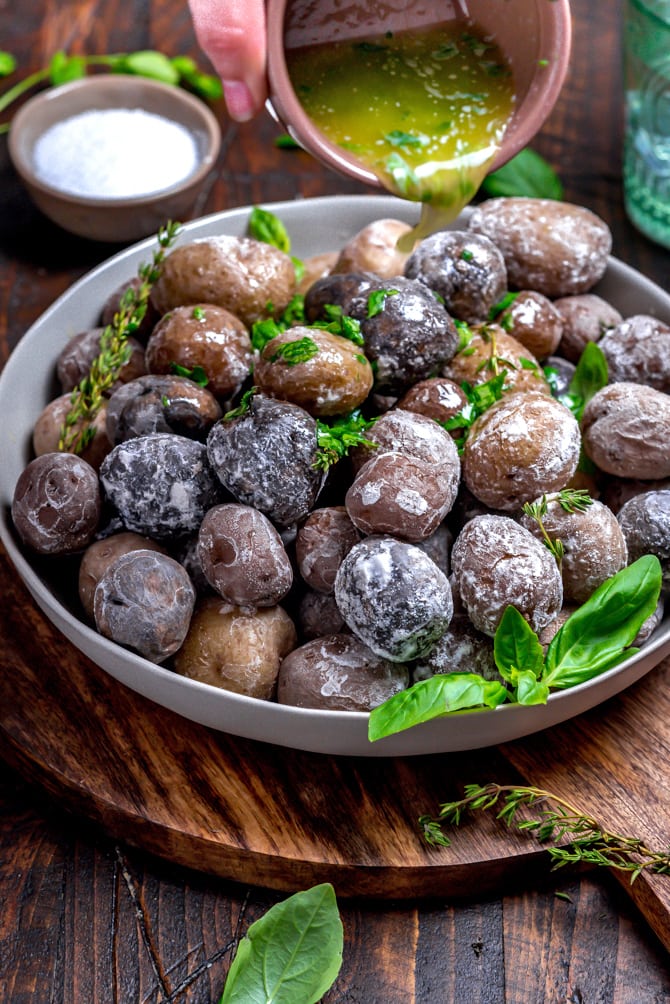 WHAT ARE SYRACUSE SALT POTATOES?

Sure, the name makes it seem pretty straight-forward: Syracuse Salt Potatoes are salty potatoes from Syracuse– of course— but for such an incredibly simple dish, there’s actually a lot to learn about them.

Syracuse, New York got its first big influx of European settlers due to the fact that it was “The Salt City”– nicknamed for the big, salty brine springs on the southern side of Onondaga Lake. By the mid-1800s, salt production had grown into a prosperous industry in Syracuse. The increasing need for salt workers drew in poor, often illiterate Irish immigrants who had used their only money to buy the $50 passage to America following The Irish Potato Famine. These workers would take the salt water from the springs and boil them in giant cauldrons in order to evaporate the water, leaving behind the salt.

Eventually, the workers began to bring bags of bite-sized potatoes with them to work for lunch and toss them into the salt brine cauldrons, boiling the potatoes in their skins. When the potatoes were scooped from the boiling water, they developed the thin crust of salt around the skin that made them into an iconic Syracuse dish.

It isn’t until you’ve drained the potatoes of their salty water and watched as the sparkly, salty crust developed; then dunked or doused them in butter and herbs and bitten into their tender centers that you realize that Syracuse Salt Potatoes are so much more than just salty potatoes. They’re the absolute perfect iteration of boiled potatoes. There’s no question. 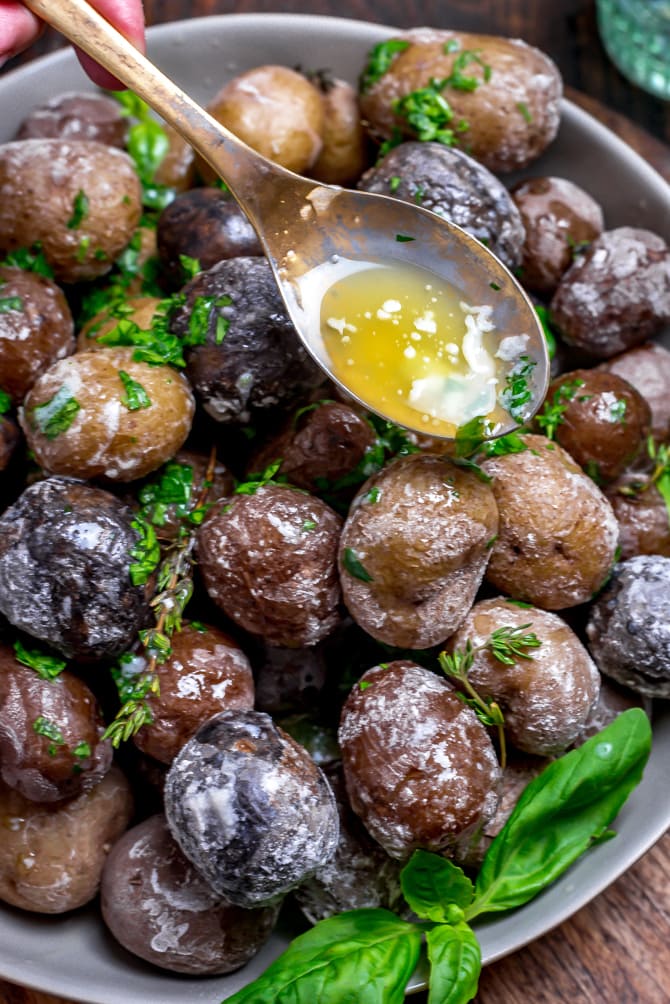 THE SCIENCE BEHIND SALT POTATOES

What makes the salt crust happen? The same thing that allowed salt workers to process the salt brine in boiling cauldrons in the first place– evaporation. As the water evaporates, it leaves behind the salt, which clings to solid surfaces (such as the pot or the potatoes).

But the salt crust isn’t the only interesting thing that happens when you boil potatoes in a pot of extremely salted water. The skin also shrivels and becomes delicate as the salt dries out and thins the skins of the potatoes. And most interestingly (and deliciously): The potatoes flesh becomes incredibly, almost unbelievably creamy inside. Believe it or not, they even taste more potato-y. 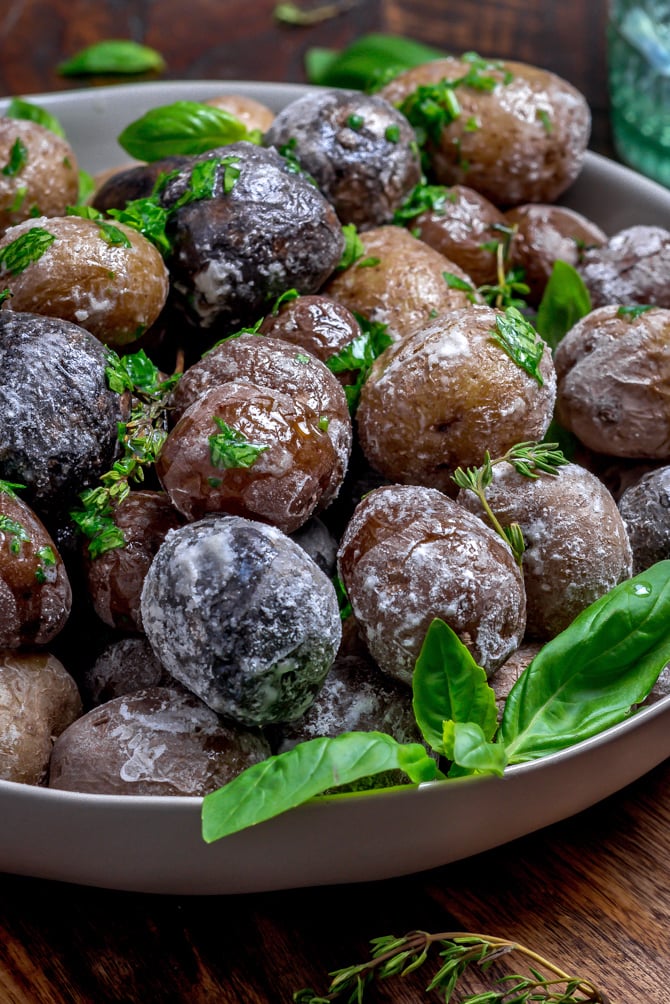 TIPS FOR HOW TO MAKE THE BEST SYRACUSE SALT POTATOES

Syracuse Salt Potatoes require just four ingredients– less if you want to leave out the herbs. (Or more if you count water as an ingredient. I don’t. To each their own.)

All you need is butter, potatoes, salt, and herbs. Er, and water. The fifth maybe-it-counts-as-an-ingredient ingredient. The point is, it’s pretty easy. However, you need to make sure you get the right stuff.

Let’s talk potatoes. There are tons of them out there, but for this recipe you really need bite-sized baby potatoes. If you want your Salt Potatoes to be as authentic as possible, you want to get tan-skinned potatoes, as red-skinned potatoes aren’t traditional. That being said, I’ve tried making them with multiple types of potatoes and I’ve found that, as long as you use new potatoes, you’ll get good results. The smaller, the better.

Don’t be tempted to buy bigger potatoes and cut them before boiling, or you’re in for a world of saltiness. Remember, the skin keeps all of that salt from being absorbed by the potato’s flesh, which means once you slice them, there’s no saving them.

Also, don’t wait for all of the water to evaporate and to see the salt crust to take your potatoes out of the pot. The crust will appear– like a magic trick– while the potatoes sit in the colander. Leave them in too long and you’ll wind up with a salt crust so thick, no one will be able to stomach them. Not even the most dedicated of salt lovers, like myself.

Follow those tips and there’s honestly no way you can go wrong with these! 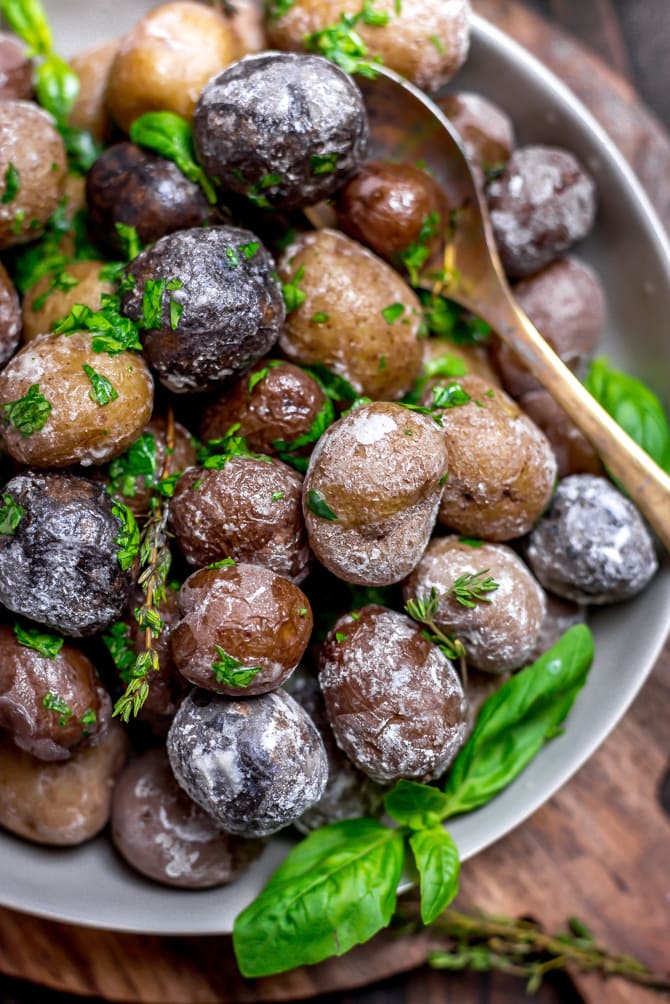