With a whisper of smoke and spice, Warm Chorizo Potato Salad is a Mexican-inspired spin on the German classic. Served with soft-boiled eggs and a chorizo vinaigrette, this mayo-free mash-up is best served warm. 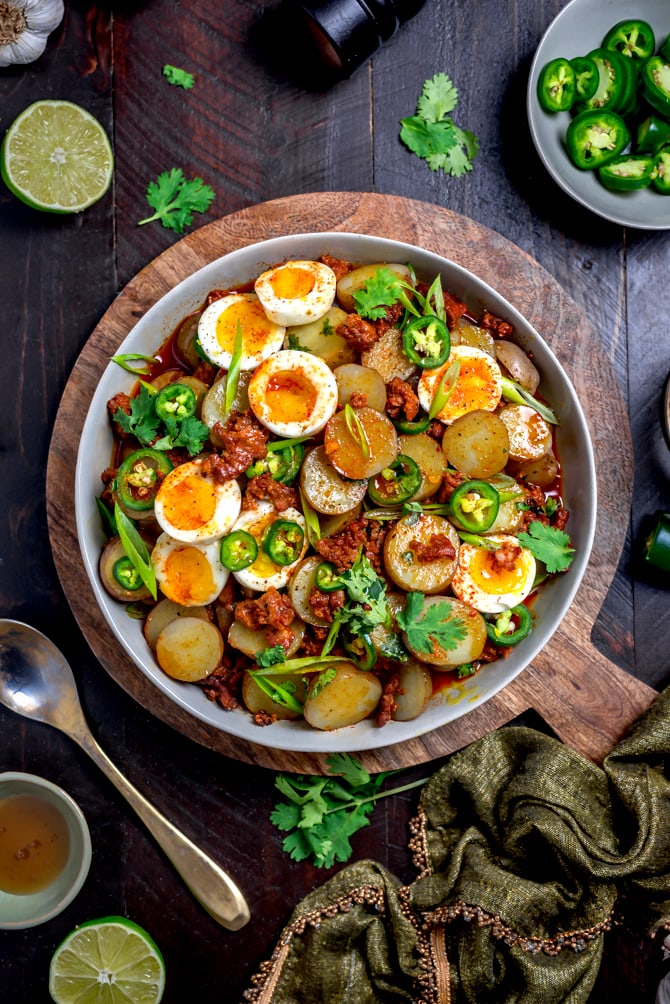 When most people hear “potato salad”, they think of the American picnic classic. You know, potatoes, relish, celery, mayo…

But originally, mayonnaise had no place in potato salad at all. Long before potato salad ever found its way to the United States, it was invented in Germany after Spanish explorers returned to Europe hauling barrels of spuds as souvenirs.

By the mid-19th century, the dish had made its way to America with its quintessentially German combination of mustard, bacon, onion, and vinegar, and it was deservedly well-loved. It wasn’t until the 1920s – shortly after home refrigerators came into fashion – that mayo came into the picture and we started serving the concoction cold.  In my opinion, that was a major misstep in food history. Go ahead and quote me on this– Potato salad is a dish best served warm.

That’s not to say that no changes should ever be made to the original– I’m all about tweaking the classics to create something new and exciting, and that’s definitely the case with this Warm Chorizo Potato Salad. In this recipe, we’re taking potato salad back to its warm, vinegar-dressed roots, but with a Mexican-inspired spin. In this version, crumbled chorizo takes the place of bacon and the drippings are used to create a vinaigrette that takes the potatoes to the next level. 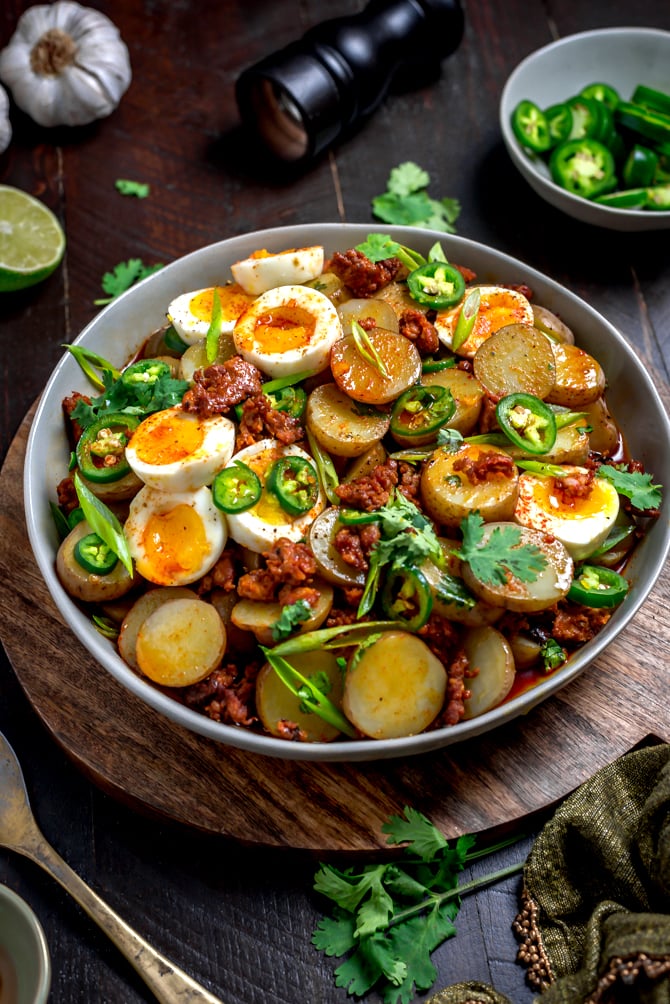 One of my major qualms with potato salad is that it tends to be tossed with flavorful ingredients while the potatoes themselves remain bland and boring. The key to preventing this– and getting a potato salad that’s flavorful all the way through– is getting the potatoes to drink up the vinaigrette.

The same concept holds true to other starchy ingredients like pasta, which will absorb flavor if tossed in sauce while they’re still on the stove so the pasta can suck up some of the sauce to flavor itself. It’s all about the warmth. Dressing your potato salad while the ingredients and chorizo vinaigrette are still hot ensures that instead of just resting on the surface, some of your vinaigrette will soak into the potatoes themselves. The result is flavor that bursts from every bite instead of simply dripping off your fork or settling in the bottom of the bowl. 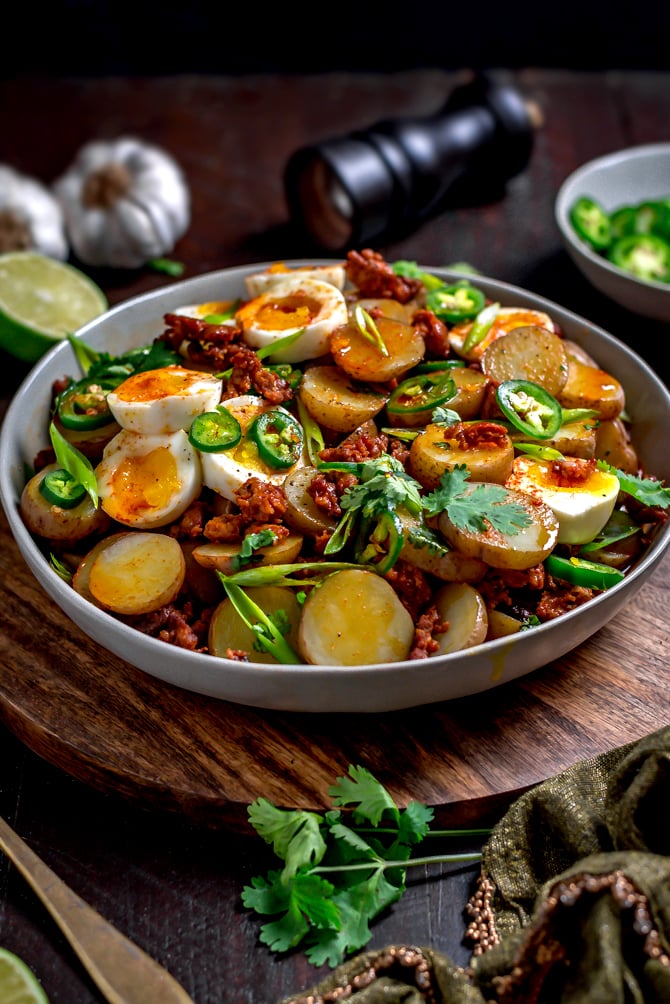 Don’t get me wrong, there’s always room for mayo in my fridge; it’s great for creating a perfectly moist chocolate cake or a cheater’s “aioli” to slather on sandwiches. But in general, it’s truthfully far from my favorite of ingredients. That’s especially true in the summer heat, when a mayo-slathered side dish has been known to turn stomachs. I definitely don’t want anything mayo-y sitting out in the sunshine or packed into my picnic basket.

Not to mention, tossing freshly-cooked potatoes in mayo is likely to end in a melted, oily mess. Opting for a flavorful vinaigrette instead will leave you with a potato salad that tastes great at any temperature and won’t get passed over at the potluck. 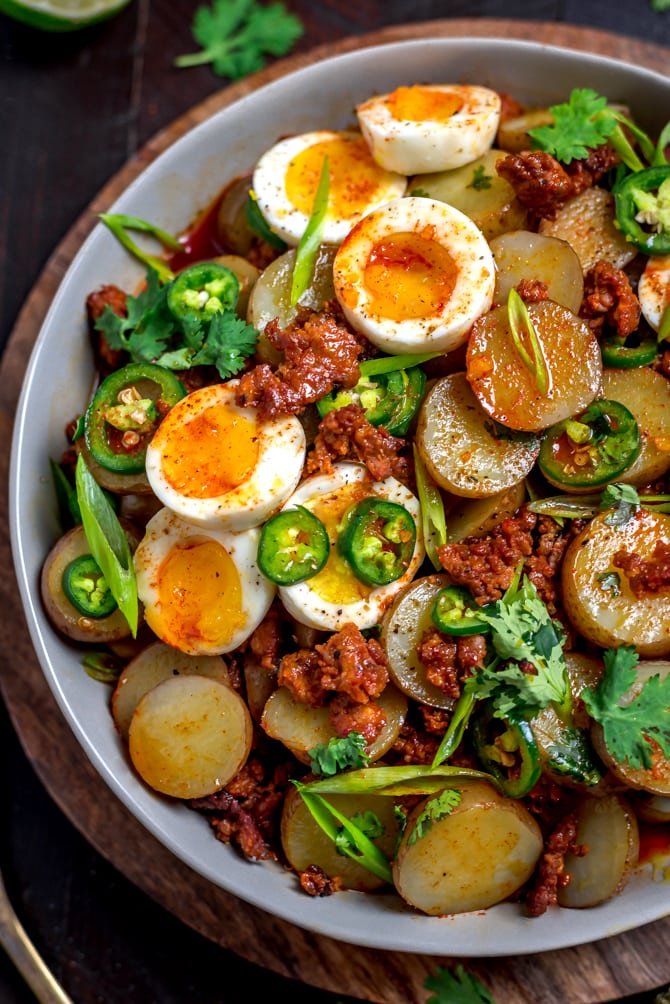 CHORIZO BRINGS THE PARTY (I MEAN, THE FIESTA)

If you’ve ever visited this blog, you know not to question my love affair with bacon, but in this recipe, even the most loyal bacon-lover will agree that chorizo is its perfect match.

Chorizo does more than enhance the dish’s Mexican flavor profile. Fatty and smoky like bacon, but with the added flavors of ground chiles and other seasonings such as cumin, coriander, and clove, chorizo brings a greater depth of flavor to the table. Not just in the crumbles themselves, but the drippings to create the vinaigrette.

While chorizo is not hard to find, be sure to look out for the variety you buy; the Mexican chorizo we use in this recipe is typically made from fresh, raw pork with vinegar and chile, while Spanish chorizo is often smoked with garlic and paprika. While both versions are delicious, all pork is not created equal, and in this case, the unique flavors are not interchangeable.

Chorizo will come in casings, but to cook it, you’ll want to slice open the casings with a knife and crumble the chorizo into a skillet. When it’s dark reddish-brown, crisp, and crumbly, it will be ready to toss in the potato salad– but not before straining out the rendered fats to form the vinaigrette! 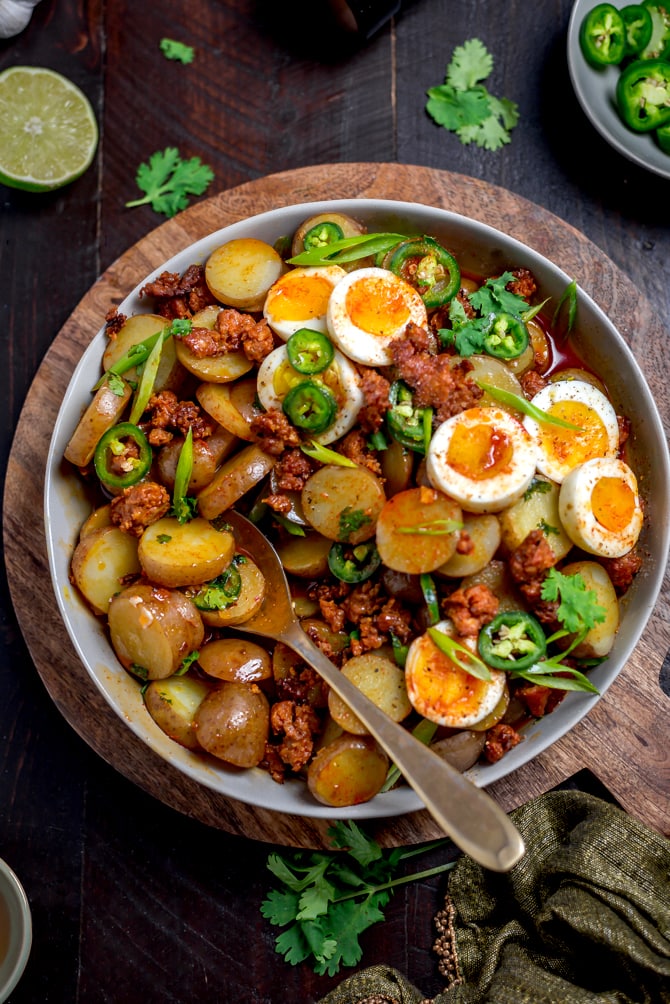