This Make-Ahead Mashed Potato Casserole is a holiday miracle. Cooked in herbed half-and-half and topped with fried sage, you’ll swoon over the crispy-yet-creamy texture as much as all of the avoided last-minute stress. 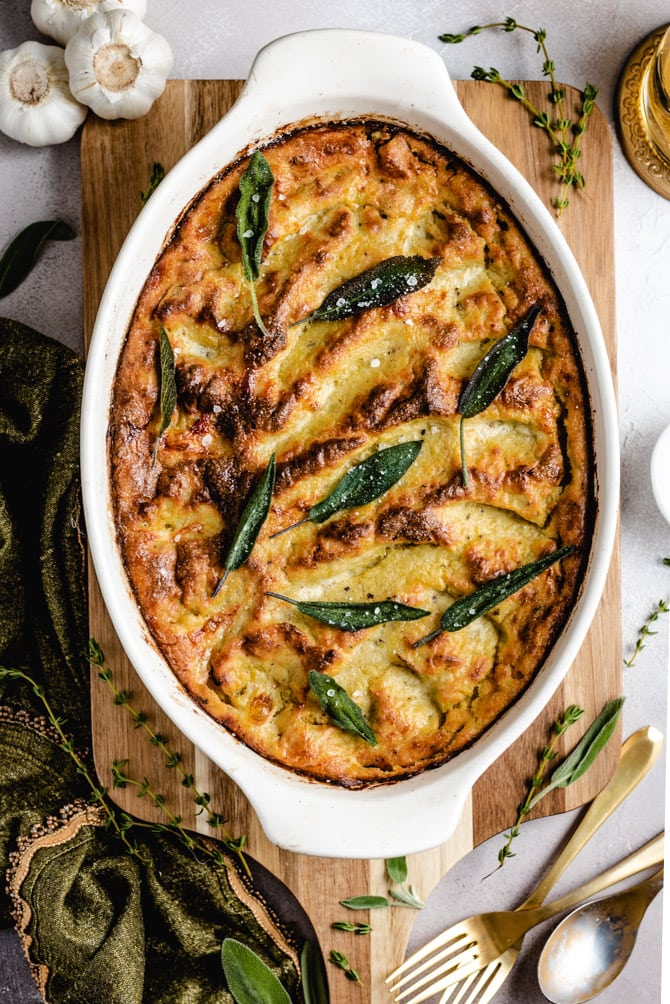 I spend 150% of the holiday season stressed out because time management is not the strong suit of the over-ambitious and perfectionists. That’s especially true when it comes to Thanksgiving, because who can really be sure that their turkey will be finished at the same time as the mashed potatoes, stuffing, rolls and green beans? NOT I. Not usually.

Naturally, a reliable make-ahead recipe is an absolute godsend (because when you don’t have to scramble around at the last second, hosting sure goes a whole lot smoother), but unfortunately, most traditional Thanksgiving foods tend to wither and die when you cook them ahead of time.

Stuffing? Soggy. Turkey? Don’t even think about it. Mashed potatoes? Thanks but no thanks. OR SO YOU THOUGHT.

So I thought too, until I discovered a few recipes for “Duchess Mashed Potato Casserole” around the web. A modern and more practical take on “Pomme Duchesse” (you know, those fancy little piped mashed potato bites), turning make-ahead mashed potatoes into casserole means they reheat like an absolute dream. With a few small tweaks, I was able to come up with a recipe I actually prefer over the regular “real thing”. That’s right, I said it: I like this Make-Ahead Mashed Potato Casserole MORE than regular mashed potatoes. By a landslide, actually.

Flavorful and creamy with a crisp, browned crust, the dish is as satisfying on its own as it is topped with your favorite gravy.

The secret? There are a few actually, but luckily for you I’ve never been great at keeping secrets. 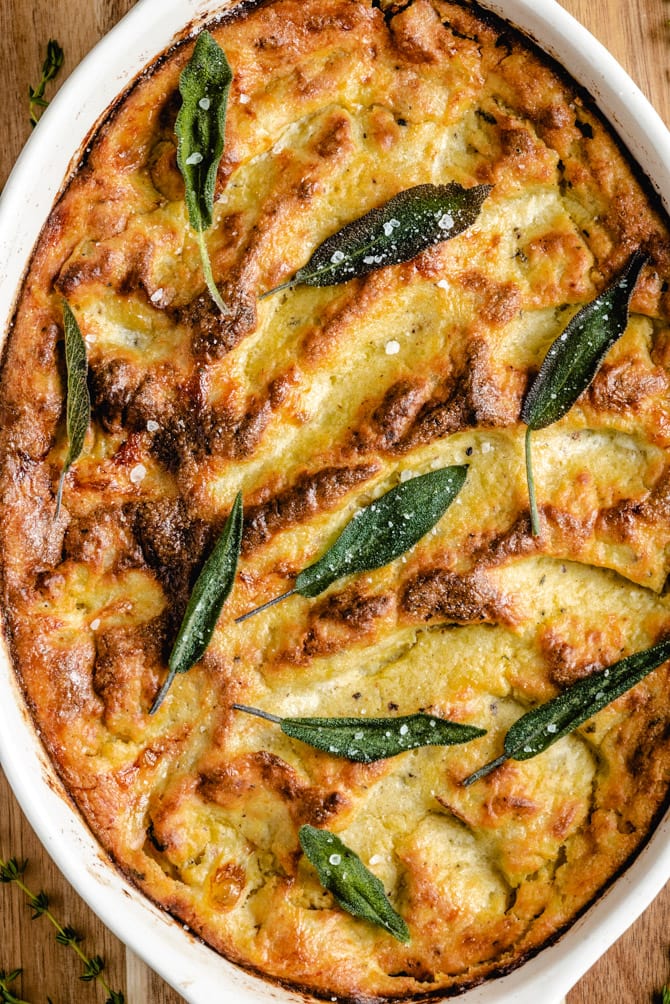 IT ALL STARTS WITH THE PERFECT MASHED POTATO BASE

Mashed potatoes are not like salad; you don’t just toss it all together and mix. The base you choose and the way you combine your ingredients make all the difference when it comes to nailing that blissfully smooth texture. Here’s how to pull it off:

For a rich and tasty mashed potato, most of us turn to dairy. Cream, butter, and maybe even some shredded cheese. But would you believe me if I told you that eggs are the secret to this tasty and freezer-friendly dish?

Because of their relatively low water-to-fat content, egg yolks add richness without watering down your potatoes.

They’re also emulsifiers (#science) which seem to keep the liquid ingredients from separating as you cool, refrigerate, and reheat the dish. Not sold on it yet? Well, as they say, “the proof is in the pudding”, or in this case, the potatoes. 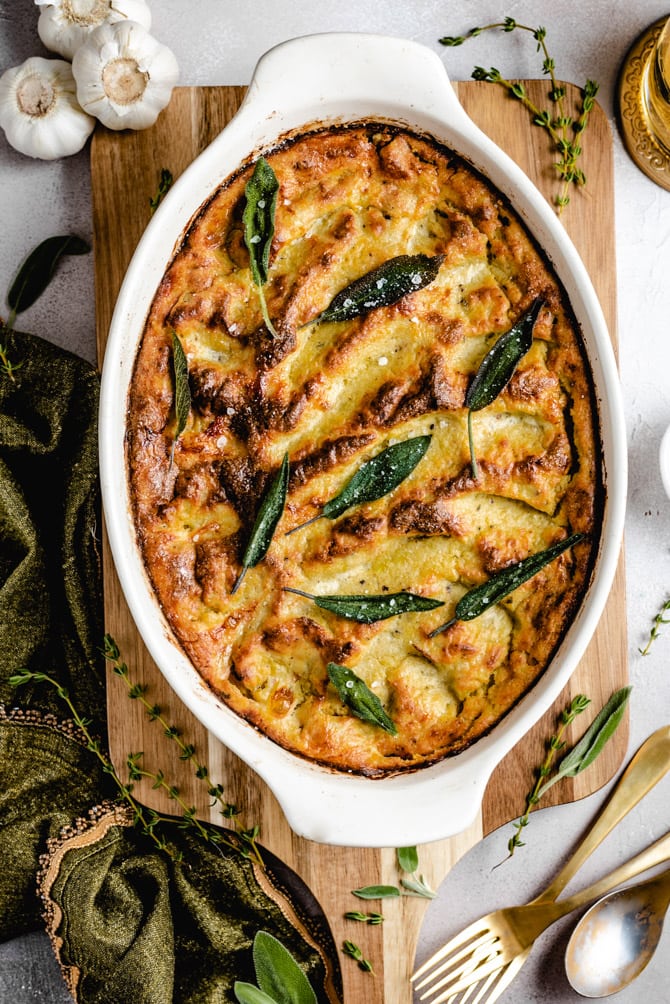 THE GOLDEN BROWN TOP IS (MAYBE) THE BEST PART

You know how people go crazy for creme brulee? It’s not the sugar. In my opinion, it’s the satisfaction of cracking into a crispy, caramelized top and scooping up a spoonful of custardy goodness. That heavenly texture pairing is a multi-sensory experience, and basically culinary Nirvana.

It really doesn’t get much better – until you add butter and garlic.

What I’m trying to say is that if you love crispy-meets-creamy, Make-Ahead Mashed Potato Casserole is as good as it gets. Because while the egg yolks add richness to the interior, the egg whites (plus butter) encourage the top to brown and crisp for ultimate savory satisfaction.

HOW LONG IN ADVANCE CAN I MAKE THE MASHED POTATO CASSEROLE?

There are three ways to store this dish depending on how much time you need. Mashed Potato Casserole is best enjoyed after its first bake; so if you’ve got oven the space but not the time, prepare the casserole as instructed and stop once you smooth the potatoes into the baking dish.

If you’re making this recipe 1-2 days before Thanksgiving, go ahead and pop it in the fridge before you finish it off in the oven. Need more time? It will keep in the freezer up to 2 weeks.

If your oven is truly overbooked though, go ahead and fully cook your casserole. If I’m being honest, I’ve reheated these leftovers 5 days later and it was (almost) as good as the original. 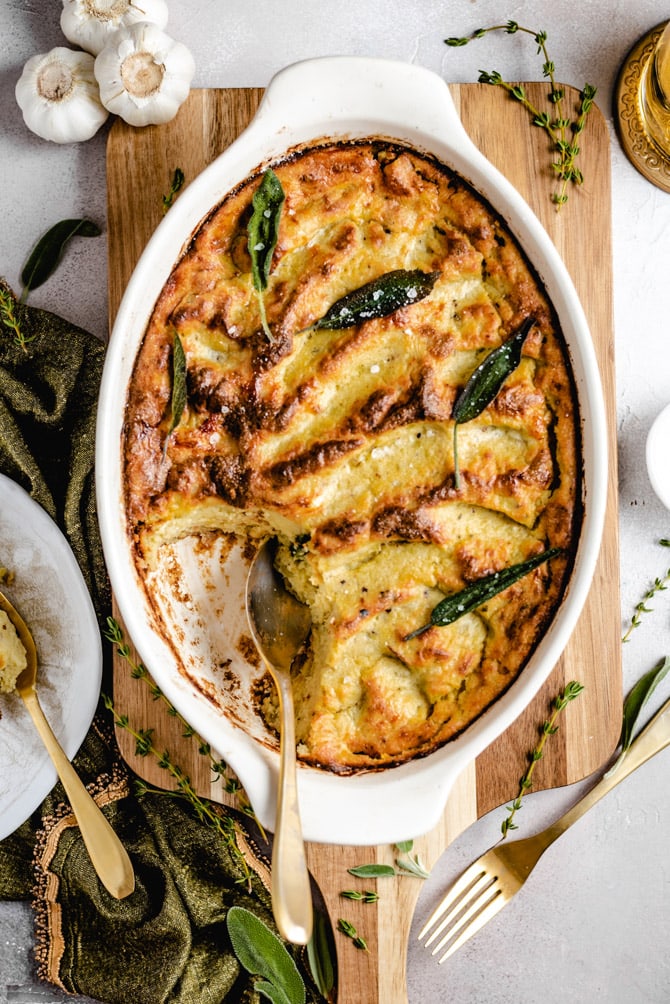 While the half-and-half is seasoned in recipe, adding some background notes to the mashed potatoes, the flavors of the garlic and herbs don’t come through very intensely (as to not overpower the dishes on your holiday table). However, if you want to kick it up a bit, you can easily add in some mix-ins for an extra boost.

Some of my favorite mix-ins include extra minced garlic, chives, cheddar, and goat cheese. However, you could easily get ultra-creative with it. Almost anything that normally pairs well with potatoes will do fine mixed up into this Make-Ahead Mashed Potato Casserole!

MORE RECIPES YOU CAN MAKE AHEAD FOR THE HOLIDAYS