With classic fajita ingredients piled high in crispy cheddar-adorned tortillas and finished with a 3-ingredient chipotle crema, this recipe is bound to be your new Tex-Mex favorite. Crispy Cheddar Chipotle Chicken Fajitas make for an easy, flavor-packed, and picky-eater-approved weeknight dinner. 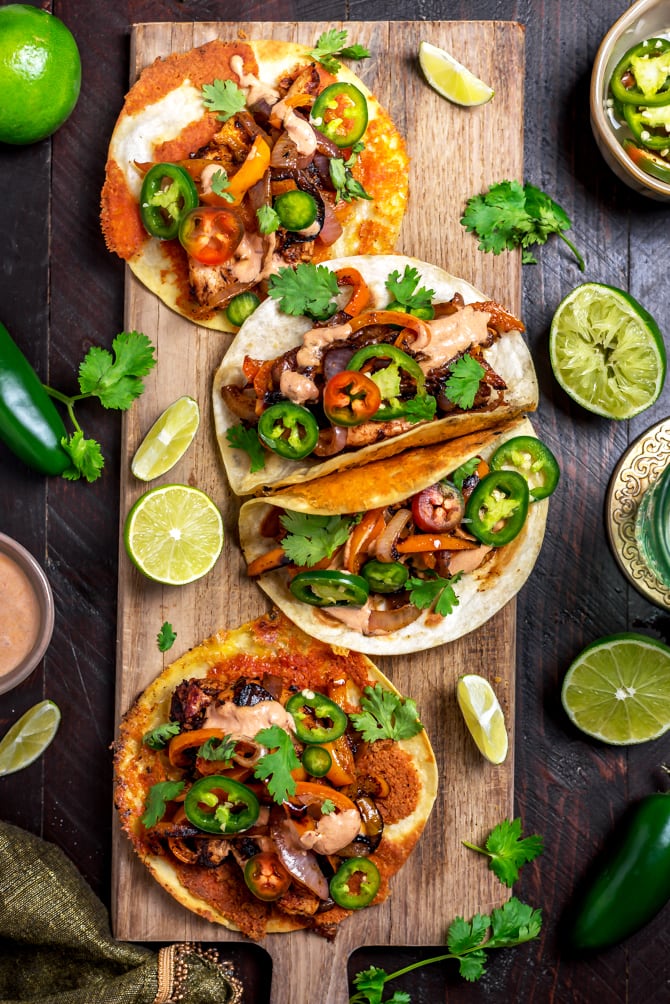 I know that I do this whole food blogging thing for a living, but just like anyone else, I prefer not to spend the entirety of my weekdays making meals. To me, the perfect weeknight dinner should be easy, flavorful, fast, not too guilt-inducing (because I certainly can’t be eating Loaded Juicy Lucy Sheet Pan Sliders every night…), and require very little clean-up. AKA I want a wonder-dish.

And if any recipe is a wonder-dish recipe, it’s fajitas. Specifically, these Crispy Cheddar Chipotle Chicken Fajitas, which don’t require a ton of prep or marination, and are made all in one skillet in less than an hour.

The seared strips of seasoned chicken, lightly charred bell pepper and onion, jalapeno slices, and a smoky chipotle crema all come together in crispy cheddar-crusted tortillas that your family will beg you to add to the weekly rotation.

(So much for Taco Tuesday, how about Fajita Friday, right?) 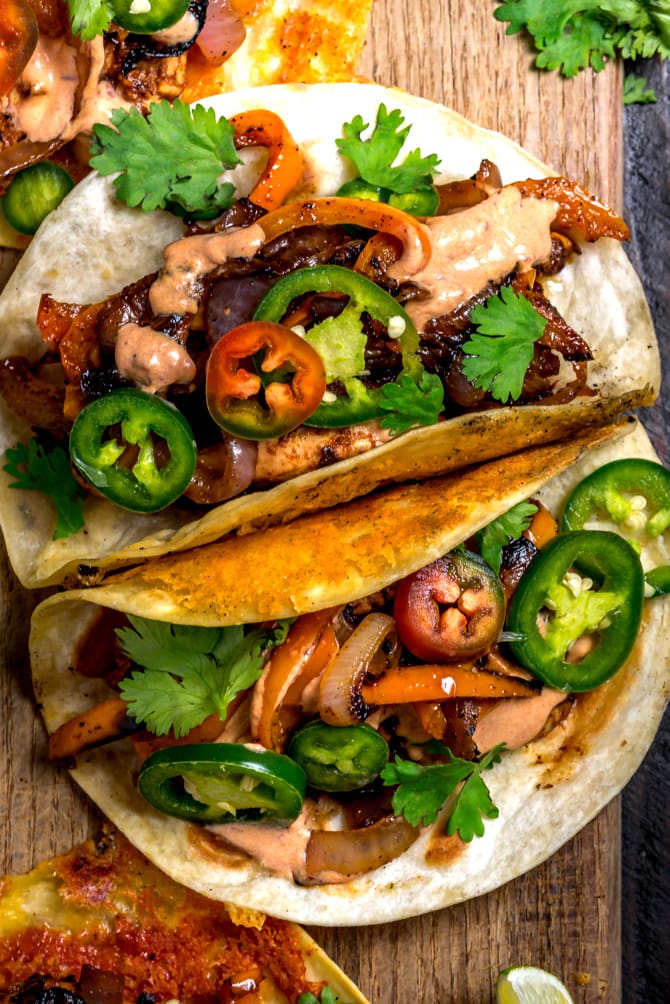 The sauce, veggies, and chicken are all delicious, but the true star of this recipe is the “frico-style” cheese taco shells.

Not sure what “frico” is? If you’ve ever made nachos in the oven, you know that the best part is the burnt cheese that drips off the tortillas and crisps up on the sheet pan. If you lust after that crispy cheese the same way I do, JUST IMAGINE making a huge circle of burnt cheese, peeling it off of the pan, and folding it into a taco shell. Ahh, heaven. I did pretty much exactly that in my Frico Egg Breakfast Tacos, and I use it as the basis of my cheddar shells here. However, this time, there’s a tortilla thrown in for extra stability and substance. You can’t have fajitas without warm flour tortillas, after all.

The best part is, the crispy cheddar shells take almost no extra effort. The Chipotle Chicken Fajitas are prepared the traditional way, but instead of simply scattering cheddar cheese on top, it’s sprinkled directly onto the skillet, melted, and then topped with a tortilla that’s pressed down until the cheese browns and adheres. The result is a crispy, chewy (not rubbery) tortilla with a crunchy layer of cheddar on top, which you can then top with the fajita ingredients or eat facing outward so you get a direct cheese-to-tongue connection. 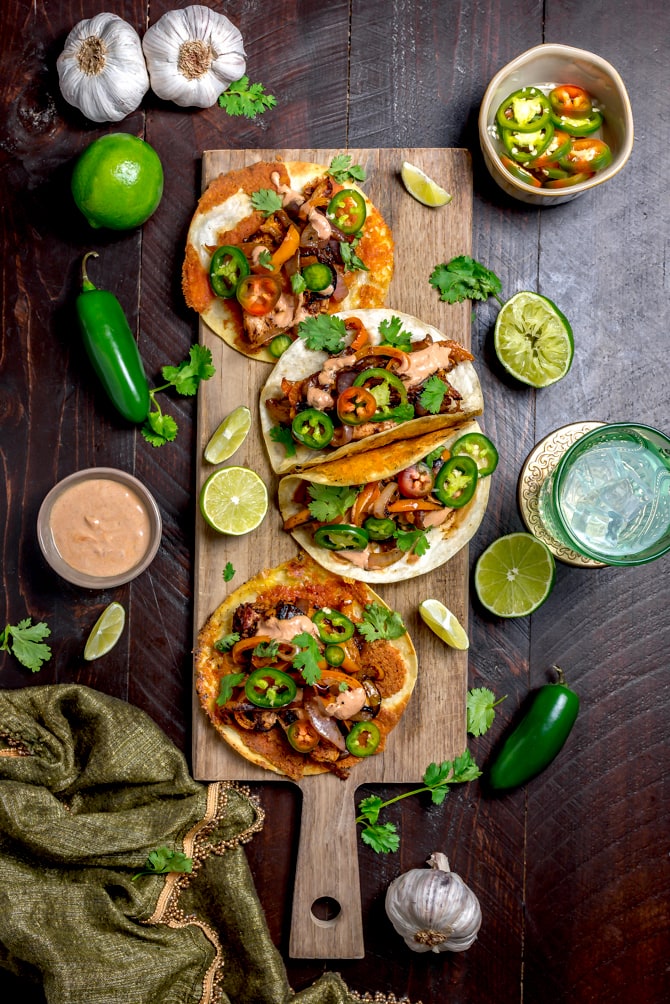 CHIPOTLES IN ADOBO BRING THE HEAT (AND THE SMOKE)

The crispy cheese in this recipe isn’t the only thing worth getting excited about. The serious flavor in these fajitas comes from another ingredient: chipotles in adobo. Chipotle peppers are dried, smoked jalapenos that add heat and, obviously, smokiness to Mexican and Tex-Mex recipes. They can be found canned in adobo sauce in the International aisle of most major grocery stores.

For this recipe, I finely chop a chipotle pepper and add it to the chicken for a good kick. Meanwhile, I take a couple of tablespoons of adobo sauce from the can and mix it with sour cream and lime juice to create a chipotle crema. Adobo sauce on its own is tangy and slightly sweet, but after canning with chipotles it takes on their heat and smokiness as well. All together the simple sauce adds layers of flavor to the finished fajitas! 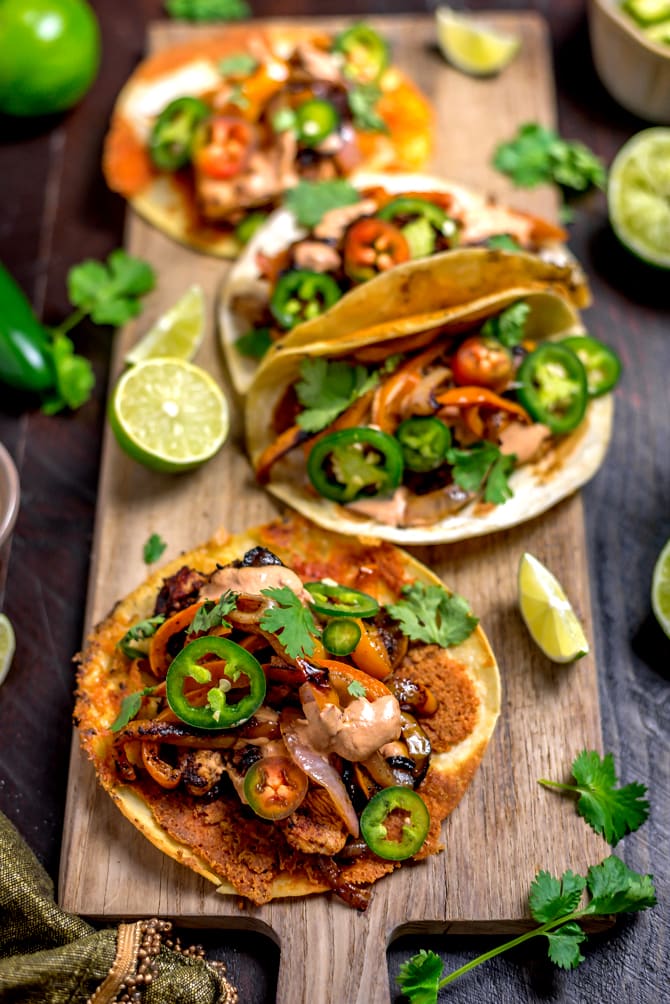 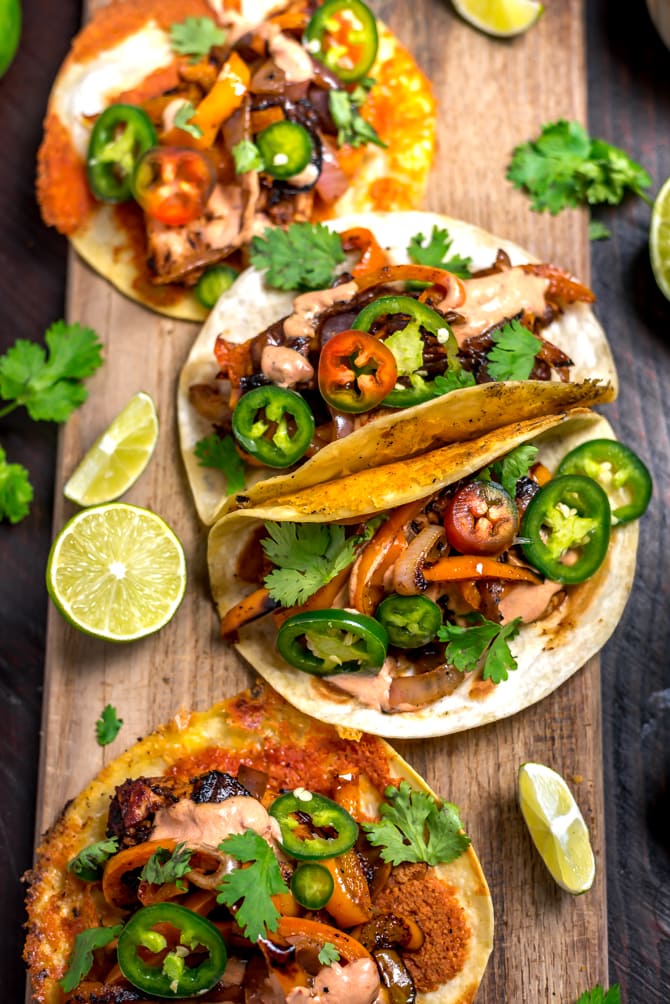