5 Minute Garlicky Tahini Sauce is a traditional Middle Eastern sesame seed based sauce that’s tangy, nutty, creamy, and silky smooth without any help from dairy. The secret that makes this recipe the best (and easiest)? Blending a whole, unpeeled head of garlic with fresh lemon juice. It sounds weird, but if you read on you’ll understand why! 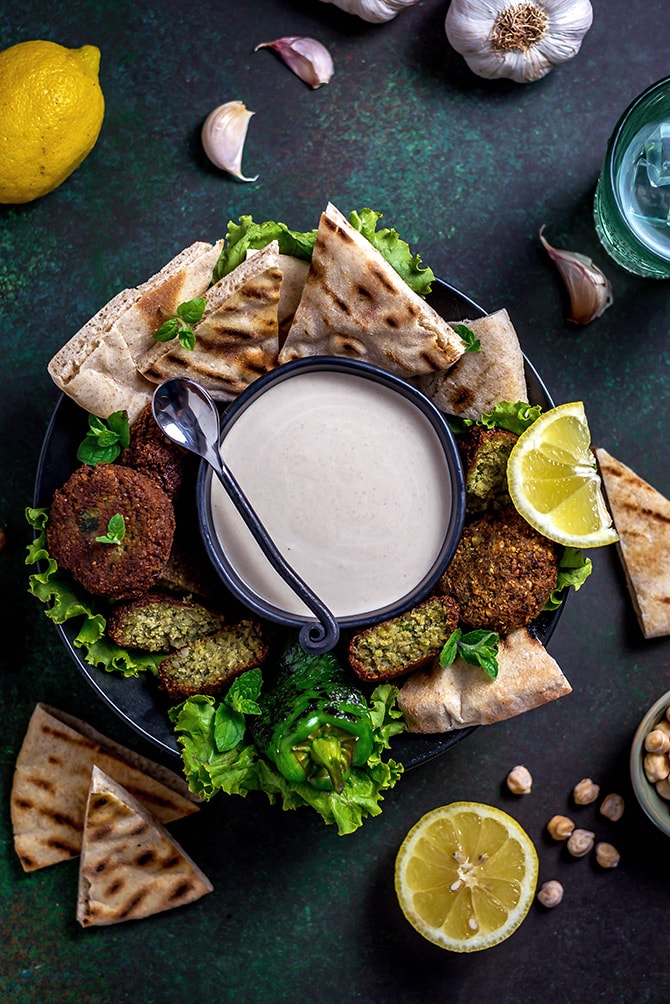 In case the craze somehow hasn’t spread to your corner of the world, let me tell you: Middle Eastern food is having a moment. Flavors from the region (which includes cuisines like Israeli, Persian, and Lebanese) have taken over food halls. We’ve gone collectively nuts for za’atar and halloumi. And of course, this year’s “outstanding restaurant” at the James Beard Awards was none other than Philadelphia’s Zahav.

Middle Eastern dishes are often marked by fresh, wholesome, and aromatic flavors, and 5-Minute Garlicky Tahini Sauce is no different. A traditional Middle Eastern sauce bursting with bright lemon and mild garlic, this Zahav-inspired Tahini Sauce can be served on anything from falafel to kebabs to shawarma to your usual grilled chicken or fish, as well in classic dips like hummus and baba ghanoush.

Like many recipes from the region, it’s naturally dairy-free making this sauce coincidentally vegan, paleo, Whole30 and keto-approved.

Best of all, this zippy sauce comes together from just 5 ingredients (6 if you count water) making it as simple as it is satisfying. 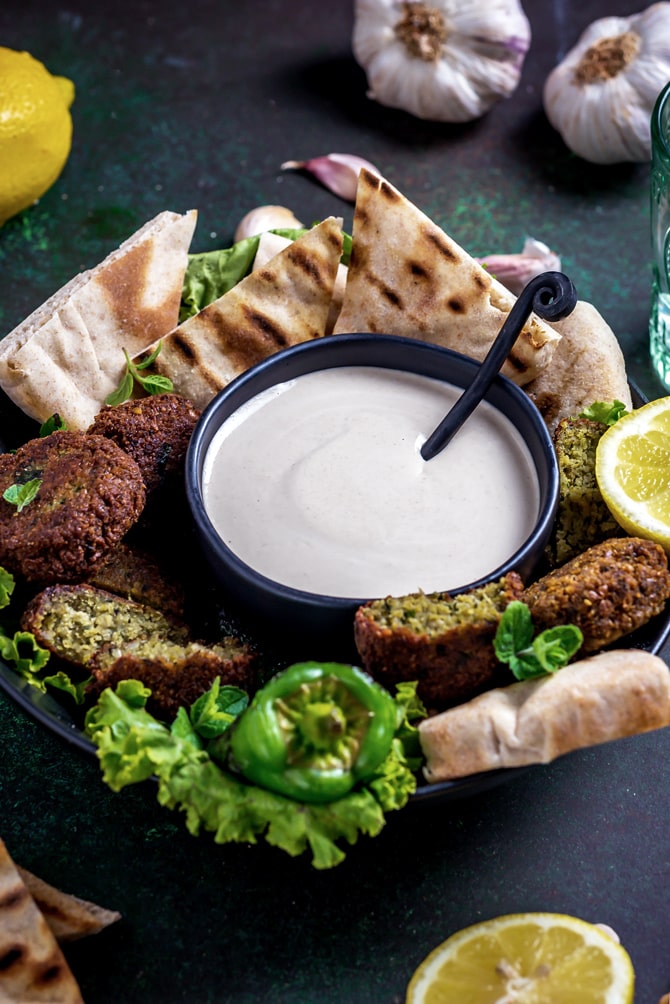 What is Tahini Sauce?

Tahini sauce is — surprise, surprise — made from tahini. But the two are not one in the same. Tahini itself is an earthy, nutty, and slightly bitter paste made from ground sesame seeds. Similar in texture to natural peanut butter, it serves as a satisfying foundation for various sauces and dips.

One of the most common (and by far, my favorite) uses for tahini paste is tahini sauce. While some ingredients and preparations vary, this 5-Minute Garlicky Tahini Sauce contains only the tahini, fresh garlic, lemon juice, water, ground cumin, and salt– and that’s all it needs to be perfect.

You’ve likely tried tahini sauce before if you’re familiar with Arabic or Israeli dishes, as tahini sauce (and just plain ol’ tahini paste in general) is so tied to the cuisine of the Middle East. It’s the beige-colored sauce you usually get with your falafel or shawarma, and it’s also one of the main components in hummus. (Just add chickpeas!) 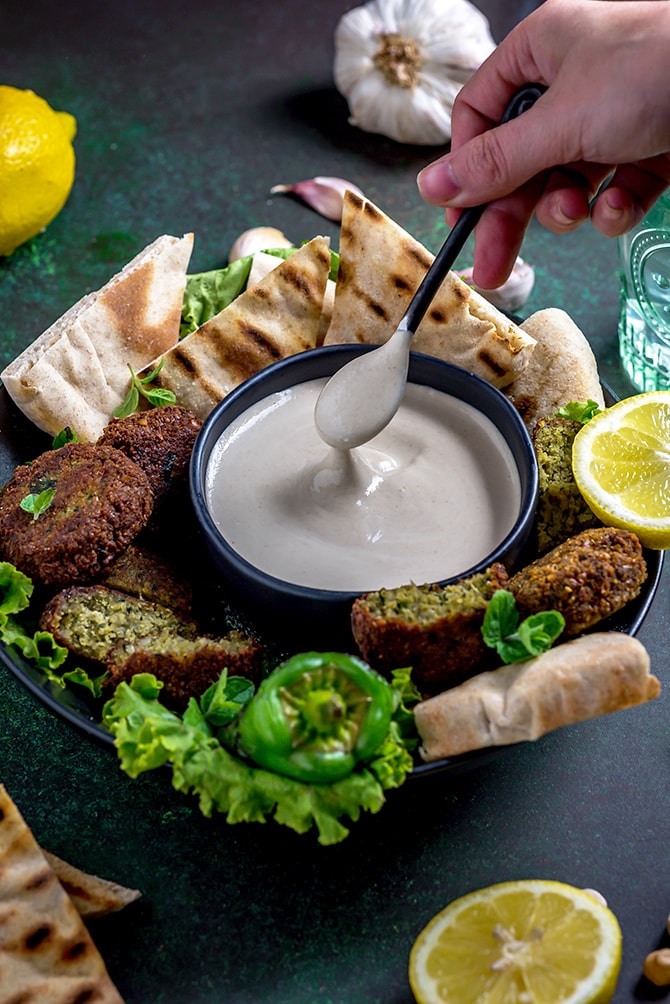 How to Make Homemade Tahini Sauce

Making Homemade Tahini Sauce is so quick and easy that it could almost be a one-sentence recipe. You simply pulse unpeeled garlic and lemon juice in a food processor, run it through a mesh strainer, and finally whisk in tahini, ice water, and spices.

But quick and easy does not equal foolproof. As with many simple recipes, following directions is key to avoiding a major Pinterest fail. In the case of Homemade Tahini Sauce, there are three details to keep in mind: 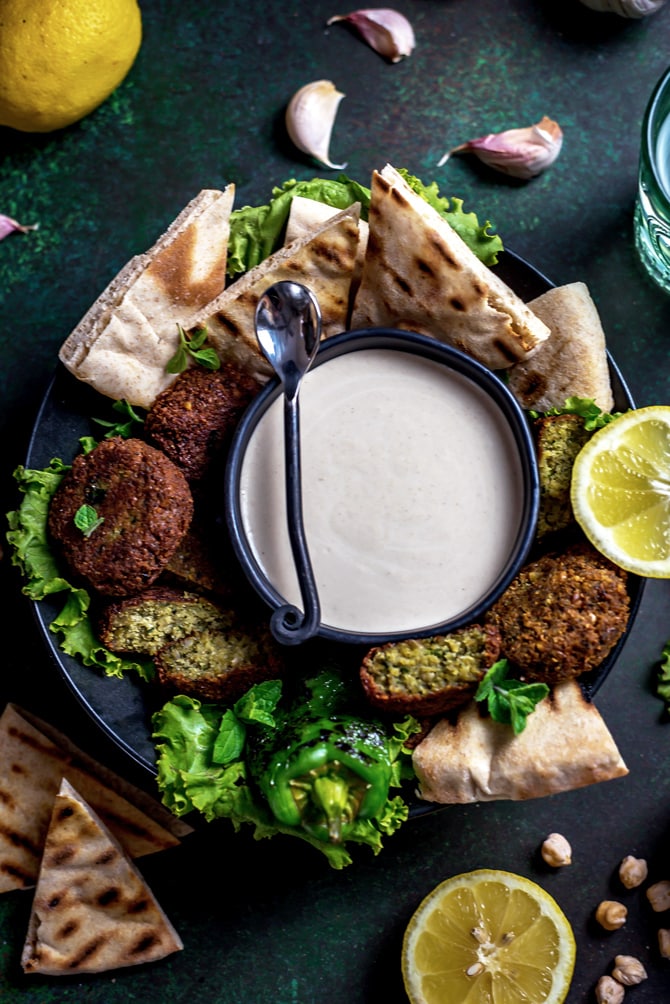 Why Use Unpeeled Garlic?

I can already feel the eyebrows raising, but if you don’t trust me, trust Michael Solomonov. The legend behind restaurants like Zahav and Dizengoff is a master of Modern Israeli food, and literally wrote the book on it.

While using unpeeled garlic may seem counter-intuitive to achieving a creamy sauce, never fear — you’ll strain out the paper and pulp anyway. But saving time isn’t the only perk to leaving your garlic intact.

As I hinted earlier, there’s a bit of a magic trick happening behind the scenes of this tahini sauce. When you blend the whole cloves with lemon juice, it ignites a chemical reaction that neutralizes allicin (AKA the chemical that gives garlic its pungent flavor.) What you end up with is lemon juice that has a beautifully mild garlic flavor, minus the bite. 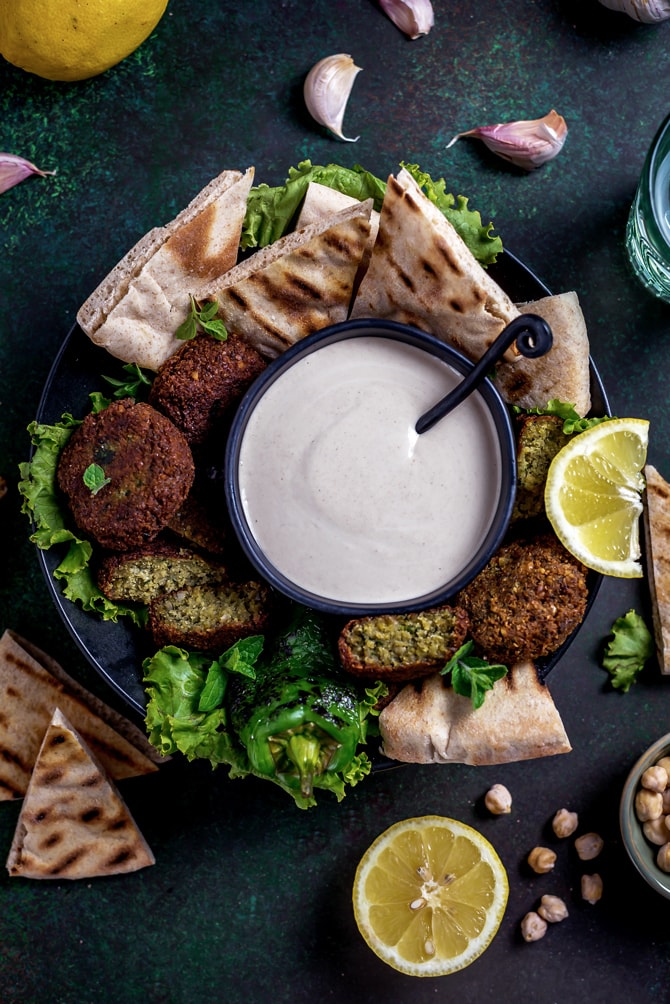 How to Use 5-Minute Garlicky Tahini Sauce

While snacks like hummus and falafel have been on the scene for a while, the wider spectrum of Middle Eastern offerings might still feel a little mysterious. But don’t be intimidated! Most of the flavors layer beautifully, making them nearly foolproof to mix-and-match. And tahini sauce can easily be used even beyond your typical Middle Eastern dishes. 5-Minute Garlicky Tahini Sauce is particularly delicious when…

Used as a dip / spread for:

Adapted from the Zahav cookbook by Michael Solomonov