This super easy-to-make summer side dish beats store-bought pasta salad any day. Loaded up with Mediterranean flavors, Greek Pasta Salad with Sun Dried Tomato Vinaigrette is bright, zesty, and delightfully briney. Best of all, it’ll come together quicker than you can say “Opa!” 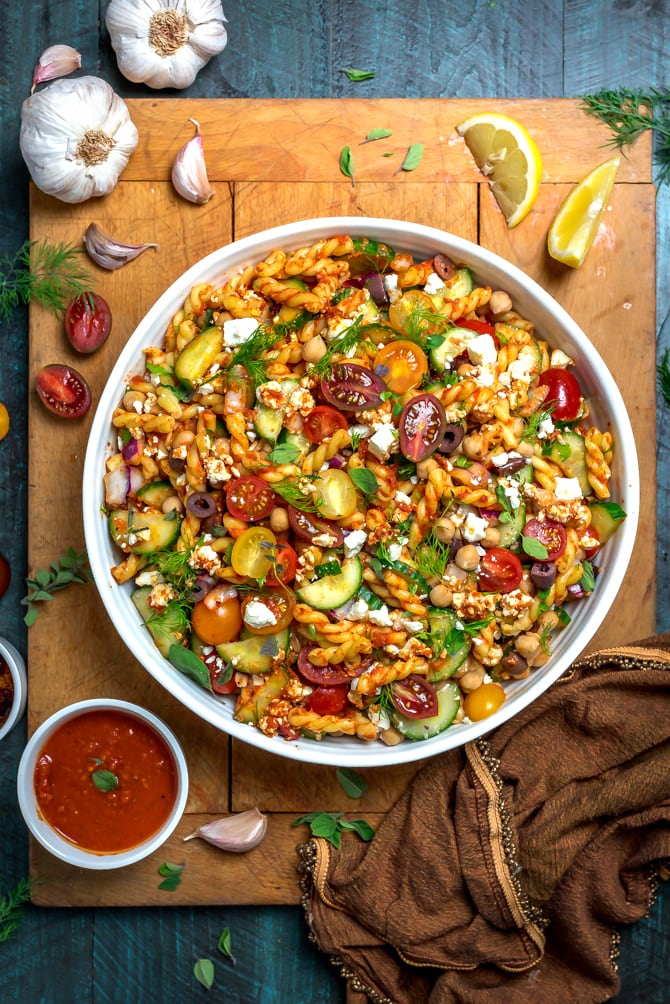 If you caught my recent recipe for Warm Chorizo Potato Salad, my apologies; I’m dusting off the same soapbox to advocate for another mayo-free side dish.

For me, a zesty vinaigrette trumps mayo every time, which makes pasta salad my instant go-to whenever there’s a potluck to prep for. That being said, store-bought dressings might bother me even more than mayo-soaked sides– their flavor just isn’t as intense as all of those delicious pasta salad mix-ins deserve. Luckily, making your own flavor-packed dressing is ridiculously easy to do at home in just a few minutes. And in this Greek Pasta Salad recipe, the Sun Dried Tomato Vinaigrette is worth every second of effort. It’s exactly what makes the difference between a bland barbecue side dish and a rockstar recipe with repeat requests!

But I’ll let you in on a secret…this recipe is not just magical because it seems to vanish from the bowl before you make it back with a serving spoon. It’s also incredibly easy to make– and with busy summer schedules, that is exactly the kind of recipe what we need. 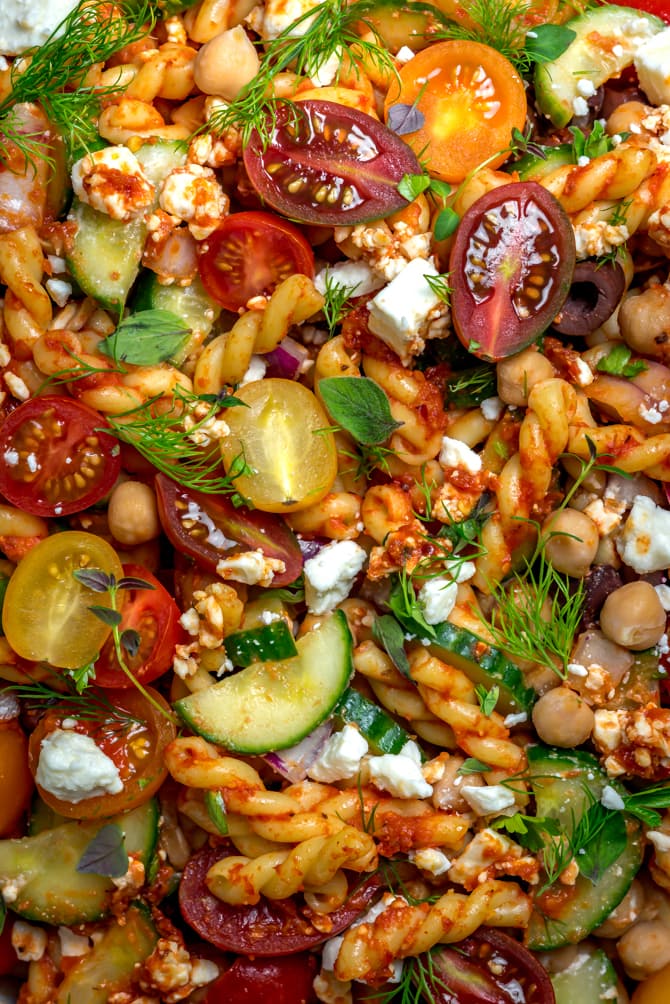 Where I live in New Jersey, it’s easy to find amazing Italian ingredients. I’m talking the best salami and pepperoni on the market, beautiful fresh Italian cheeses, and the most amazing olives you could ask for. In fact, I use them in my pasta salads all the time– especially my Antipasto Tortellini Pasta Salad. That being said, there’s only so many times a summer that I can bring an Italian pasta salad to a cookout to sit amongst 3 other Italian pasta salads that somebody else decided to bring. The market on Italian pasta salads is OVERSATURATED, you guys.

So while I mean no disrespect to my Jersey Paesan’s, I’m of the opinion that Italian pasta salad has had its moment. I think it’s time we showed some love to the other side of the Mediterranean.

Greek Pasta Salad is where it’s at.

Not only do Greeks know their way around a carb (the average Greek eats 11kg of pasta every year vs Americans’ 9kg), but they also have tons of amazingly fresh and flavorful ingredients at their disposal that can stand up to all of that starch. Ingredients like cucumber, tomatoes, kalamata olives, and feta cheese meld perfectly in pasta salad for a salty, punchy, and refreshing dish. 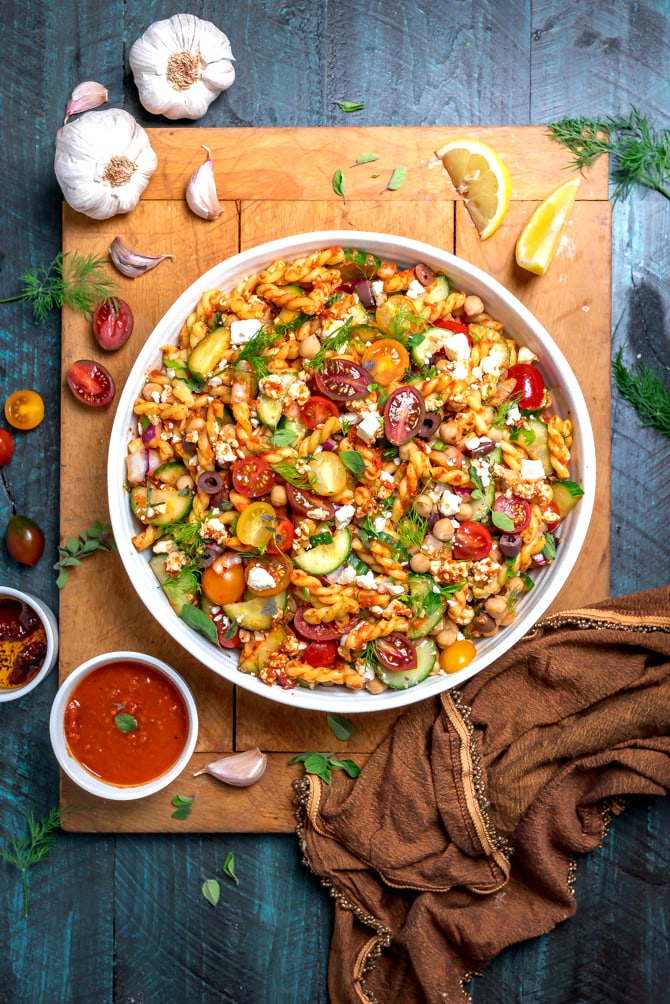 IT’S OKAY TO SKIP THE MEAT

As I mentioned above, Italian pasta salad tends to be loaded up with pepperoni and salami and all of those delicious things that makes it not so vegetarian friendly– which really is a shame considering summer cookouts tend to already be pretty meat-focused (hello hamburgers, hot dogs, ribs, and steak!)

And while I’m definitely in Camp Meat-Eater, it’s sometimes nice not to serve your grilled sausages against a side dish that’s filled with cured sausages, you know? There’s no need to overdo it.

That’s why I love Greek Pasta Salad. With all of the bold Greek flavors in the mix-ins, plus a garlicky vinaigrette packed with sun dried tomatoes, you don’t miss the meat for a second. And if you happen to have a few vegetarians at your next get-together, I’m sure they’ll appreciate it! 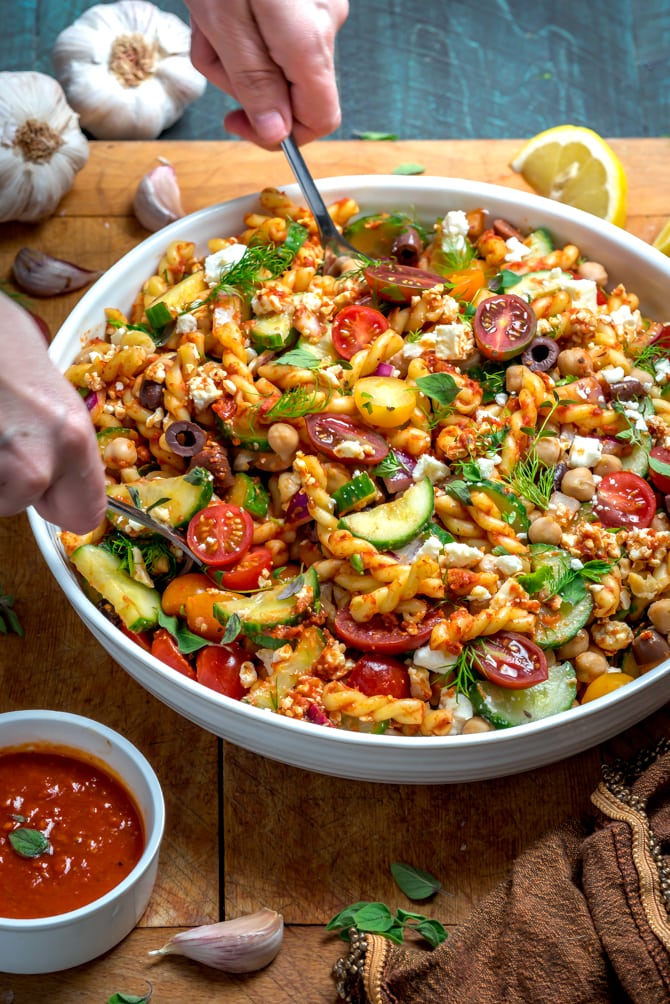 I won’t beat around the bush. This Sun Dried Tomato Vinaigrette is better than anything you’ll find in a bottle. Full stop.

The average store-bought dressing is formulated to last 12-18 months unopened, so I don’t think I need to tell you that making vinaigrette at home means more flavor with fresher ingredients and no preservatives. But it does. It means a lot more flavor.

In the case of this Sun Dried Tomato Vinaigrette, that robust flavor comes from two kinds of acid, a ton of fresh garlic, red pepper flakes, dried oregano, and sun dried tomatoes– but that’s not it. The real secret is to ditch traditional, unflavored olive oil (which is usually used in vinaigrettes) in favor of the oil your sun dried tomatoes were packed in. Just drizzle that in there, and a quick whirl in your food processor or blender is all that’s standing between you and the taste of summer in Santorini. 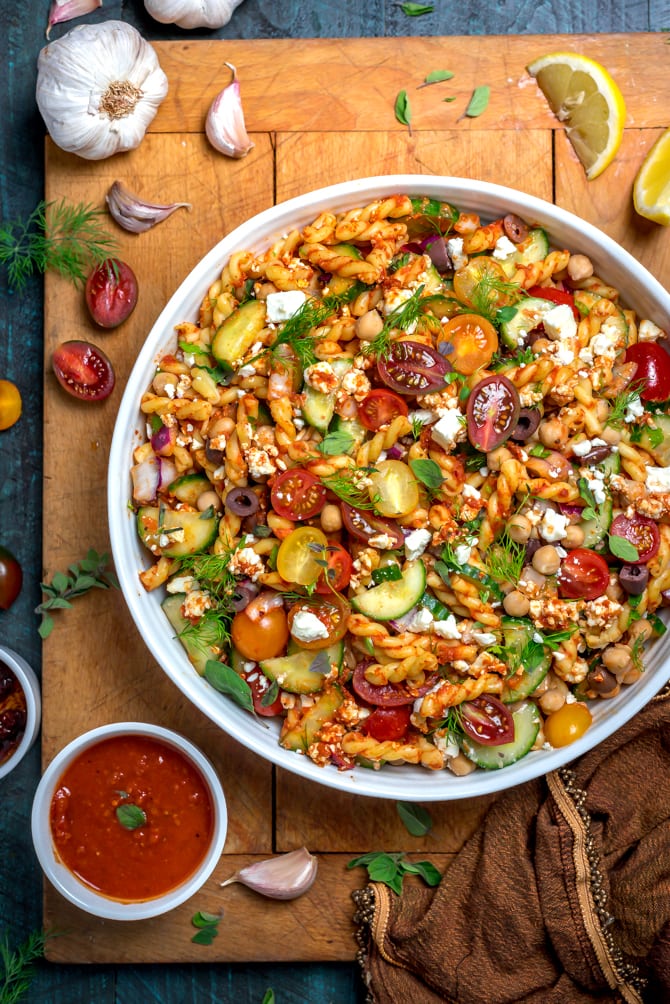 THIRTY MINUTES IS ALL IT TAKES

When I said creating this pasta salad takes less time than a supermarket run, I meant it. Thirty minutes, to be exact, including prep time, pasta-cooking, and dressing assembly.

Staying in to watch Spartacus in your joggers? GREEK PASTA SALAD.

There’s really no occasion when a 30-minute meal isn’t welcome, so be prepared to whip this recipe out all summer long. 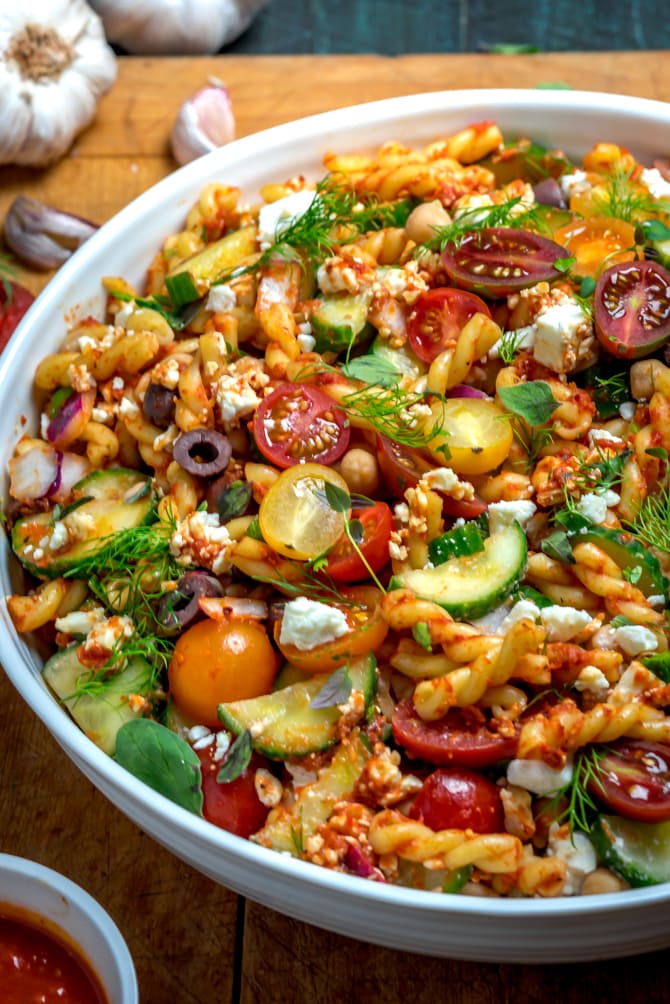 MORE OF THE BEST SUMMER SIDES